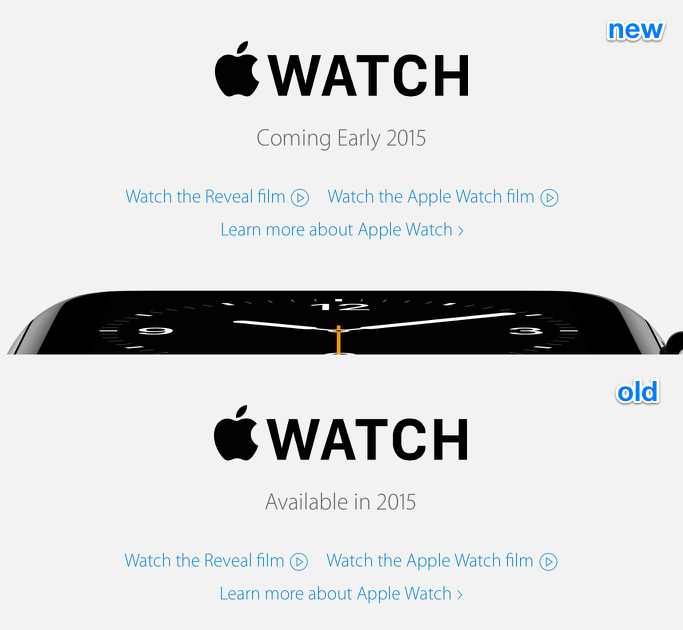 Update: Apple has reverted all of these changes listed below. Aside from the US site, the respective pages for all other regions now say that Apple Watch will be ‘Available in 2015’ again. The change to early 2015 seems to have been a mistake.

Apple’s online pages for Apple Watch have today been updated with a slightly narrower timeframe for several European countries. Previously, whilst the US site stated ‘Coming Early 2015’, localized pages in the UK and other regions were less concrete, simply stating that Apple Watch would be ‘Available in 2015’.

This has now changed for several European countries, including the UK, France, Spain, Germany and Italy. Leave a note in the comments if you catch any more affected countries. The change means that these region-specific pages now mirror the US pages (after translation) with the ‘Early 2015’ timeframe. It is still possible the Watch will see a staggered release, but at least the rollout is now confirmed to be relatively tighter.

The latest rumors indicated that the Apple Watch will be launched in the US by Valentines Day, in February. It is not inconceivable to imagine a situation where the device launches exclusively in the US in February, followed by a wider European rollout in March, for instance. This would easily qualify as an ‘early 2015’ launch. It is also possible that the Watch launch in multiple regions simultaneously. Official news about the launch dates should come out soon, if indeed the Watch is coming out in the US in February.