Microsoft will give away Windows 10 … just like OS X 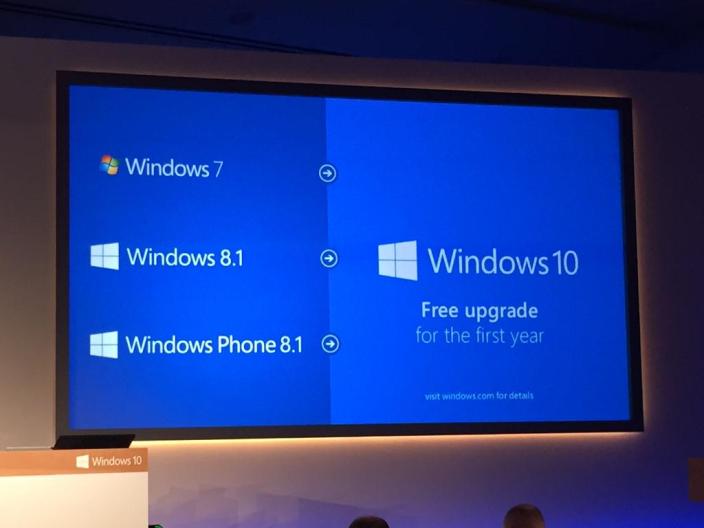 Microsoft announced today at its Windows 10 briefing that it will make the next major version of its operating system free for consumers. Windows 10 will be a free upgrade for for the first year for Windows 7, Windows 8.1, and Windows Phone 8.1 users. Users who upgrade will continue to have access to the latest versions for free when using the same device. For comparison, Apple has offered updates to each of its software updates, including major operating system versions, for free since 2013 with the release of OS X 10.9 Mavericks for the Mac.

In addition to announcing Windows 10 pricing details, Microsoft demoed early builds of its virtual assistant, Cortana, running on desktop computers with early builds of the next Windows update. While Apple beat Microsoft to the free desktop software update game by a long shot, OS X 10.10 Yosemite is behind these  early builds of Windows 10 in regards to featuring a voice assistant as Siri is currently limited to devices running iOS like the iPhone, iPad, and iPod touch.

In the past, Microsoft has relied on the differences between Siri and Cortana to promote phones running their Windows Phone operating system (while the Surface has also been heavily compared to the MacBook and iPad), so expect to see this play out in future ads as well until Apple brings Siri to the Mac.

Microsoft also announced a new web browser aside from Internet Explorer dubbed Project Spartan with the company’s Cortana voice assistant baked in. Much like Safari, though, the Project Spartan browser introduces a queue for reading articles from the web including offline—aptly named Reading List.

Windows 10 to be free? That would be newsy.