Kantar World Panel’s Carolina Milanesi has crunched the numbers and notes that iOS beat Android in the US in the holiday quarter with a hefty .1% margin — iOS devices accounted for 47.7% of sales, Android devices accounted for 47.6%. Apple’s iOS beat Android in other key markets including Japan and Australia but still trailed in others in Europe and China.

“In the US, Apple iOS overtook Android for the first time since this time in 2012, albeit by the slimmest 0.1% margin,” reported Carolina Milanesi, chief of research at Kantar Worldpanel ComTech. “While the success of the iPhone 6 and 6Plus is unprecedented, this quarter’s performance also points to Apple having its strongest portfolio ever. With a range of devices available at different price points in both contract and pre-pay Apple was able to take advantage of a weaker Android offering at the premium end of the market.”

Apple’s iOS hasn’t led Android in a quarter in Kantar’s US numbers since the holiday 2012 quarter. Year over year in the US, iPhone was up 3.8%, while Android was down 3.8%.

The question on everyone’s minds, notes TechCrunch, is if Apple can keep up the momentum as HTC and Samsung release new flagship phones this month.

Kantar also noted that along with the iPhone being the “most gifted” phone for the holidays in the US, the iPad was the most gifted tablet this holiday quarter. Shocker. 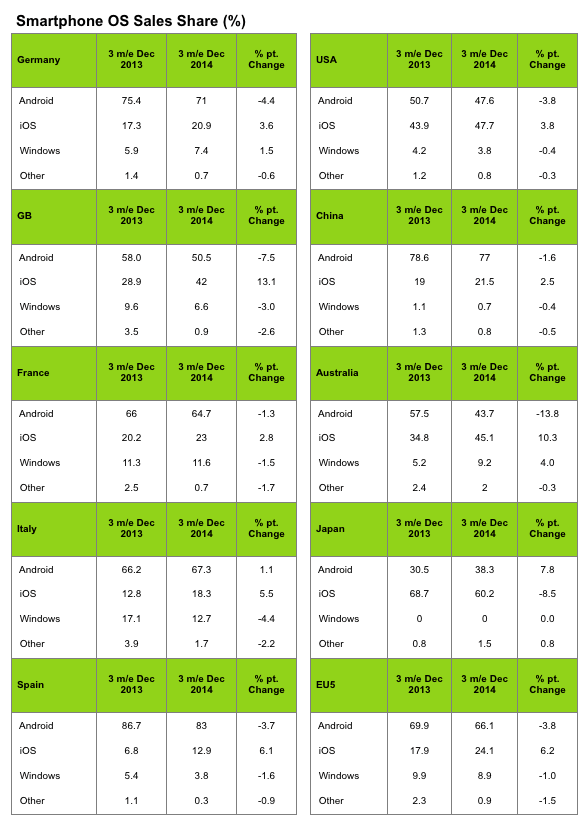