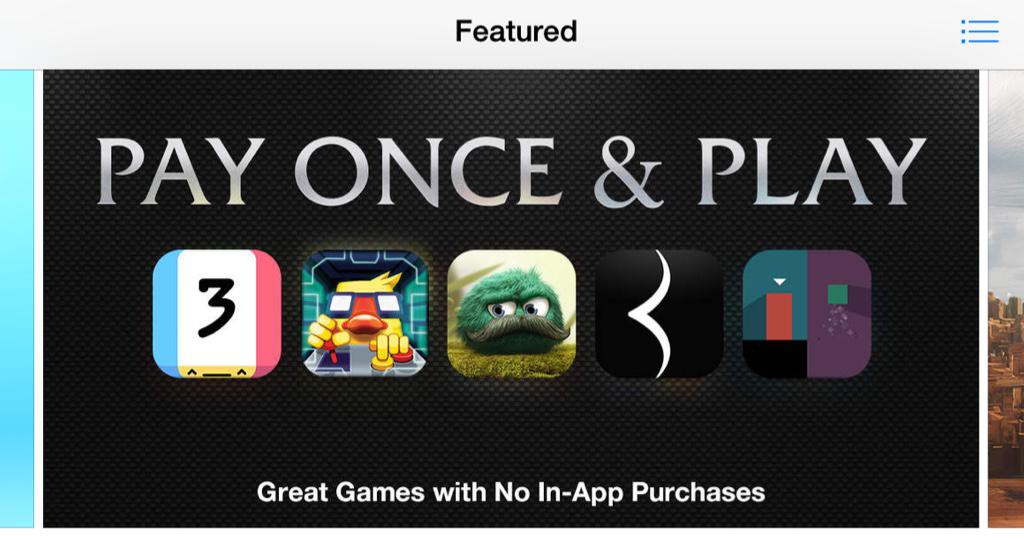 As part of Apple’s weekly App Store refresh, the company is currently highlighting iOS games for the iPhone, iPad, and iPod touch that are paid apps with no in-app purchases, MacStories points out. The featured section is notable as in-app purchases have been a source of confusion and frustration for many consumers since their introduction despite being an added revenue source for developers and Apple.

Apple has made a number of moves to help its customers avoid issues that spring from the use of in-app purchases, especially in games, both at the request of various government agencies and on its own.

Most recently, Apple moved to change the way app prices are presented to users in its App Store.

Specifically, apps which were previously accompanied by a download button labeled free began showing labels saying “Get” to avoid presenting “freemium” apps with in-app purchases as totally free to use.

More broadly, Apple has faced class action lawsuits from consumers and disputes with the United States Federal Trade Commission over issues surfacing from the use of in-app purchases within free apps.

Apple also prominently displays an In-App Purchase explainer at the bottom of the front page of the App Store, added in 2013, which highlights parental controls available in iOS to disable making in-app purchases and more.

While the featured section could become a permanent part of the App Store, Apple often uses the space to for one-off collections of apps without refreshing them.

Aside from issues with accidentally spending and misleading marketing over in-app purchases, though, some customers simply prefer the experience of paying upfront for an app and not worrying about needing to unlock more content later, which this week’s App Store feature also serves to address.