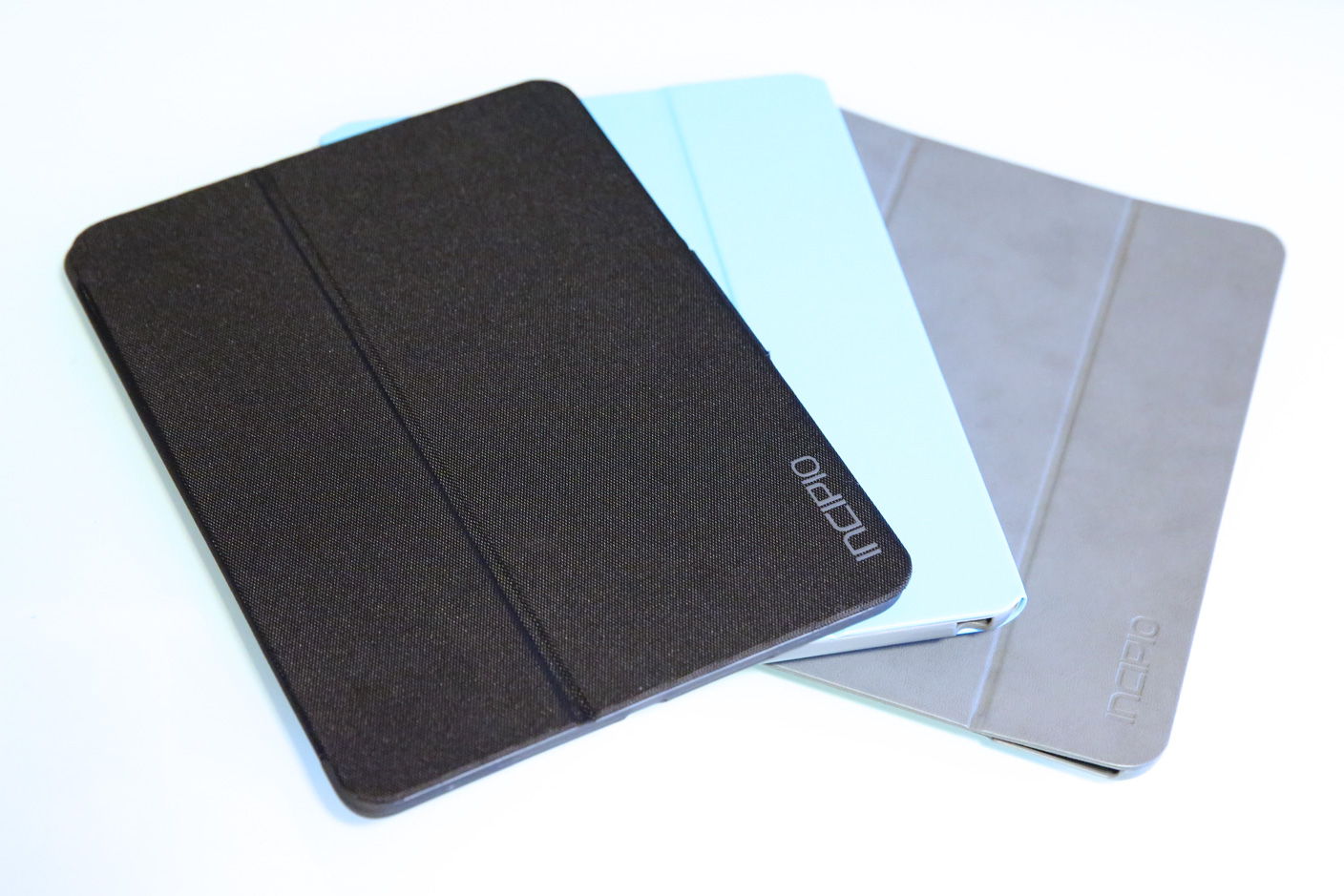 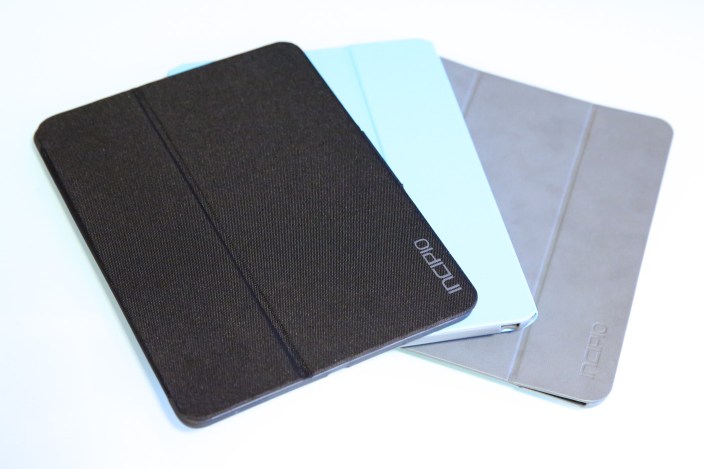 Having reviewed hundreds of different models over the years, I can say with some authority that iPad cases are rarely “exciting.” Early on, Apple established the folio — a lidded sleeve with the ability to stand upright for videos — as the de facto standard for iPad case design, and perhaps half of all the iPad cases since then have followed the same general theme, differing more in materials than functionality. Incipio’s latest designs for the iPad Air 2 are all small riffs on the same idea: fabric lids connected to plastic iPad holders, varying more in the particulars than the broad strokes.

We’re taking a quick look today at three cases: Clarion ($35), Faraday ($40), and Tuxen ($50). Despite their varied MSRPs, they can all be had for between $31 and $33 through Amazon, with some color options going for higher prices. Functionally, they’re very similar to one another: all three support both video and typing angles, protect most of the iPad against scratches and dings, and use magnets to automatically turn the iPad’s screen off or on when it’s closed or opened. Read on for what makes them different from one another… 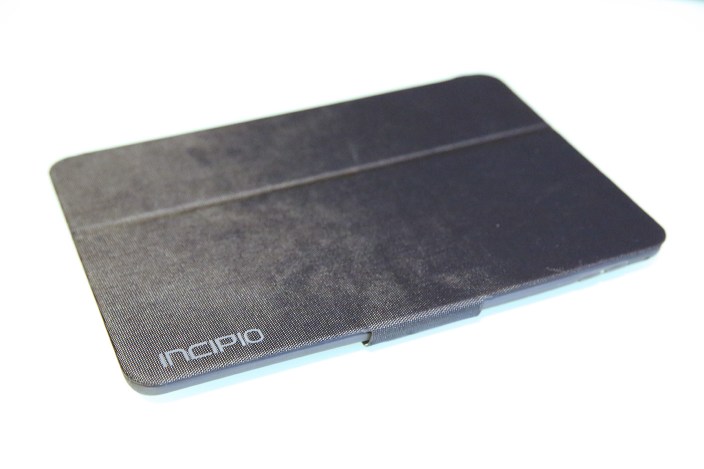 Clarion is the most unique of the cases. Shown here in black, the back iPad Air 2 holder is a modified version of Incipio’s NGP cases, this time made from a combination of frosted and semi-clear soft plastic. Since 7.75″ by 5″ of the back is clear, Clarion lets you see stickers or other details on the iPad’s rear, pitched as useful for “labeling or asset tagging” by educational institutions. A textured fabric is used for the front lid; our review sample is a nice ballistic nylon, but Incipio’s packaging discusses faux leather, suggesting some variation in materials. 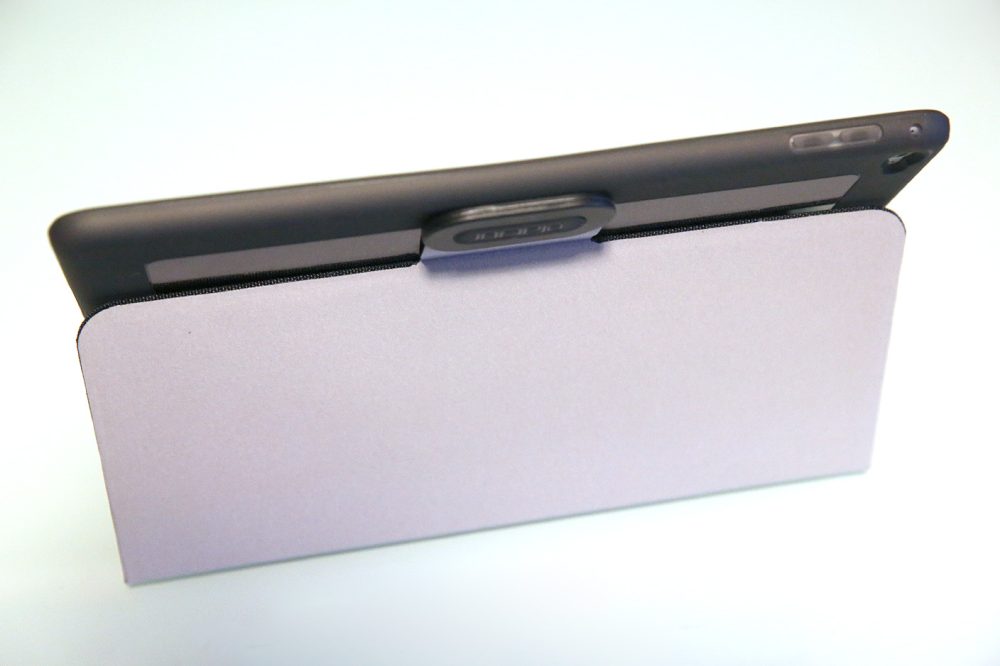 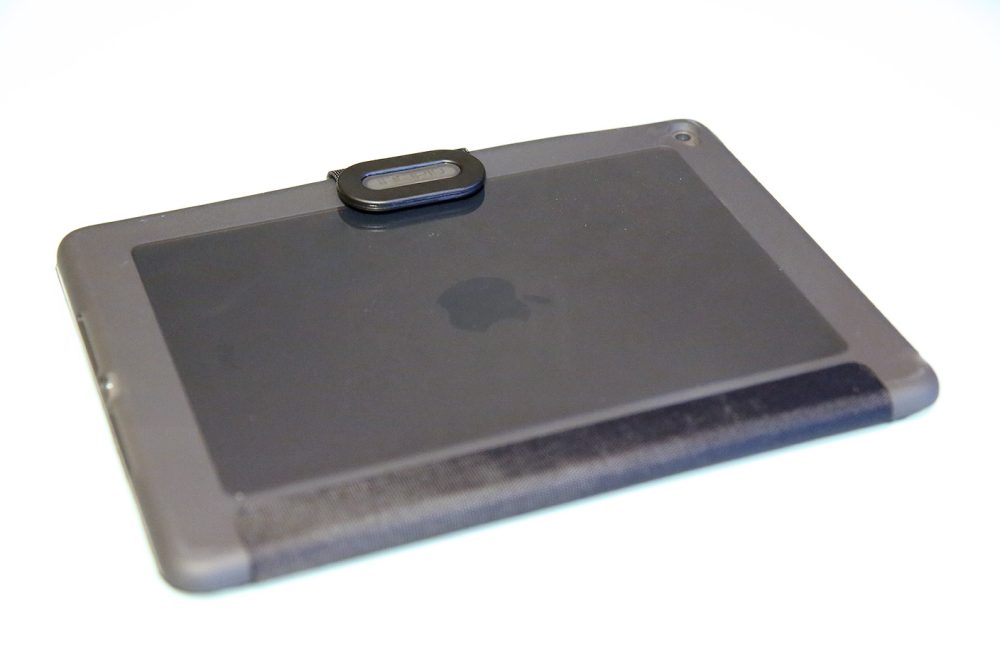 Although Clarion has one iffy design element — a lid buckle that looks nice but adds thickness to the right side of the thin iPad Air 2 — it’s otherwise a pretty nice case. The clear panel really attracts fingerprints, and its coloration can somewhat obscure whatever’s on the iPad’s back side, but there’s complete button protection and nicely-tailored port, speaker, camera, and microphone access. If we had to choose one of the cases, Clarion would be it. 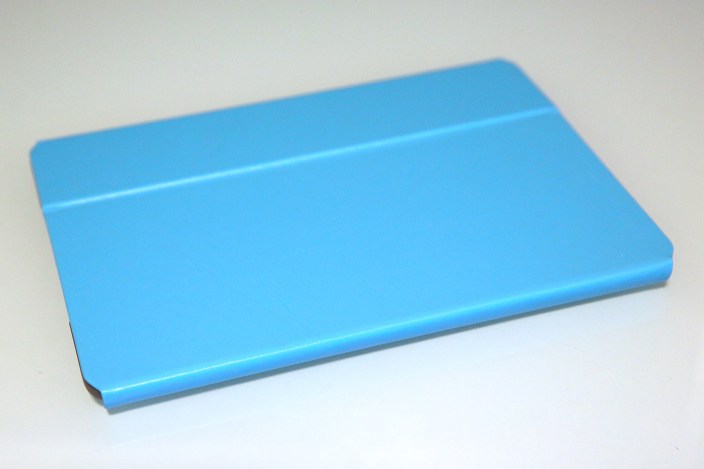 Faraday is a highly conventional iPad case except for one thing: its “magnetic fold over closure.” Shown here in blue, the iPad Air 2 holder is a hard plastic shell, wrapped from front to back with a respectable faux leather lid. Named after the magnetic Faraday cage, a large magnetic closure unusually extends beyond the front right edge to the back, holding firmly closed, as well as covering the iPad’s rear camera when the case is shut. 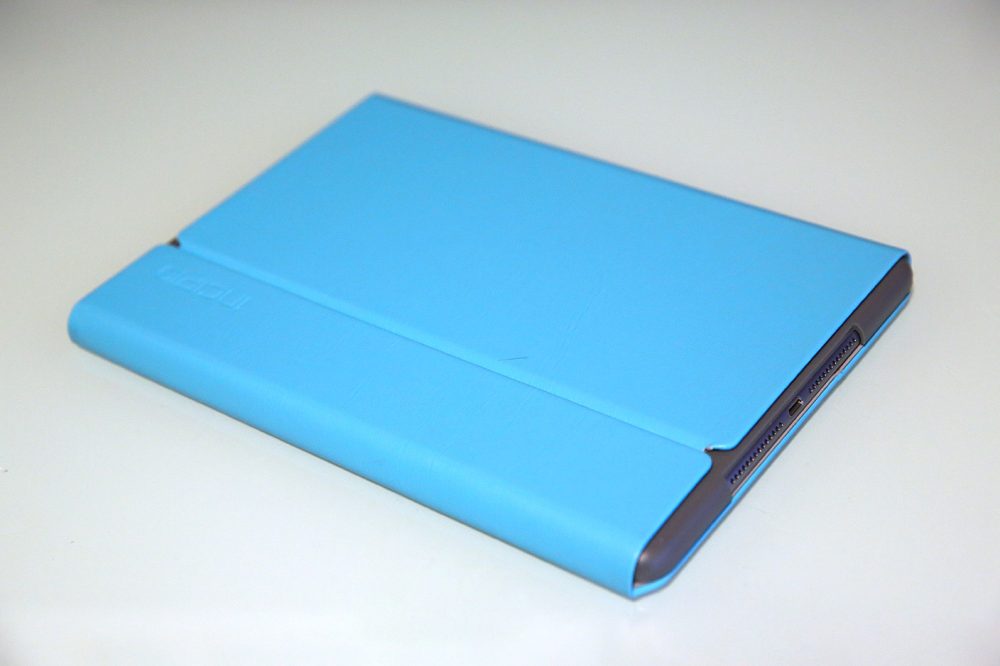 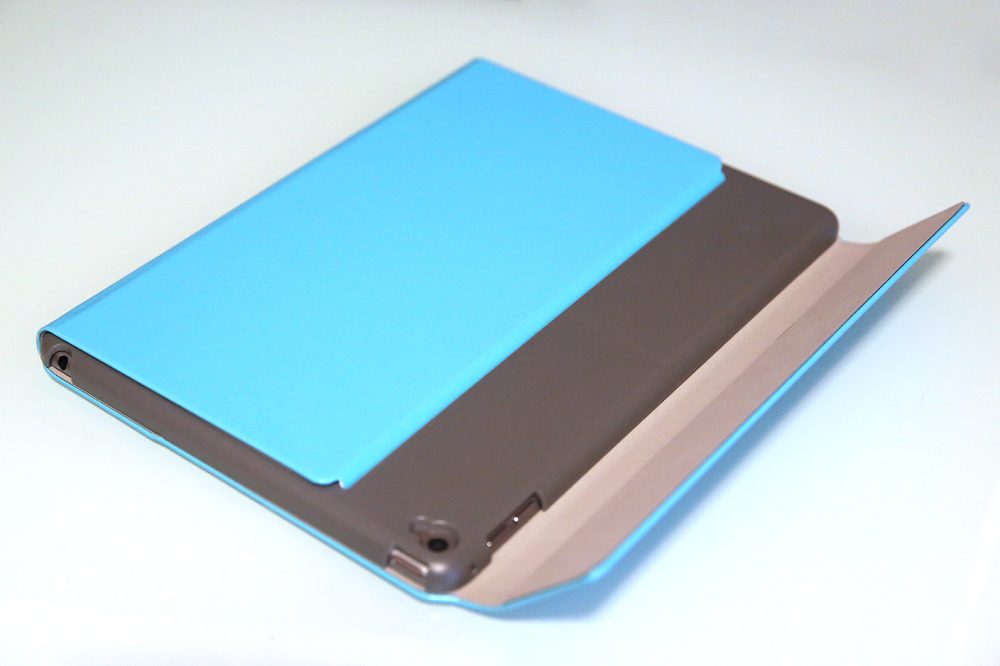 While Faraday looks nice and doesn’t cost much more than Clarion, its biggest issue is its thickness: the wraparound leather and hard plastic frame add back the bulk Apple stripped off the iPad Air 2 relative to its predecessor. The case is also a little more open on the top and bottom than Clarion, with no soft plastic to cover buttons or the areas around the speaker grilles. These aren’t killer factors, so if the case appeals to your personal tastes, it’s still worth considering, but it’s not a real standout. 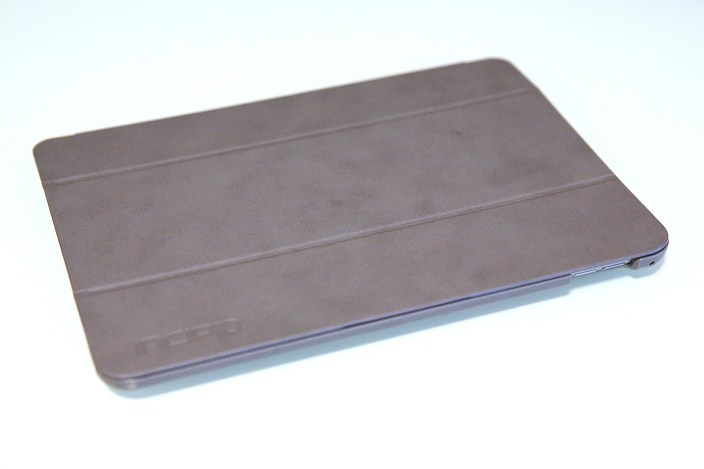 Shown here in gray, Tuxen is a hybrid of Clarion and Faraday. Like Faraday, the front lid is faux leather, and there’s a hard plastic shell holding the iPad Air 2 inside. Incipio continues the fabric by connecting the lid to the back, and within an inset panel on the back shell. While these choices make the case thicker than Clarion, they also make Tuxen thinner than Faraday and a little fancier-looking, though the lightly textured leather shows a surprisingly high number of fingerprints very quickly. 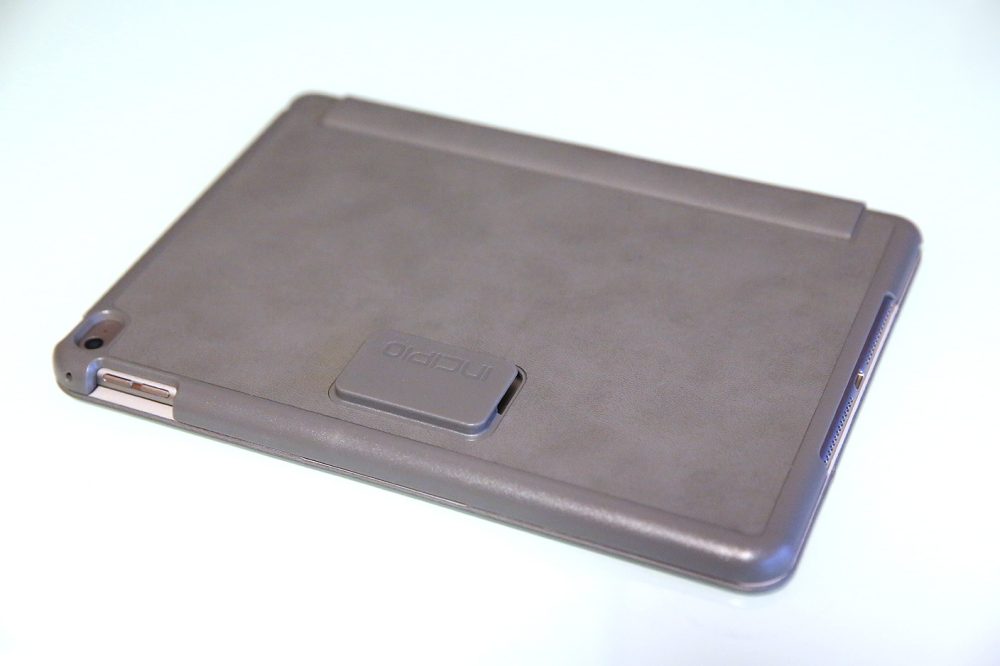 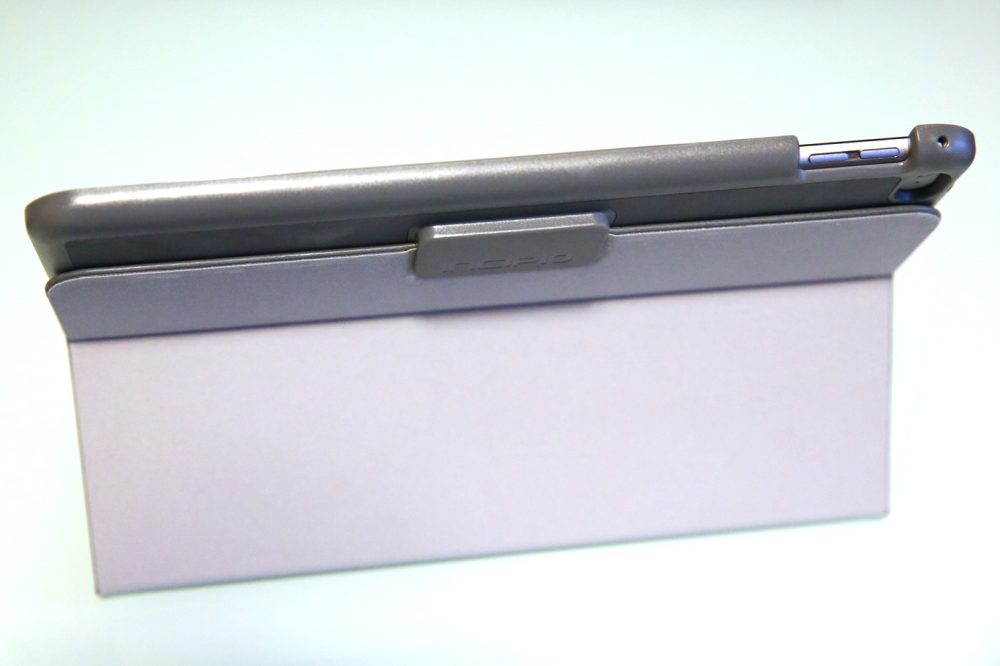 The Tuxen name comes from the stand functionality: the lid “tucks in” to an elevated hard plastic nook in the case’s back, enabling the video and typing angles. It achieves this functionality — and the ability to stay closed — without needing the large buckle found on Clarion, and though the plastic is still noticeably thicker on the back at the nook point, it doesn’t feel like it’s going to break off under normal use. Apart from the higher price tag, Tuxen’s only other issue is that it’s the least protective of these cases, with completely exposed buttons and large open swaths of iPad metal on the top and bottom of the case.

From my perspective, there’s no clear winner between these three cases: they’re all pretty good cases with small to medium issues, and all do basically the same thing, making the least expensive choice — Clarion — the easiest to recommend. If you value wraparound faux leather enough to pay a small premium and deal with added thickness, Faraday is good, and if you want the faux leather without as much thickness or protection, consider Tuxen. I wouldn’t personally pay a big premium for the other two cases relative to Clarion, but at lower Amazon prices, any of these cases will add the same basic stand functionality and cover enough of your iPad Air 2 to be satisfying.