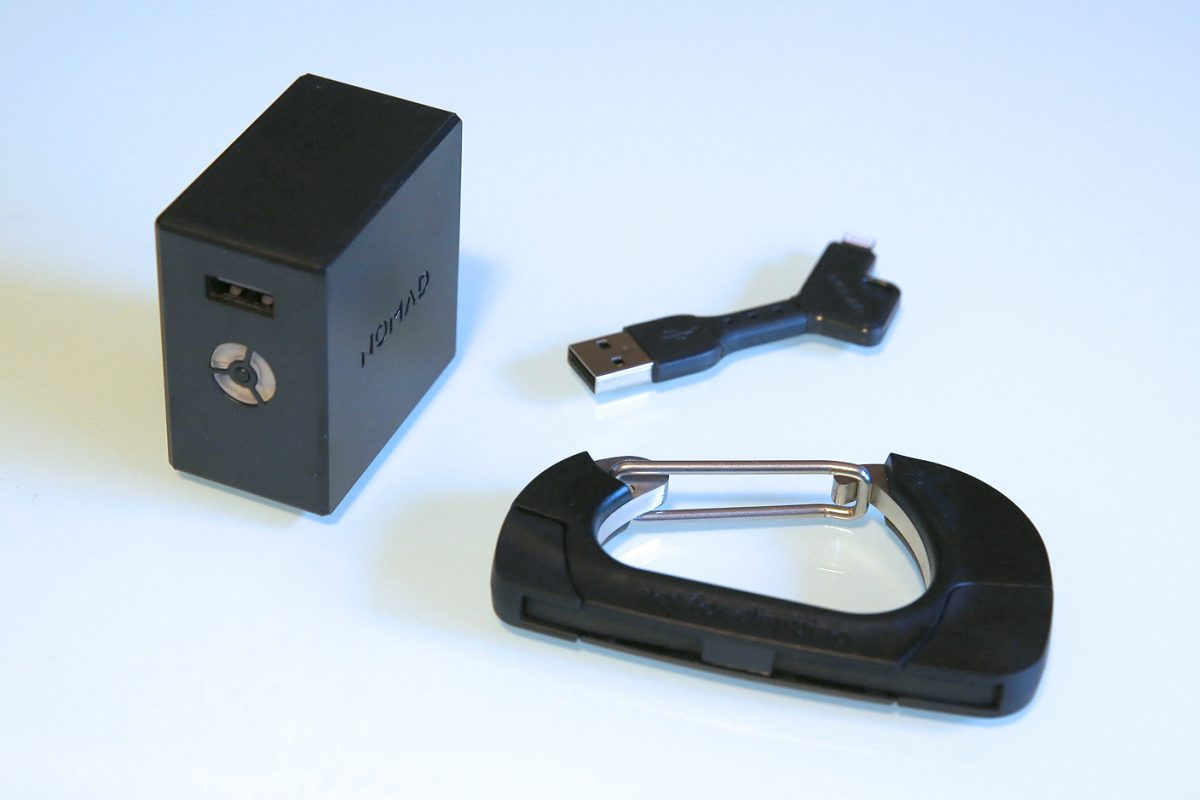 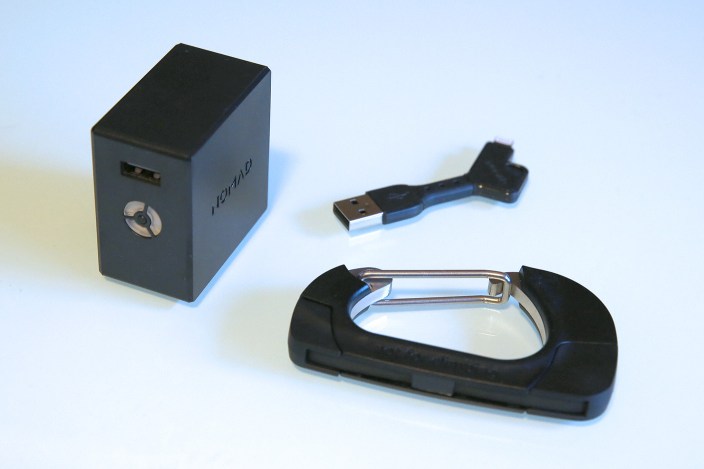 Lightning cables and battery packs are often so similar that I rarely have a strong preference for “nicer” alternatives over basic ones. But Nomad has been working to change that by creating practical charging accessories that you’ll actually want to carry around everywhere. Last year, it debuted the NomadKey ($25), which places a Lightning to USB cable on your keychain, as well as NomadPlus ($40), an iPhone battery pack that combines with Apple’s 5W USB Power Adapter to become an 1800mAh “anywhere” recharger.

Now it’s shipping the NomadClip ($40), which combines a super-sturdy carabiner clip with a Lightning cable. I’ll walk you through all three accessories below in this combined review. 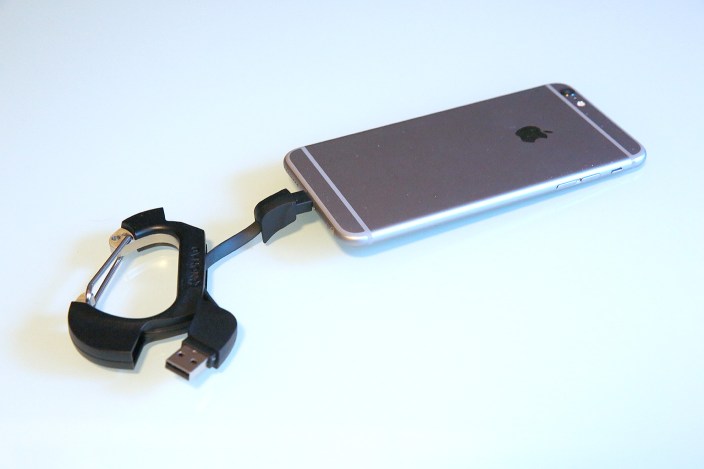 The most excitingly different of these accessories is the newest, NomadClip, which just began shipping in late January. Measuring roughly 3.6″ by 2.1″ by 0.4″ at its largest points, NomadClip is one of the largest, sturdiest-feeling plastic and metal clips I’ve ever handled, combining a D-shaped, spring-loaded stainless steel hook with a rugged plastic frame. Nomad was wise to mold text reading “not for climbing” into one of the sides, because the clip feels like it could support a lot of weight.

Practically, you’ll want to use NomadClip to hang things from a bag or clothing loop, and after testing it, I have every bit of confidence that it’ll serve either purpose quite well. Full-sized USB and Lightning plugs recess completely into the frame for protection, coming out easily with deliberate tugs, but without any sense that they’ll be accidentally dislodged. And they obviously work, too, best serving as a connection point between your iPad, iPhone, or iPod and a laptop. Since the total end-to-end length of the cable is under five inches, it’s best for on-the-go use. While it’s not cheap, it’s built well, and the Nomad web site’s 20% off discount makes the price reasonable given the quality and functionality. 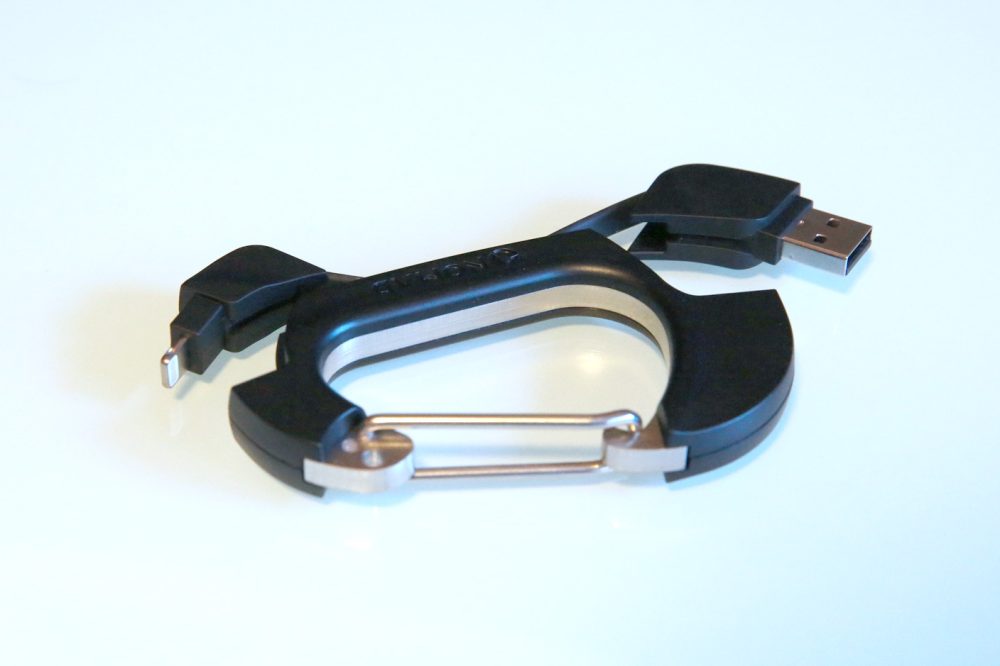 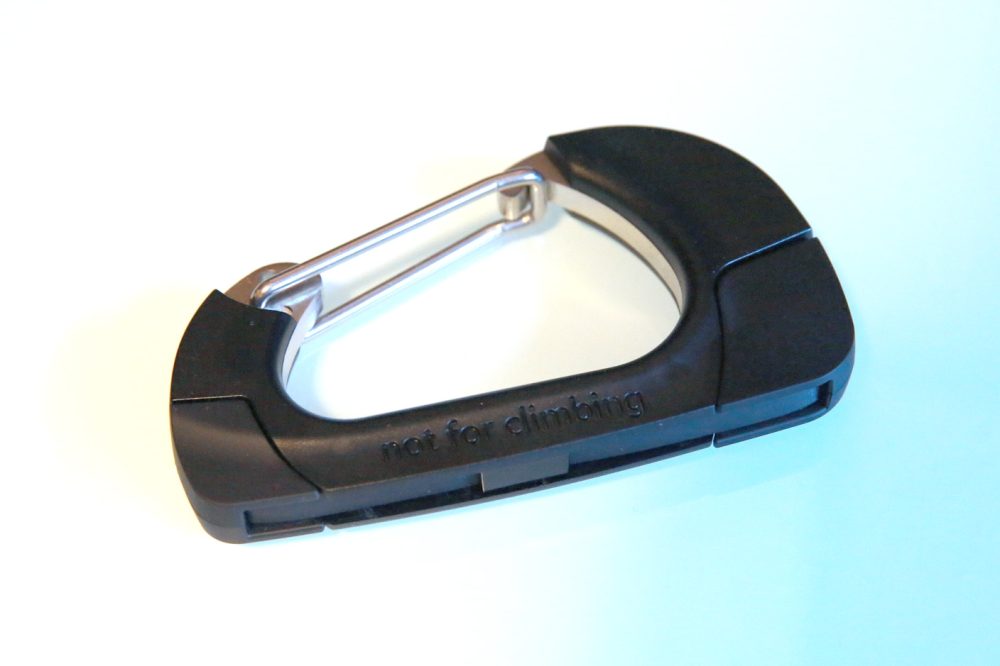 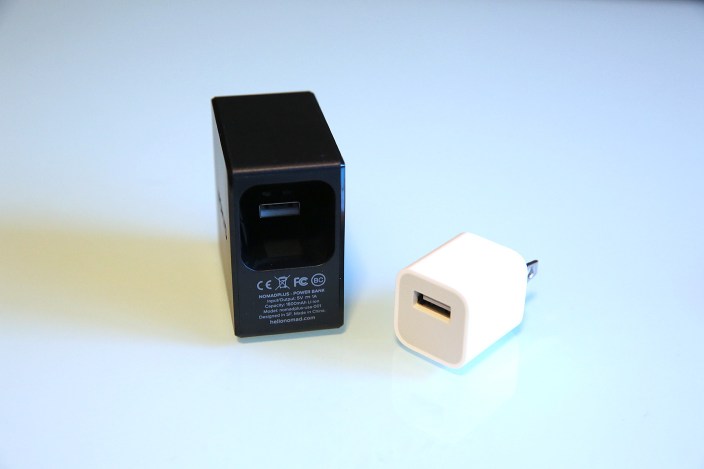 Over the years, I’ve tested a bunch of accessories that leveraged Apple’s MacBook or iPad chargers, but NomadPlus is a rarer design that relies upon the 5W USB Power Adapter included with every iPhone (and some iPad minis). NomadPlus adds an 1800mAh battery and pass-through USB port to Apple’s adapter, enabling you to have spare power on the road, as well as refueling both the iPhone and internal battery – notably, in sequence rather than simultaneously – when you can access wall power.

The 2.1″ by 2.1″ by 1.2″ black box is more angular than Apple’s (and most third-party) adapter designs, but has a USB plug-laden slot on the back that lets you slide the 5W Adapter in and out; a firm tug on the blades is all that’s needed to separate them, if you want to do so for travel. Three lights on the front surround a power indicator button; NomadPlus’s outbound charging turns on automatically when a USB cable is connected.

In my testing, the battery was able to add 50% of power to an iPhone 6 Plus, so users of smaller iPhones can expect 70% (iPhone 6) or greater recharges; iPad mini users with the 5W USB Power Adapter will obviously see smaller percentage gains but still hours of additional run time. Like NomadClip, NomadPlus’s durable-feeling hard plastic body and practicality offer very real value at the company’s 20% off price point, though it would be great to see Nomad develop a self-sufficient version with folding wall blades. 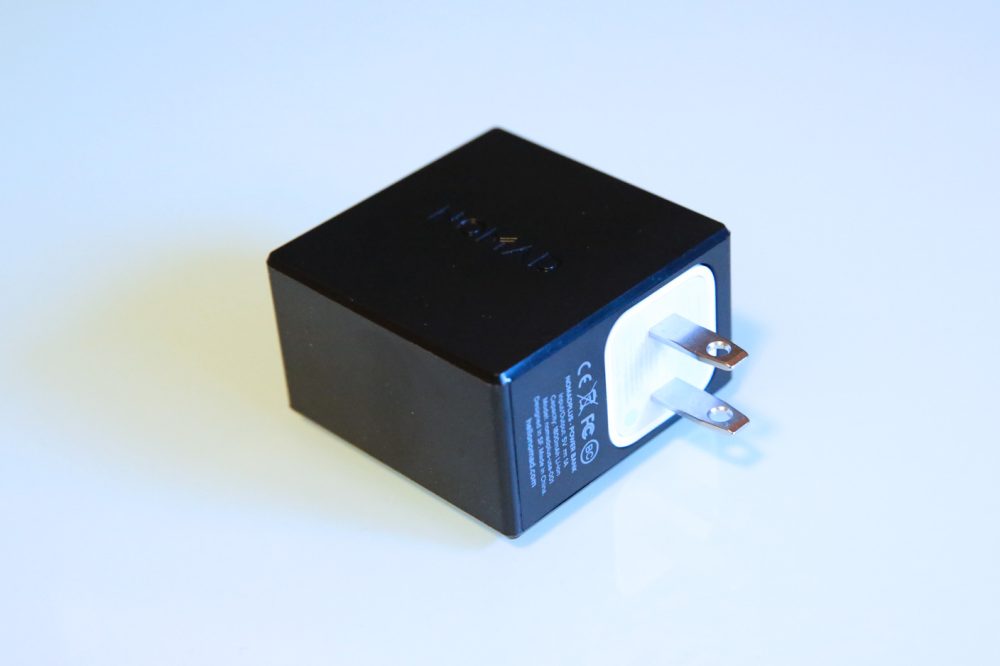 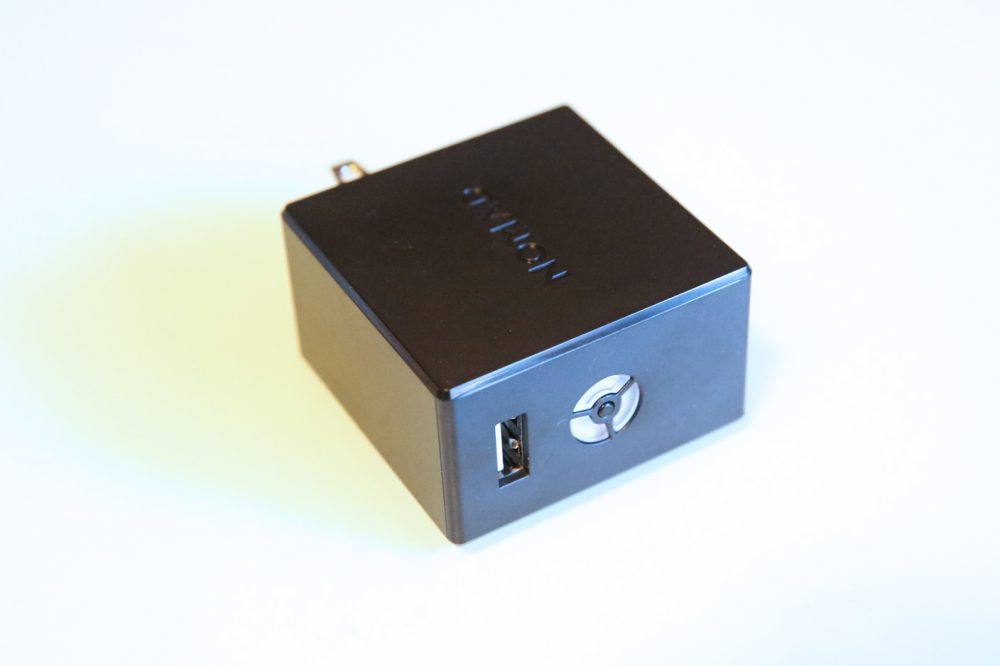 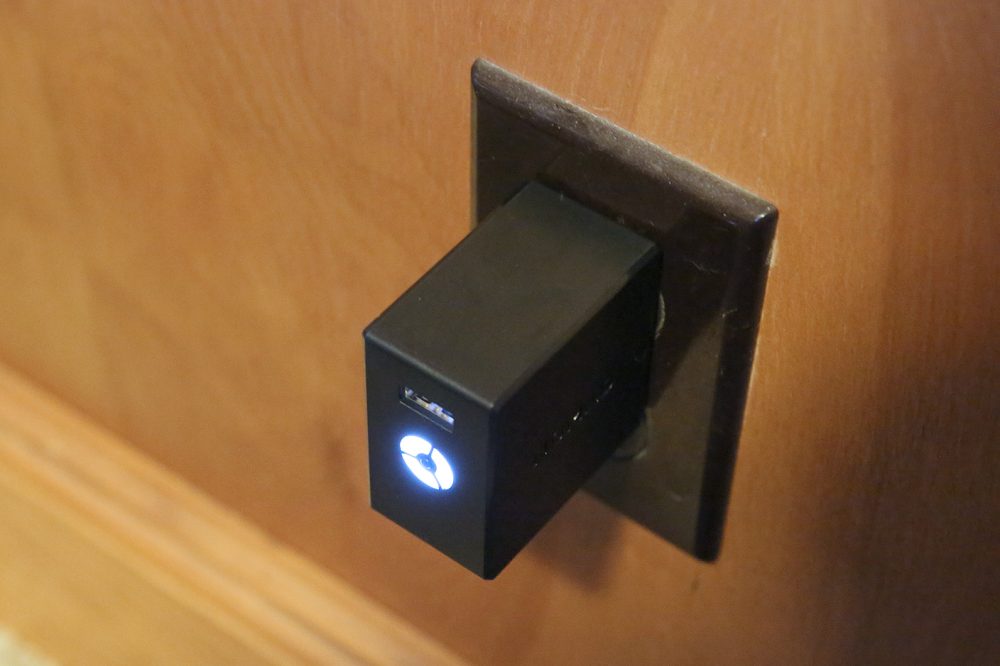 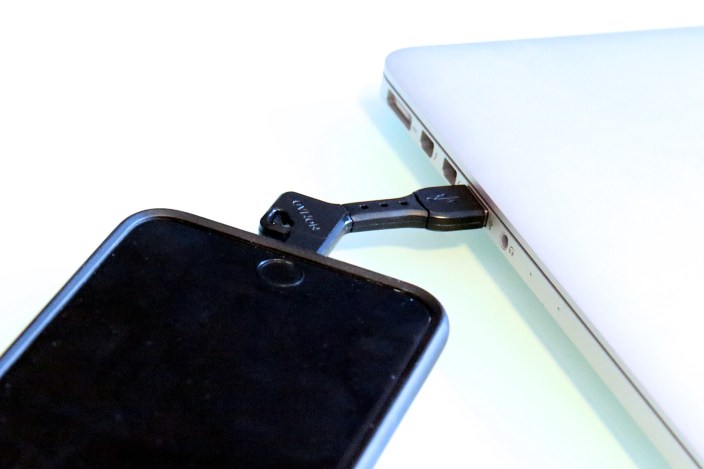 Last in the collection is NomadKey, which arguably has the broadest appeal but also the most glaring issues. Only 3″ long from end to end with a real cable length of around 2.25″, NomadKey is ultra-practical in that a heavily reinforced plastic hole on one edge can keep it on your keychain at all times – a guarantee that you’ll have it with you if you carry home or car keys around all day. But it’s also super-short, and includes no protection for either its USB or Lightning connectors.

While it’s very easy to recommend NomadClip, which performs the same function with extra cable length and connector protection, NomadKey doesn’t have quite the same sense of long-term durability. It’s not the materials: both of the connectors are housed in hard plastic that feels much like the other accessories, necessarily joined by a softer rubber that’s much thicker than the typical Lightning cable. This lets the cable flex a little, which is necessary when connecting ever-thinner iPads and iPhones for laptop charging.

My only problem is the exposed plugs; caps to cover them would likely get lost or have durability problems (like Bluelounge’s competing, much more expensive Kii). If you’re willing to take the risk on NomadKey at Nomad’s discounted 20% off price of $20, you’re not paying much more than you would for a spare Apple-branded cable, and may find the convenience appealing. 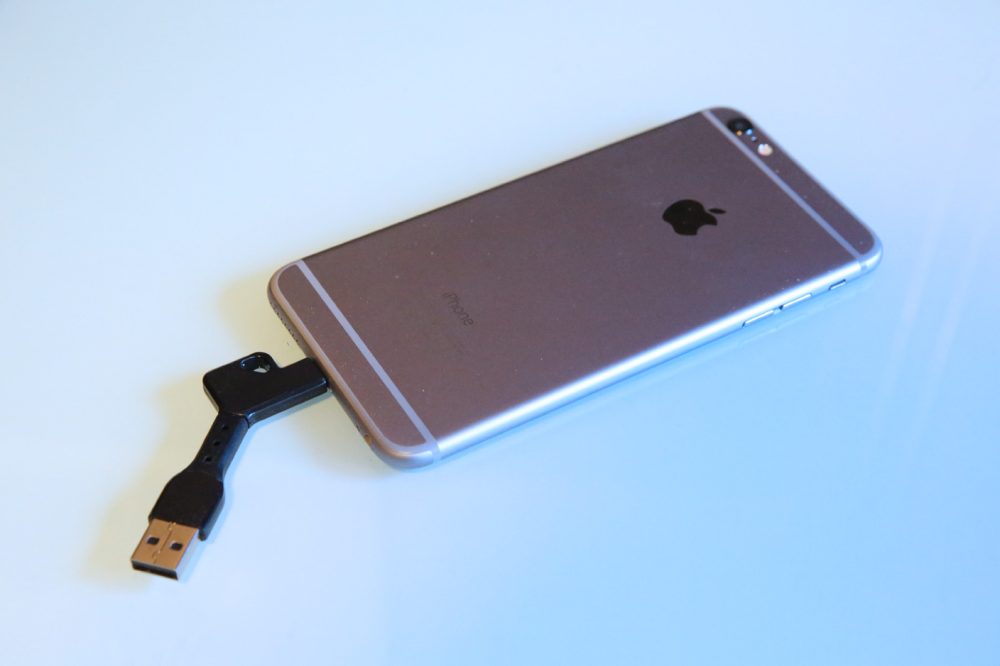 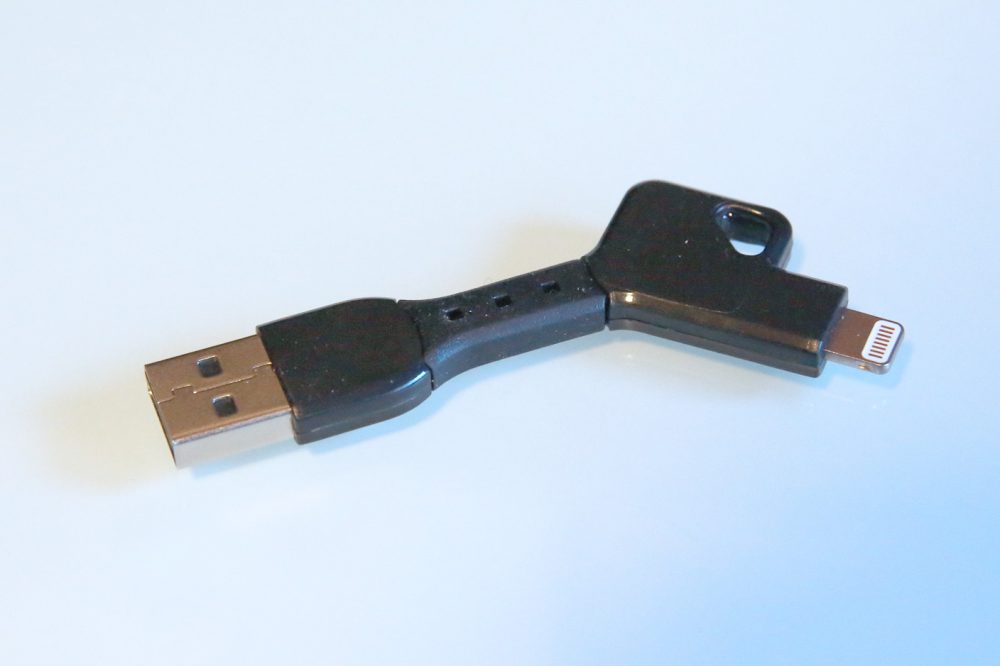 All three of these accessories are appealingly designed and practical; I also liked that they were very efficiently packaged in small, eco-friendly cardboard boxes without the unnecessary plastics and inserts I so commonly see in Apple accessories. As of press time, the best prices for all three accessories are through Nomad’s web site itself rather than through third-party vendors.