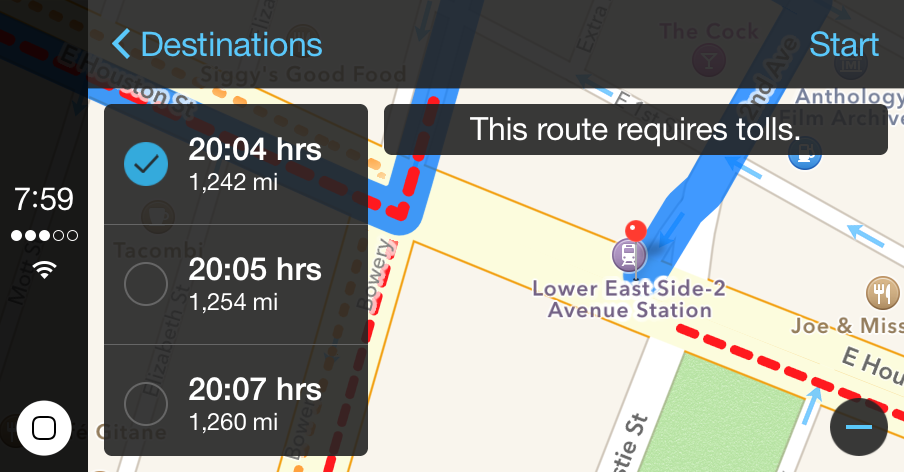 Apple applies for and gets awarded patents for everything under the sun, and patents don’t always translate to shipped features. Disclaimer aside, the iPhone maker was recently awarded a patent for a potentially useful feature that could help you avoid areas with weak cellular coverage when planning your trip with navigation in Maps.

The USPTO awarded Apple with a patent (via Gigaom) to analyze routes between two locations and “employ an algorithm that considers wireless network signal strengths along those routes.”

In other words, because your iPhone can collect and measure cellular signal data and many iPhone users anonymously share travel data with Apple, there’s potential for Maps to know which routes problematically contain dead zones and suggest lengthier routes with better signal.

This could help you avoid routes where you may lose the ability to place a phone call, use Siri, or stream iTunes Radio or Beats Music. As a CarPlay user, losing the use of Siri in the car is a pretty big annoyance, and until Siri goes completely local this will be the case.

Avoiding routes with low signal area could also help with battery life performance as traveling through an area with a spotty connection can quickly tax the battery. The patent specifically mentions car navigation, though, but could potentially be useful for walkers or cyclists if the feature ships.

Interestingly, the patent was first filed in 2012 around the time Apple replaced Google on the iPhone and iPad as its Maps provider and introduced its own solution.

Perhaps will see this feature present in a future Apple Car or just a Maps update extended to Apple’s CarPlay feature … or never at all as some patents go. Like driving further to avoid a toll, would you consider driving a longer distance to avoid a dead zone?