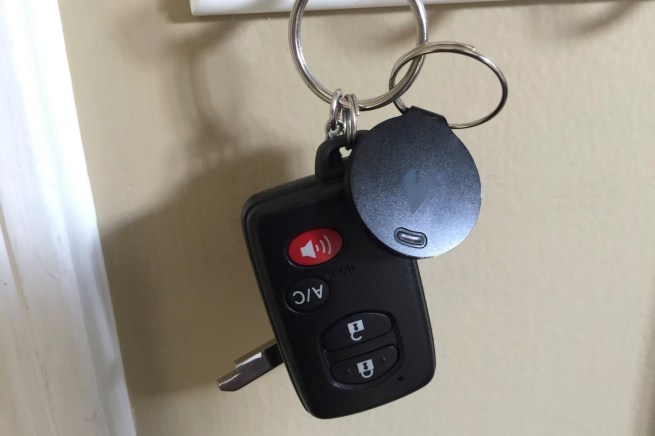 Two years ago, the Tile Bluetooth tracking device raised over $2.6 million in a crowdfunding campaign, thanks in part to an expansive ad run that seemed to blanket the entire Internet. Elegantly designed with a square plastic housing, Tile paired a low-energy Bluetooth chip with a battery, letting you track any attached item using a Bluetooth 4-enabled iPhone. Each Tile can track keys, a purse, or even a roaming pet for a year before the battery dies, at which point you are supposed to replace it. The first Tiles shipped last year, and can now be had for $20 each versus their standard $25 retail price.

I skipped Tile because I don’t like products that need to be replaced when their batteries die. Over the course of reviewing thousands of Apple accessories, I’ve watched some companies waste vast quantities of plastic, metal, magnets, and packing materials, and I try not to buy things that are designed to be worthless after a short period of time. (Note: Users are encouraged to recycle Tiles by buying discounted replacements and mailing old units back to the company.) So a new Tile competitor called TrackR Bravo ($29) appealed to me. Made partially from anodized aluminum, it’s shaped like a dog tag and designed to be kept rather than tossed away. The core functionality is the same as Tile’s, but Bravo’s battery can be replaced with ease. You can also use Bravo to locate a misplaced iPhone, and optionally sound a separation alarm whenever your iPhone and Bravo get too far away from one another… 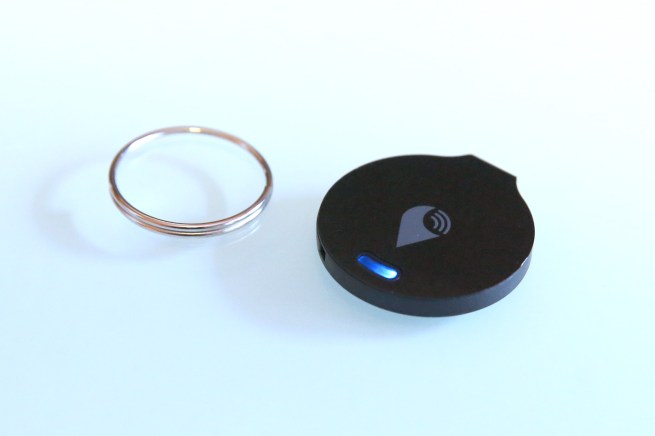 Although Bravo is similar to Tile in basic features, it’s clear that TrackR wanted to make something nicer — and not just for aesthetic reasons. The 1.2″ diameter circle is metallic on the front, back, and top where a loop attaches to an included key ring, with plastic at the core where the battery compartment’s located. A quick prod with a paperclip swings the compartment open to reveal a CR1616 cell, which can be effortlessly replaced for about $1 after a year of use. 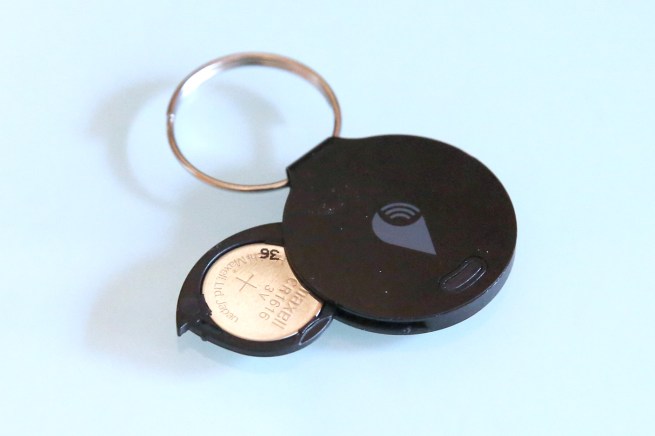 Bravo’s silver, copper, black or blue metal back is featureless unless you want to have it laser-engraved by TrackR for an additional $10 — a novel idea that lets it actually double as a “return to owner” dog or cat tag rather than just sitting next to one. The front has a small blue light that only occasionally flashes to indicate pairing status, and there’s a tiny speaker inside that can squeal to make Bravo’s presence known if triggered by the iPhone. Reciprocally, holding Bravo’s button will trigger the iPhone to play an alert sound, signaling its location. If you tend to misplace your iPhone as often as your keys or purse, you can imagine why having the ability to trigger sounds on both sides would be handy. 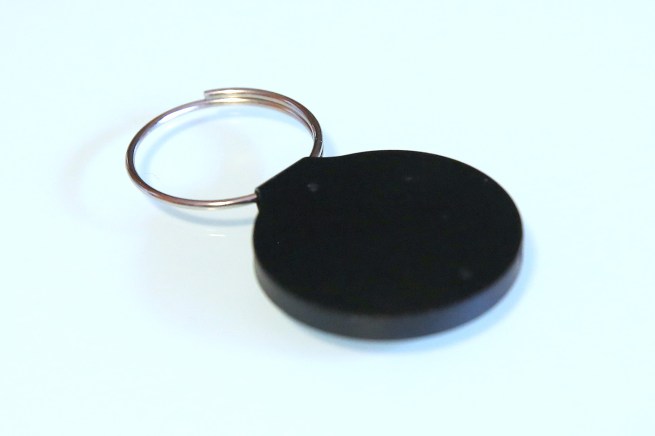 The key to Bravo’s functionality is TrackR’s free app, which is pretty robust. On first launch, the app asks you to sign up for a free service called TrackR Crowd GPS — more on that in a moment — then lets you pair and label each Bravo for easy reference. Icons for pets, cameras, backpacks, wallets, and tons of other potentially losable items are included in the list. Once a Bravo is added, the app will attempt to re-pair with it whenever you launch the app. It also saves each Bravo’s last known location so you can see it on a map, and easily request directions to locate it. The app isn’t perfect: at home, the map’s display view didn’t look quite right, and I found that it did nothing to help me locate a Bravo lost inside a house or building. But if your object’s far away, the Apple Maps-assisted directions will point you in the right direction. 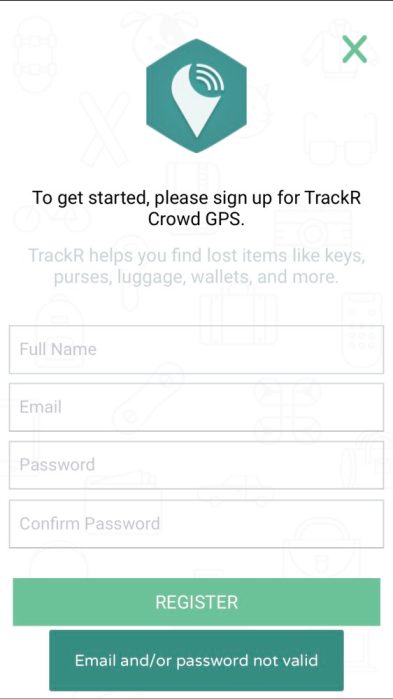 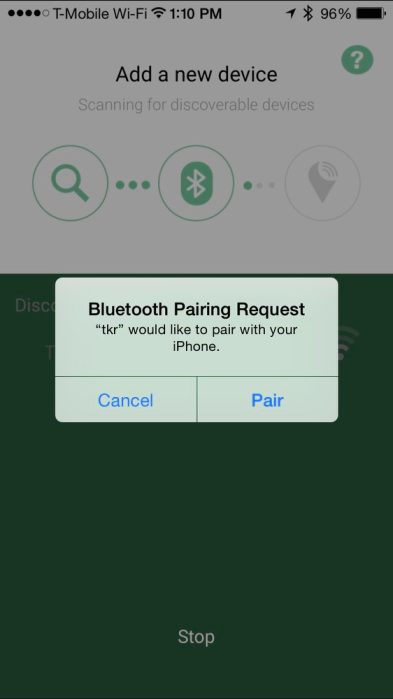 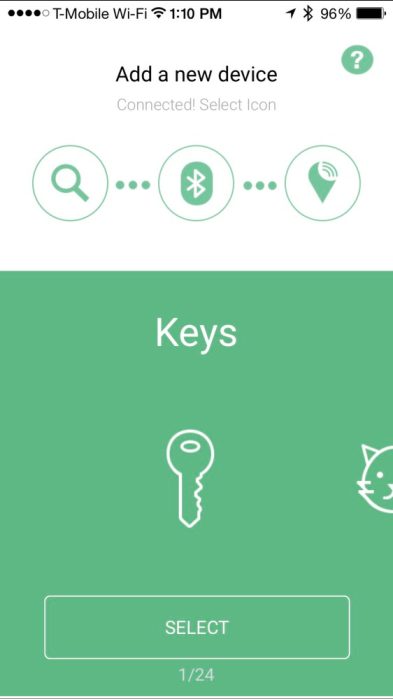 My gut feeling is that most people will use Bravo primarily to find misplaced items within their homes, and that’s where TrackR’s package excels. Pressing a speaker button on the screen lets you trigger Bravo’s squealing speaker, while a phrase indicates whether it’s “close by,” “near” or distant. An editing menu lets you choose the sound or song that will play on your iPhone when Bravo’s “locate the iPhone” button is pressed, and the app automatically turns your iPhone’s speaker volume up to help you find it. This part works quite well. 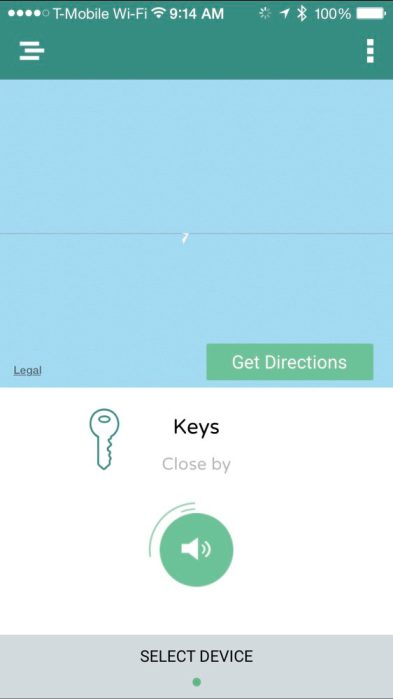 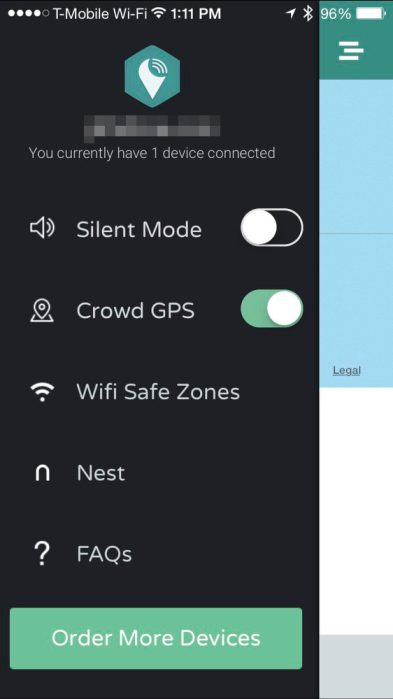 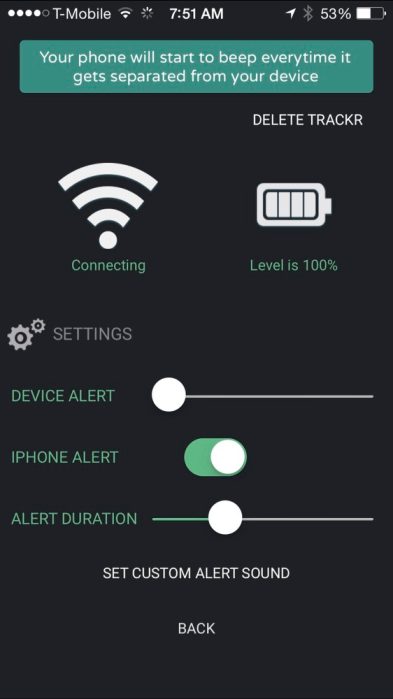 The editing menu is also where you choose whether or not to activate the aforementioned separation alarm — actually two alarms — both of which could use additional development time. First, there’s a switch labeled “iPhone Alert,” which can automatically trigger a sound on your iPhone when the distance between your iPhone and Bravo increases. On a positive note, this alarm does work, typically at a 10-foot or greater separation. Second, there’s a slider marked “Device Alert,” which is supposed to make Bravo squeal when it gets separated from your iPhone. Unlike iPhone Alert, I couldn’t get Device Alert to work reliably.

Both of these Alerts depend on your iPhone to maintain a more consistent (and potentially power-draining) Bluetooth connection, and yet they might not go off until Bravo and your iPhone have been separated for 30 seconds. If Bravo has only been misplaced, a delay isn’t a problem, but if it’s been stolen, the thief could be far away with Bravo by the time the alert goes off on your iPhone. On the other hand, if your iPhone’s been stolen, you might actually hear the alarm going off, assuming you’ve chosen a distinctive sound and your iPhone hasn’t been muffled. 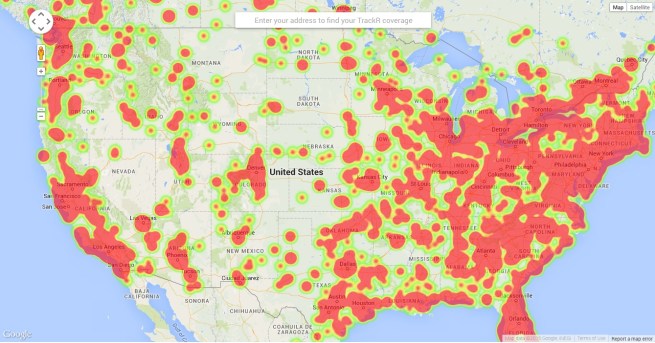 Two of TrackR’s other features are designed to make the most of Bravo’s Bluetooth 4 wireless capabilities, which are naturally distance-limited to a 100-foot range. Crowd GPS forms a mesh network from all opted-in TrackR customers, enabling you to find a lost item whenever another TrackR user comes within 100 feet of your Bravo. A map on TrackR’s site shows where the TrackR app has been used recently and has better Crowd GPS “coverage.” This is a nice feature, and competitive with something Tile offers, though it obviously depends on TrackR to become more ubiquitous, and other TrackR users to opt into supporting Crowd GPS. 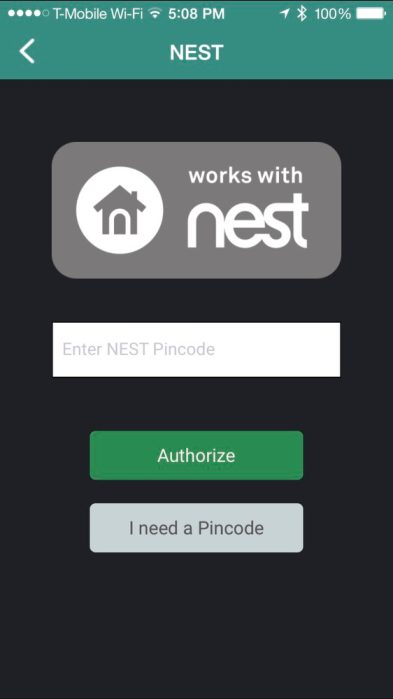 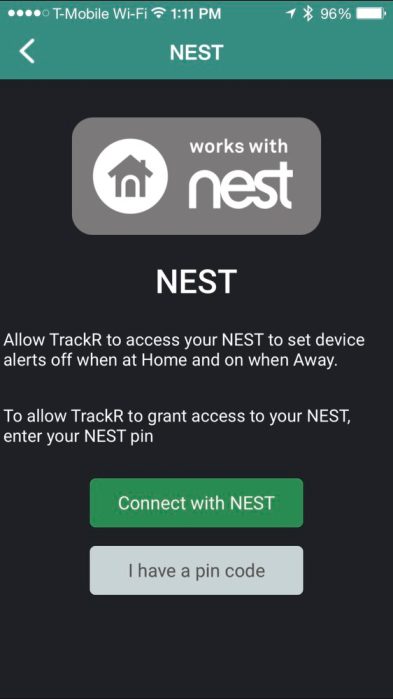 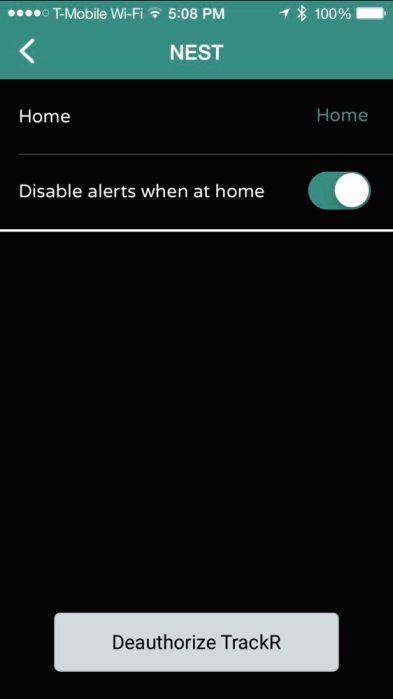 In partnership with Nest, Bravo can automatically disable the previously discussed separation alerts whenever Nest senses you’re at home. While I wouldn’t call the Nest feature a pure gimmick, the TrackR app also has a feature called Wifi Safezones that disables alerts whenever you’re connected to one of your specified Wi-Fi networks. Since Nest is Wi-Fi-dependent, you get the same functionality by specifying a Wifi Safezone, and don’t need to authorize with Nest to use that feature. Perhaps the Nest integration will become more useful (say, for automatic temperature adjustment when your keys arrive at home) in the future. 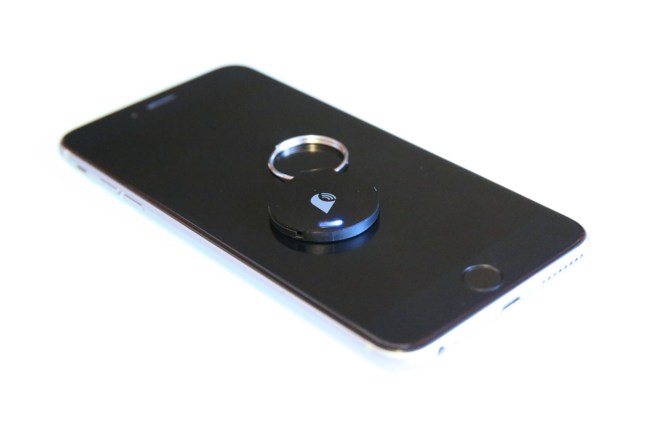 My feelings about TrackR’s Bravo are mixed but generally positive. On the plus side, I really appreciate the fact that it’s been designed to last — including that replaceable battery — and that its two-way communication ability enables Bravo to trigger an alert on your iPhone, and vice-versa. The industrial design isn’t as elegant as Tile’s due to the separate key ring, but the added functionality and engravability Bravo offers are non-trivial additions, both worthy of the small price premium. On the other hand, Bravo’s software could still use a little work, as features ranging from mapping to separation alerts to Nest integration are all technically “working” but not quite where they could be. So if you want a cheaper, disposable, and less functional solution, Tile is a viable alternative; TrackR also sells StickR as a cheaper $25 model made entirely from plastic. But if you value longevity and added features with some neat future potential, Bravo delivers a good experience for its slightly higher price.