Review: Vellum, the ebook generator for Mac with added prettiness

One of the great things about technology is the way it has democratized the publishing world. Today, anyone can publish an ebook on iBooks and Amazon, whether as a freebie or a commercial book.

Creating an ebook isn’t difficult. If you’ve written your book in Pages, you can export to EPUB–the format needed for iBooks–direct from the app. There is also the excellent Calibre app (featured in our How-to guide), which will convert just about any file format to any type of ebook. There’s also iBooks Author, but that has the disadvantage that if you use it to create your book, you’re not allowed to sell the iBooks version through other channels.

But as I found out when I came to create my own ebook, generating an ebook that looks attractive on all of the different devices available is a rather tougher challenge. That’s the job the Mac app Vellum claims to do, so I put it to the test …

Vellum assumes your source book is a Word file. If it isn’t, pretty much any writing software you might use can export as a .docx file. Just open the Vellum app, go to File > Open and select your Word document.

Vellum attempts to intelligently parse the file as it is imported. If you have a table of contents, Vellum should recognize this and mirror the structure. In my case, I’d written my technothriller in scenes rather than chapters, so Vellum had few headings to go on. It picked up the page-breaks in my pre-amble, and decided these were chapters, and also split the story itself into three. 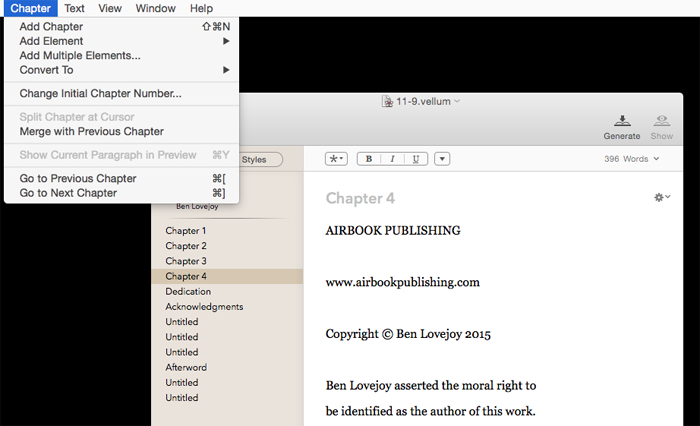 Fortunately, spurious or missing chapters are easy to fix. In this case, I clicked on what it thought was chapter 4, then went to the Chapter menu and selected Merge with Previous Chapter. Doing this for each, including the spurious ‘untitled’ breaks in the story itself, took only a minute or so.

Once left with only one ‘chapter’ for the preamble, I renamed it to Preamble. However, Vellum still thought this was a chapter, and numbered it. To persuade it to lose the numbering, you return to the Chapter menu, select Convert to and choose Uncategorised. If if had been a chapter, and you just wanted to lose the numbering, this can be done by selecting the gear menu top-right and unchecking numbered.

That done, I just clicked into each section name and renamed them to end up with this: 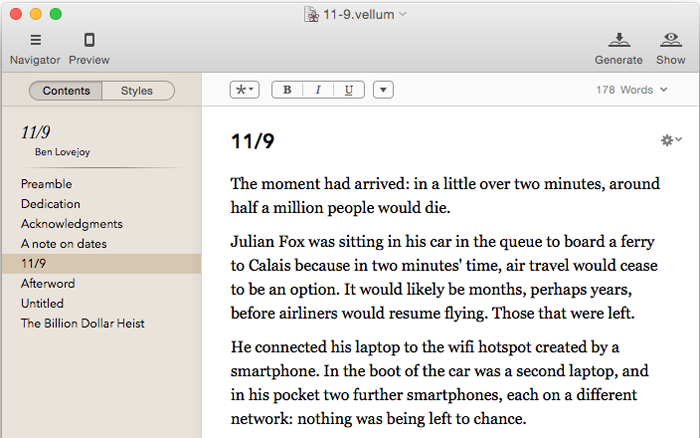 My scene breaks were three asterisks centred, and Vellum recognized these, turning them into horizontal lines in iBooks, for example. The text remains fully editable, in case you spot any last-minute typos.

You also need a cover image, which needs to be created in external software. Vellum checks that your image is the right size and shape for all platforms. Note that while most device screens are small, you still need a high-resolution image: anything up to 2400 x 3840 pixels, depending on the ratio of the book.

Once you have the structure, headings and cover sorted, you can then turn your attention to the aesthetics. In the beige panel on the left, you can see the Contents tab is selected. Just click on the Styles tab and Vellum will offer you a choice of eight stylesheets. Most of them are rather old-worlde style, so I’ve opted here for the most modern style, Chroma. 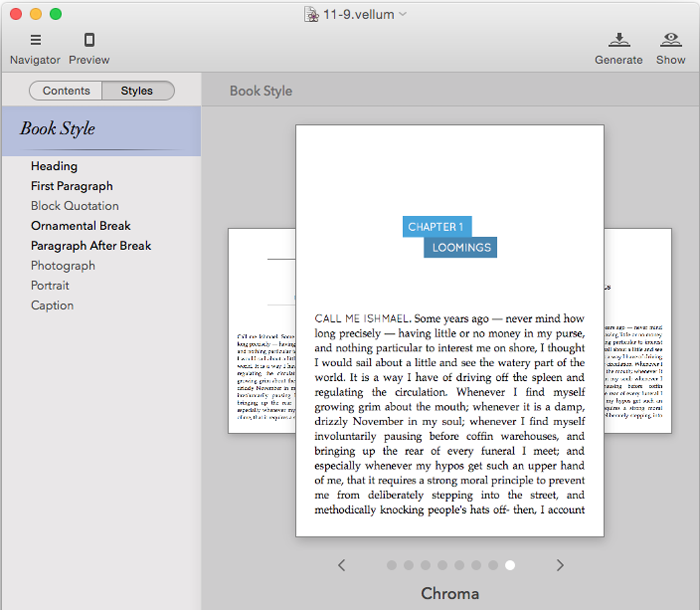 If you have a conventional chapter structure, Vellum will use your own book in these examples. As mine doesn’t, it instead uses the opening of Moby Dick.

You also have the option of customizing the style by clicking on the individual elements shown in the left-hand menu, above. For example, in Chroma you can select both different colors and different alignments of the chapter headings. 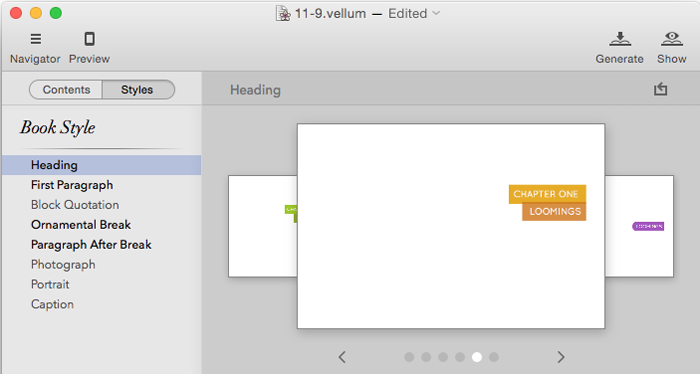 Of course, one issue with attempting to control the appearance of an ebook is that it will look different on different devices. Vellum has a handy preview feature to show you how your book will appear on the iPad, iPhone, Kindle Paperwhite and Nook Simple Touch. Each view provides a simulation that allows you to page through the book. 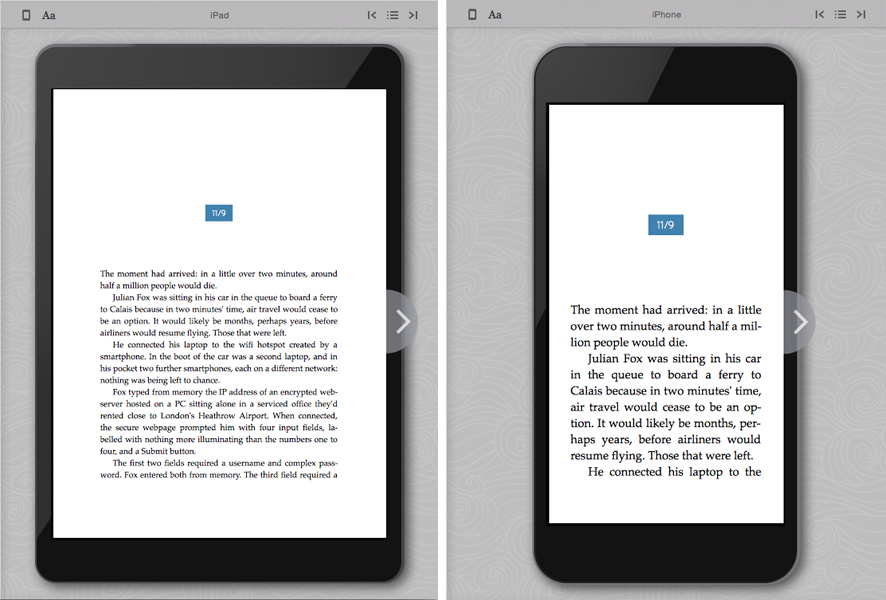 Once you’re happy with everything, clicking the Generate button and checking the formats you want outputs the ebook files in iBooks, Kindle and Nook formats. You do need to download a plug-in for the Kindle version, presumably because this is Amazon’s code, but that takes only a minute or two and only needs to be done once. 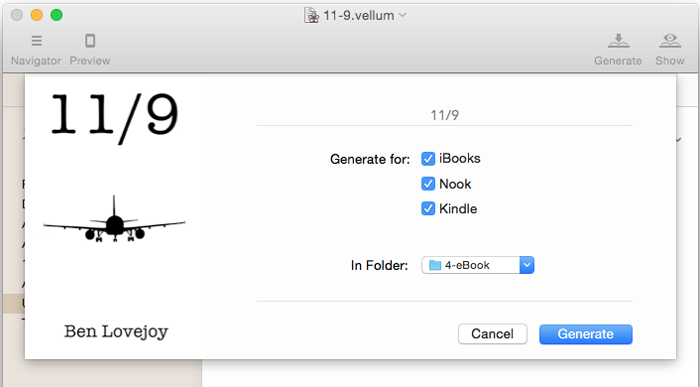 Were the app a free one, or if it cost a small, one-off sum, my conclusion would be a no-brainer. It’s really easy to use, and generates great results.

My hesitation is over the cost. Vellum offers a choice of three ways to pay for it. Unlocking it to generate a single ebook (in all three formats) costs $29.99. A 10-book license costs $99.99, bringing the per-book cost down to ten dollars, while an Unlimited license is a rather eye-watering $199.99.

If you’re creating a free book, thirty bucks might seem a steep price just to make it prettier, when there are plenty of free tools around. But for commercial books, I think it’s a lot easier to justify. Writing a book is a pretty major investment of time and effort, so $30 to ensure that the end result is as pleasing as possible to readers is, I think, not as unreasonable as it might seem.

There is also some good news. You can edit the book as many times as you like (it just locks the title, sub-title and author to prevent cheating); there’s no time-limit for the 10-book deal; and your credits remain valid for all future updates of the app.

All-in, for a commercial book, I think it’s worth the cost.

Vellum can be downloaded direct from the website or via the Mac App Store. If you’d like to check out my technothriller, 11/9, it’s being launched as a Kickstarter project.