It’s been a while since we heard rumors that a new iPad model would sport dual connectors for hooking it up to a computer or accessories, but a set of photos circulating online is bringing that idea back to the forefront.

The photos claim to depict the back of Apple’s upcoming “iPad Pro,” a larger 12.9-inch model of its existing tablet. Not a whole lot of new details are visible in the photos, but a spare Lightning port can be spied on the side of the device. Typically the Lightning port is located on the bottom edge. 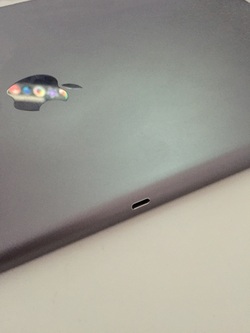 While the rumor sounds a bit ridiculous and has been brought up routinely since the first iPad was debuted, there have been previous reports which indicated Apple was interested in bringing multiple ports to the iPad Pro. However, those ports weren’t said to be proprietary Lightning connectors, but rather USB 3 plugs for connecting mice and keyboards.

As we noted in the original report, iOS would need to be completely reworked to support input from external devices such as a mouse, which makes this rumor sound a bit dubious.

Even if Apple is planning to bring mouse support to iOS for this new model, it seems very unlikely that the company will add multiple Lightning connectors.

More realistic expectations for the larger tablet include more powerful internal components, stereo speakers, and perhaps even a stylus (which could work nicely with the new Force Touch technology for drawing).

Production of the device has reportedly been pushed back until September. Earlier today a similar photo leak gave us a look at what is said to be the upcoming “iPhone 6C.”