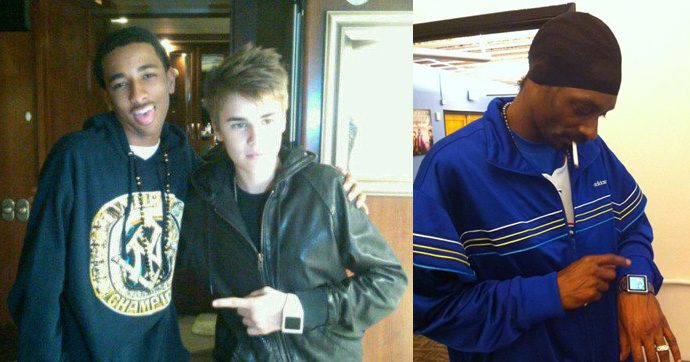 Over the past month, I spent several weeks testing the battery of an Apple watch. Not the Apple Watch, of course, but the first product Apple released with the option of being worn like one: the sixth-generation iPod nano. Back in 2010, Steve Jobs mentioned during the “instantly wearable” nano’s introduction (video at 26:30) that one of Apple’s directors planned to use it as a watch. That brief aside directly inspired the creation of nano watchband makers Lunatik and Hex, as well as simple, cheap bands from Apple accessory specialists including Griffin, Incipio, and SwitchEasy. A year later, Apple updated the nano’s software to expand its watch functionality, adding “16 new digital clock faces and improved built-in fitness features.” The nano-as-watch test was at least somewhat successful; Hex even shared pictures showing Snoop Dogg and Justin Bieber wearing its nano watch bands.

Today, Apple is three weeks away from releasing the “real” Apple Watch — a product that clearly shares the old iPod nano’s DNA, but was thoroughly redesigned from top to bottom. Yet despite including a battery that’s around twice as powerful as the nano’s, the Watch is promising only 18 hours of typical battery life, maxing out at three days if used solely as a watch in a low-power mode. So when I ran a “watch-only” test of my used four-year-old nano and found that it ran for just over three weeks, keeping perfect time without ever touching a charger (or synchronizing with an atomic clock), I was genuinely surprised. It turns out that Apple really optimized the nano to work well as a timepiece without requiring constant recharging. So what happened with the Apple Watch?…

Though this point has been obscured by the Apple Watch’s fashion-focused marketing, it’s true: the Watch is an iPod under a different name. It was developed by Apple’s iPod Software team, one of its code names was “Nano,” and — despite being based upon iOS rather than the iPod nano’s Pixo OS — the Apple Watch SDK contains numerous Nano references (as shown above). If the iPod name wasn’t synonymous with years of declining sales, and Tim Cook was less interested in launching “new product categories” than resuscitating old ones, the Apple Watch could easily have been called the iPod Watch. It still has the core features of the nano, albeit with a substantially new interface. 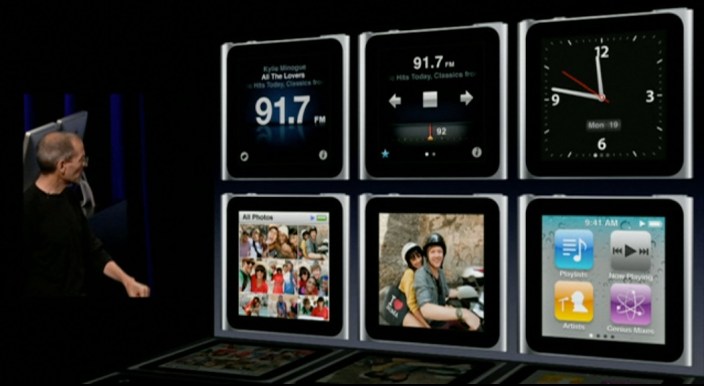 It’s also important to understand what Apple was and wasn’t attempting to do with the iPod nano back in 2010. At the time Steve Jobs introduced it, the new nano was pitched as the first wearable version of a popular, fitness-friendly media player. Jobs noted that the nano’s built-in pedometer and Nike+ support were bolstered by its built-in clip — “no more armbands,” he said — and could play music for 24 hours. Like every prior nano, this one was an iPod first and foremost, so even though Jobs pointed out the clock functionality, there wasn’t any discussion of the device’s lifespan if it was purely used as a watch. Instead, he just lit the fire of possibility under that one, letting watchband makers experiment with all kinds of form factors and price points. With the $130-$140 Lynk (now $35 to $38) at the top of its lineup, Lunatik was the rare developer willing to sell bands that were nearly as expensive as the nano itself. 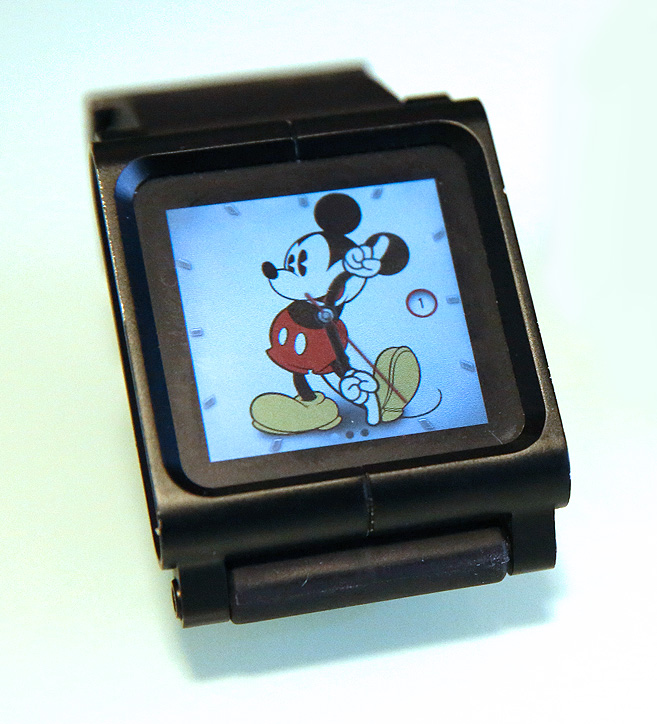 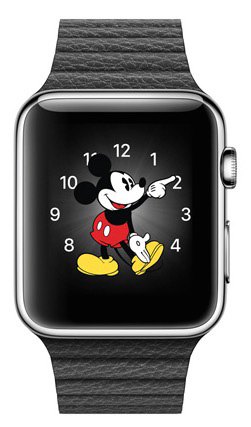 Given Apple’s design heritage, it’s not shocking that the $149 square-faced nano actually has a lot in common physically with the $349 Apple Watch Sport. The nano’s aluminum body, glass face, and side-mounted, pill-shaped button all found their way into the entry-level Watch, as did its basic dimensions. At 1.48″ tall by 1.61″ wide by 0.35″ deep including its clip, the nano is pretty close in size to the 42mm Apple Watch, which measures 1.65″ tall by 1.41″ wide by 0.41″ deep without a clip. They look most different from the front because Apple shifted from a square screen to a taller rectangle, and from the side because wrist wearability, water resistance, and simple charging became design priorities. 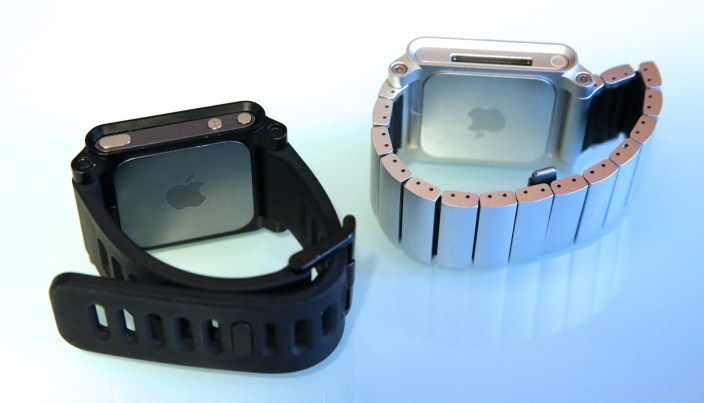 Apple’s designers and engineers didn’t spend years of development time just to give the Watch softer, more organic edges and the ability to attach wrist straps — they actually changed almost every external component of the nano to something either better or more appropriate for a watch. For instance, the screen lost Multi-Touch, which was useless on the nano’s tiny display, and gained a more meaningful alternative in Force Touch. Two small hardware volume buttons gave way to the Digital Crown, which is a more natural and universal interface for the Watch’s various functions. Apple’s Dock Connector was replaced with a sealed magnetic charger, and the headphone port was dropped in favor of Bluetooth, both changes foreshadowed by the 2012 release of the Lightning- and Bluetooth-equipped seventh-generation nano. 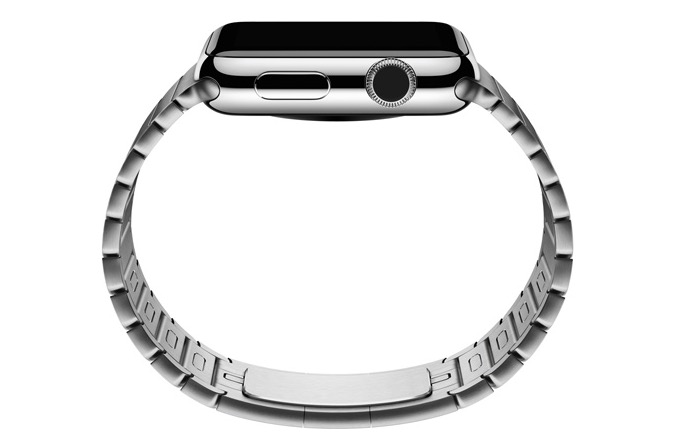 The Apple Watch received an equally comprehensive overhaul internally. Even though the 8GB storage capacity is the same, the screen was upgraded from a square 240×240 display to a higher-resolution 272×340 display in the 38mm Watch, and a 312×390 display in the 42mm model, both using OLED rather than LED screen technology. While the sixth-generation nano had no wireless features, the Watch has 802.11b/g/n, Bluetooth 4, and NFC inside — it’s purely wireless for data — plus both a microphone and speaker built in. And beyond switching from the nano’s Pixo OS to a stripped-down iOS variant called Watch OS, the Apple Watch ditches the nano-class CPU for a new S1 processor that rivals Apple’s A5 in performance. For reference, a similarly capable A5 is found in the current iPod touch, and can run the most current version of iOS. With a bigger battery and screen, the Apple Watch probably could, too. 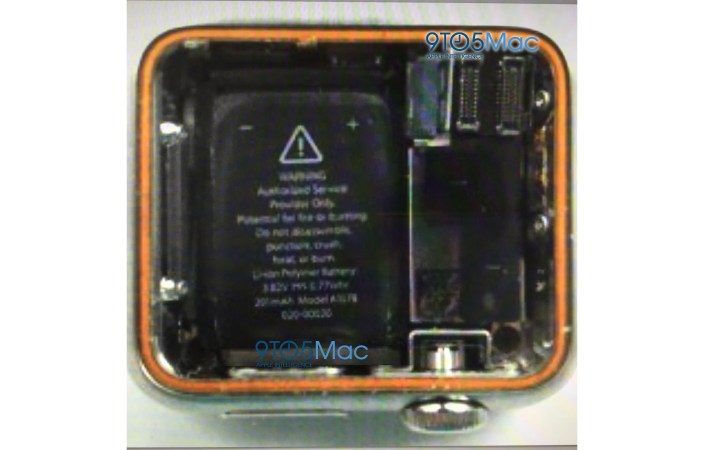 Photos suggest that the battery capacity has jumped from 105mAh in the nano to at least 200mAh and likely more in the Apple Watch, part of the reason the Watch is thicker without a clip than the nano was with a clip. So if the battery’s bigger, why is the run time so much worse? Tally up the power consumed by some of the new components, and you’ll have part of the answer. Even if the higher-resolution OLED screen consumes just as much power as the prior 240×240 LED version, the Watch’s more powerful processor, more capable software, and complete dependence on wireless communications would be battery killers. As an iPhone-dependent product, the Watch has to keep its wireless chip waiting to receive notifications from an iPhone, and the battery will take additional hits whenever notifications are registered by the screen or Taptic Engine, with much heavier drain for active use. That’s why Apple says the battery will die in 3 hours if you use it continuously as a speakerphone, or 6.5 hours if streaming music over Bluetooth. (For reference, the larger current-generation nano can stream music with Bluetooth for over 9 hours.)

This is simultaneously the first-generation Apple Watch’s blessing and curse: it spends a lot of time (and energy) doing things in the background that the sixth-generation iPod nano simply couldn’t do. It will alert you to messages, and let you respond. It will wirelessly stream music and data, as well as letting you receive phone calls. It will track your heart rate, nag you when you haven’t stood up recently, and borrow iPhone Wi-Fi and GPS data to more accurately measure workouts. Much as the iPhone was not content to be merely an Apple-branded phone, the Apple Watch is not merely an Apple-branded watch. 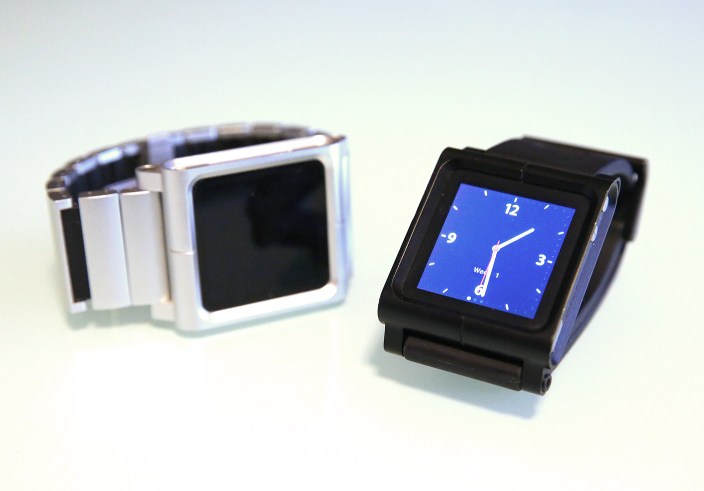 And that’s why the iPod nano both is and isn’t a fair benchmark for the Apple Watch’s battery performance. If you take the words “Apple Watch” literally and expect Apple’s Watch to outperform a $20 Timex as a maintenance-free time-telling device, you’re going to be disappointed after the first day. Apple can do better — and demonstrably has already done better with the nano — at creating a wearable device that continuously and accurately tells the time. But to Apple, this design and engineering exercise has been about redefining the value of watches at a point when large numbers of people are discarding them, thereby reversing an industrial decline caused in part by the iPhone. Merely tweaking the old iPod nano with a larger battery and several watch straps probably wouldn’t have been enough to turn things around.

For now, the two big questions are whether the Apple Watch’s added features are collectively capable of getting people excited about watches again, and valuable enough to justify 18-hour typical battery life. If your answer to the latter question is no, and you’re just looking for a reasonably-priced Apple product to wear, the sixth-gen nano’s three weeks of continuous watch run time make it a solid alternative. It’s still being sold on eBay and Amazon, alongside plenty of fancy bands that are now dirt cheap. But if you’re willing to buy into Apple’s vision for the future of watches, and OK with nightly recharging as a consequence, pre-orders for the Apple Watch start April 10th.