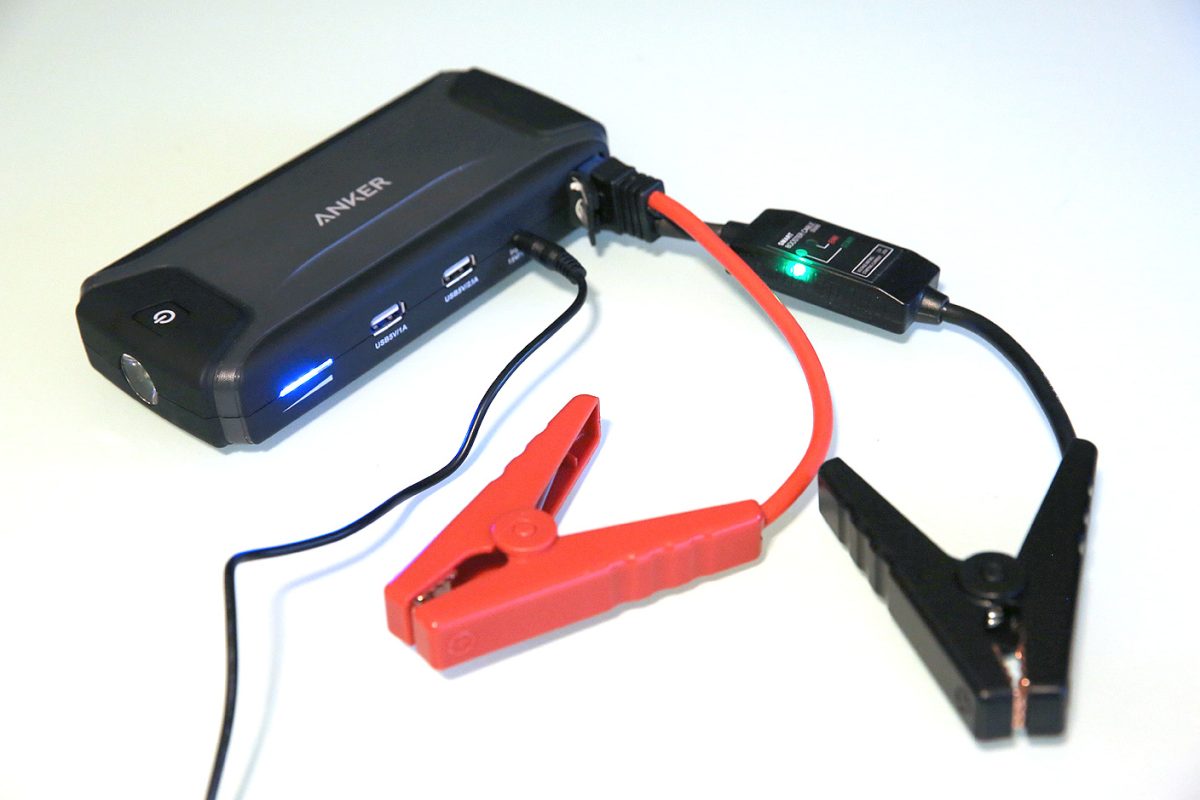 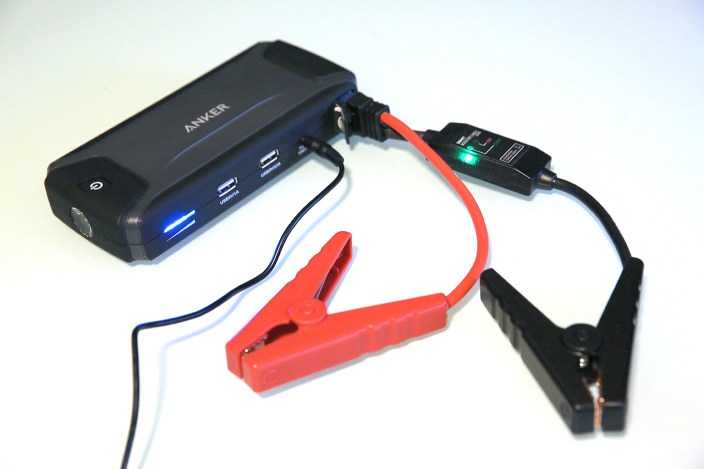 Anker specializes in accessories that deliver uncommon value. Like gigantic batteries that cost as little as small ones. Six-port USB chargers that are less expensive than two Apple one-port chargers. And iPhone battery cases that outperform rivals sold for twice the price. So it’s only natural that the company would leverage its power expertise to go beyond resuscitating little Apple devices and assist with real emergencies. With roughly the same footprint as its Astro E7 — a battery capable of fully recharging any iPad Air twice — the same-priced Jump Starter Portable Charger ($80) goes in a slightly different direction. You still get a pretty big 10,000mAh battery that can charge two Apple devices at once, but instead of E7’s third USB port, Anker includes jumper cables that can bring dead cars back to life.

Like all of the Anker products I’ve covered, Jump Starter is thoughtfully designed, efficiently packaged, and aggressively priced relative to competing products. Moreover, unlike some of the cobbled-together 3-in-1 accessories I’ve tested, its feature set actually addresses a related collection of problems a driver may have. But it’s not as much of an iPad-charging powerhouse as Astro E7; it’s best-suited to iPhone users. So is it the right battery pack for you? Read on… 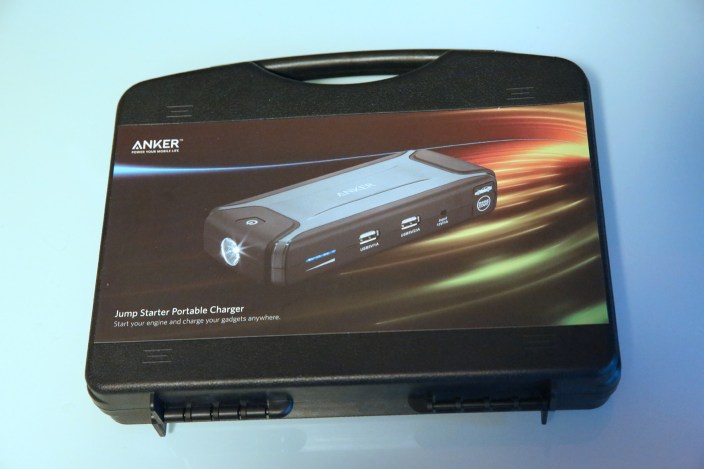 Most of Anker’s accessories come in nice cardboard packages that I really appreciate for their minimalism and recyclability. Jump Starter takes the same concept further by not requiring you to dispose of anything: the packaging is a solid, latch-shut plastic box that can keep all or some of the included pieces safe in your car, with a handle for easy transportation. Combined with the roughly 6.8″ by 3″ by 1.2″ Jump Starter battery itself, which has been ruggedized with hard matte plastic and rubber bumpers, there’s a very good chance that the components here will look very close to new after extended use. 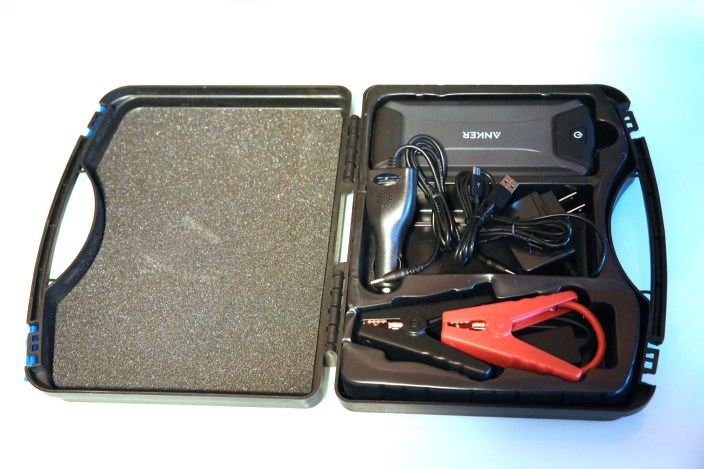 By contrast with Anker’s Astro E7, which includes only a battery, drawstring carrying case, and micro-USB cable, Jump Starter includes a 1-Amp wall power adapter, a 0.8-Amp car power adapter, and jumper cables, plus a micro-USB cable and the aforementioned box. These extra components substantially explain why Jump Starter’s battery is 10,000mAh versus the same-priced Astro E7’s 25,600mAh cell; a separate version sold for $10 more bumps the power up to 12,000mAh if you need the extra juice. One of my only two Jump Starter gripes: both of the included power adapters are lower-powered than they could be, so Jump Starter requires 3-4 hours to recharge using its circular 1-Amp power input. By comparison, Astro E7 recharges at 2-Amp speeds and uses a more common micro-USB connector. 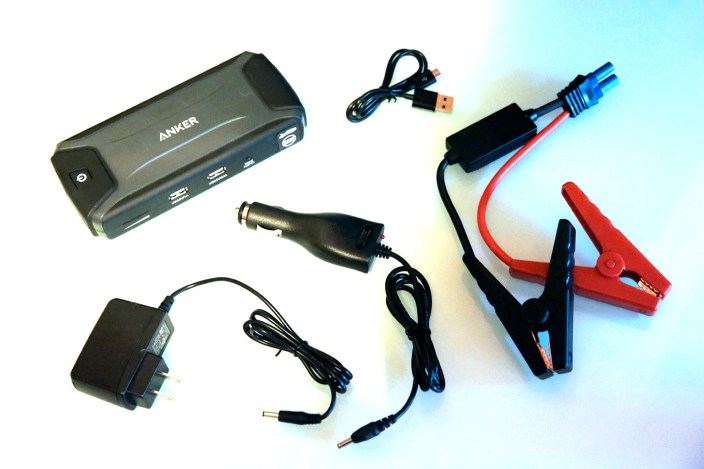 Unless you have a car with a finicky battery that you’re not planning to replace, most of Jump Starter’s use will be with USB-connected devices, and even for this purpose, it’s better-equipped than many $80 USB batteries. Anker’s 10,000mAh cell has enough energy to fully recharge any iPhone (including the iPhone 6 Plus, shown for size comparison purposes below) twice, with smaller iPhones recharging roughly three times. If you’re planning to use Jump Starter only for emergencies, that’s enough iPhone power to last for a full day of active calling, more than enough talk time to get out of most emergency situations. 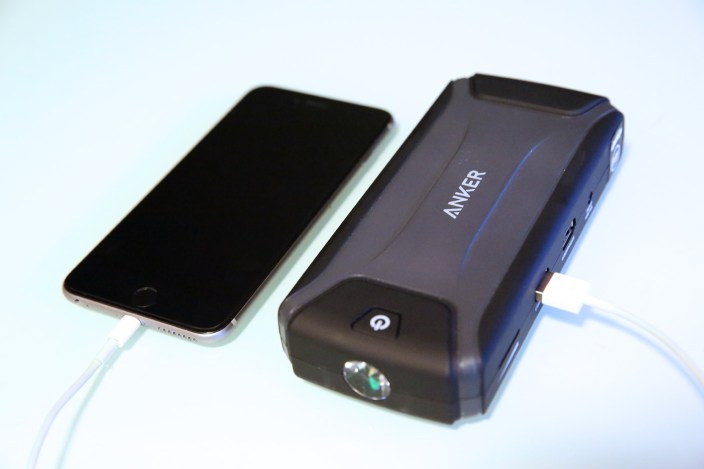 On the other hand, Jump Starter’s iPad performance isn’t as amazing. I tested it with a completely discharged first-generation iPad Air, and found that it was able to restore 97% power — very close to a full recharge. The iPad Air 2 will receive a full recharge with a little juice left over. But even though one of the two USB ports promises iPad-friendly 2.1-Amp output, versus the other at 1-Amp output for iPhones, both ports actually ran at 1-Amp speeds. It took the better part of a day to recharge the iPad Air using Jump Starter, which definitely is not the case with Astro E7. 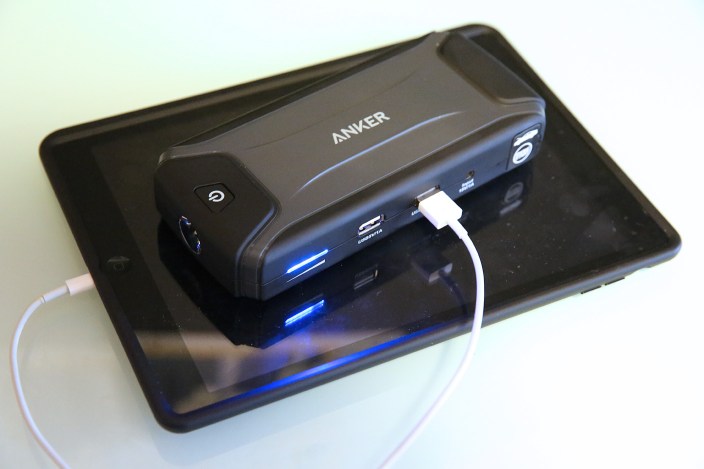 Anker did significantly upgrade one element found in Astro E7 and a surprising number of other USB batteries: the flashlight. I often feel that LED flashlights built into batteries are gimmicky — a “feature creep” item that companies include because they can, rather than for a defined purpose. But Jump Starter’s flashlight has an obvious virtue in emergency situations, particularly if you discover that your car battery’s dead at night. As shown below, Anker has boosted the light’s power significantly over Astro E7, enabling it to serve as a very bright and large source of illumination; tapping the unit’s power button lets you cycle through solid light and two speeds of emergency strobing. Again, it’s a thoughtful and practical little bonus feature. 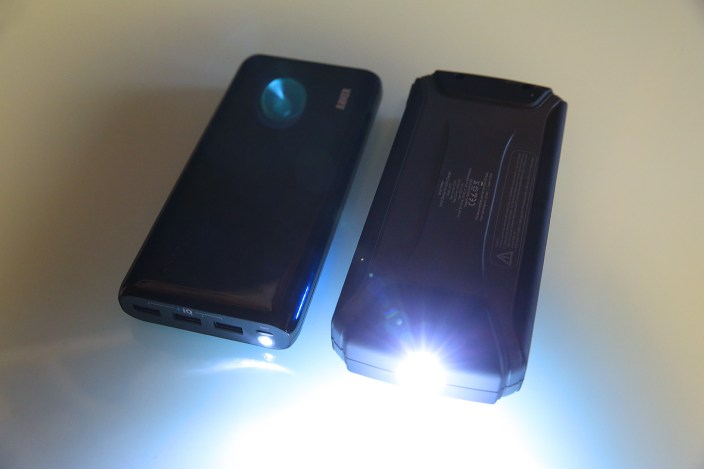 Jump Starter’s signature feature is its ability to jump start a car, and though there are caveats, it’s capable of handling common situations. When you connect the included jumper cables, it switches automatically from the 5V/1A and 2.1A output needed by Apple devices to the 12V/400Amp output needed to start cars, with what Anker says is enough energy (when fully charged) to jump start 3-Liter gas or 2.5-Liter diesel engines 10 or more times. It’s also worth noting that only one of its four blue bars (25% power remaining) needs to be filled for Jump Starter to work, which means that you needn’t worry about topping it off every day or week; the included car charger can be used for this purpose if you’re concerned. A light on the charger lets you know that it’s ready to go. 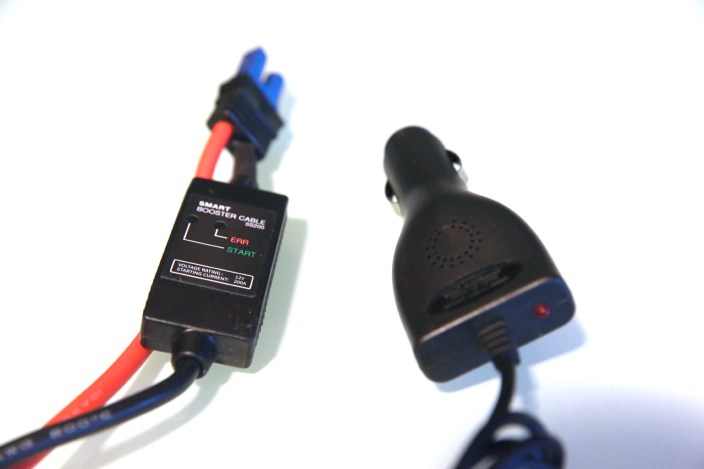 I waited for a car battery failure for two months before reviewing this unit, and (unfortunately?) wasn’t able to test the feature myself. But the consensus from Amazon reviewers has been extremely positive, including reports of successfully jumpstarting everything from four wheelers to small and mid-sized cars with both this unit and its larger brother. Big trucks can be charged as well, though they’ll drain Jump Starter’s power reserves faster. A relatively small number of people have had jumper cable length issues with specific vehicles, but with an overall rating of 4.7/5 stars, the satisfaction levels here are high. If your car battery looks like the one shown in the photo below, the cable length should be fine. 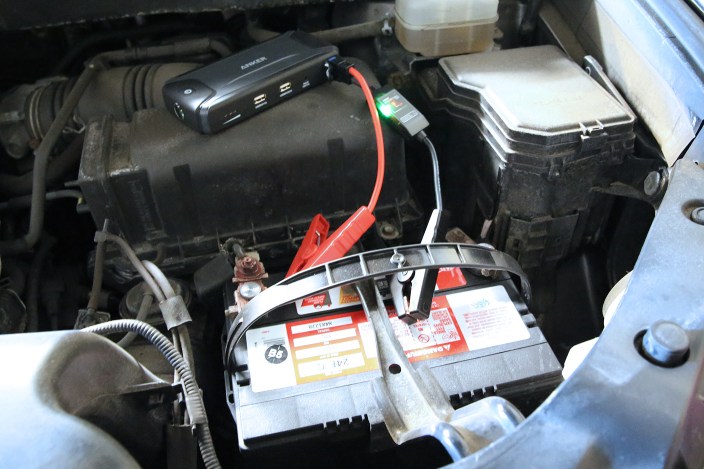 If I was personally picking between Anker’s Astro E7 and Jump Starter batteries purely for iPad use, Astro E7 would certainly be the easier choice: it delivers more Apple device recharging power at faster speeds for the same price point, while possessing a nearly identical footprint and markedly less thickness. But Jump Starter isn’t just an iPad battery. Users in need of a true “on the road emergency” battery will find everything they might need: the ability to bring a car back to life, enough spare power (and speed) to refuel a dead or dying iPhone, and a good flashlight with the option of signaling flashes. You can select the option that’s best for your personal needs, but if jump starting a car is one of them, the right choice is obvious.