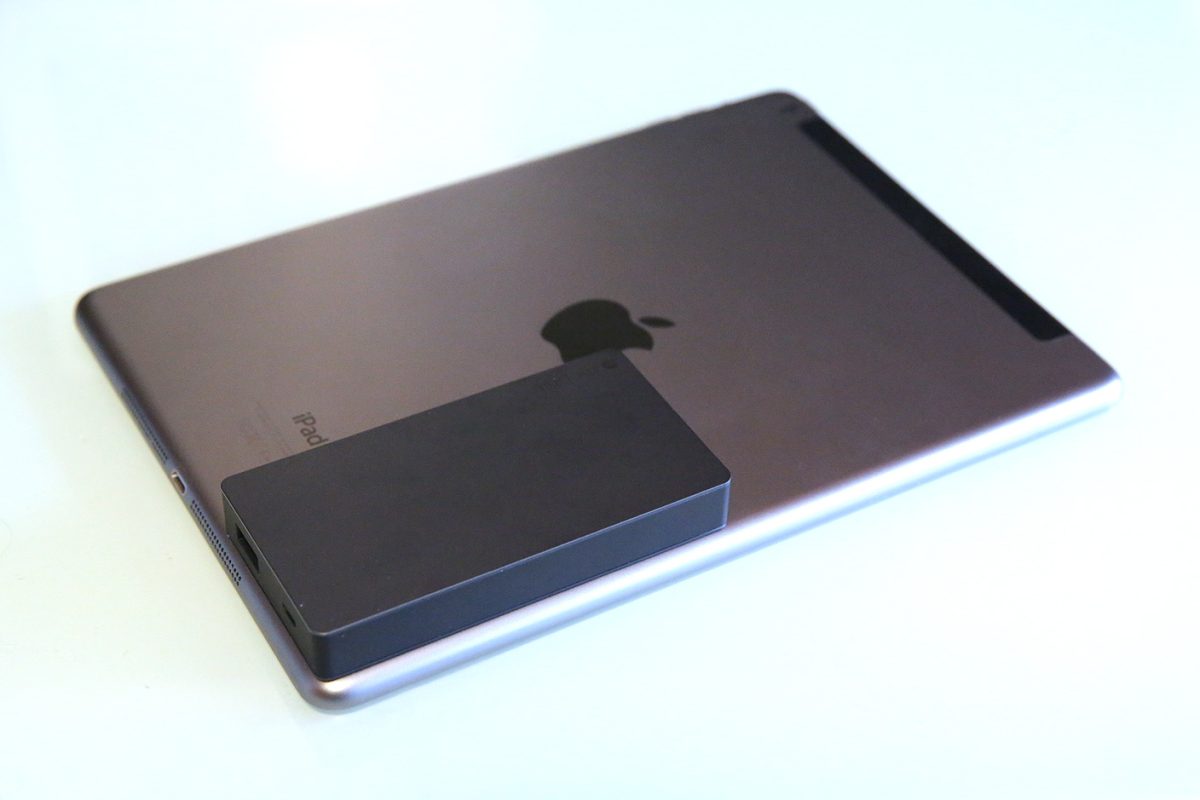 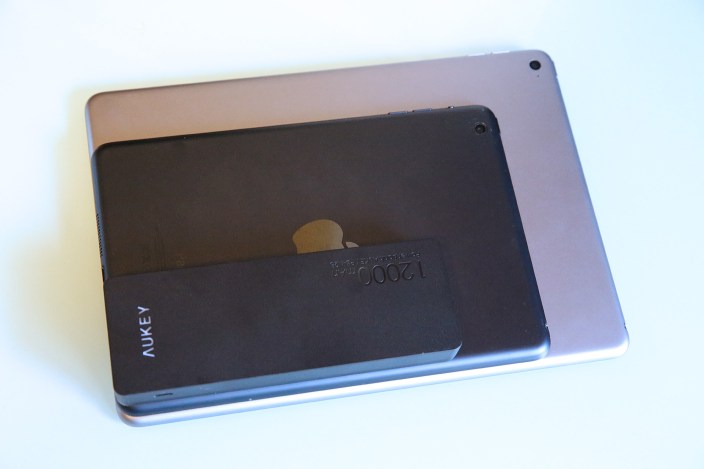 Last month, budget charging accessory maker Aukey released PB-N30, the first external battery with a female Lightning recharging port. For only $15, PB-N30 seemed like a steal given its 3,600mAh capacity — just right for use with any iPhone — but wasn’t capacious enough for power-hungrier iPads. So Aukey has released PB-N28 ($25) as a solution for tablet users, remarkably equipping it with over three times the power for only $10 more.

PB-N30 is an upgraded sequel to the company’s older PB-18, which stuffed a 12,000mAh battery into an iPhone 5-shaped enclosure. While the new model’s capacity is the same, PB-N30’s USB ports jump from 2.1-Amp/1-Amp charging to 2.4-Amp/1-Amp support, and it has a more neutral design that neither sticks out nor knocks off an Apple product. Not surprisingly, it cuts a corner or two to achieve its super-low price… 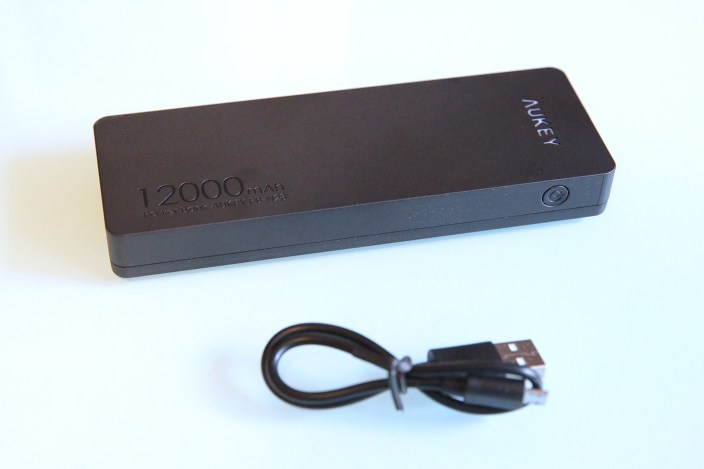 It’s fair to call PB-N28 a low-frills battery. Measuring roughly 6″ long by 2.2″ wide by 0.7″ thick, the jet black plastic battery pack hides a three-color light under its top Aukey logo, while its capacity and model number are embossed on another top corner. In almost unreadable text in one corner, the bottom has specs, notably including a 2-Amp maximum power input for recharging, and 3.4-Amp maximum output. Unlike PB-N30, which shipped with a carrying case, a suction pad, and an integrated Lightning port for recharging, PB-N28 arrives with only one thing: a micro-USB cable, which gets connected to a micro-USB port to refill the cell. 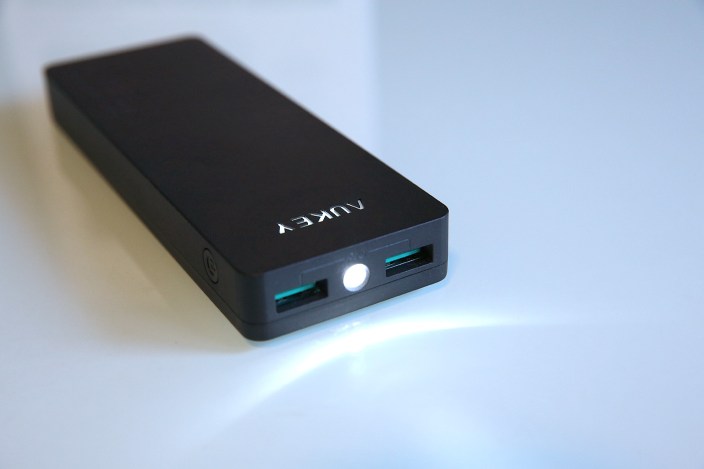 Two things happen when you tap the power button: first, power is activated to the twin USB ports, and second, the illuminated Aukey name glows white if the power’s between 60-100%, green between 20-60%, and red between 0-20%. Hold the power button down and you’ll turn on a modestly useful LED flashlight between the ports. PB-N28’s light behavior changes when it’s connected to its micro-USB cable for recharging, turning red to indicate all stages of “not full,” then white when it’s full. Just like PB-N30, which achieved a super-low price by using a similar three-color power indicator, PB-N28 doesn’t provide a granular enough sense of its charging status. It’s an issue for a 3,600mAh battery, and a bigger one for a 12,000mAh battery. 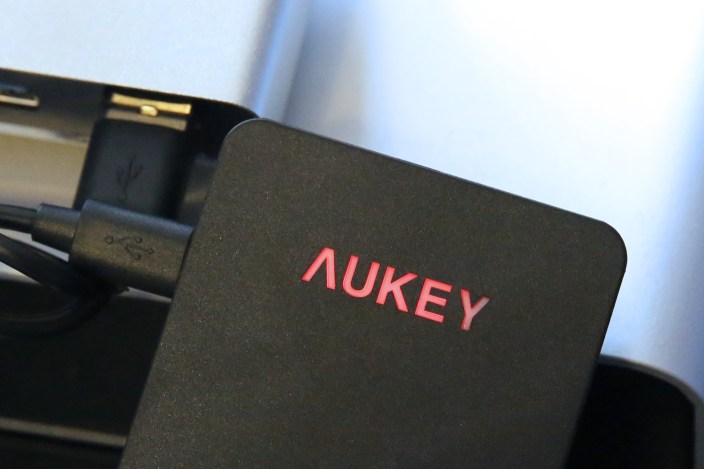 That said, PB-N28 offers an incredible amount of power for its price. The 12,000mAh cell is capable of fully recharging any iPad Air or mini model at least once, if not more. In my tests, it hit exactly 100% on a first-generation iPad Air before stopping, and wouldn’t go a point further once the Air was partially discharged. Since the iPad Air 2 and all three iPad minis have smaller batteries than the first iPad Air, you can be sure that you’ll get more than a complete recharge when using any of them with PB-N28. That’s great peace of mind for $25. The 0-100% recharging time of 4 hours and 16 minutes was right in line with expectations, and each USB port uses “AiO” power sensing to auto adjust from 0.5-Amp to 2.4-Amp depending on the Apple devices you connect. With the 3.4-Amp total output, one port can be at 2.4-Amp for an iPad and the other at 1-Amp for an iPhone. 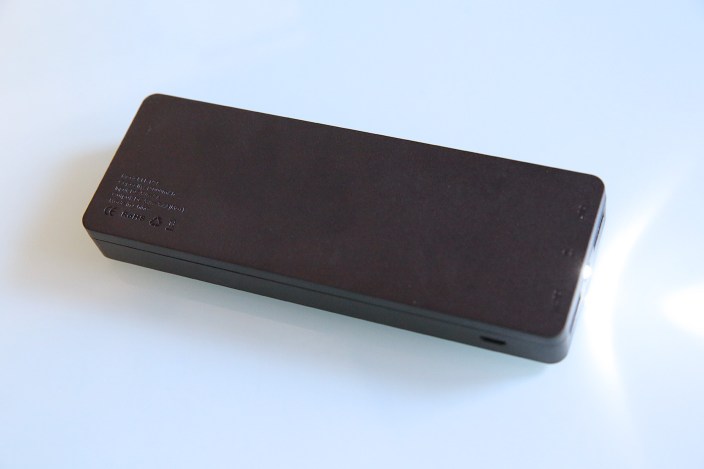 Aukey says that the battery can be recharged from dead in 6-7 hours with a self-supplied 2-Amp or faster power source, and that’s a fair statement, though it’s not super fast. In one test, after the battery arrived with its three-color power indicator white, supposedly indicating a 60-100% charge, it took three and a half hours to finish recharging with a high-speed USB port. Another test, when the battery was fully discharged, took around 6 hours with an iPad power adapter. This isn’t surprising given the size of the battery, though the use of only two colors on the three-color power indicator means people could spend a long time waiting for a flip from red to white to happen. You’re best off just plugging PB-N28 into an iPad adapter and walking away for a while. 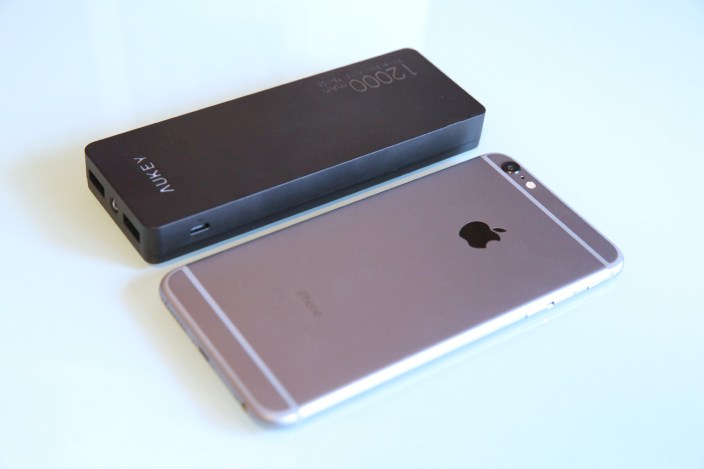 Just as was the case with PB-N30 as an iPhone accessory, PB-N28 is a standout iPad accessory primarily because of its price. Decidedly simple in execution, it offers a lot of power for the dollar — 47% of Anker’s amazing Astro E7 at 31% the price — and it’s hard to beat a $25 asking price if you’re looking for a way to completely refuel your current-generation iPad once (or iPhone several times) on the road.