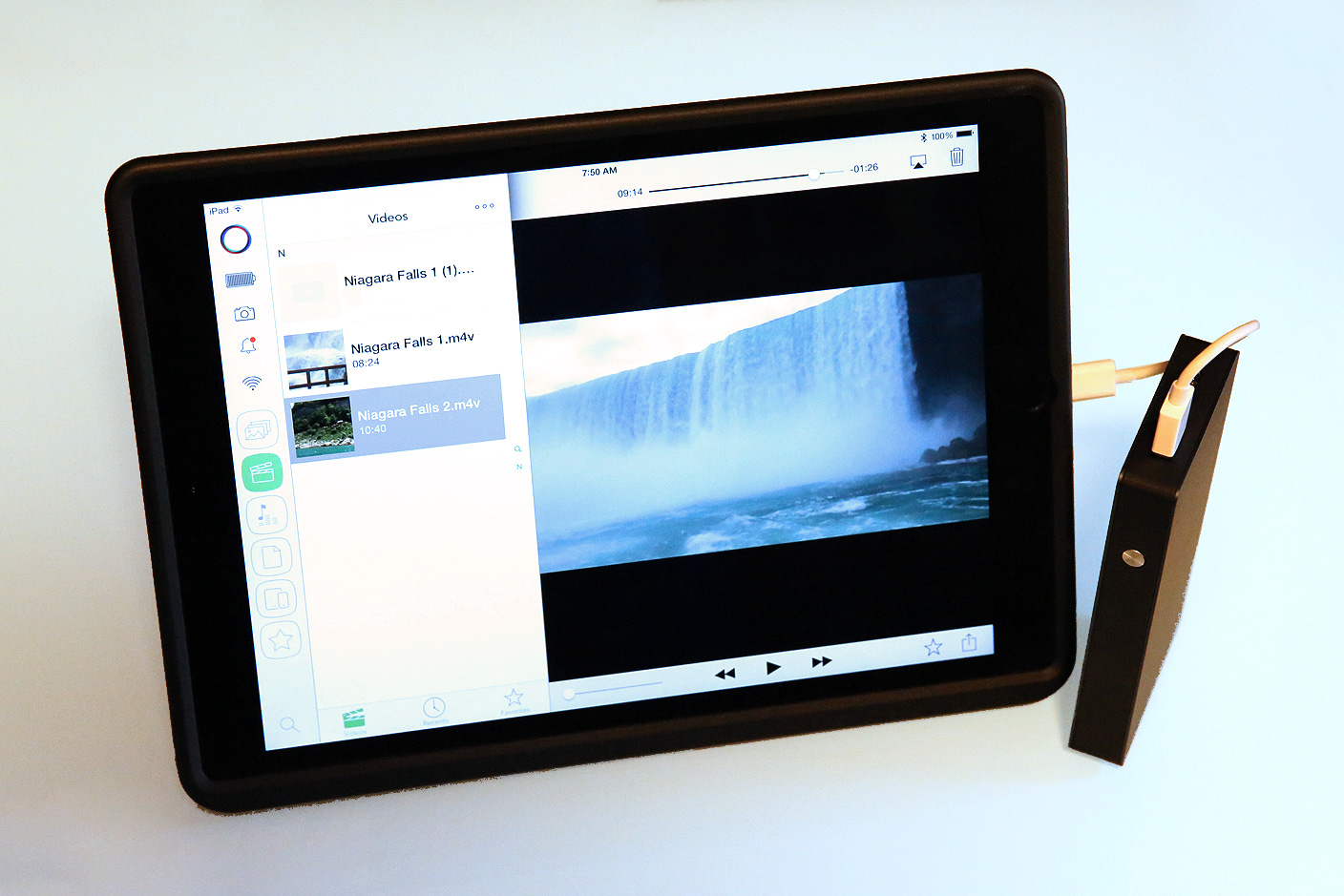 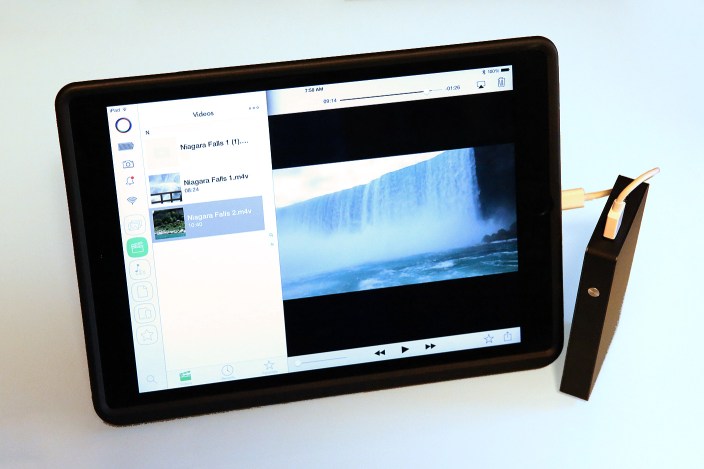 Mophie’s Juice Packs are unqualified success stories. After debuting the first Juice Pack in late 2007, Mophie became synonymous with “iPhone battery cases,” and enjoyed years of popularity despite increasing competition. But the company’s USB battery packs aren’t as well-known. Ranging from minimalist to ruggedized, Mophie’s Powerstations range from 3,000mAh to 12,000mAh in capacity, and carry hefty $80 to $150 MSRPs. Regardless of whether they’re judged by features or battery performance for the dollar, they’re hard to pick over rivals, since you can now get a high-quality 25,600mAh battery for the same price as a 3,000mAh PowerStation.

Based upon last year’s iPhone 5/5s-specific Space Packs, the brand new Spacestation is Mophie’s shot at differentiating its USB batteries from the masses. Offered in 32GB ($150), 64GB ($200) and 128GB ($300) capacities, Spacestation combines an app-managed USB flash drive with a 6,000mAh battery, which promises “3X extra battery” life. Realistically, that’s enough power for a full recharge of the original iPad mini or three recharges of older iPhones. But since 6,000mAh batteries are getting cheaper every week, Spacestation’s appeal is mostly in its ability to at least double the number of videos, music, photos, and documents that can be accessed by your iOS device on the road… 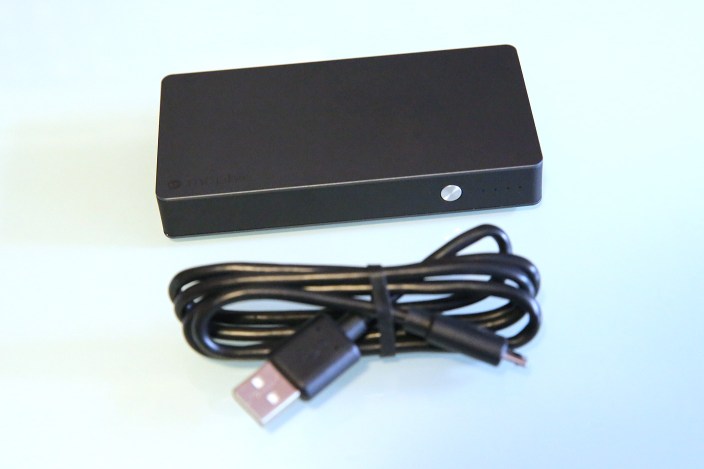 Measuring roughly 4.3″ by 2.2″ by 0.6″, Spacestation is closest in size and features to Mophie’s $80 4,000mAh Powerstation, but with the battery capacity of its $100 twin-port 6,000mAh battery Powerstation Duo. Yet despite selling at a higher price, Spacestation loses Powerstation’s fancy iPhone 4-inspired design elements, sandwiching a black soft touch rubber core between two nearly black sheets of metal. The only visual frill is a swirled metal power and remaining power button on one edge, which activates four adjacent white lights. One short edge includes a micro-USB port for recharging and a full-sized USB port for charging; a micro-USB cable’s in the box, leaving you to supply a Lightning cable for your iOS device. While it looks and feels better in person than it appears in photos, I couldn’t help but feel that the premium-priced Spacestation really should have included a Lightning cable — either in the box, or physically integrated, like Mophie’s Powerstation Plus.

If it were judged solely as a battery, Spacestation would have a hard time competing against lower-priced rivals with similar or larger capacities. I tested it with a first-generation iPad mini containing a 4,490mAh battery, which went from completely discharged to 100%, then added an additional 3% after a partial discharge, for a total of 103%. In another test, I used a completely discharged iPad Air 2 with a 7,340mAh battery inside, and was able to bring it back from dead to 67%. Both percentages were expected given the standard power loss during transfers from one battery to another. 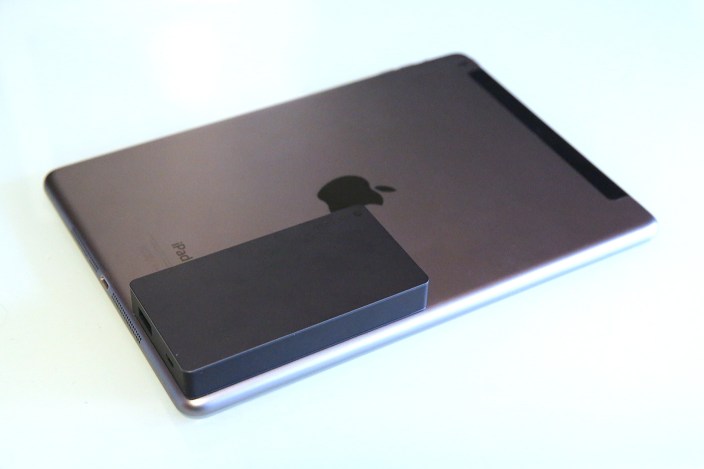 There were a couple of battery-related surprises during my testing of Spacestation. First, after discovering an undocumented Bluetooth Low Energy on/off switch in the Space app, I searched Mophie’s site and Spacestation’s included manual for an explanation, but found nothing. The app says it can use this switch “to turn on your connected Spacestation,” which doesn’t make a lot of sense given that the switch only appears when Spacestation is physically connected to the device running the app. Since Spacestation does indeed appear to have a Bluetooth chip inside, and auto-pairs with iOS devices, my guess is that something — possibly a remote trigger to start charging one device using another device — is planned for the future, though it’s hard to quantify the real-world value of such a feature. 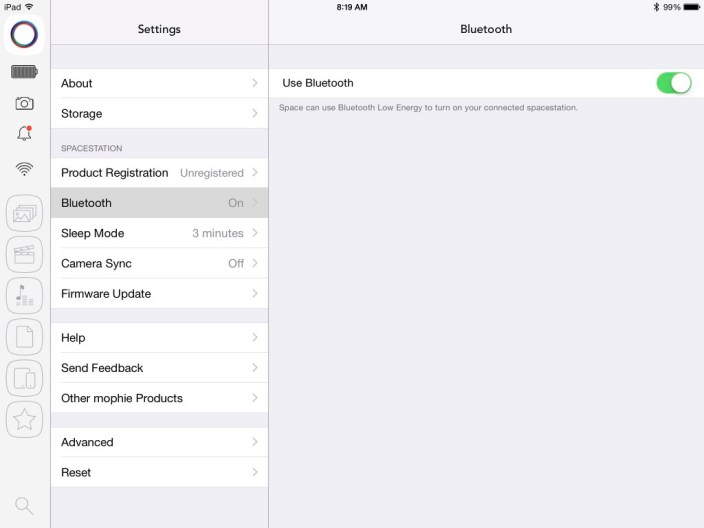 Another surprise was that Spacestation doesn’t deliver Mophie’s promised 2.4-Amp “high-current charging” output. During my test with the iPad Air 2, it took nearly 4 hours to hit the 67% recharged level, when a 100% recharge with a 2.4-Amp power source takes around 3 hours and 40 minutes. With the iPad mini 1, which can fully recharge in under 2 hours and 50 minutes with a 2.4-Amp charger, Spacestation instead took 4 hours and 17 minutes. Both times were closer to what I’d expect from a 1-Amp rather than a 2.4-Amp charger, which is disappointing, as many batteries actually charge at iPad-ready 2.1-Amp or 2.4-Amp speeds.

Thankfully, there’s more to Spacestation than just the battery. The other half of the equation is the 32, 64, or 128GB flash memory — enough to double, triple, or even octuple the integrated storage of your iOS device. There are three ways to save files to Spacestation: connect it to a computer with its included USB data cable, send files wirelessly from your computer to your iOS device using Mophie’s free Space app, or save files directly to the Space app from other sources such as your iCloud Drive. 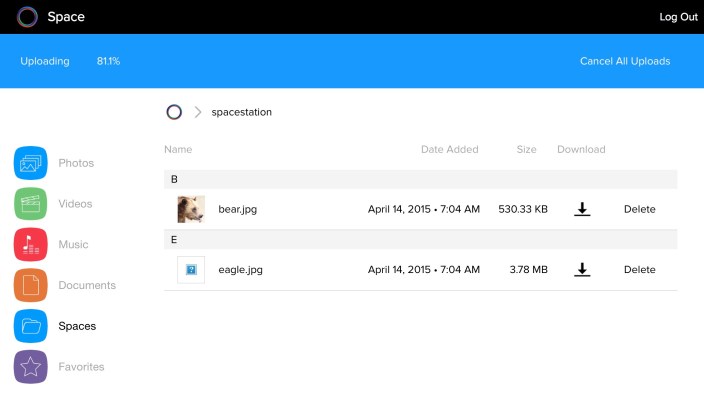 This is the web-based interface for sending files from your computer wirelessly to Spacestation. It requires zero configuration — you just look at the Space app’s web address on your Wi-Fi network and enter a five-character password to make a secure connection, then drag and drop files to upload them. Saving files isn’t super fast, but it’s an easy and reliable wireless alternative if you’ve forgotten your micro-USB cable.

Mophie’s Space app has continued to improve over the past year. The main screen of the app shows you a battery meter with granular bars indicating Spacestation’s remaining power, a Wi-Fi icon for those wireless transfers, and a collection of icons leading to Photos, Videos, Music, Documents, Favorites, and Spaces, the latter enabling you to browse the full collection of items on the drive. Space can optionally present your on-device and Spacestation libraries as a single list so that they can be browsed and accessed seamlessly, a nice feature, and also offers an overflow storage feature that continues saving Camera shots to Spacestation even when your device is out of space. If your iOS device is constantly storage-constrained, a Spacestation can be a less expensive alternative than buying a new iPhone or iPad. 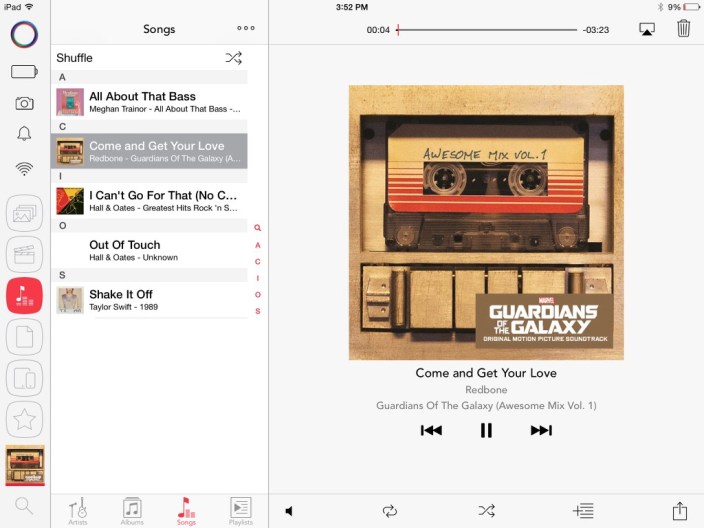 So would I recommend Spacestation? The answer’s not as simple as a “yes” or “no.” On one hand, if you’re using a 16GB or 32GB first-generation iPad mini, you can add double your battery life and double or triple your storage capacity for $150, which is less than going out and buying any replacement iPad currently available. But on the other hand, iOS-compatible flash drives such as Sandisk’s iXpand sell without batteries for $60 (32GB), $100 (64GB), or $150 (128GB), including Lightning connectors. Add to that the typical cost of a standalone 6,000mAh USB battery pack ($20 to $30), and even if you ignore the cost of a Lightning cable, Spacestation sells at a $70 to $120 premium relative to the features it offers. Consequently, Spacestation is clearly best-suited to users who so value having both spare storage and power in a single housing that they’re willing to pay a lot for the privilege. For the time being, I’d personally go with separate accessories and save some cash, but if Spacestation’s price comes down to Earth, it will be more broadly appealing; the added utility it offers over a traditional battery is obvious.