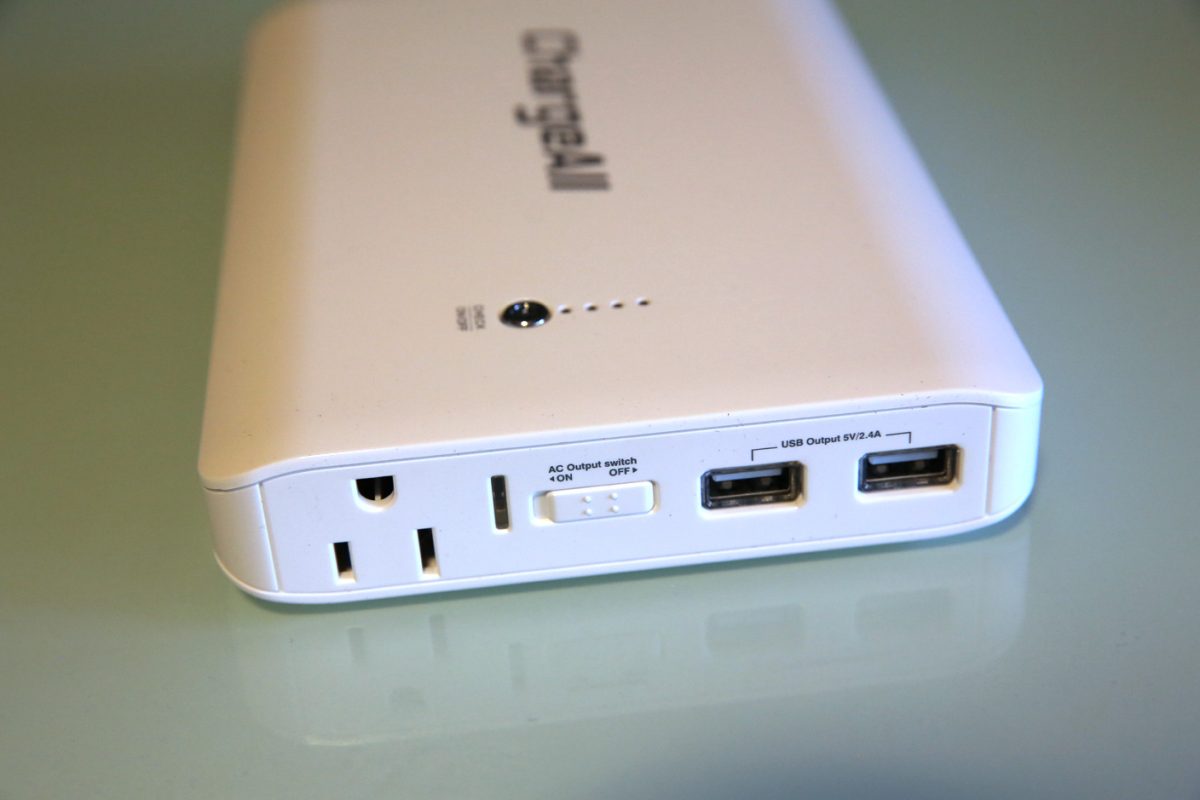 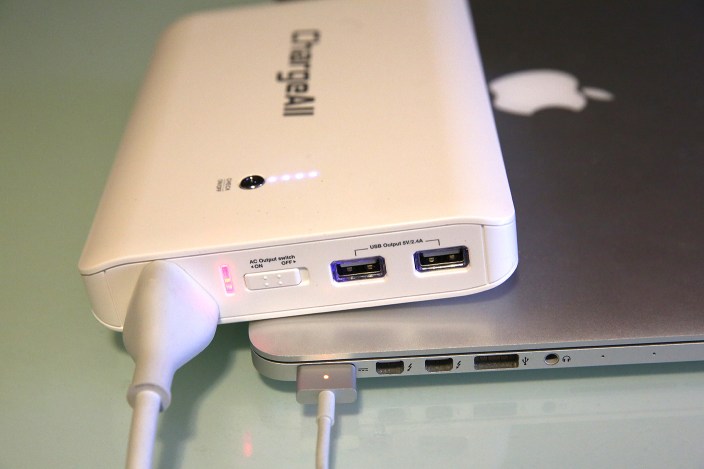 The first time I found an AC wall outlet under my seat on an airplane, I realized that I could use my MacBook Pro with its wall charger for hours, even if I’d partially discharged the battery before boarding. Later, when I rode a bus with an AC outlet onboard, the freedom to enjoy my laptop for hours made the long trip feel brief. But I’ve had far more trips without AC outlets than with them, and there have been plenty of times when my MacBook could really have used a recharge mid-trip.

That’s why I’m genuinely excited about ChargeTech’s ChargeAll Portable Power Outlet ($150-$200), which primarily exists to give you access to an AC outlet literally anywhere you might be — something that I can’t believe has taken so long to become available. There are two versions, one with 12,000mAh of power, and the other with 18,000mAh of power, either with enough energy to keep your MacBook going for hours on the road. Both units have the overcharge and short circuit protection you’d expect from a surge board — the difference is that you can toss them into a bag or a car… 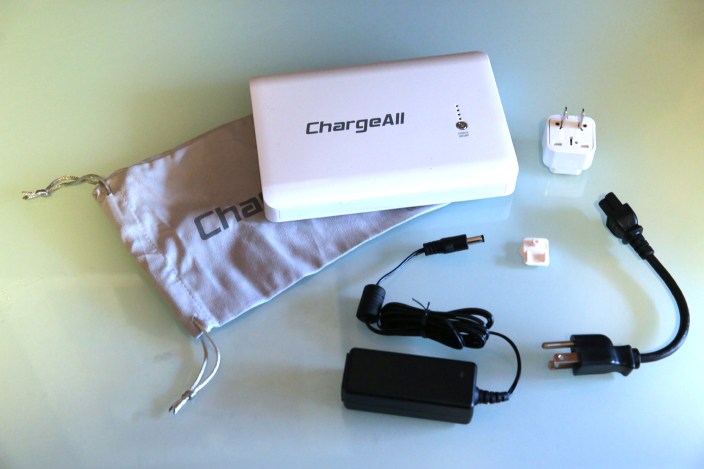 Sold in white or black, the ChargeAll units aren’t small: the 18,000mAh version I tested is 7.3″ wide by 5.1″ by 1.1″ at its largest points, slightly smaller in footprint than an iPad mini, but roughly four times as thick. There’s a power button on the top, alongside a small four-light remaining power indicator. It’s shipped with a drawstring carrying bag, a wall adapter of its own, and a converter that adapts a variety of foreign plugs to its three-prong input. International users should bear in mind that it outputs 110-120V 60Hz power from the AC port, which means that it’s fine for use with all of Apple’s laptops and pretty much anything with a switching power adapter.

One of the biggest surprises during my ChargeAll testing was the speed that the portable outlet itself is recharged from wall power using the included 40-Watt/2-Amp adapter. I’ve become so accustomed to sluggish charging that I was thrilled to see it go from empty to full in around two and a half hours, similar to the speed of fully recharging my Retina MacBook Pro. Another way to look at this: three hours before a trip, you plug your ChargeAll and MacBook in to separate wall outlets, pack them both with the MacBook’s wall adapter, and you’re ready to roll. 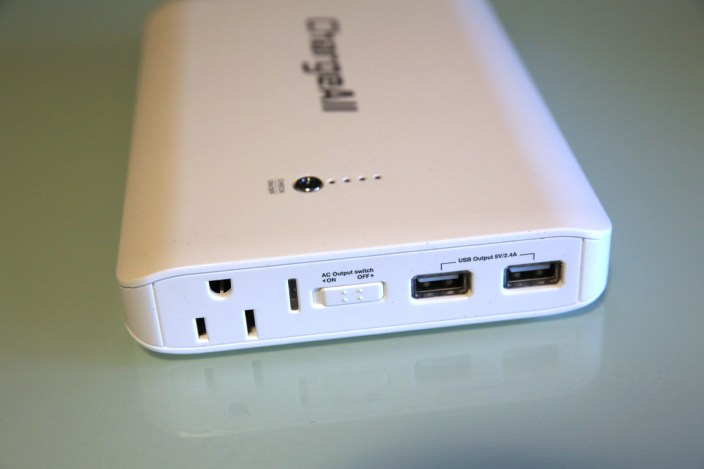 There are different ways to use ChargeAll: you could conceivably connect it to a MacBook while it’s being used, or leave it charging when the MacBook’s closed and sleeping. Doing the latter — which provides the most linear way of measuring the power it adds — I found in one test that the 18,000mAh cell took a completely discharged 13″ Retina MacBook Pro to 72% power. Oddly, in another test with the same machine in partially charged condition, it restored 66%, for an average of 69% (or roughly 7 hours of additional run time) across the tests. ChargeAll’s smaller 12,000mAh version should add a bit under 5 hours of life to a 13″ Pro; Apple’s 11″ and 13″ MacBook Airs have smaller batteries, and would expect to get even longer added run times. 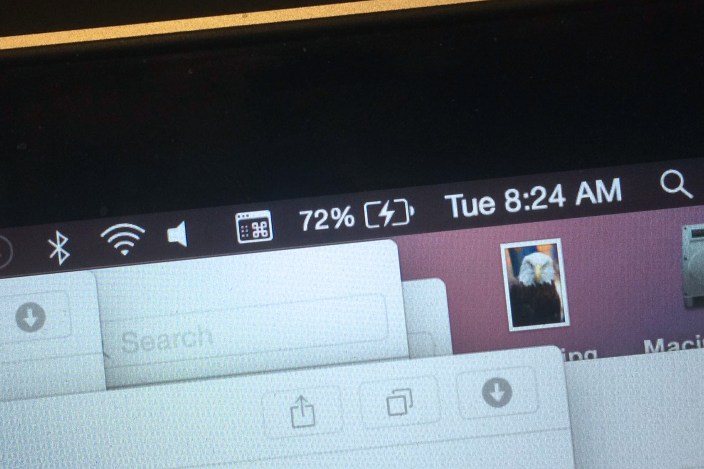 ChargeAll also has twin 2.4-Amp USB ports capable of recharging other Apple devices at full speeds. The ports glow blue while they’re in use, a surprise given that most other batteries I’ve tested try to conserve as much energy as possible. Using the 18,000mAh model, I was able to more than fully recharge a dead iPad Air 2, achieving one dead-to-full recharge and then adding 64% to a partially discharged unit in a second test, for a total of 164%. The 12,000mAh version should have enough power for nearly a 110% recharge of the same iPad, or about 100% for the original iPad Air. Since there are dozens of good iPad batteries out there at aggressive prices, ChargeAll’s not likely to be the first pick for that purpose, but as a Mac charging station with iPad and iPhone support as a backup, it makes a lot of sense. 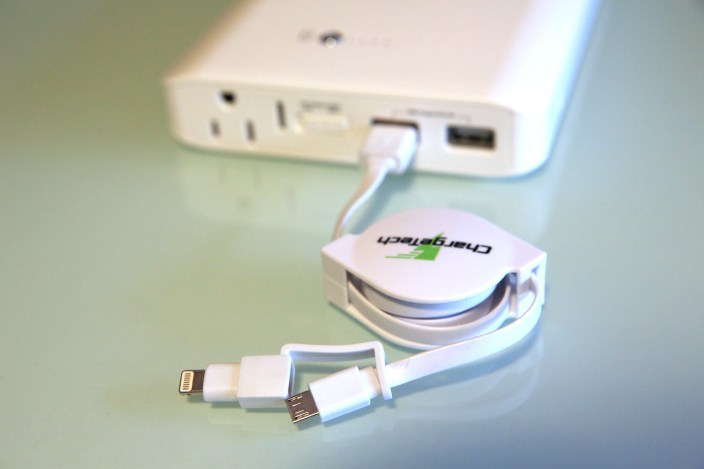 It’s worth mentioning that ChargeAll’s solution has several practicality advantages and one disadvantage relative to Gbatteries Energy’s BatteryBox. You get to use MagSafe rather than a somewhat awkward plastic clamp, get similar extra power at a lower price, and have a battery that’s not as boxy to carry in a bag. ChargeAll can also be used either as a live power source or as a recharger for the battery; BatteryBox only works as a live power source for the MacBook. That said, BatteryBox consumes less space overall than carrying both ChargeAll and Apple’s wall adapter; it also includes one 2.1-Amp USB port for iPad charging.

Given all that ChargeAll does right, my only concern is one that’s common to virtually all external charging solutions: longevity. While the accessory feels solidly made and promises a very standard 500 uses before battery issues may develop — enough to last for a couple of years of normal, near-daily use, which is appropriate to both asking prices — BatteryBox’s more restrictive “live power only” use of its battery promises twice the normal number of recharge cycles. You’ll have to choose between a longer-lasting but more restrictive solution, or one that will likely work well for a couple of years — perhaps longer — with a wider variety of MacBooks and devices. 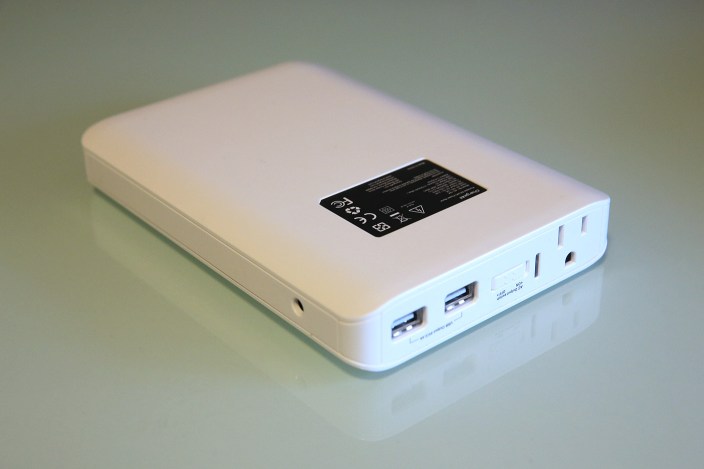 From my perspective, ChargeAll’s the easier pick. I absolutely love the fact that I can now carry an AC outlet anywhere I go, and the price points strike me as reasonable given the functionality being offered here. Overall, there’s no better option I’ve found for on-the-go MacBook recharging, and the iPad recharging is a nice bonus.