AAPL’s numbers today are going to be huge, analysts predict: double-digit growth in all but iPads

With Apple set to reveal its fiscal Q2 earnings after market close today, analysts are expecting double-digit year-over-year growth in all categories except iPads. Fortune‘s roundup says that analysts predict revenue of $56.84B, up a massive 24.5% year-over-year, and above the top end of Apple’s $52-55M guidance. Earnings per share is predicted to be $2.21, up a third on the previous year, with gross margin just shy of Apple’s top-end guidance at 39.4%.

Double-digit growth is expected in both iPhones and Macs. For iPhones, the prediction includes sales just under 56M, 32.6% higher than the same quarter last year, while Mac sales are forecasted to hit 4.7M, 13.6% up on last year …

Of course, while the market will be eagerly awaiting the actual Q2 numbers, it’s likely that the most eagerly awaited number of all is for a rather shorter period: Apple Watch pre-orders. It’s not certain that Apple will reveal these – the company has previously indicated that Watch sales will fall under an ‘Other’ category in its actual accounts, in there with iPods, Apple TVs and so on – but given the apparent success of the launch, we’re hoping that Apple will choose to at least share opening weekend pre-orders. The ‘Other’ category results that include Watch sales won’t be due out for another quarter as sales only started this month.

You can see the full Fortune analyst roundup below. We’ll of course be bringing you the actual numbers and all the news from today’s earnings call as they are announced at 2pm PT/5pm ET. 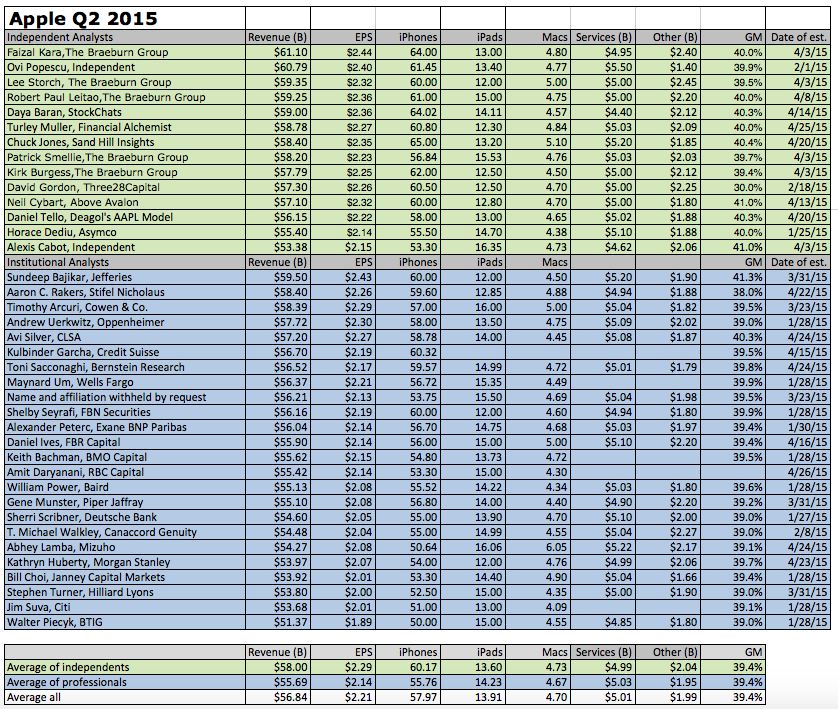