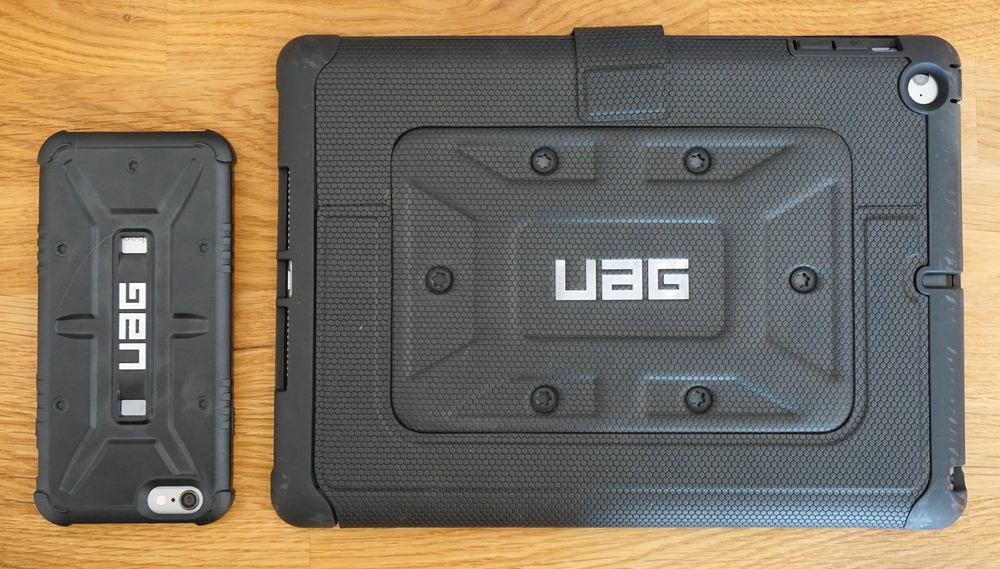 Scuff marks created during my own drop-tests …

The problem with buying a protective case for an iPhone or iPad is that you never know for sure just how protective it really is until it is needed to do its job. Even a drop-test video only shows you how well the case worked with that one drop on that one occasion.

The Urban Armor Gear (UAG from now on) iPhone and iPad cases are a little different. They are certified to a military standard known as MIL-STD-810G 516.6. In this test, a device is dropped from a height of four feet – the typical fall for a device dropped while using it – a total of 26 times. The tests cover falls into each corner, the face and back. To pass, the device must remain fully functional afterwards, with no damage at all to the screen.

This isn’t the same as no damage at all, of course, but it certainly lends confidence. And if that weren’t enough, UAG decided to demonstrate its confidence in the case by dropping an iPhone from space – video below …

The best way I can describe the look of these cases is to say that they very much appear to be designed with military use in mind. They look rugged and basic. The fake bolts look perhaps a little tacky, and alignment of switches and buttons is very slightly vague (though everything works perfectly).

The rubbery feel is quite pleasant to the touch, but the biggest surprise is the weight: the iPhone case feels like it weighs nothing at all, in contrast to what you’d expect from such a tough case. I weighed it at just 30g. The iPad case weighs 360g (iPad Air 2 model), but still feels lighter than you think it ought to.

The iPhone 6 case is available in a choice of six colors: black, white, silver, blue, orange and pink. The iPad Air 2 case in black or red, and the iPad Air in any color you like as long as it’s black.

I know, I know, you just want me to get to the video, dropping it from space. UAG used a weather balloon to lift it to a height of 101,000 before the balloon burst and it fell back to earth. ‘Space’ is rather an exaggeration, the technical definition being an altitude of 50 miles according to NASA. But you can clearly see the curvature of the Earth, and it’s quite a long way to drop an iPhone, so we’ll cut them some slack. Fast-forward to 1m 25s for the actual fall.

The video is of course just a PR stunt. The iPhone would quickly reach terminal velocity if thrown out of a plane at a far lower altitude, and it lands in a rather soft-looking field, but hey, it’s fun to watch.

Since repeated drop-tests in a variety of manufacturer’s cases probably isn’t recommended treatment for any iDevice, I limited myself to my usual tactic of taping inside it a bag of coins that weigh the same just to see how the case itself stands up to drops. I didn’t succeed in doing more damage than a few scuffs.

The cases are very slightly stretchy, and you simply snap – or perhaps spring, given the rubbery material – your device into the case. Insertion is easy, removal slightly fiddlier given the tight fit, but nothing to write home about.

As you can see from the photo above, the sides of the case sit a millimeter or two above the screen, and this protects the screen when the phone lands face-down. A semi-rigid plastic screen-protector is also included.

Ports remain accessible: I was able to plug in both headphone and Lightning cables without any trouble. Same with buttons and switches. Power and volume buttons are covered by rubber flaps, and work fine through them; the mute switch is exposed but well-recessed.

However, one reader did note that the case covers the iPhone microphone. I make so few voice calls, I didn’t experience an issue with this myself, but it’s worth noting if you do.

The iPad case has a screen cover flap, which has a simple magnetic closure. It’s basic, and a little untidy, but it works: 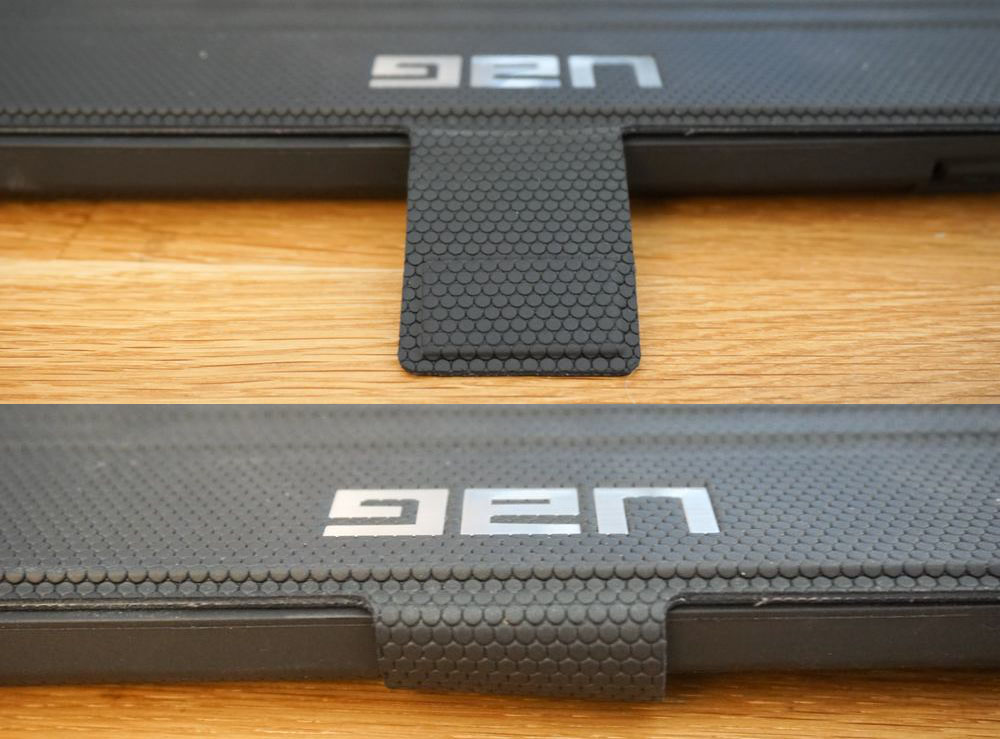 The case is similarly basic when used as a stand, but again, it works. 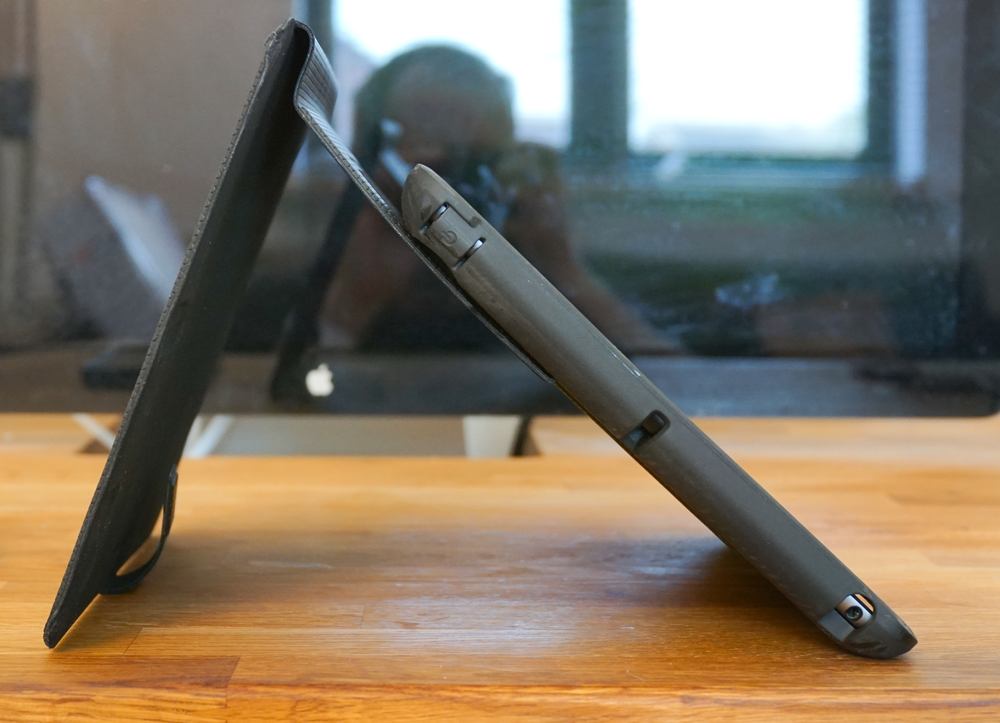 These aren’t cases for the style-conscious: they look and feel basic. But they probably are the cases to you if you are either habitually clumsy, or going to be using your iPhone or iPad in conditions where a drop is more likely – perhaps while running, cycling or similar.

Although the military-spec drop test offers no guarantees against cosmetic damage – the requirement is simply that the device remain functional afterwards – it does specify that the screen remain undamaged, and that’s the greatest risk. If the case protects against that, it’s likely the casing will also remain undamaged. Pricing seems reasonable for the degree of protection offered.