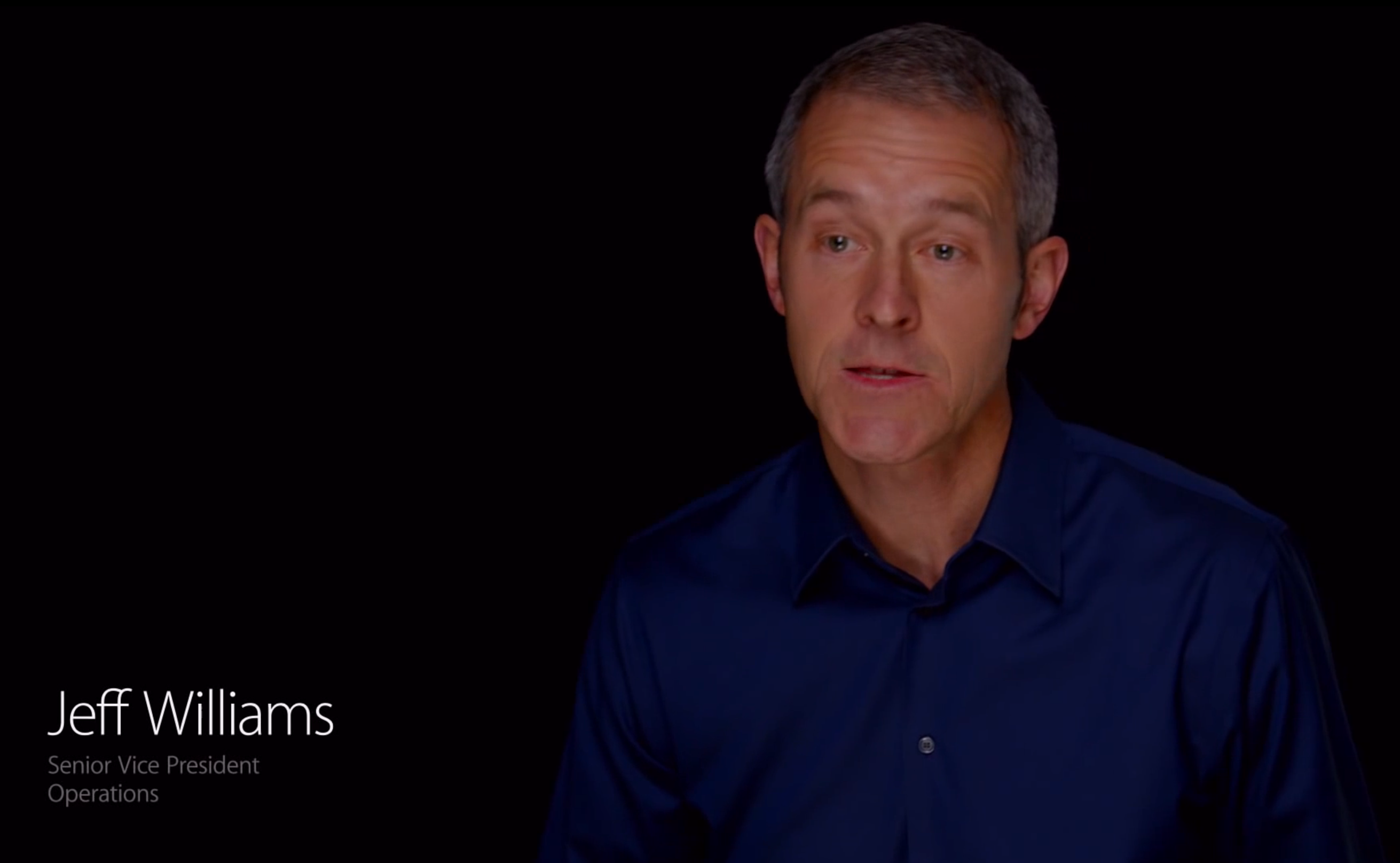 Apple’s Senior Vice President of Operations Jeff Williams is being interviewed this morning at the Code Conference south of Los Angeles, and we are here live on the scene. As a key player in the development of the Apple Watch & ResearchKit, as well as in the operations for Apple’s product launches over the past several years, Williams will likely be able to shed interesting new light on several Apple-related topics. We’ll be providing a full-live blog below of the interview, which begins around 10:30AM Pacific Time/ 1:30 PM Eastern Time.

– Interview starting in around 5 minutes.

– Walt: Why can’t I get some holograms on my Apple Watch? Jeff Williams jokes its coming.

– Walt: How’s the Apple Watch doing? Jeff: It’s doing great, better than I expected. I didn’t think it would happen this quick. Williams explaining that it allows people to be more present. Williams says a dentist no longer has anxiety to pull out his phone. We’re having a blast.

– Williams: We sold a lot, but not enough. I can’t give you the number.

– Walt: Why wasn’t it a traditional release with sales numbers? Williams: We decided out of the gate not to release Apple Watch numbers. We spend too much time releasing numbers as is. “If it reaches the materiality levels, maybe we’ll change that.”

– Walt: Do you think wearables will become a fundamental place for people to interact and communicate? Is it a long term thing? Williams: I think there’s great inevitability in technology moving to your body. We chose the wrist, very carefully. I think there is historical precedence for this. If you look at timekeeping, it started with the clock in town center, then moved to the grand father clock, then moved to portable clocks. Then it moved to a pocket watch. I think there’s a very different experience on the phone.

– Walt: Let’s talk about apps, the core apps (fitness, messaging), and there are third-party apps that vary widely. Walt asking if Apple Watch 3rd party apps will improve, says developers unsure what to do. Williams: 4000 third party apps. I think the 3rd party apps are going to get much better when developers can write code natively to the watch. Apple will release a preview of the native Watch SDK at WWDC. Williams says SDK will give sensor access, Digital Crown access, more independent games. Will come out of preview in the fall, much like iOS updates.

– Walt: Did you wear the competition’s devices during Apple Watch development? Williams says he wore them briefly. Williams says Apple started project well before the words “Wearables” and “smartwatches” started flowing around. It was a process of learning and observing. It’s been really exciting.

– Walt: What does running operations means? Williams: Almost 3000 engineers, supply chain, figuring out how to do the things we do, as we’re usually pushing the envelope on cutting age technologies, all the service and support. Later this year, we’ll have 45,000 people answering the phone to give AppleCare support during the holiday season. If you stacked all sold iPhone 6s during the last holiday quarter, it would be higher than the orbiting international space station.

– Walt asking about suppliers in China. Williams: Proud of work being done there, we pay more than the average rates in the area, people are getting paid more. When suicides news broke years ago, Williams and Tim Cook visited China personally to investigate the situation. We’ve investigated each and every suicide, and they were not related to working conditions.

Walt: You’re running operations, you run the Apple Watch’s development, what else do you do? ResearchKit? Can you talk about that, how it’s going. Williams: So in March we announced ResearchKit, a software framework to use the phone as a research tool. We announced 5 apps that would initially go after 5 diseases. There are more coming, and we’ve learned some amazing things. With the Parkinson’s app, people with the disease signed up and conducted these tests. We believe that some people in the control group who don’t think they have Parkinson’s, actually have it. We’re just beginning.

Walt: Asks about diversity, because of the well known problem of diversity in the technology industry. Williams: We’re doing well, but we can do a lot better. About half of the Operations Vice Presidents are female. Walt: Why is this viewed as a particular problem in the technology business? For some of the categories you’ve mentioned, the feeder system needs to be improved… the sciences and math. Part of it is a focus issue for companies, and we’re focused on it.

Walt: Has the smartphone begun to plateau out? Williams: No way. Will people buy new ones? We’re not tapped out. Walt: Hypothetical example of what a smartphone can do that can make people go out and buy another one? Williams: Hypothetical, if it can scan your body and do a full tricorder, I think people would buy it.

Walt: Can you fix that thing when people will stand at the same time? Williams: We love it, it’s really nice, you get the little You Did It, to make you feel good.

– Question: Do you see the Apple Watch as a trojan horse for medical transparency? Williams: I don’t want to talk specifically where the Watch is going to go, but we have a great interest in helping people. We view the fact that people wear this that we have an opportunity and an obligation, and we’ll be excited about that.

– Question: About revenue growth at Apple, about 65% of revenue comes from the iPhone. My concern is that the Watch won’t be the next $10-$20 billion business. Can you talk about industries that Apple is at least looking at with your giant stack of money? Williams: The car is the ultimate mobile device. We look at many categories, we’re exploring a lot of interesting areas.

– Question: Responsibility for cutting edge technologies to advance America? Williams: We work with over 8000 suppliers in the United States. We spend billions of dollars here developing technology.

– Question: Asking about vertical integration, do you see more opportunities for vertical integration to improve competitive advantage? Williams: I think we’re incredibly vertically integrated, we continue to acquire companies frequently. We design every piece of what we do, even something that seems like a standard part. The screen for the Watch is something that our engineers working on closely, we write our own software. It’s absolutely part of our strategy.