Review: myCharge’s HubUltra is the premium 12,000mAh battery for your iPad + Beats headphones 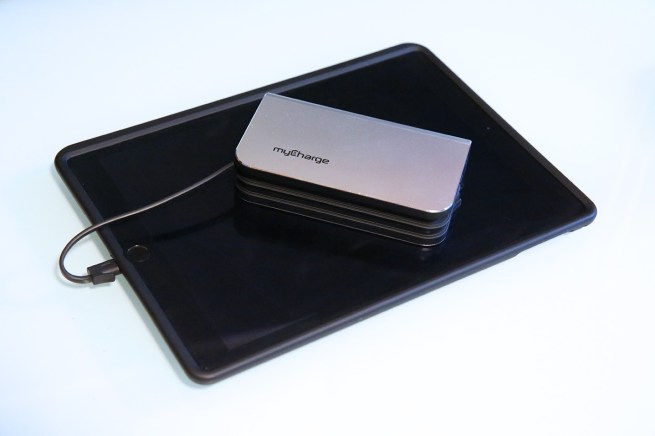 I’ve learned a lot about 9to5Mac readers’ iPad, iPhone, and even MacBook battery preferences over the past six months: roughly 75% want the most affordable or value-laden battery available for a specific need (say, a powerful $40 iPhone 6 battery case or an $80 ultra high-capacity iPad battery), while the remaining 25% are willing to pay a premium for better features or a better-known brand name.

Just beginning to hit stores, myCharge’s new HubUltra ($150, currently $110 online) is designed to be the iPad/iPhone battery for users who will pay more for something flashy. It looks great, packs a large 12,000mAh rechargeable cell for plenty of power, has built-in Lightning and Micro-USB cables, and rapidly refuels with an included wall power dock. HubUltra doesn’t deliver as much power for the dollar as the remarkable Anker Astro E7, but myCharge has built a completely turnkey solution that will particularly appeal to iPad users with micro-USB accessories. If that’s what you’re looking for, read on… 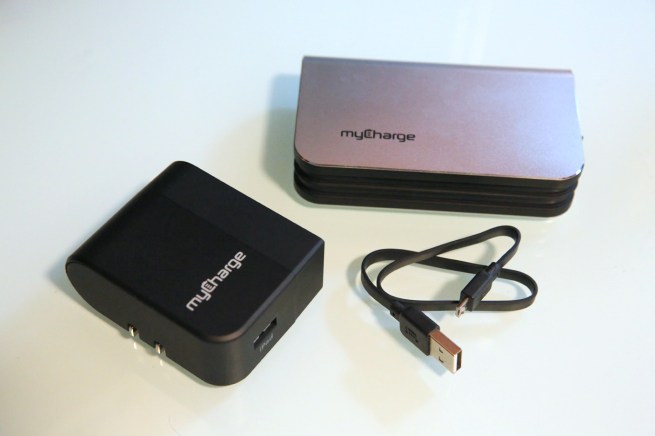 While most Apple batteries have shifted to inexpensive, all-plastic enclosures, HubUltra goes in the opposite direction. It’s made from silver anodized aluminum, complete with glossy beveled edges that match the fronts of current iPads and iPod touches. Measuring roughly 4.5″ by 2.7″ by 1″ with curved corners, HubUltra has a more compact footprint than its rivals, but it’s thicker, a dense-feeling, professional-looking design. myCharge uses a black plastic core to manage two 5.5″-long, non-detachable Lightning and micro-USB cables, which are easy to pull out and put back in as needed. 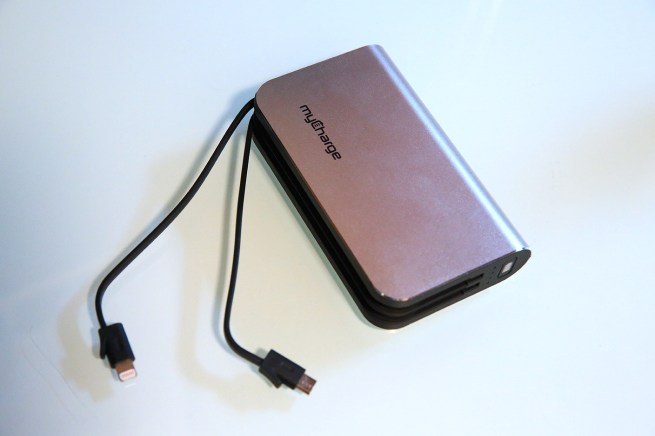 myCharge includes two different ways to refill HubUltra’s 12,000mAh battery. Like virtually every other company, it provides a micro-USB recharging cable in its box, so you can connect that to a port on HubUltra’s bottom for comparatively slow recharging with any computer. But it also includes a custom 4-Amp black plastic wall adapter dock with fold-out wall power blades on the back, three charging pins on the top, and a full-sized USB port labeled iPad on the side. 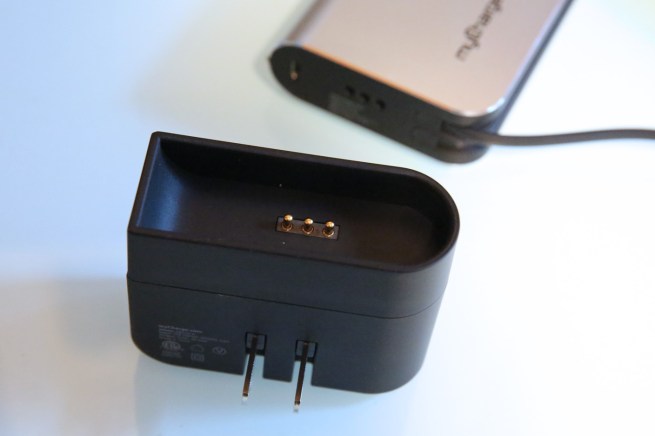 This dock is a travel-friendly 2.25″ by 3″ by 1.2″ in size, enabling HubUltra to dodge an issue faced by most other high-capacity batteries: it can be recharged from 0% to 100% in a very reasonable four hours. And when it’s not recharging HubUltra, the charger’s USB port can be used to provide up to 2.4-Amp power for an iPad, iPhone, or iPod if you self-supply a separate cable. It’s a very nice pack-in, and easy to use: just pop HubUltra on top of the dock, and plug the dock into the wall. 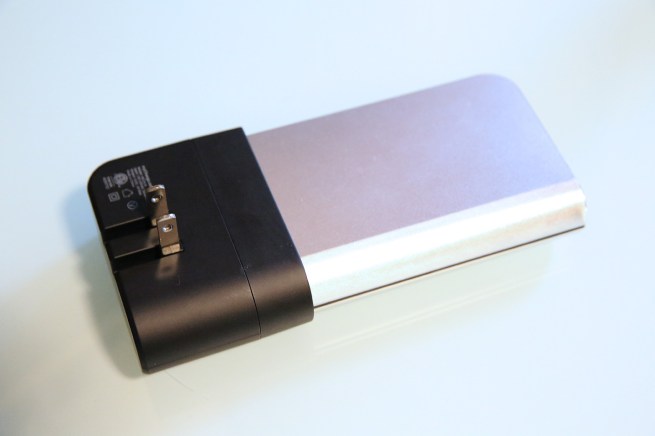 HubUltra’s lights and buttons are straightforward — not the best around, but a step better than the ones I’ve seen on some budget-priced batteries. Four bright white lights indicate remaining power if you tap the combination power indicator and power on/off button, which also starts the flow of energy to your connected devices after a brief press. myCharge notes that HubUltra can retain up to 60% of a full charge when left unused for a year, and has a collection of other under-the-hood power efficiency features; my “pre-charged” review unit arrived with three of the four lights filled. 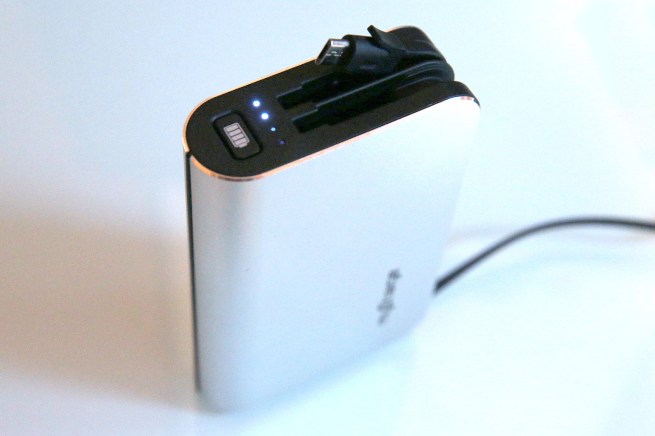 Whether HubUltra will meet your battery needs is going to depend on the gear you hope to use with it. If this battery has any obvious weakness for pure Apple users, it’s that the two cables use different connectors: HubUltra offers 3.4-Amp total output across the two cables, such as 1-Amp iPhone or 2.4-Amp iPad support, but you can’t connect both an iPhone and an iPad at the same time without an Apple Micro-USB to Lightning Adapter or equivalent third-party version). There’s no spare USB output port on HubUltra to let you use a regular Lightning cable instead. So HubUltra’s ideal customer is an iPad user with a micro-USB accessory such as a pair of rechargeable battery-powered Beats headphones, or iPhone/iPad/iPod users who don’t mind swapping their devices on the Lightning plug for charges. 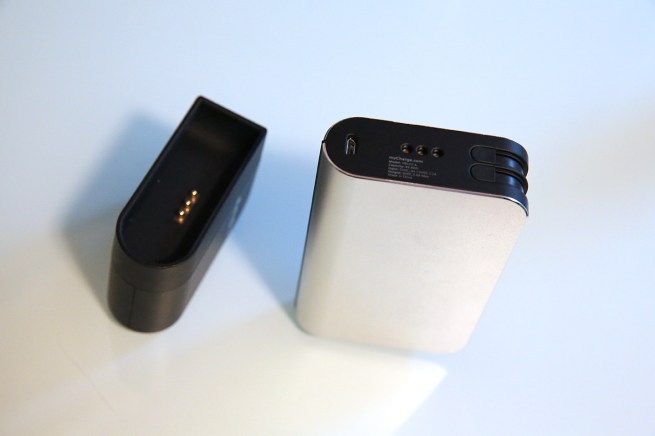 In my testing, the 12,000mAh battery performed as expected, delivering a 116% charge to an iPad Air 2 — one full recharge from dead to 100%, then an extra 16% after a partial discharge. It was also fast, reaching 71% after two hours, and 100% after 3 hours and 25 minutes. Apart from its speedy wall recharging capabilities, a non-trivial benefit, HubUltra was otherwise comparable in basic performance to the 12,000mAh Aukey PB-N28 I tested last month. You can expect either one to fully recharge any current iPad model (from iPad Air 1 to iPad mini 3) at least once, and any iPhone three or more times. 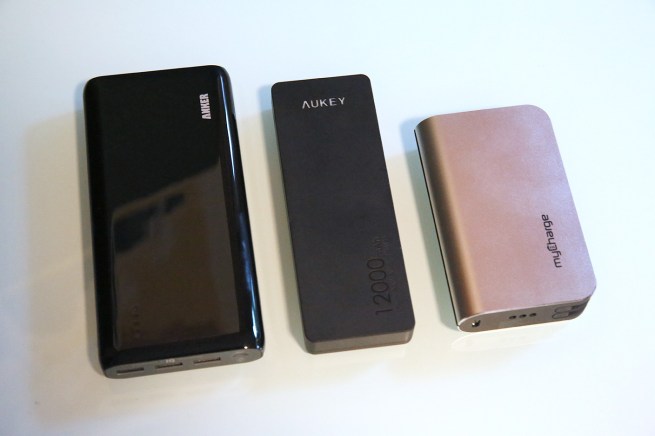 The challenge for myCharge, of course, is competition: Aukey’s 12,000 PB-N28 sells for $25, and Anker’s 25,600mAh Astro E7 goes for $80. Both deliver a lot more bang for the buck than HubUltra, and though each requires you to self-supply Lightning cables and a wall adapter, they’ll actually let you charge two (or with Astro E7, three) Apple devices at once. That’s why I’d describe HubUltra a a premium solution for a very specific type of Apple user. If you value myCharge’s fast packed-in wall charger, nicer metal cladding, and integrated cables enough to pay the premium, you’ll be pleased by its build quality and performance. But there’s good reason the battery market has moved to more affordable, device-agnostic options: they tend to be more universally appealing, even if they don’t include all the frills HubUltra offers.