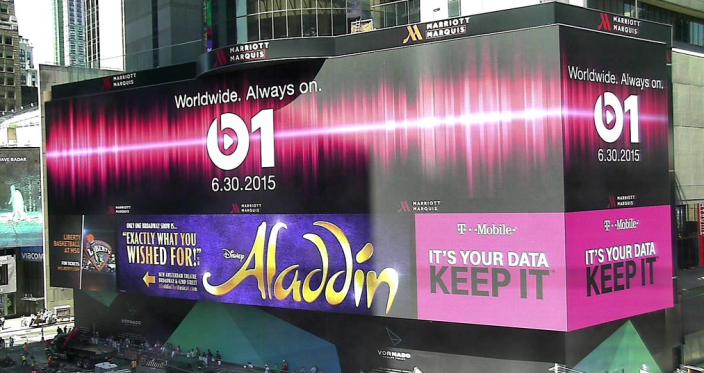 Ahead of its launch next week, Apple today has launched a new ad for Beats 1 in Times Square in New York City. Zane Lowe, who will be one of three hosts on Apple’s 24/7 streaming station Beats 1, tweeted the above image of the advertisement.

The promotional image touts that Beats 1 is worldwide and always on, two of the qualities Apple discussed heavily when it unveiled Apple Music at WWDC. What’s weird about the Times Square advertisement, however, is that there is no Apple logo anywhere on the monumental display. There’s only a Beats logo, albeit slightly modified, the “Worldwide. Always on.” tagline, and the June 30th launch date. It’s a risky move by Apple not to put its logo on the advertisement, but doing so definitely causes curiosity from uninformed people who pass by.

Earlier this month, Apple started playing a pre-roll audio clip from Zane Lowe for iOS 8.4 and iOS 9 users who clicked the Beats 1 station in the music app. Apple Music, along with Beats 1, will launch on June 30th for $9.99 individual/$14.99 family per month.