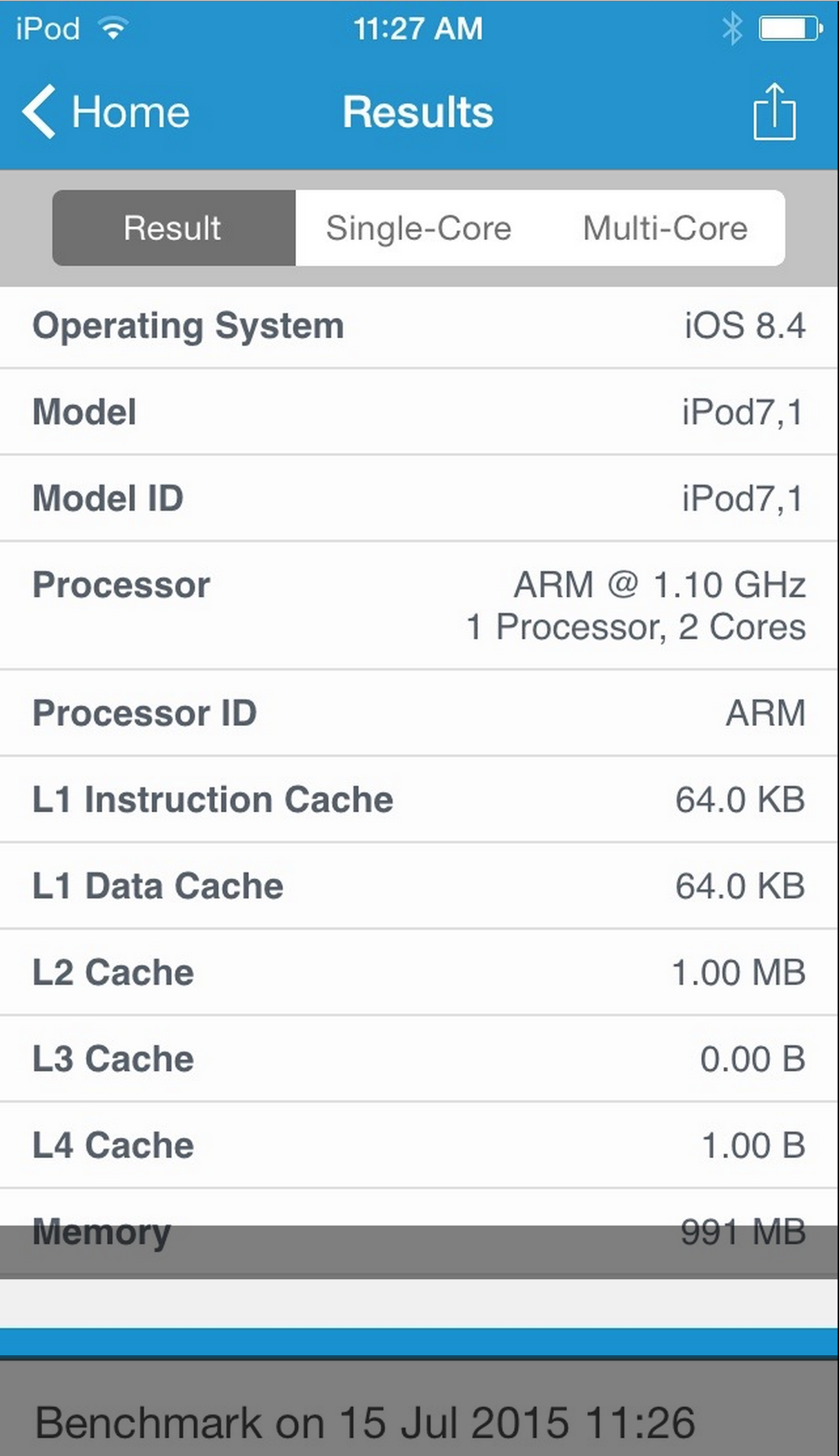 As expected, Apple updated its iPod lineup today and I just wanted to add a few notes on the new hardware.

The iPod shuffle and nano lines got new colors but otherwise are the same internally with the 2GB and 16GB storage inside and same skeuomorphic UI for the nano. To me this is Apple saying the long goodbye to these products the same way the iPod classic was ushered out. Expect these to last as long as whatever inventory Apple decides to build.

The new iPod touch is much more interesting. It got the same new color palette and otherwise is the same externally – except losing the unpopular Loop strap. However, internally it gets supercharged with the same A8 processor as the current iPhone 6 and 6 Plus but running about 15% slower, the M ‘motion’ coprocessor, Bluetooth 4.1 – an Apple first and 1GB of RAM. Techcrunch was the first to run some benchmarks on a review unit:

We’ve got some of the new iPods here to play with and we ran an initial benchmark on the iPod touch. The processor appears to be running at 1.10GHz per core, vs the iPhone 6’s A8 processor, which clocks in at 1.39GHz. The Geekbench scores clock in at 1379 and 2440 right out of the box with as much idle state as I could manage. This means that the iPod touch A8 processor is under-clocked slightly from the iPhone 6, which is not surprising given the battery constraints I mentioned above. It also appears to have 1GB of RAM.

Starting at $199, the iPod touch costs less than the margins Apple makes on even its cheapest iPhones. Almost every human has or will have a phone and Apple surely wants everyone who buys a phone to buy an iPhone. But there are some important features to consider here:

The underclocking and 1GB of RAM is almost certainly due to the smaller battery and reduced screen size and information load of the cellular-less Touch. The 7.1 model number indicates that that there might have been a 6.1 iPod touch that never got released between now and the previous 5.1 model. Purely speculating, perhaps there wasn’t enough of a difference in that model to warrant a redesign. Or perhaps the market wasn’t demanding a new model.

@stroughtonsmith may be more that it is now in line with iPhone 7,1…?…

More importantly, what does the new Bluetooth 4.1 buy you?

Coexistence — engineered to work seamlessly and cooperatively with the latest generation cellular technologies like LTE. Bluetooth and LTE radios can communicate in order to ensure transmissions are coordinated and therefore reduce the possibility of near-band interference. The coordination between the two technologies happens automatically, while the consumer experiences the high quality they expect.

Better Connections — provides manufacturers with more control over creating and maintaining Bluetooth connections by making the reconnection time interval flexible and variable. This improves the consumer experience by allowing devices to reconnect automatically when they are in proximity of one another. The consumer can leave the room and upon returning, two recently used devices reconnect without user intervention.

Coexistence with LTE isn’t a concern with the WiFi-only iPod touch, but it will be important for when 4.1 hits iPhones and iPads later this year. Data transfer and better connections are obviously important for all of Apple’s devices. But there is more to Bluetooth 4.1:

Enabling the Internet of Things

By adding a standard means to create a dedicated channel, which could be used for IPv6 communications in the Core Specification, the groundwork is laid for future protocols providing IP connectivity. With the rapid market adoption of Bluetooth Smart and the coming addition of IP connectivity, all signs point to Bluetooth as a fundamental wireless link in the Internet of Things. These updates make it possible for Bluetooth Smart sensors to also use IPv6, giving developers and OEMs the flexibility they need to ensure connectivity and compatibility.

This means that the iPod touch, for instance, could be a hub for Sonos-like speaker array or multiple different devices in use at the same time. Use of the iPod touch as a hub for Internet of Things makers hasn’t yet taken off, but at $199 and dropping, perhaps that’s a new direction for the iPod touch to travel.

Is this the end of the line for the iPod?

There are a few grandparents and most kids out there who don’t have a phone (and its included carrier bill), however, and Apple still needs to serve this audience. The kids audience will remain without phones for the foreseeable future, but I imagine that many get their parents’ old iPhones or are content with an iPad mini. There are also development needs and other use cases for which a separate iPod touch still makes sense.

An interesting rumor popped up this morning saying the iPad mini was ending its run after this holiday season’s upgrade. Perhaps in 2017 or 2018, Apple will converge the 4-inch iPod and 7.9-inch iPad into one product aimed directly at kids and education.

Today’s update shows that Apple is clearly still in the iPod touch game. There was some time invested in this product unlike the nano and shuffle. I imagine those products will die completely when the Apple Watch 1st generations begin selling for $100 in a few years. But clearly the iPod touch line still has some time left after seeing today’s significant upgrade.