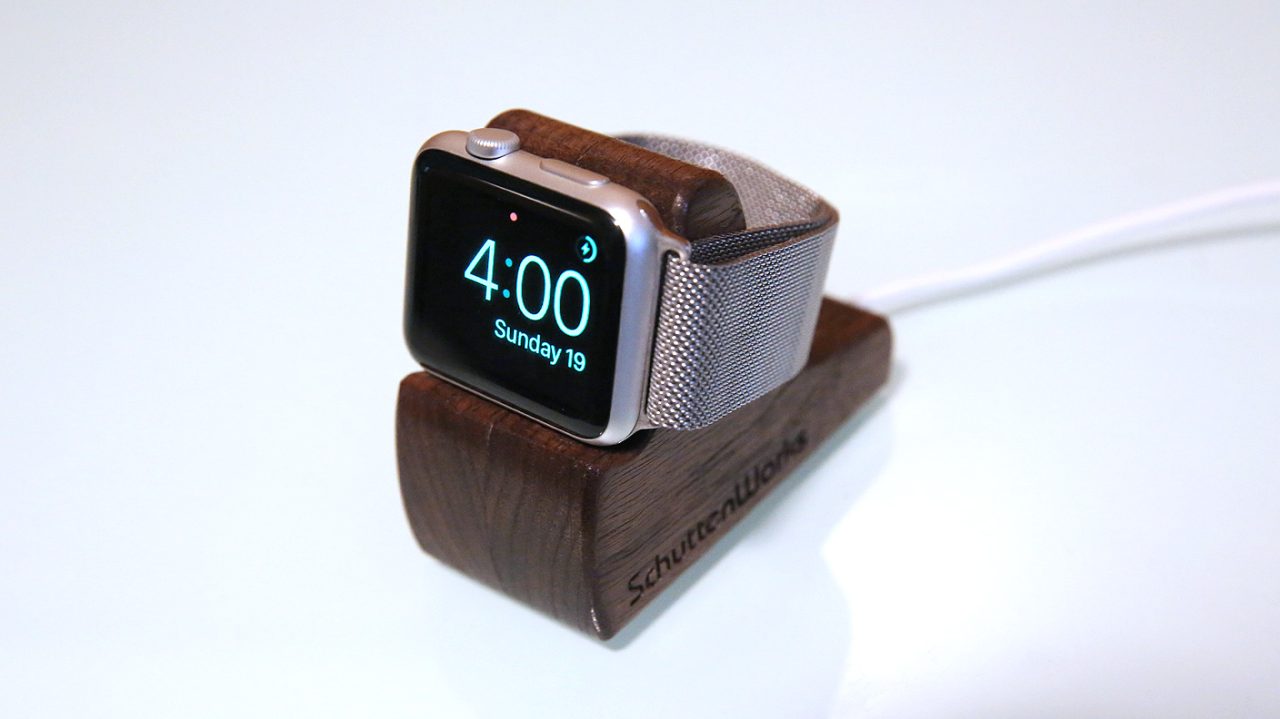 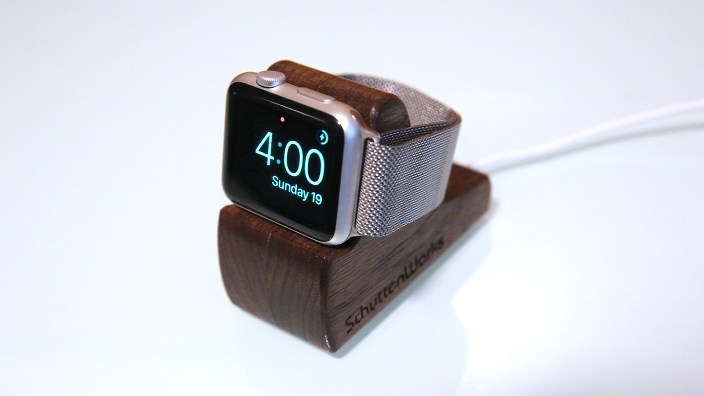 Apple’s June announcement of watchOS 2.0 created a new challenge for top Apple Watch stand and dock makers: an upcoming software feature called Nightstand Mode turns the Watch into a small-screened alarm clock when it’s taken off for charging, but only if the Watch is laying on its long edge. If the Watch is in any other position, Nightstand Mode won’t work, a limitation that many people won’t care about, but some people might accessorize to accommodate.

Like most other Apple Watch stand makers, Portland-based SchuttenWorks designed its earlier Wave Apple Watch Charging Stand before anyone had heard about Nightstand Mode, and Wave’s mounting position doesn’t support the new software feature. So SchuttenWorks has developed a smaller and more affordable option called Ripple ($50) that’s built specifically for Nightstand Mode (and any future watchOS features that may require the same charging orientation). Offered in mahogany, walnut, and cherry, it preserves Wave’s genuine wood construction and novel magnetic assembly, but requires a little less space and lets you see the Apple Watch’s screen… 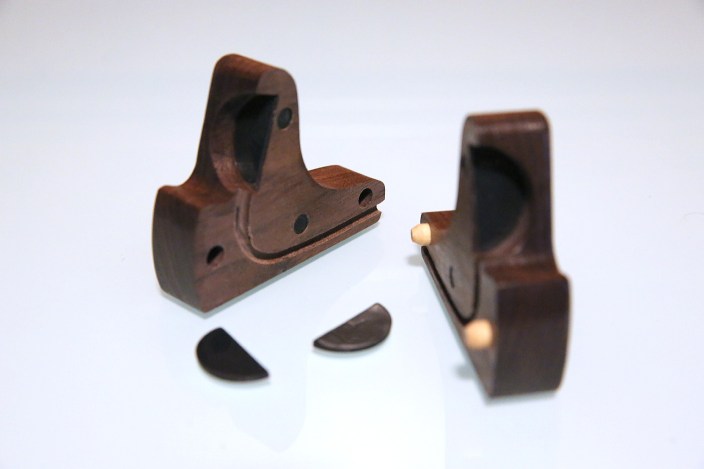 Although their shapes differ, Ripple’s basic design is very similar to Wave’s: you get a two-piece wooden stand that uses a central cable channel, magnets, and wood pegs to securely hold a self-supplied Apple Watch Magnetic Charging Cable inside. At 3″ deep by 2.4″ tall by 1.5″ wide at its largest points, it’s easier to toss in a bag than Wave, assuming you’re not worried about damaging the wood. Unlike Wave, SchuttenWorks has created two versions of Ripple — one made solely for the slightly thinner metal version of the Magnetic Charging Cable, and one that works with the Apple Watch Sport’s thicker plastic Magnetic Charging Cable by default, but can be resized with included pads to hold the thinner metal puck. I tested the latter version, which works exactly as expected with both cables. 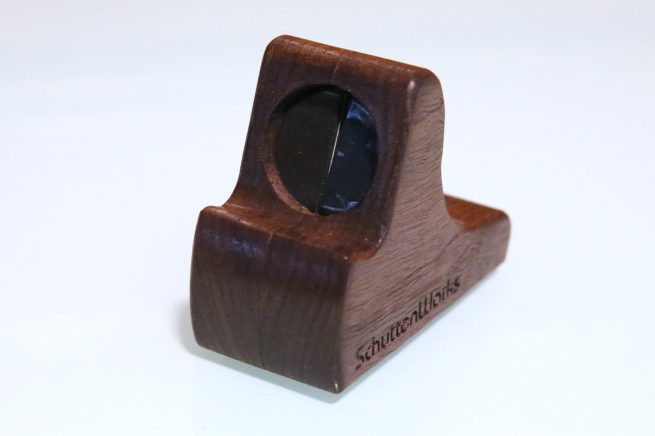 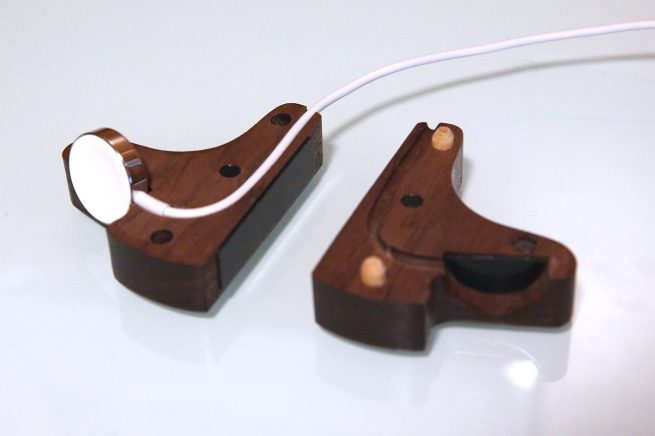 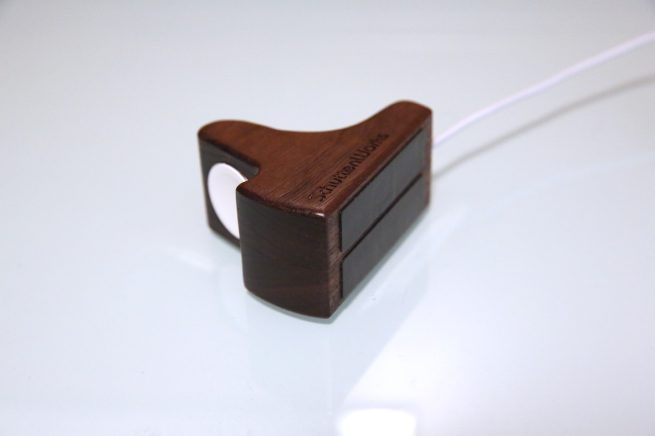 Assembly is nearly effortless. Ripple splits into two pieces, at which point you insert the Charging Cable to match charging puck and wire grooves, as well as the adhesive pads for the charging puck if necessary. After aligning the left and right sides with the wooden pegs, internal magnets lock the sides together, securing the cable and puck in the correct positions, while the USB plug runs out of the cable’s back. At that point, you plug the cable into a wall adapter, and if you place an Apple Watch with watchOS 2.0 on the stand, Nightstand Mode comes up just as expected.

Like Wave, Ripple’s materials are high-quality — this is genuine wood through and through, not particle board or veneered plastic — and the semi-gloss finish looks furniture-quality. Microsuction pads on the bottom can secure the stand in a fixed place, or their plastic coatings can be left on to permit the stand to be moved around. The only arguably missing padding is in the lip immediately below the Watch’s side: the wood is sculpted with a Watch-shaped scoop, so it’s unlikely to scratch the metal of your Watch, but some users may prefer some added material buffer between the wood and Watch. That said, Ripple provides more support for your Watch than just leaving it on a flat surface with the charging puck attached, elevating it around 1″ in the front and around 0.6″ in the back, reducing the chance of both body and band scuffs in the process. 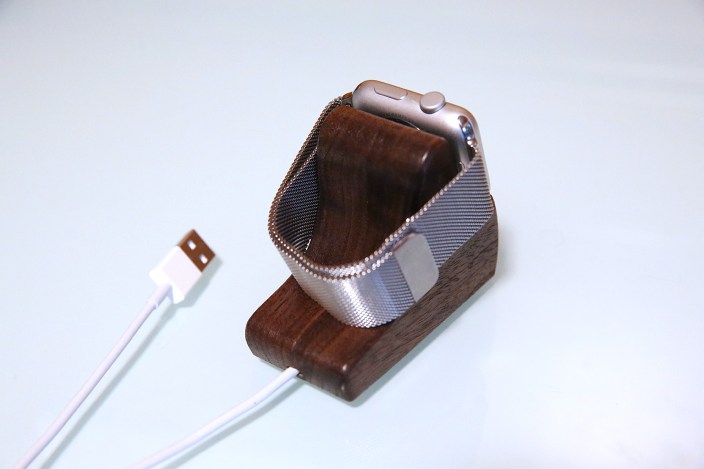 As watchOS 2.0’s official release is still a couple of months away, the jury’s still out on whether Nightstand Mode will be popular with Apple Watch users. The feature isn’t supported by most of the best Apple Watch stands already on the market, and given that Watch screens are small and stay turned off at most times, their use as full-time bedside alarm clocks isn’t totally ideal. But for users who want to use Nightstand Mode and appreciate elegant woodworking, SchuttenWorks’ Ripple is a very nice option. It’s small enough to take on a trip, attractively designed, and more affordable than most of the other wood Apple Watch stands out there today. Consider it if you like what Nightstand Mode promises to bring to your bedside table, or if you just want a solid wood stand at an aggressive price.