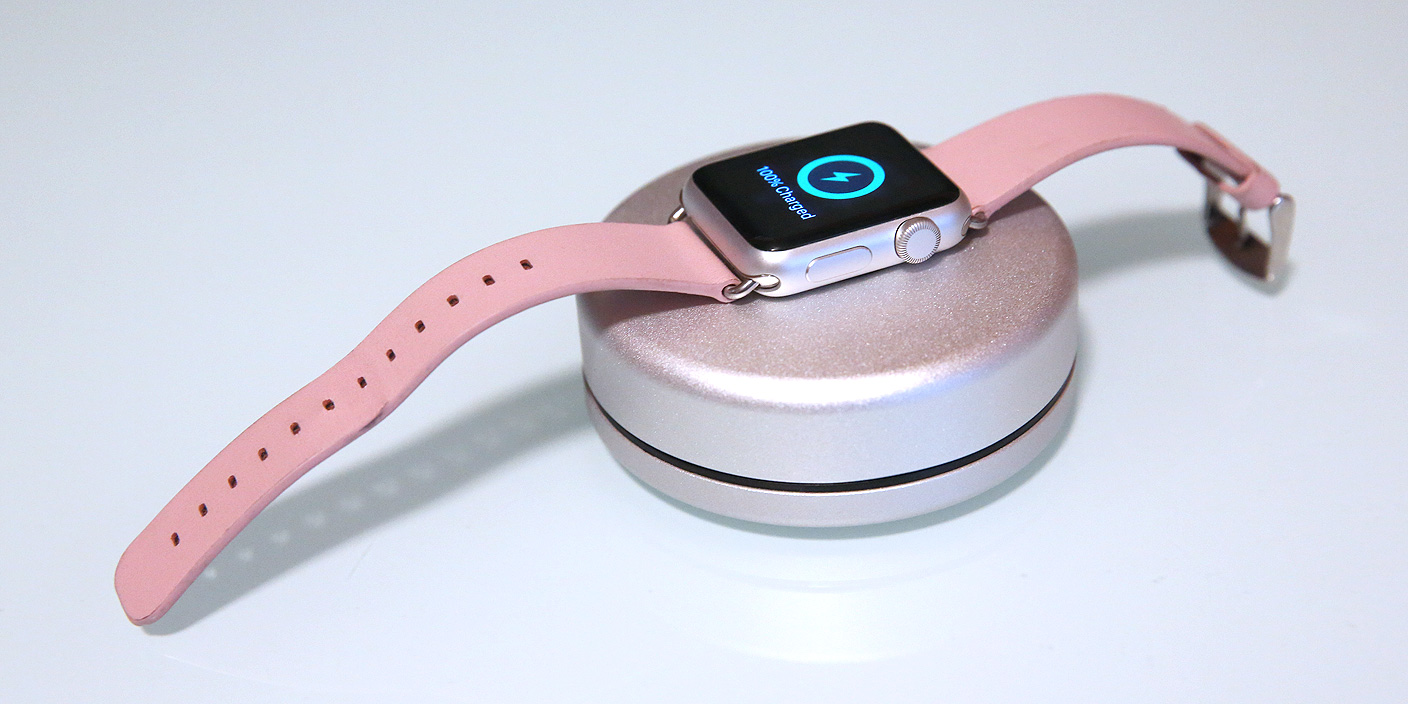 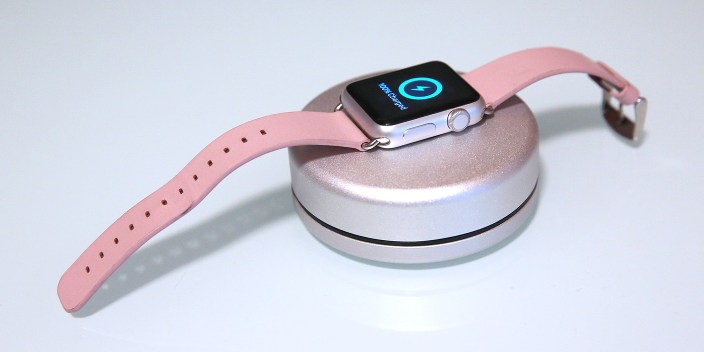 The first round of Apple Watch stands were just that, accessories designed to keep your Apple Watch from rubbing against your nightstand or desk. This month, we officially moved into the second wave — powered Apple Watch docks — with the release of Boostcase’s Bloc and Nomad’s Pod ($60). Boxy, flat, and long, Bloc was a clean design with questionable practicality, but Pod makes a lot more sense: like the Apple Watch Magnetic Charging Cable it holds inside, it’s a partially metal and partially plastic puck you can easily take anywhere and use to charge any Apple Watch. Having previously designed the beautiful Stand for Apple Watch, Nomad promises that the rechargeable 1800mAh battery inside Pod “keeps your watch powered all weekend.”

From my perspective, the Apple Watch’s single biggest issue is its one-day battery life, which has meant risking a dead watch while traveling or otherwise away from a power outlet. Although you could just carry around a device-agnostic USB battery, Pod solves the power problem at a more aggressive price point than Bloc, and in a convenient form factor that will appeal to a lot of people. You can choose from a silver and black version, as shown in the photos here, or a space gray and black version made to match darker Apple Watches. Read on for the details… 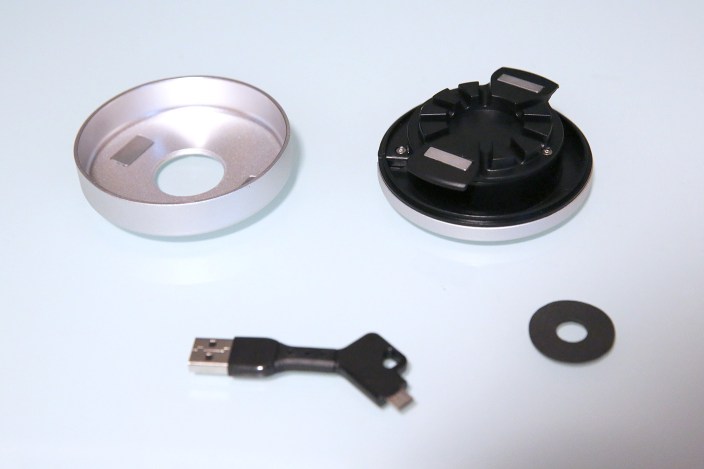 Roughly one inch thick when fully assembled, Pod arrives in four pieces: a base, a lid, an insert, and a cable. The base is the most substantial component, a 3.1″-diameter circle of aluminum with a rubber bottom pad, a hard black plastic top core, and a 1800mAh battery inside. If you’re using Apple’s thinner (non-Sport) Apple Watch Magnetic Charging Cable, you add the foam circular insert to the top of the base; otherwise, you leave it off. Even with the insert inside, the charging puck is elevated just enough to make contact with the Apple Watch’s inductive charging surface once the lid is placed atop the base. Pod totally works, but a millimeter or two of extra elevation would have prevented even a slight level of Watch/Pod contact. 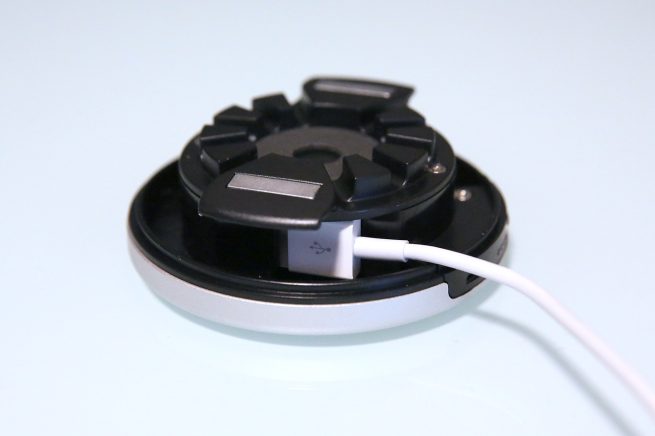 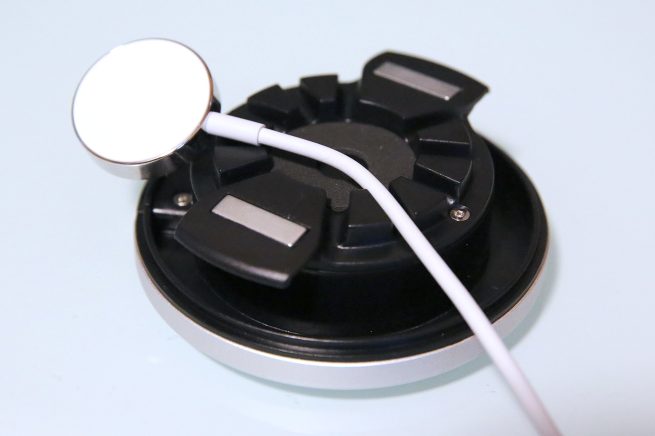 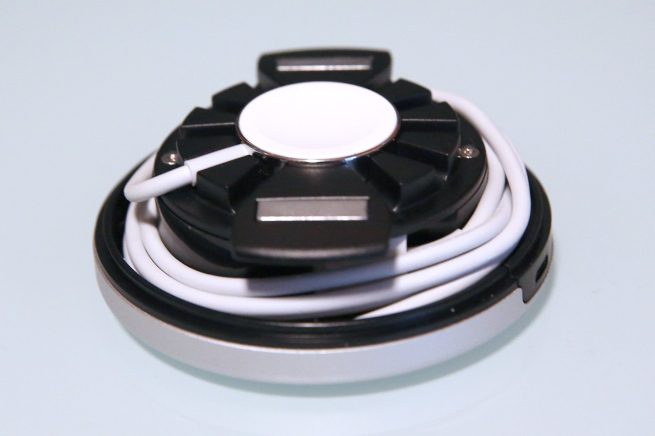 Pod is easy to set up. You connect the Magnetic Charging Cable’s metal plug with its USB icon facing outward to a port in the middle of the base, wind the cable around the central wheel, and place the inductive charging puck in the center. Apple’s 1m and 2m cables are both supported. Unlike Bloc, which was designed with overly tight tolerances, I had no problem whatsoever connecting the USB plug, winding the cable, or securing the puck inside Pod. Once that’s done, you place Pod’s lid atop the base, and two magnets in each part lock onto each other to keep the unit closed. 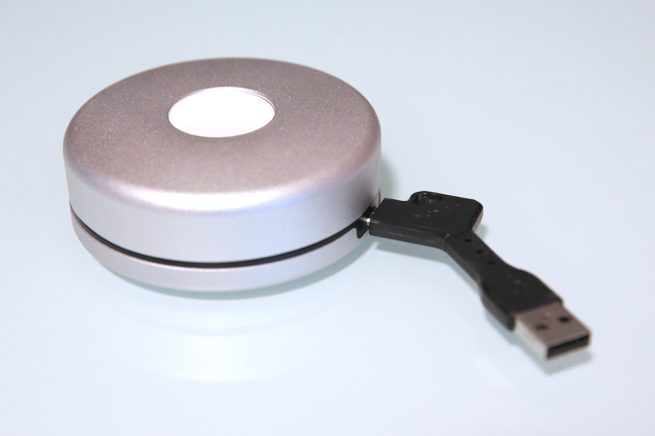 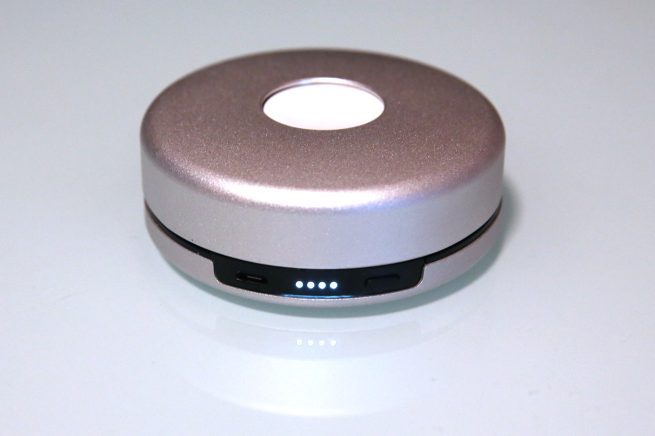 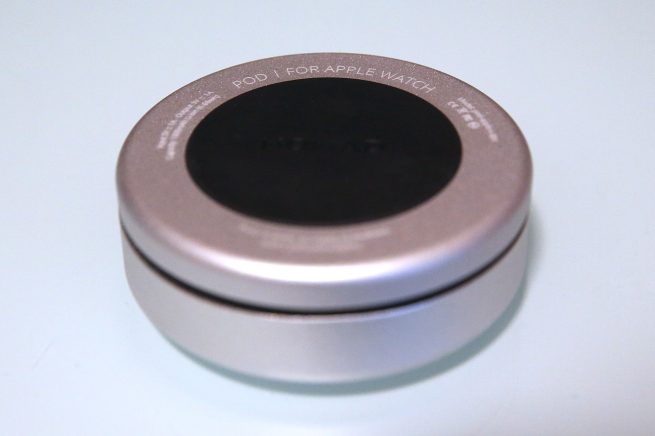 While you can easily remove the cable if necessary, you can treat the assembled Pod as a fully portable one-piece charging station, topping off its internal battery as needed. To that end, Nomad includes a NomadKey micro-USB cable, normally sold for $20. NomadKey is too small to be plugged into the backs of iMacs or Mac minis, but fine for MacBook Air and MacBook Pro connections. Pressing a small button on the edge next to the micro-USB port activates four small white power LEDs, which glow briefly to indicate the remaining charge level, staying on when the Watch or the Pod are charging.

Should you want to use Pod as a wall- or computer-powered dock, you’ll probably need to self-supply a longer micro-USB cable to connect with the Apple Watch’s packed-in wall adapter or another power source. During most of my tests, Pod worked without complaint as a pass-through dock. But I noticed on one occasion that it wasn’t passing my iMac’s USB power through to the connected Apple Watch. To avoid this issue, you need to be sure you’ve pressed the edge button to turn Pod on — if you do this, you can feel confident that your Watch is charging. 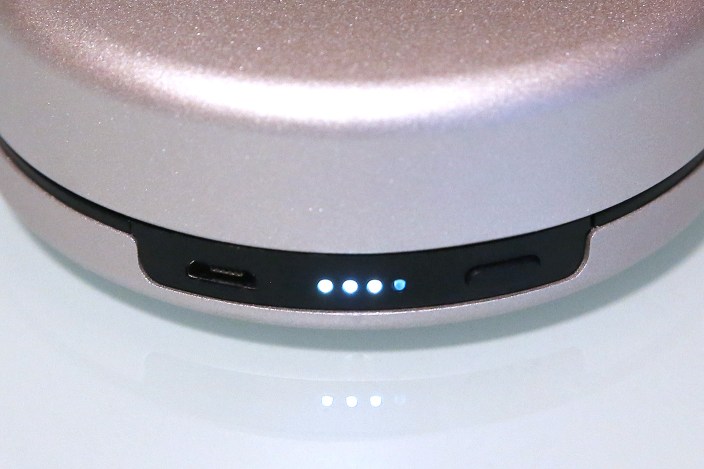 Pod’s battery performance is solid rather than mindblowing. Nomad originally said that the 1800mAh battery inside Pod would deliver four full charges to an Apple Watch, but later quietly walked back that claim to the aforementioned “powered all weekend” level. In my testing, Pod delivered around 287% additional power to the 246mAh battery inside the 42mm Apple Watch, which is to say two complete recharges and then 87% more before expiring; the smaller 205mAh battery inside the 38mm Watch should easily hit three full recharges. This isn’t a complete surprise because Bloc’s 2000mAh battery just barely went over the three charge mark, but it’s short of Nomad’s original “four” number, for whatever that’s worth. 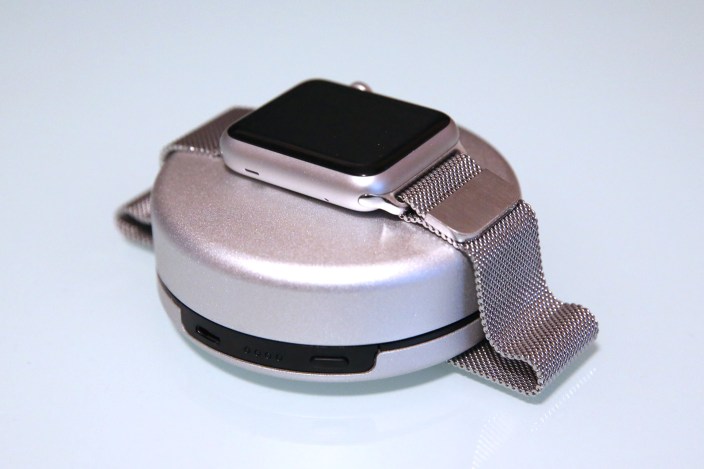 If there’s one obvious issue with Pod, it’s that the design is really meant for open-banded Apple Watches; you can use it with Apple’s Milanese Loop or other closed bands, but they’ll wrap under the rubber-padded bottom, potentially scuffing against your nightstand or desk. Including a soft carrying bag would have at least reduced this problem. But apart from that, I really like what Nomad has done with this accessory: it’s relatively small, capable of keeping an Apple Watch running for around four days (including its initial charge), and markedly less expensive than Bloc. While device-agnostic USB batteries are viable alternatives, Pod’s clean cable management, size, and design are all well-suited to Apple’s latest device. Give Pod serious consideration if you’re looking for an all-in-one solution to your Apple Watch’s on-the-road power needs.