Kantar: The iPhone’s Q2 market share grew in every country surveyed…except the U.S.

Kantar data suggests that the iPhone increased its market share during Q2 in all of the countries it surveyed bar the USA. Apple’s share of the smartphone market grew in China, Australia and all five of Europe’s largest markets, defying the usual lull in sales seen during the run-up to a new model in September.

Kantar surveyed buyers to determine the reasons they selected the iPhone over Android rivals, with owners listing four main factors …

Although screen size has grown in importance as a purchase driver since the launch of the iPhone 6 and 6 Plus, iOS buyers are generally driven by a wider list of factors, such as phone reliability and durability, as well as the quality of the materials.

Android buyers, in contrast, named price as one of the biggest factors in their purchase decision, 43% saying that ‘a good deal on the price of the phone’ was the main reason for their choice of smartphone, reports Fortune.

The iPhone did, however, see its usual seasonal fall in market share in the U.S., said Kantar, where its share dropped by 2.3%. 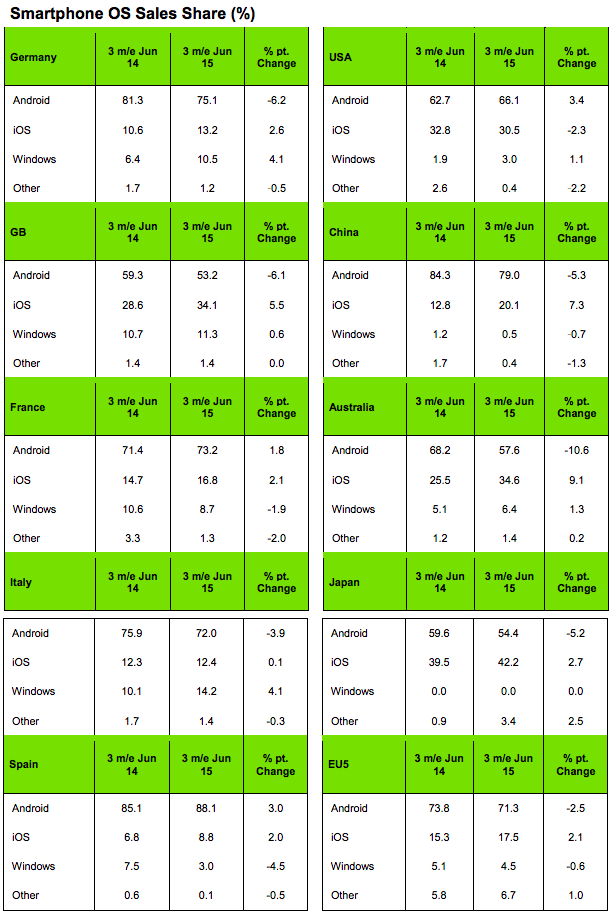 Strategy Analytics recently estimated that the iPhone’s global market share climbed year-on-year from 8.2% to 10.9%, while an earlier report suggested that Apple took home 92% of all profits made in the smartphone industry.