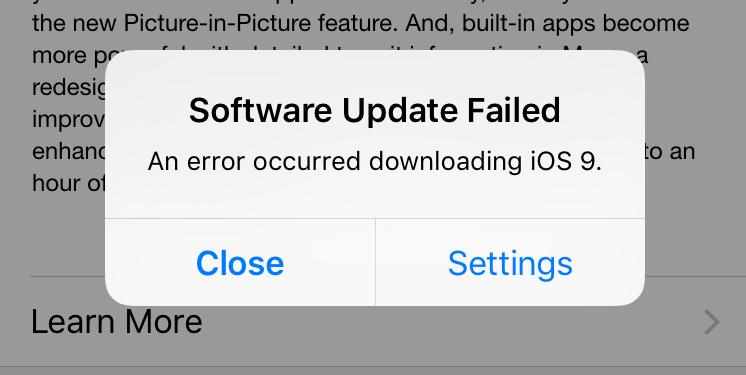 Update: Apple has posted an official workaround for the “Slide to Upgrade” bug…

While Apple has officially released iOS 9 for iPhone, iPad, and iPod touch, several readers are reporting issues with updating to the new operating system. Developers using the iOS 9 GM seed released last week are also able to update to today’s release over-the-air, although the same error message is impacting those users.

Earlier today Apple announced that it was delaying the release of watchOS 2 for Apple Watch, although iOS 9 was not delayed. It’s likely, however, that the current issues with updating over-the-air are related to server load and not pulling the release. Other users are still seeing the previous iOS 8.4.1 version and unable to attempt to update just yet. For my own update to iOS 9 GM to the released version of iOS 9, rebooting my iPhone 6 and checking Software Update in Settings resolved the issue.

As with any major release, the best troubleshooting solution is likely being patient and letting Apple’s servers catch up. In the meantime, some but not all users are reporting some success with updating using iTunes.

We’ll keep an eye on the current updating issues and share the latest with you. If you’re experiencing these issues then you’re not alone, and let us know in the comments how your update process is going.