Apple says response to iPhone 6s has been “incredibly positive”, iOS 9 already on 50% of devices

Apple has confirmed launch details for the iPhone 6s and iPhone 6s Plus — unsurprisingly the new phones go on sale Friday at 8 AM. Apple says that customer response to the iPhone 6s has been “incredibly positive” although the company is yet to release concrete preorder figures.

Apple also announced that iOS 9 has the fastest rate of adoption of any previous iOS release, with  50% of devices already using iOS 9, which was released last Wednesday.

In a press release, Apple SVP Phil Schiller said that the new OS is off to an amazing start:

“Customer response to the iPhone 6s and iPhone 6s Plus has been incredibly positive, we can’t wait to get our most advanced iPhones ever into customers’ hands starting this Friday,” said Philip Schiller, Apple’s senior vice president of Worldwide Marketing. “iOS 9 is also off to an amazing start, on pace to be downloaded by more users than any other software release in Apple’s history.”

Apple’s 50% figure for iOS 9 adoption comes a bit out of left field as third-party analytics trackers are reporting lower figures. Apple’s data comes from analyzing visits to the App Store from iOS devices. According to Mixpanel, which looks at web usage statistics, iOS 9 is currently installed on ~30% of iPhones, iPads and iPod touches in use: 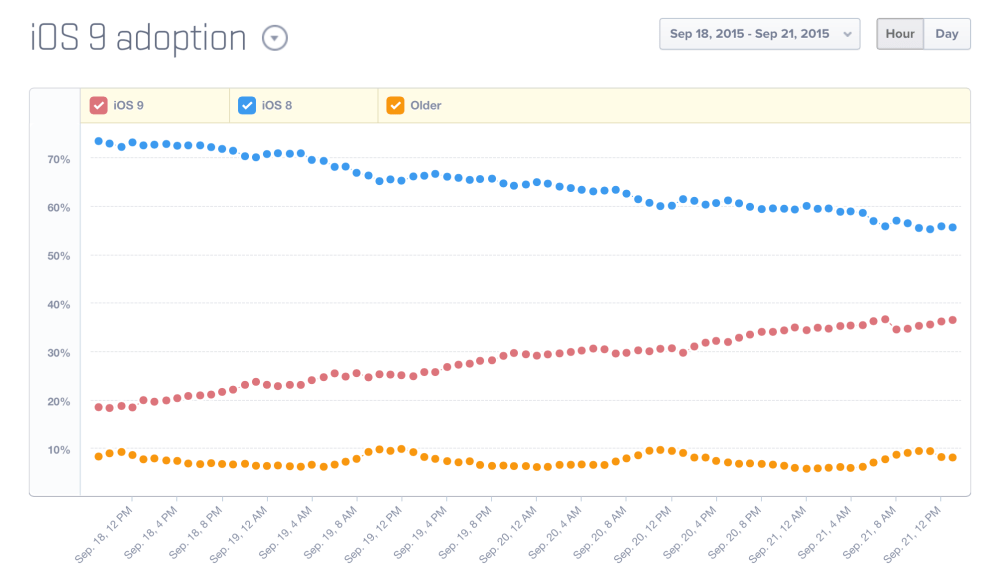 Apple is encouraging walk-in customers to arrive early on Friday to secure a new iPhone. That being said, the iPhone 6s is yet to sell out on Apple’s website so stock availability seems solid. You can read all about Apple’s launch plans for the iPhone 6s in our exclusive report from last week.

It is also worth noting that Apple is yet to release firm sales numbers for the iPhone 6s and iPhone 6s Plus. This year, Apple has only said that it is on pace to beat last year’s record of 10 million phones sold in the opening weekend. This is leading some speculation that sales are not as strong as normal — we’ll know for sure when Apple releases concrete iPhone sales data at its next quarterly earnings call.