Apple first showed off the next-generation software for its smartwatch earlier this year, revealing that it would allow the wearable devices to run native applications directly on the watch, vastly improving performance and allowing apps to interact with the watch hardware in new ways.

Following a significant delay due to a critical bug, watchOS 2 is out now and can be downloaded for all Apple Watches through the companion app on the iPhone. The update seems to have an new build number, indicating that, like iOS 9, it was updated after the GM build was seeded to fix whatever issue held up release.

While a lot of the new watchOS 2.0 update will be familiar, there are some new features throughout the update that will help make your life with the Apple Watch even easier. Check out the video below from 9to5’s Dom Esposito for a rundown of some of the best new additions. 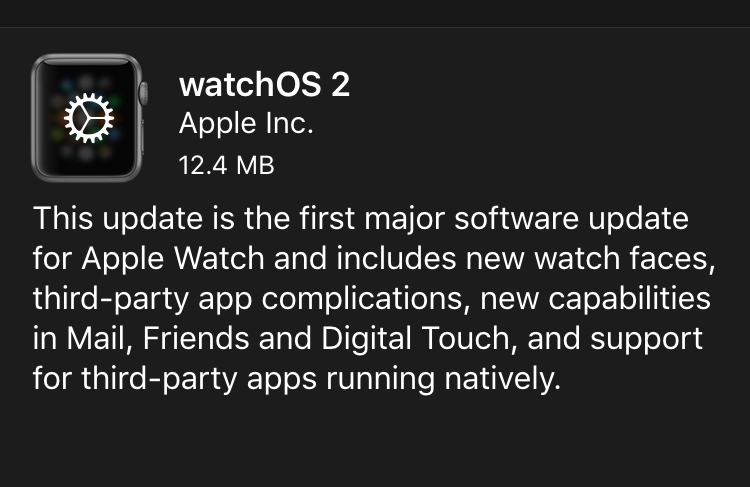 Some of the new features include the ability to set favorite contacts directly from your watch and a new “Time Travel” mode that lets you peek into the future and see what events and changes you’ve got coming up in the next few hours.

watchOS 2 includes several new clock faces to further customize your Apple Watch and make it your own — Timelapse, Photo Album and Photo. There are also some new features for existing watch faces including an assortment of new tint colors.

To install watchOS 2, first update your iPhone to iOS 9, then open the Watch app and check for updates. You should see the new software appear and have the update to upgrade.

The most important parts of watchOS 2 have to come from developers, things like native apps and complications. Native support will make using third-party apps a much nicer experience than they are on watchOS 1 as processing can take place on the watch itself, without needing to communicate to the phone, leading to a faster, more responsive experience. watchOS 2 apps can also expose complications so you can have third-party app data on your watch faces for the first time.