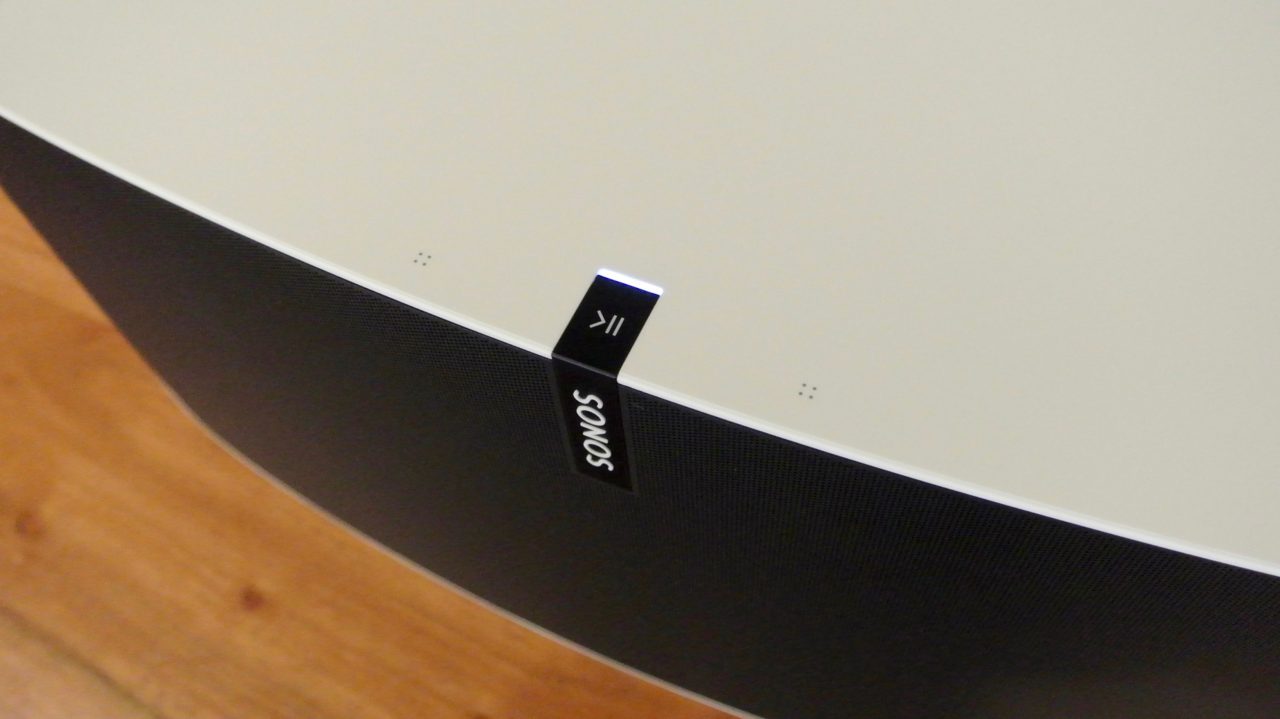 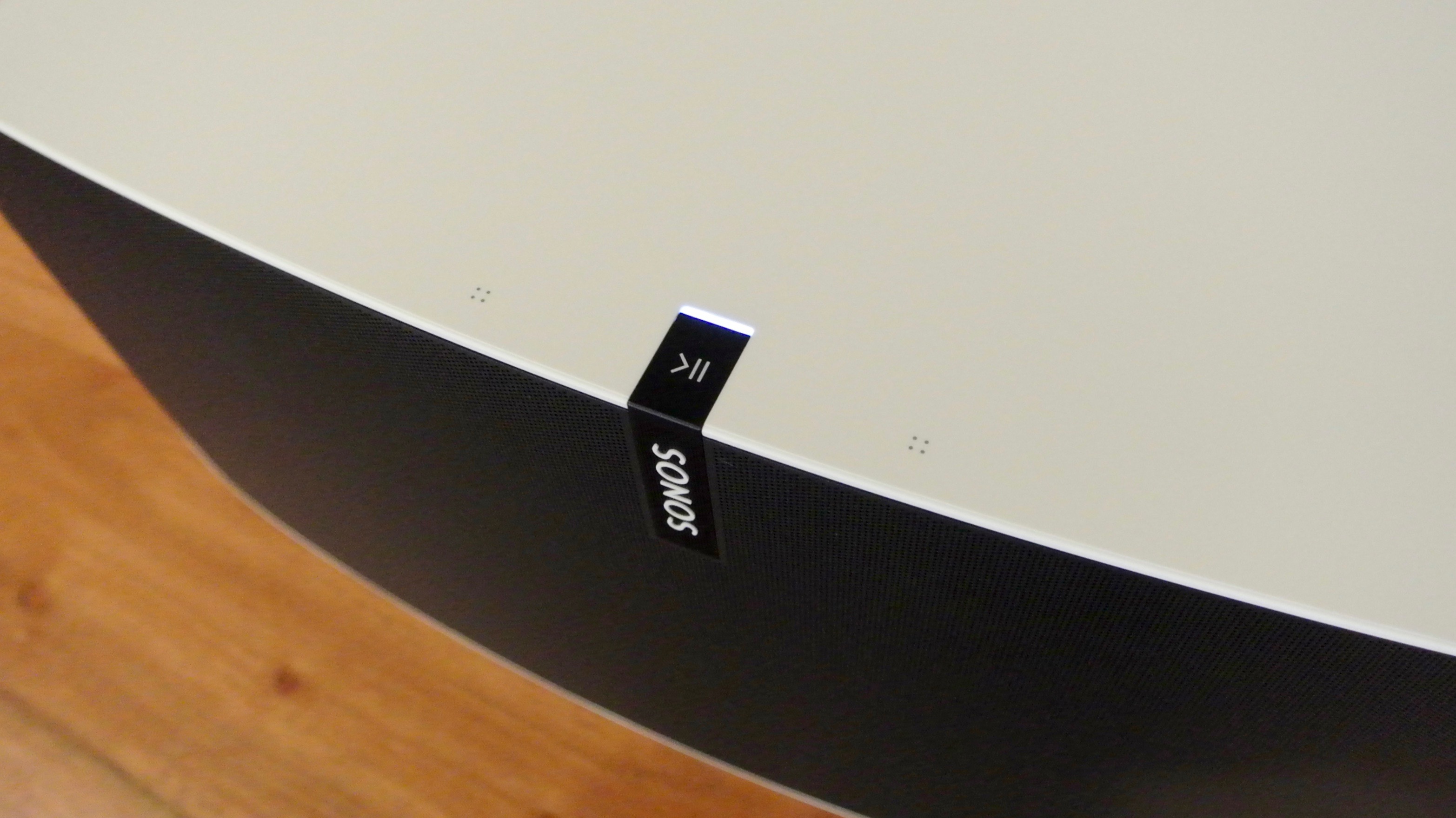 Five years in the making and fifteen months since its last speaker release, all-in-one speaker maker Sonos is ready to unveil its next flagship speaker to the world with the all-new Play:5. If the name sounds familiar, that’s because Play:5 is the same name as the previous flagship home speaker from Sonos before today. With its name unchanged, then what exactly is different with the latest premium connected speaker from Sonos? For starters there’s a streamlined design with a new input method for controlling playback. Sonically, the new Play:5 delivers an array of sound with volume that easily fills a sizable room.

And alongside the new Play:5, Sonos is releasing a new speaker calibration tool called Trueplay. Using the built-in mic on your iPhone or iPad, intelligent algorithms, and a bouncy sci-fi tone, Trueplay enables Sonos speaker owners to enhance their speakers to deliver enhanced sound in the home regardless of speaker placement. Current Sonos customers will be happy to learn that Trueplay isn’t just coming to the latest connected speaker either… 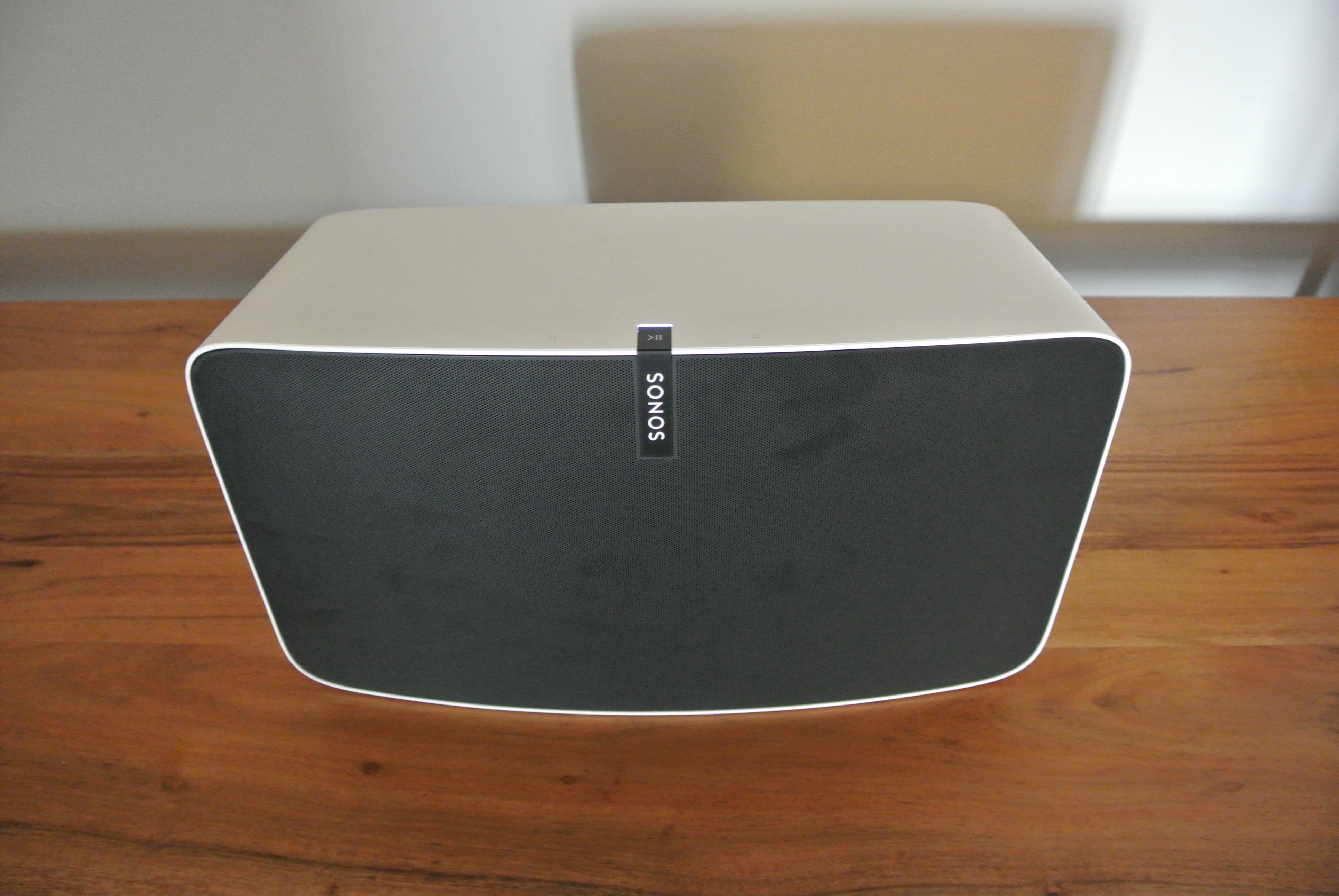 Before we dive into that, let’s take a closer look at the new Play:5 all-in-one wireless HiFi speaker. Available in either all black or white plus black designs, the new Play:5 has been redesigned inside and out from its predecessor. The black version carries the look of your typical home speaker, while the white model looks like what I could imagine a modern day iPod HiFi speaker would. 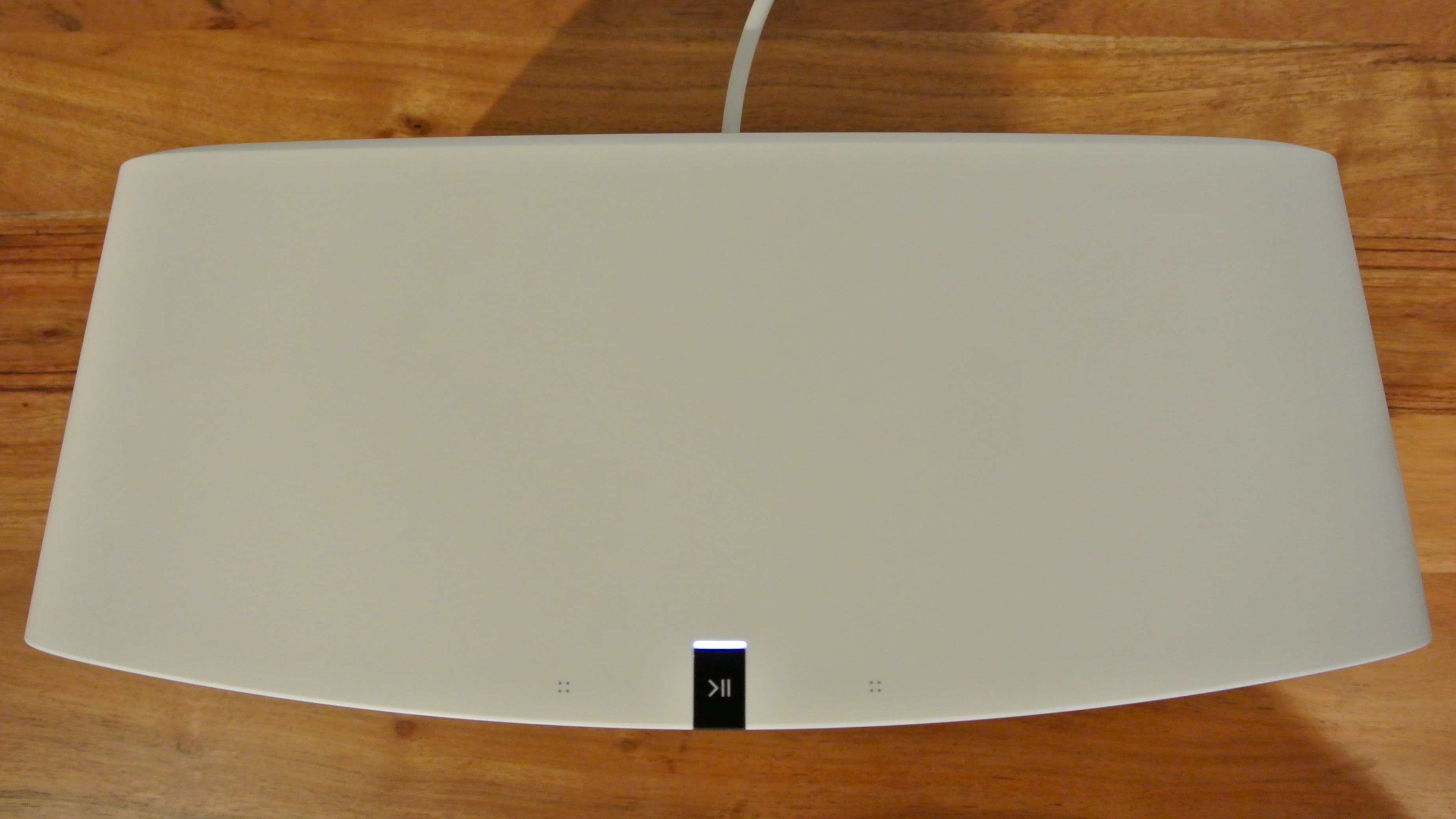 Buttonless touch controls replace the old model’s physical clicky buttons to create a modern and versatile touch pad of sorts for skipping through tracks, playing and pausing music, and controlling volume. Sonos says its aimed to make these new capacitive buttons as much to use as the physical buttons found on the older model, meaning a tap is as quick or faster than a physical click.

In my limited hands-on time with Play:5, I found the new controls to have a slight learning curve at first. After a short period, they begin to feel faster than physical buttons similar to how typing with iPhones feels light speeds ahead of typing on Blackberrys for most people. Because Play:5 is an all-in-one speaker, it’s part-computer on the inside and can cache queued tracks to ensure skipping forward gives immediate feedback even when a physical press isn’t provided. 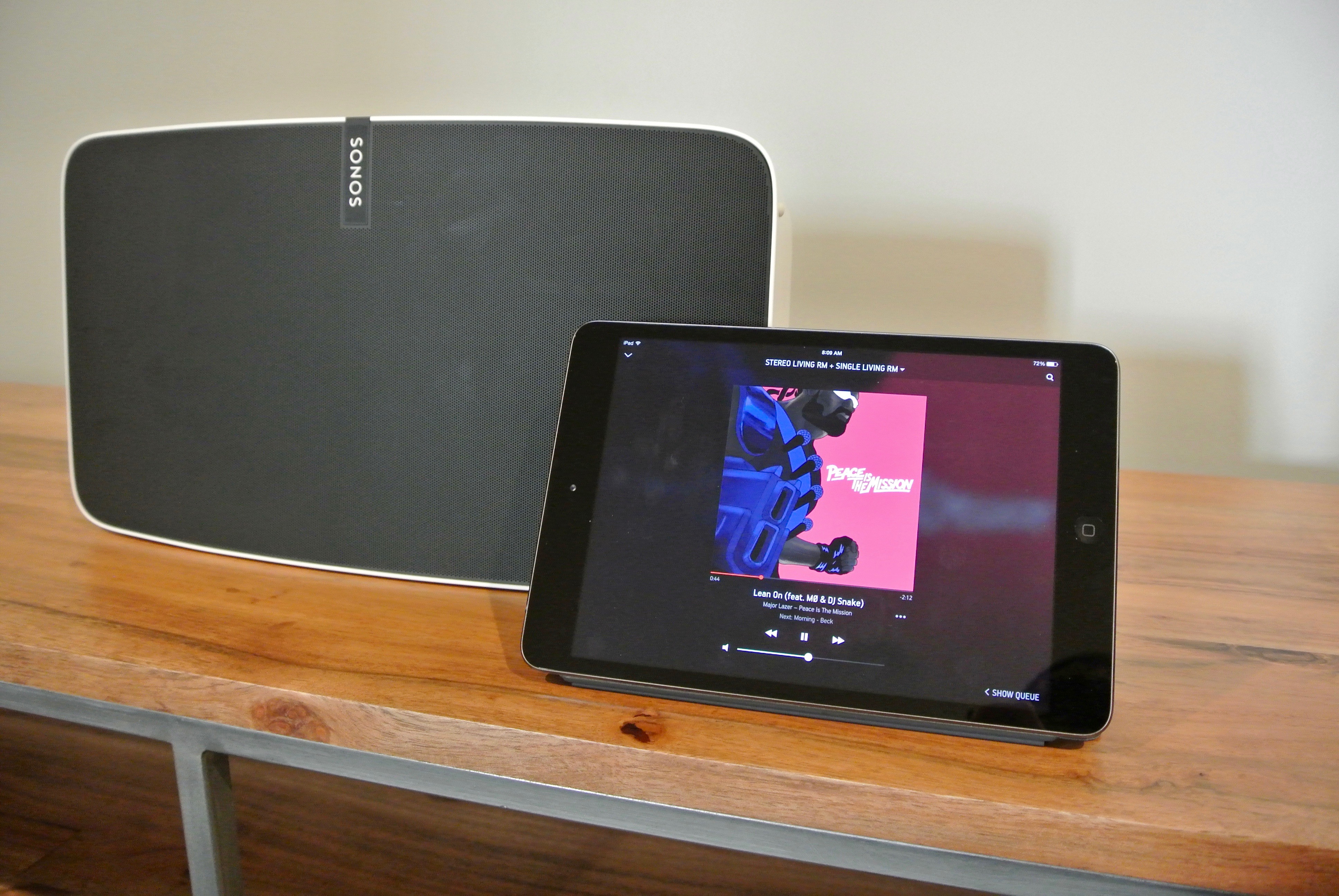 Unchanged from the previous Play:5, audio is streamed in over the Internet through supported services within the Sonos app like Spotify, Tidal, and Beats Music. Apple Music is coming soon but not there yet. You’ll also find podcast playback within services like TuneIn, but no syncing with Apple’s Podcasts or Overcast for now. Play:5 also sticks to no Bluetooth or AirPlay integration, instead relying on a line-in input on the back for playing audio not on the Sonos platform. 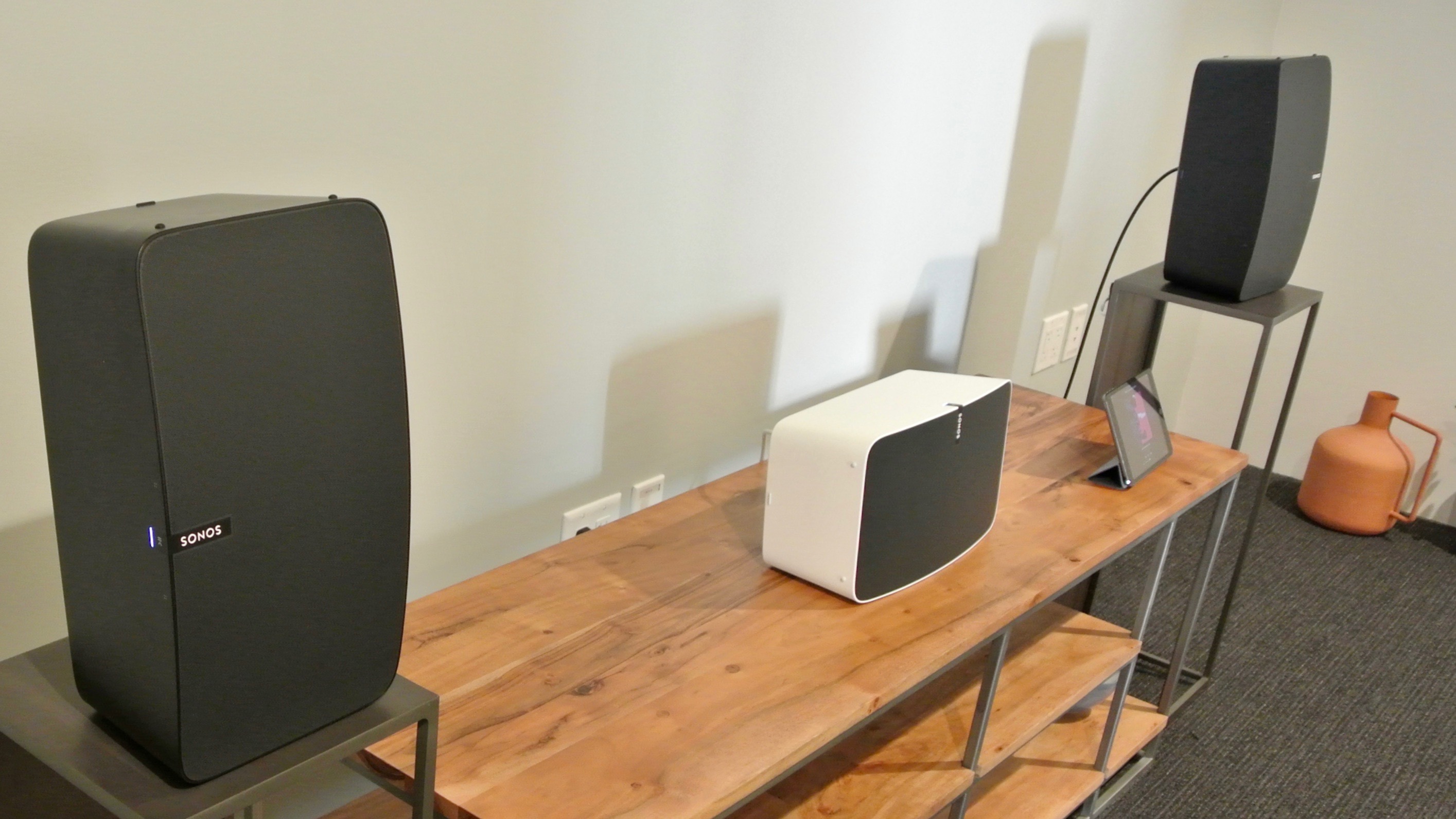 When paired together, two Play:5’s can deliver a slick stereo effect that impresses. Hearing a single Play:5 in a small, theater-style listening room put a single word in my head: loud. When paired with another Play:5, the dancing stereo effect upgraded that single word to an all-caps AWESOME. Play:5 is built to sit on its bottom or on either side when paired in stereo mode. The new touch capacitive buttons adjust to either orientation with the space above the brand tag always for volume up or skip forward thanks to a built-in accelerometer just like our iPhones. The Sonos logo quite cleverly looks correct in both orientations too thanks to the magic of palindromes.

That brand tag is integrated with the grill with holes dotted all over to allow no audio interference during playback. The grill itself is plastic, something Sonos labels AudioFoil, as it allows for better reception to the six antennas than metal grills and is said to cost more to produce in the end. For both the grill and the outter casing, the attractive plastic Nokia Lumia handsets were points of design and material inspiration. Behind that grill you’ll find three tweets and three woofers plus two mics (which aren’t being used yet but future proof the current hardware). The result is that bass heavy dance tracks sound powerful while folksy acoustic tunes are played clearly with individual instruments easily identifiable. 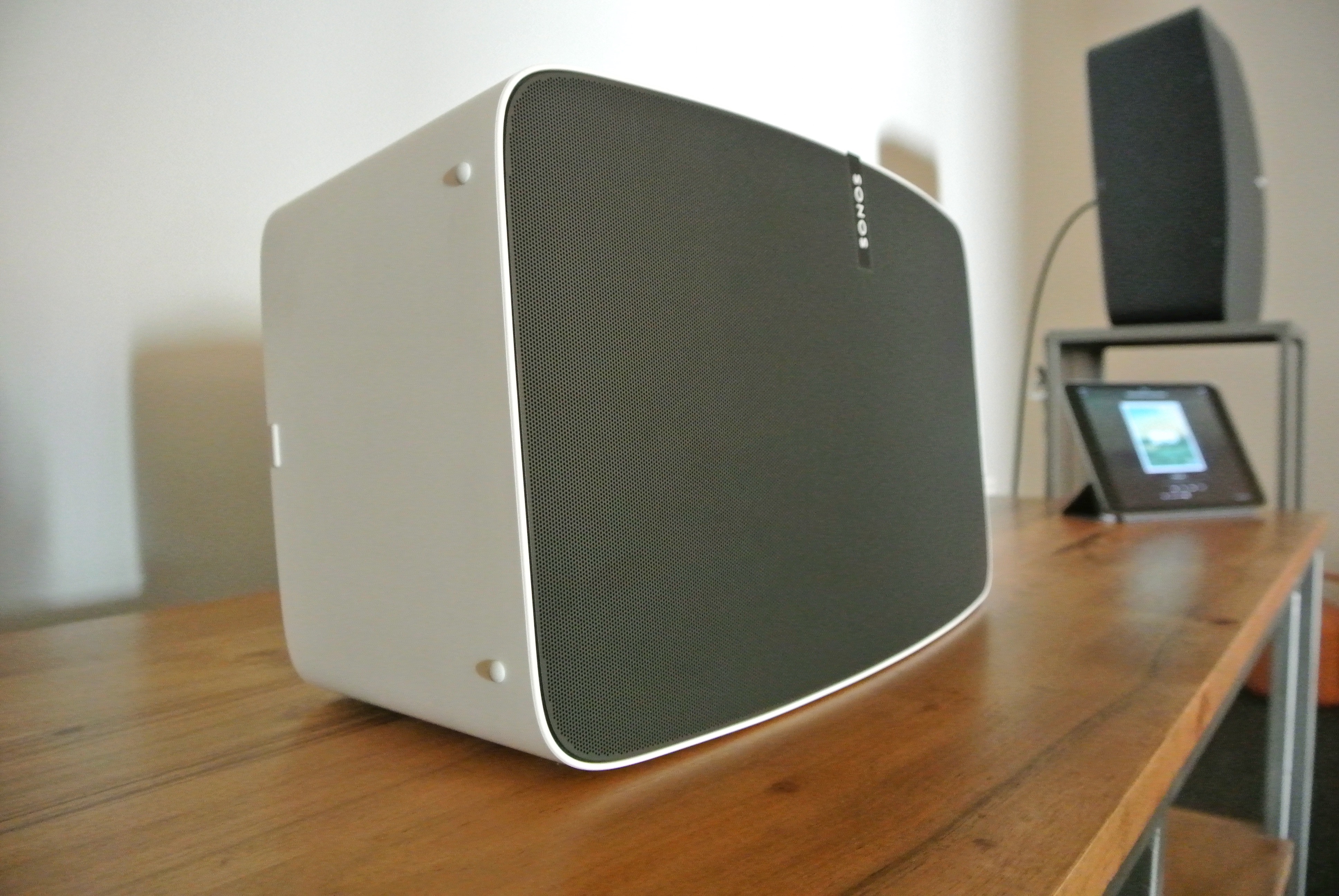 If I can be afforded one complaint over Play:5 (besides the usual lack of Bluetooth or AirPlay from Sonos) it’s the presence of these feet on either side of the speaker. Because Play:5 can be paired with another unit for stereo playback, it needs some sort of support to stand on its sides while still delivering HiFi quality sound. They’re designed into every unit, however, regardless of how many Play:5’s you own, which creates a visual blemish similar to the iPhone 6 camera bump design. The bumps are less noticeable on the black models, although I still prefer the iPod HiFi-like look of the white units. 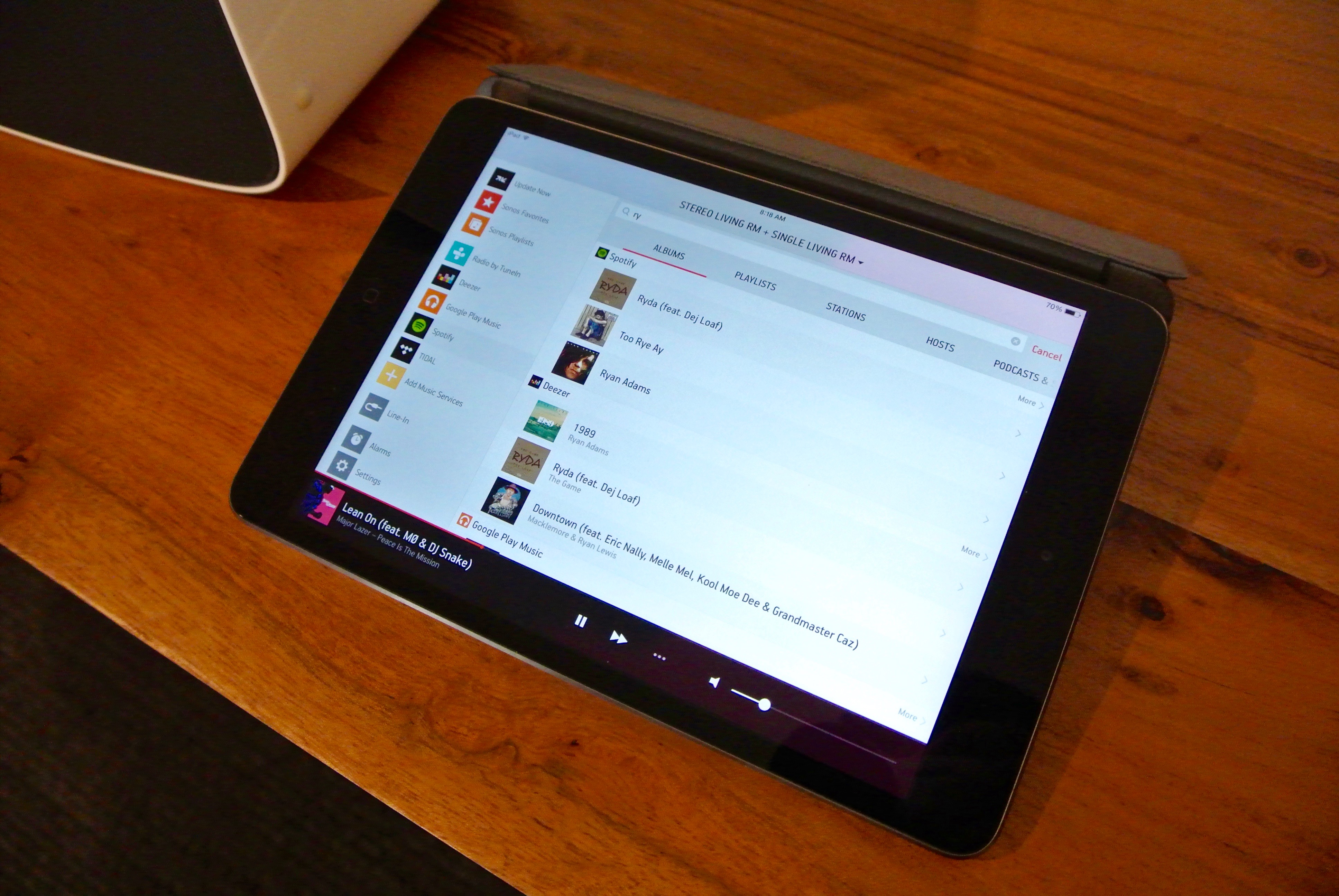 Launching with but not exclusive to Play:5 is Trueplay, a new software enhancement that lets Sonos speaker owners calibrate their speakers in their own homes with speaker placement in mind. Trueplay is found inside the Sonos app and limited to iOS to start. That’s because it uses the built-in mic on your iPhone, iPad, or iPod touch plus a pulsating zap tone that bounces from your speaker to fine tune it for your home, and Sonos found that Android handset mics vary too much to easily support initially.

The process involves walking around the room where you listen to your Sonos speaker and waving your iOS device up and down slowly for a couple minutes. The result can depend on how much adjustment is needed — the app gives you feedback on what to expect — and can either be minimal if placed well or dramatic if placed somewhere less than ideal for necessity.

After tuning your Sonos speaker with Trueplay, you can quickly toggle between using the preset it creates and going back to the default tuning to see how well Trueplay did. You can further adjust bass and treble to your liking as well. I’m young and life’s short, so naturally I felt the need to crank up the bass a little more after my own Trueplay testing. 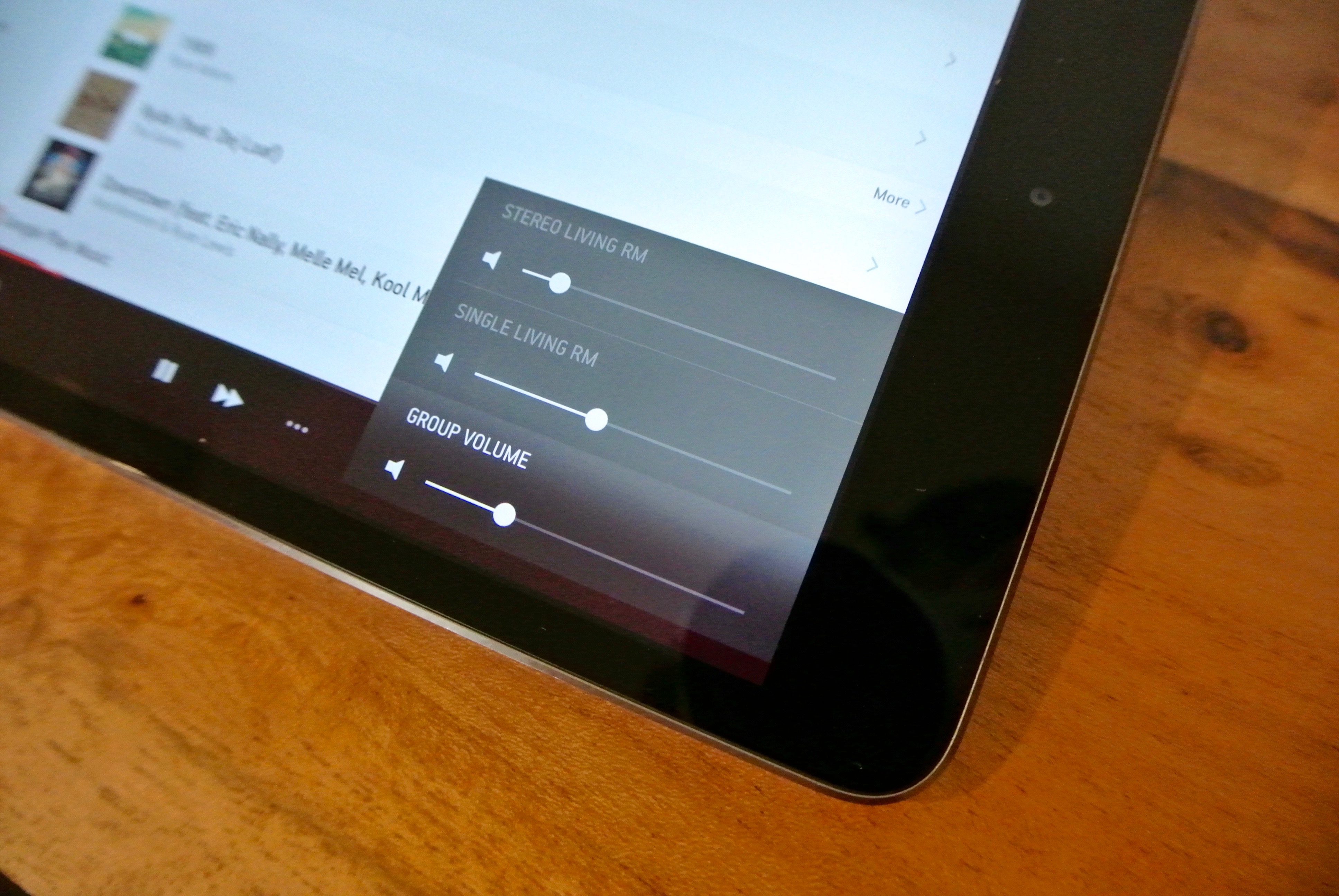 While Trueplay does need a quiet environment to work best, it takes into account the noisy lives we live in our homes sometimes. Before initiating the pinging sound to start the process, Trueplay listens for ambient noise like humming fans and similar noises to consider those during calibration. The algorithm Sonos designed for Trueplay even omits dog barks as testing found them to be an uncontrollable but easily identifiable interruption for Sonos owners with dogs.

During my briefing and hands-on time with Play:5 and Trueplay, Sonos opened up its offices with a 1-on-1 interview opportunity with various members of the leadership team including Sonos CEO John MacFarlane. And while the access and conversation was hardly Apple-like, much of what I was curious about involved the Cupertino company with answers like Apple’s.

How is Apple Music support on Sonos going and when they meet the “before the end of the year” deadline revealed at the beginning of summer? Apple and Sonos are working hard to bring Apple Music to Sonos and that’s as specific as they want to be.

Any interest in a Sonos Music Service to get in on the revenue earned from supported services like Spotify and Tidal? Zero plans since Sonos is a platform with a library of content sources from all over the world. 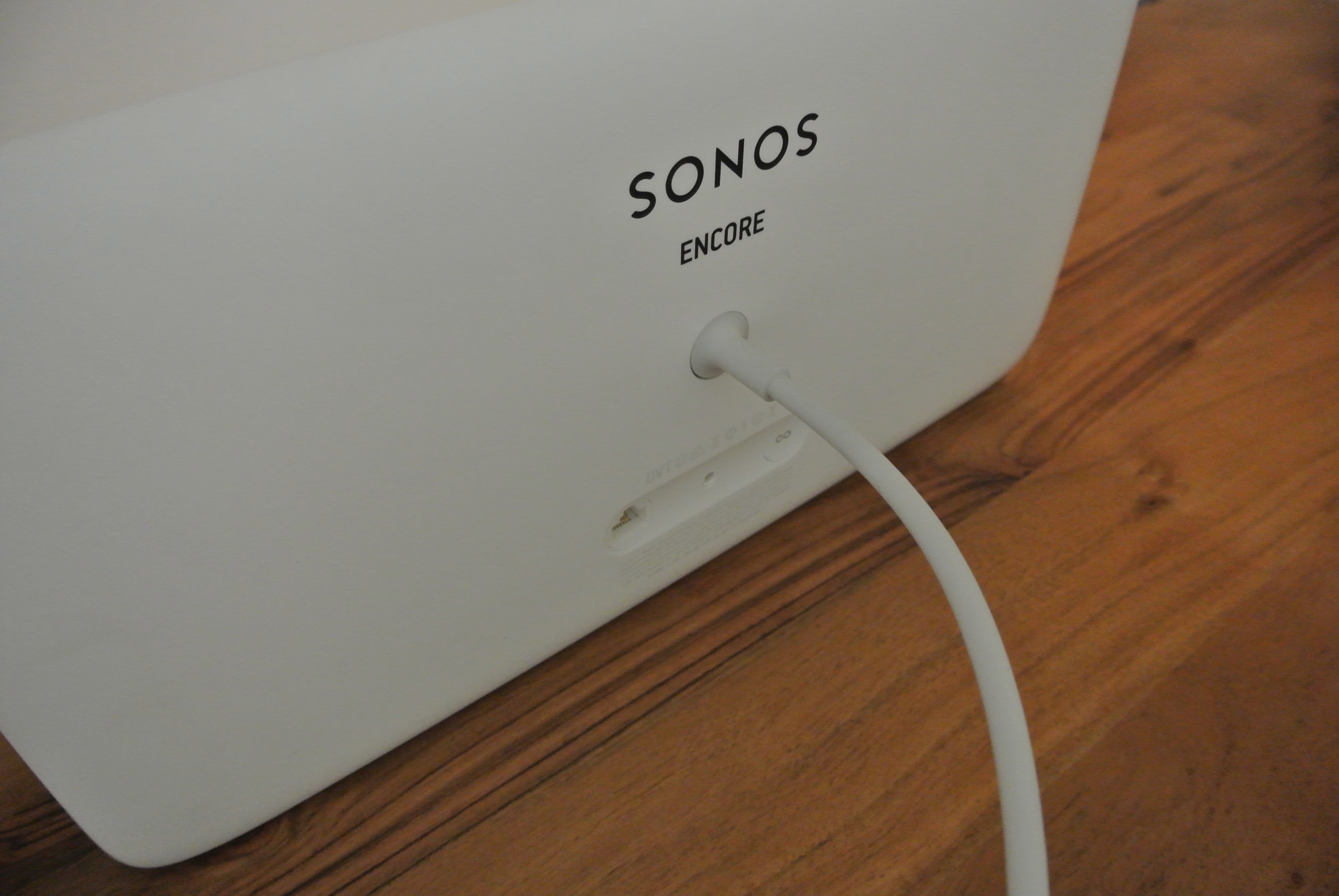 Sonos builds AUX and Ethernet ports into wireless home speakers (down to 1 of each on the new Play:5), so why not Bluetooth or AirPlay to bridge the gap for non-Sonos supported services? Sonos supports multi-room wireless playback from tons of streaming services, and uses the Chromecast model where content plays directly to the speaker over the Internet and uses the app as a remote of sorts. Using device-to-speaker wireless playback is fine for portable speakers, but Sonos speakers are meant to fill homes with music even when you take away the remote. So the solution for customers wanting this remains third-party add-ons.

So what about the missing pieces like streaming a podcast through Sonos with play positions synced to Apple Podcasts or Overcast? MacFarlane was quite candid here, admitting that while Sonos will be well positioned on streaming music services once Apple Music is ready, it has a huge opportunity to improve the experience for podcast fans… but not without pointing out that you technically can access podcast episodes from services on Sonos. This space is an important one for me as a podcaster and podcast fan.

Sonos is on iOS and Mac but not Apple Watch and Apple TV. Nothing to announce yet but Sonos is open to prototyping anything that enhances the Sonos experience for users. If Sonos needs any ideas, Apple Watch seems like a natural fit for a remote app while the new Apple TV could be a great central jukebox during parties. 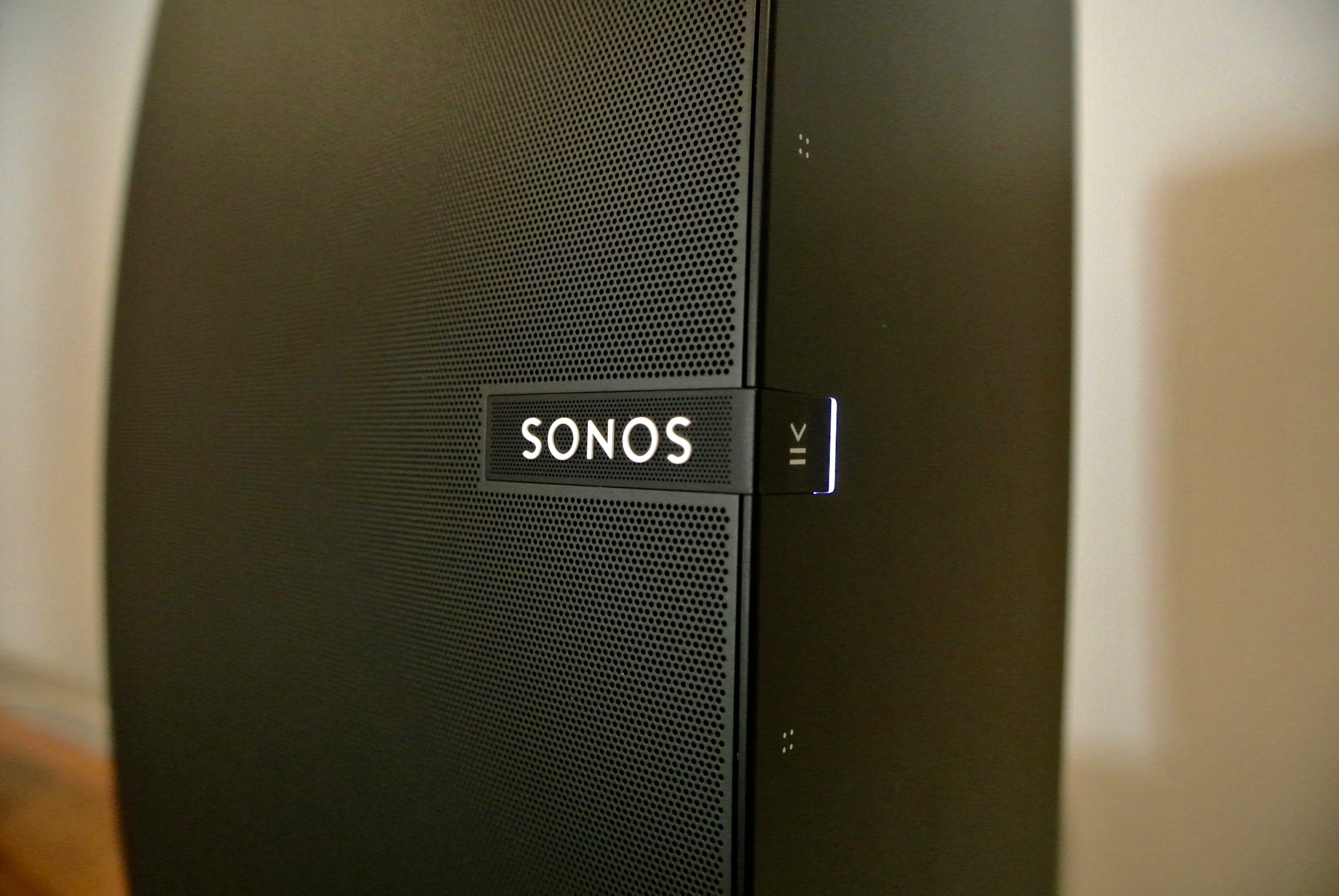 Finally, I asked why such an Apple-like company as far as design and experience goes isn’t present in Apple Stores. Is it lack of Bluetooth or AirPlay, or something else? The short answer is that there has been talk in this space in the past, but there hasn’t been a compelling reason for both Apple and Sonos yet. For one, multi-room playback is difficult to demo in busy Apple Stores, but Best Buy and Target do okay with selling Sonos speakers, right? Apple Music could be the missing link for both parties, though, as selling Sonos speakers would be another point to promote Apple Music subscriptions. Makes sense.

The new Play:5 is coming later this year from Sonos in both white and black models priced at $499. It replaces the original Play:5 and joins the Play:1 and Play:3 to complete the Sonos HiFi wireless all-in-one speaker family. Trueplay is also coming later this year with the new Sonos Play:5 as well as the now discontinued Play:5 which benefits from the new tuning feature. Sonos Play:1 and Play:3 will also gain easy speaker calibrating with Trueplay through an update to the Sonos Controller app coming soon.