The best Thunderbolt 2 dock for your Mac 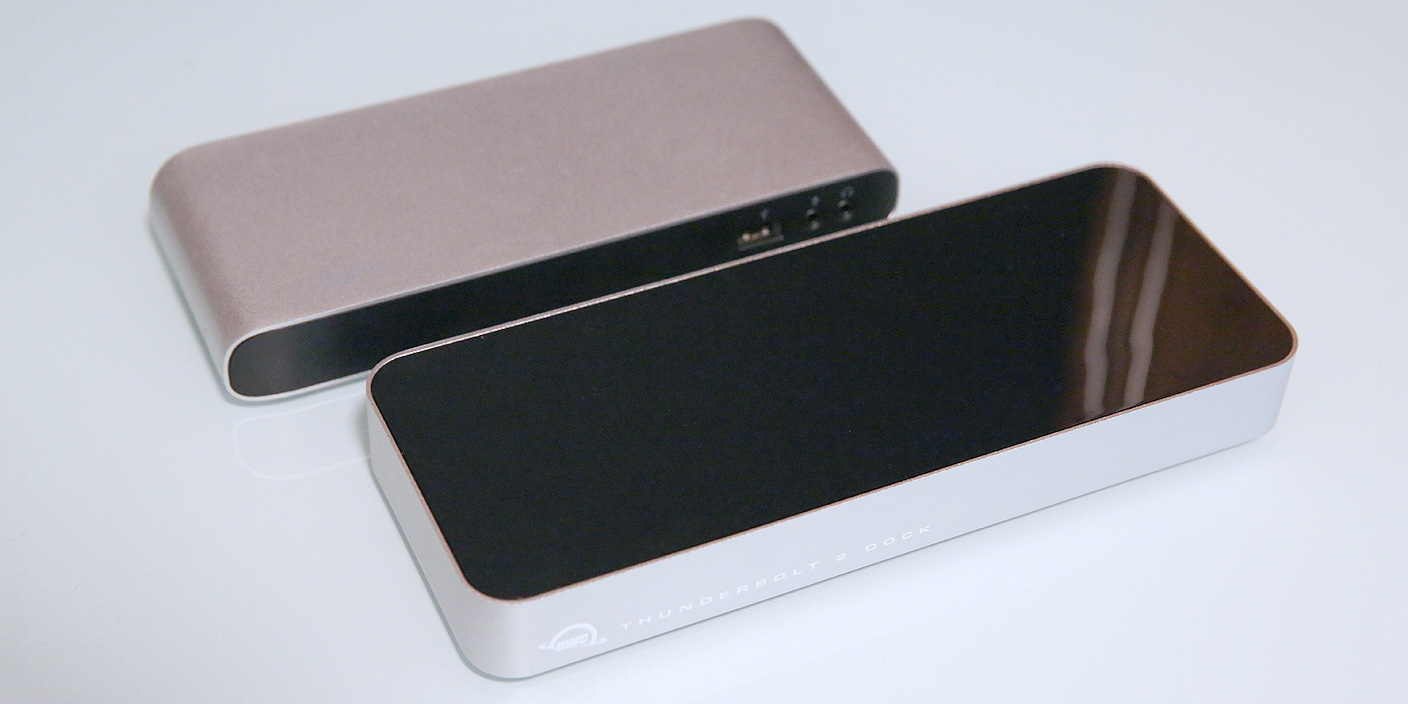 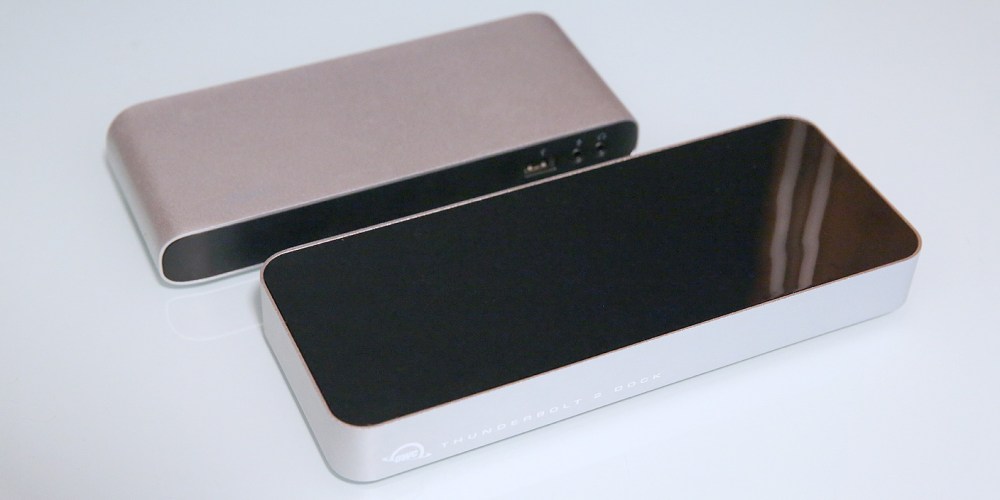 Apple and Intel’s Thunderbolt 2 standard has given Mac users — particularly professional Mac users — a premium, high-speed connector option for situations where bandwidth and speed are necessary: hooking up big, fast hard drives, high-resolution monitors, or even external graphics cards. The latest iMacs, Mac Pros, MacBook Pros and MacBook Airs all feature at least one Thunderbolt 2 port, a boon for expandability.

This year, Thunderbolt 2 docks have really taken off. Long-time Mac accessory makers have come up with a few different riffs on the same basic idea, leveraging a single cable to connect a bunch of Thunderbolt, USB, and audio/video accessories all at once to a Mac. This enables MacBook users to return home and make one connection to everything from an external monitor and speakers to external hard drives and card readers; it can also allow iMac, Mac Pro, and Mac mini users to connect devices built with connectors not found on their machines. 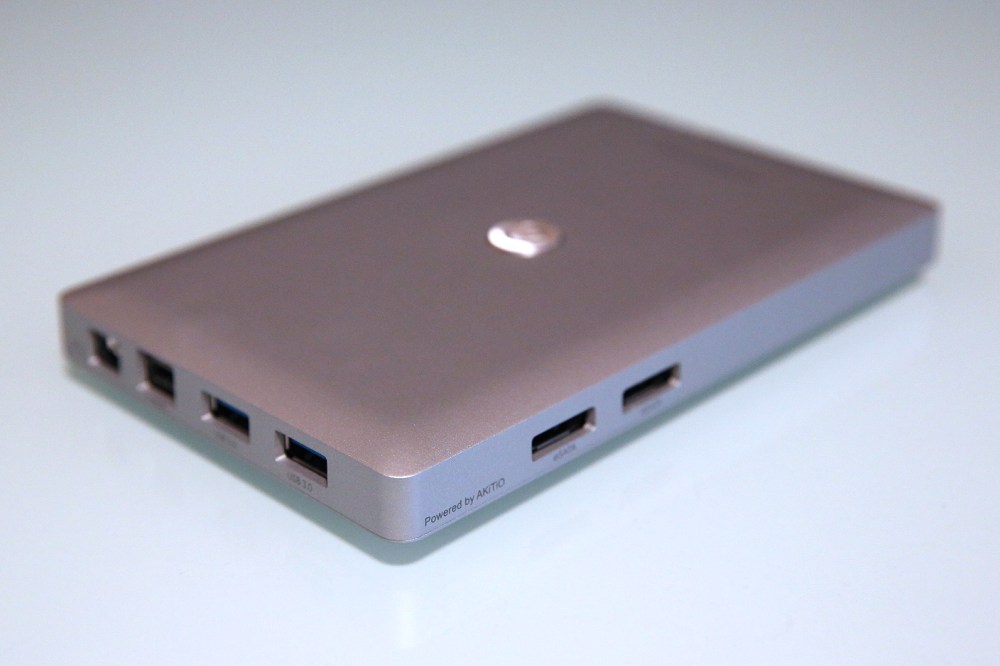 Akitio’s Thunder2 Dock (currently $209 via Amazon) is impressively thin, portable, and made completely from Mac-matching metal. Measuring only 6.2″ by 3.8″ by 0.65″ — around the size of a typical portable hard drive — it’s volumetrically the smallest Thunderbolt 2 dock I’ve tested, and the easiest to throw in a bag. In addition to a rarity — a FireWire 800 port — its edges contain one power port, two USB 3.0 ports, two 6GB eSATA ports, and two Thunderbolt 2 ports, allowing you to connect everything from a 4K monitor to pretty much any hard drive from the past 10 years. But to achieve its small size, it omits Ethernet, HDMI, and audio ports, making this a better option for connecting peripherals than a TV or speakers. We’ve reviewed it here.

Belkin’s Thunderbolt 2 Express HD Dock (currently $279 via Amazon) was the first Thunderbolt 2 dock to be announced, and remains (without justification) the most expensive option on the market. Cosmetically similar and functionally nearly identical to Elgato’s Thunderbolt 2 Dock below, Belkin includes three USB 3.0 ports, two Thunderbolt 2 ports, an Ethernet port, HDMI (4K) port, and two audio ports. The nice aluminum and plastic design started with the company’s long-delayed prior-generation Thunderbolt Express Dock, and defined the look of many rival options, but the same general port array is available in several competing products. 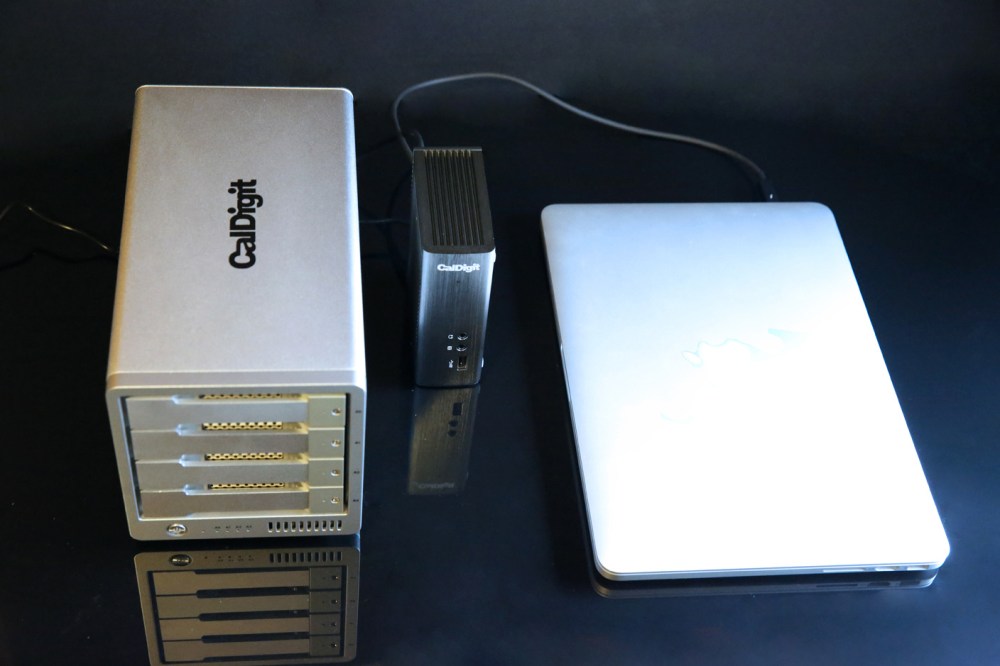 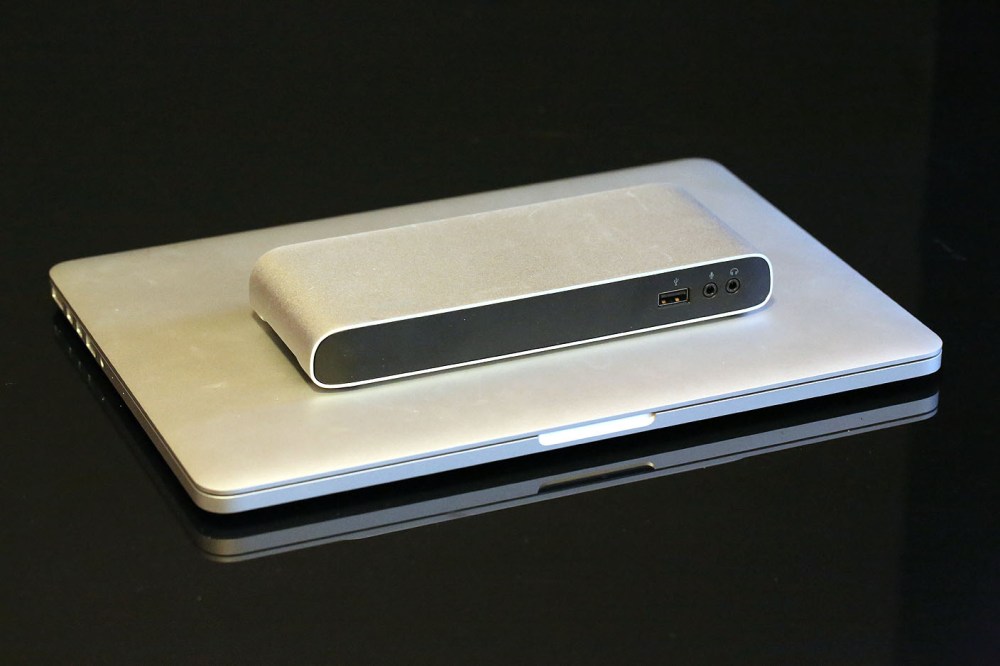 Elgato’s Thunderbolt 2 Dock (currently $208 via Amazon) is one of the earlier Thunderbolt docks to hit the market, and like Belkin’s model, helped to establish the features that would later be recognized as common across models: three USB 3.0 ports, two Thunderbolt 2 ports, a 3.5mm microphone input port, a USB-to-analog 3.5mm audio out port, a 10/100/1000 Ethernet port, and an HDMI 1.4b (4K-supported) port. Unlike Akitio’s design (but like most other models), it’s not designed to be portable, but the included audio, video, and data ports make it an ideal way to hook up everything from USB and Thunderbolt peripherals to speakers and an external monitor. It includes a Thunderbolt cable. We’ve reviewed it here. 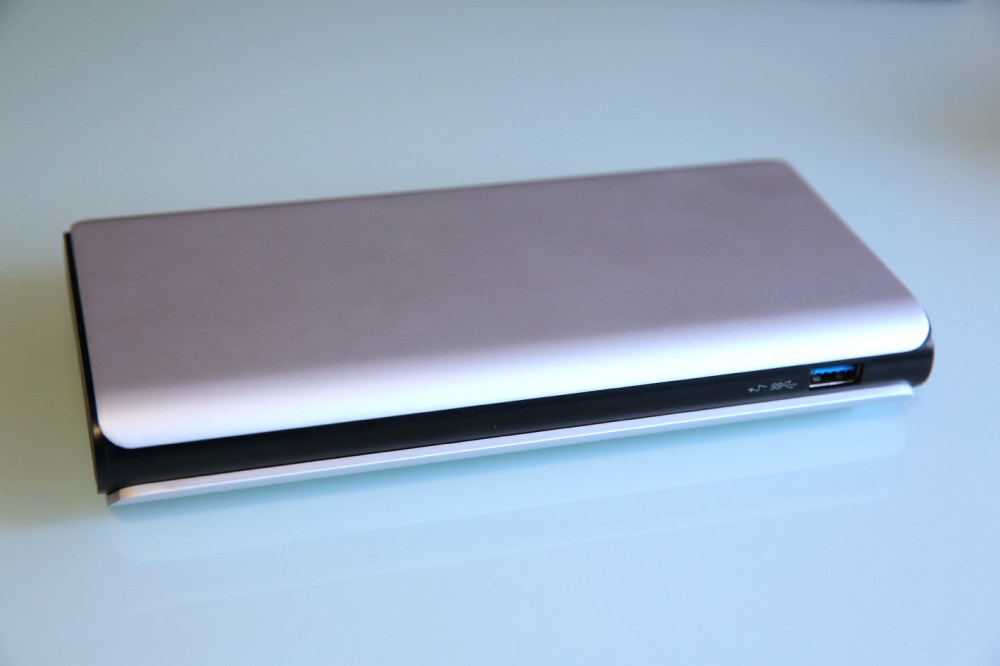 Kanex’s Thunderbolt 2 Express Dock (currently $200 via Amazon) arrived after Belkin’s and Elgato’s highly similar versions, featuring two Thunderbolt 2 ports, one 4K-ready HDMI port, one Gigabit Ethernet port, one 3.5mm microphone and headset port, a power-in port, and three USB 3.0 ports. That’s one fewer audio port than Belkin’s and Elgato’s designs, but unlike Belkin, Kanex supplies continual 1.5A power to its front-mounted USB port to guarantee it’s able to recharge your iPhone or iPad even if a computer’s not connected. Unlike some docks, it comes packaged with a Thunderbolt 2 cable, making its $200 price more attractive. We’ve reviewed it here. 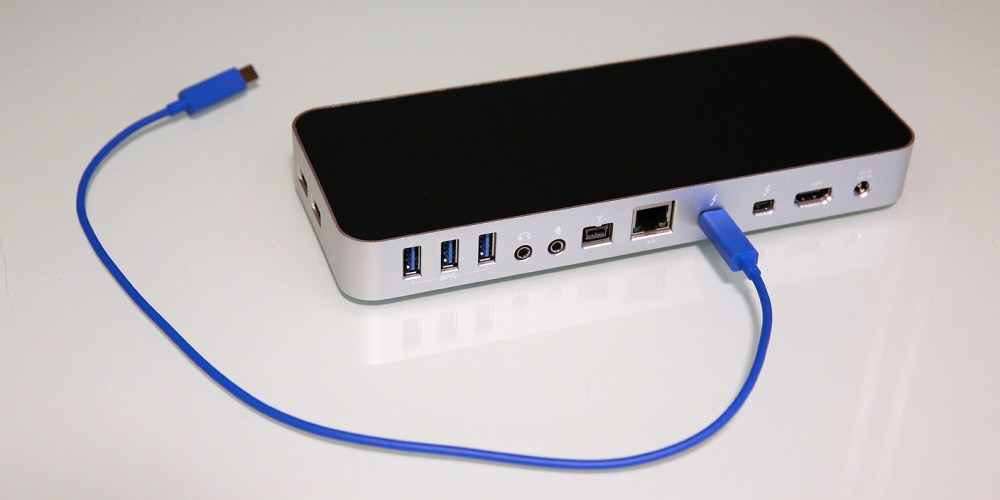 Other World Computing (OWC)’s Thunderbolt 2 Dock (currently $228 via Amazon) is in the middle of the pack price-wise, but one-ups its competitors with a gigantic collection of ports: a whopping five USB 3.0 ports (two of which are 1.5A-powered), two Thunderbolt 2 ports, one HDMI 1.4b (4K) port, a Gigabit Ethernet port, a FireWire 800 port, and separate audio-in/audio-out ports. Because of those ports, it’s the largest Thunderbolt dock I’ve seen — 9″ wide by 3.5″ deep by 1.1″ tall, not including its big external power supply — and it’s made with glossy black plastic ringed with silver aluminum, matching iMacs to a respectable extent. Notably, it doesn’t ship with a Thunderbolt 2 cable; a one-meter version is bundled optionally for $259. 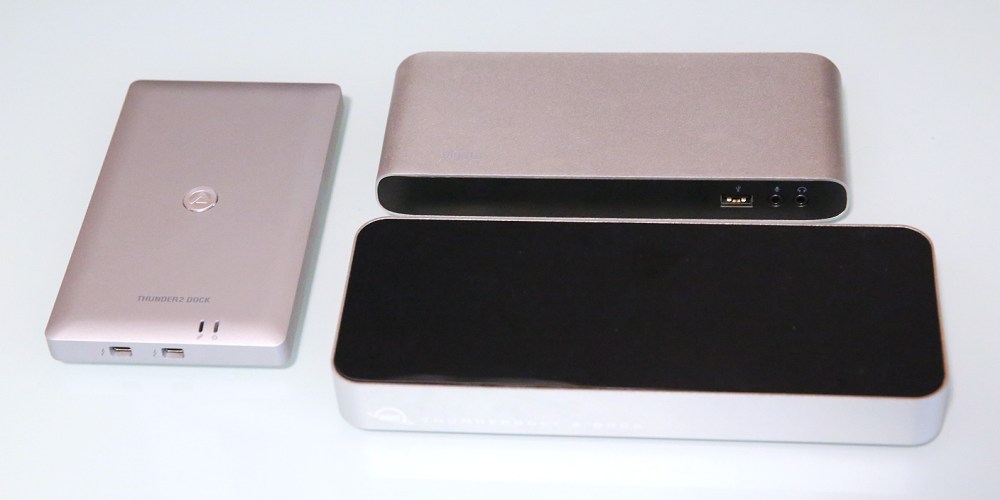 So Which Thunderbolt 2 Dock Do We Recommend?

Except for Belkin’s overpriced version, all of the other Thunderbolt 2 docks are in the $200 to $230 range, varying mostly in certain ports, external designs, and inclusion/exclusion of a Thunderbolt 2 cable. My advice would be to select the dock with the specific ports and design that best suit the Mac you intend to use it with, namely: