Hands-on: SteelSeries’ Nimbus is the first Made For Apple TV game controller, but should you care? 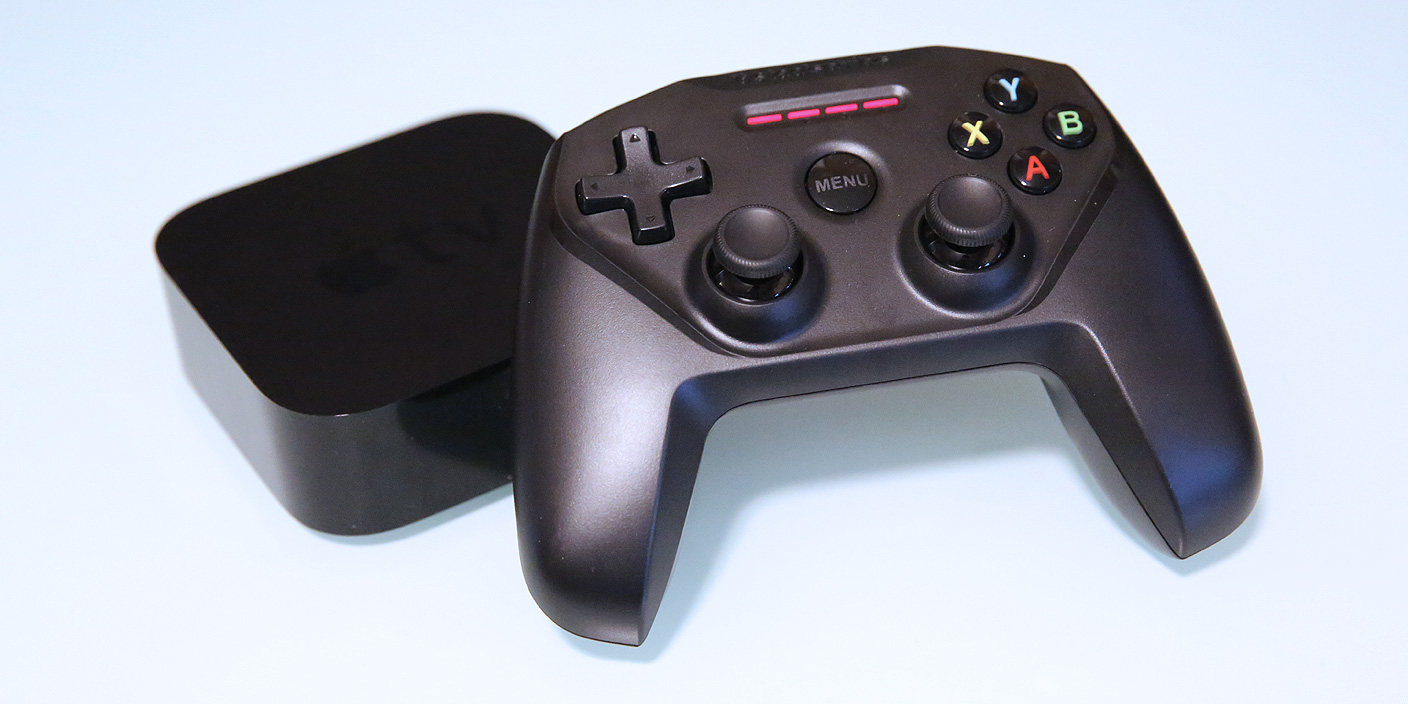 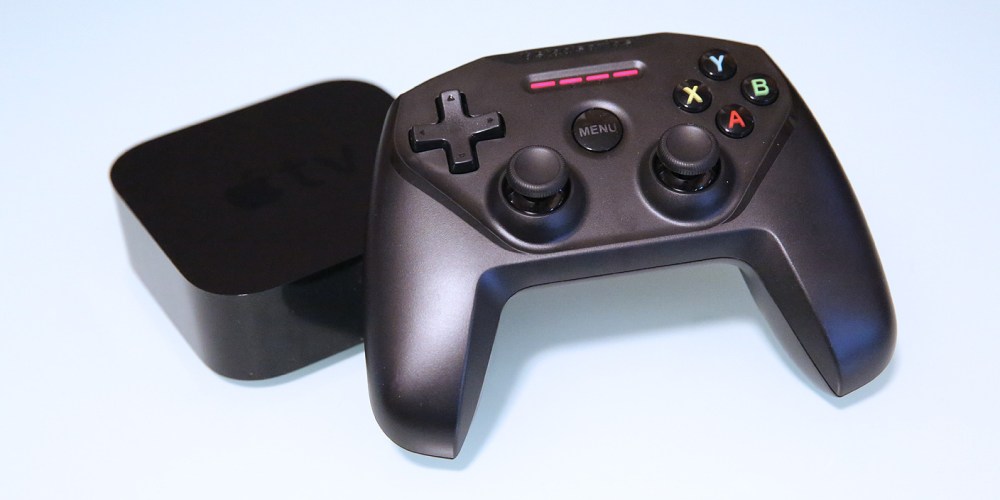 For the moment, the new Apple TV’s accessory compatibility can fairly be described as “confusing.” It’s confirmed that Bluetooth speakers and headphones — previously unsupported by older Apple TVs — work with the new model. On the other hand, Bluetooth keyboards, which previously worked with Apple TVs, do not. And Bluetooth game controllers… well, if they were Made For iPhone (or iPad), they work with the new Apple TV. But contrary to some erroneous early reports, if they were made for other devices (say, the PlayStation 4), they don’t.

So even though SteelSeries’ Nimbus ($50) has been pitched as the first “gamepad controller for Apple TV,” it’s kinda not. The company’s earlier Stratus (now only $40 refurbished) works with the Apple TV, as do Mad Catz’ nicer C.T.R.L.i and Micro C.T.R.L.i controllers. However, Nimbus is launching with newer technology at a not-insane price point. It has a Lightning connector built in for recharging an integrated 40-hour battery, a Bluetooth 4.1 wireless chip, and a design that was apparently — despite obvious similarities to many other controllers — co-developed by Apple itself. It also is the first accessory to ship with Apple’s new “Made for Apple TV” logo on the box. Here are some early thoughts on the Nimbus based on my hands-on experiences… 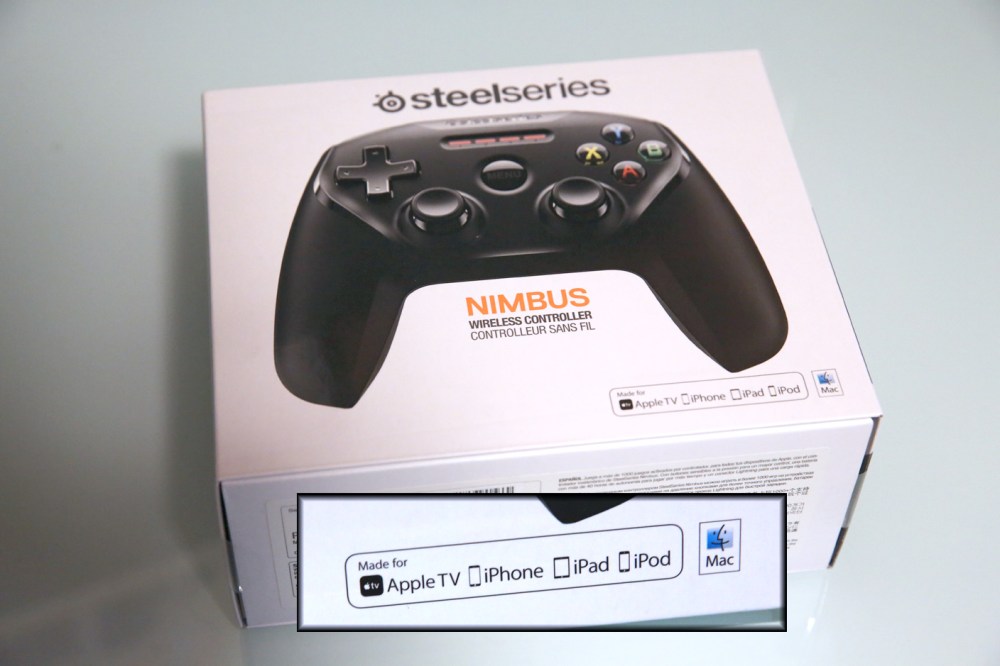 Packaging and “Made for Apple TV”

Nimbus arrives in a mostly white box that’s consistent with Apple’s recent accessory packaging coordination initiative. The most notable element of the box is the new Made for Apple TV, iPhone, iPad, and iPod logo that appears next to the increasingly dated-looking Mac compatibility icon; this is the first shipped accessory to boast an official “Made for Apple TV” marking. A list on the side of the package confirms that Nimbus was “Made for” the “Apple TV 4th generation,” as well as all iPhones from the iPhone 5 to the iPhone 6s Plus, all iPads from the “iPad 4th generation” to the iPad Pro, and the iPod touch 5th and 6th generation models. Macs with OS X 10.9 or later are also supported. 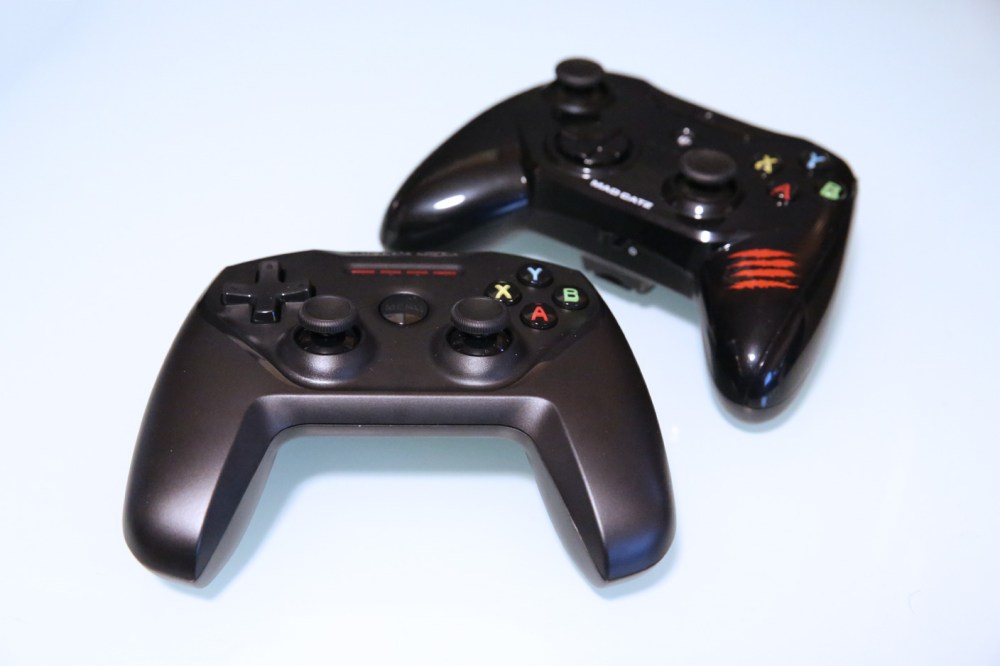 Nimbus is a lot like earlier MFi gamepads, sharing sizing and control positions with SteelSeries’ earlier Stratus XL. Following Sony’s lead with the DualShock, Nimbus’s face aligns a traditional D-pad with four action buttons, above two analog joysticks and a “Menu” button — relabeled from “||” (pause) on Stratus and other MFi game controllers. Four matte-finished triggers are on the top, two left and two right, straddling a power switch (labeled “Hold”), a Lightning port, and a Bluetooth pairing button. Apart from joystick locations and texturing differences, it’s a lot like Mad Catz’ earlier C.T.R.L.i in size and feel, as shown above. 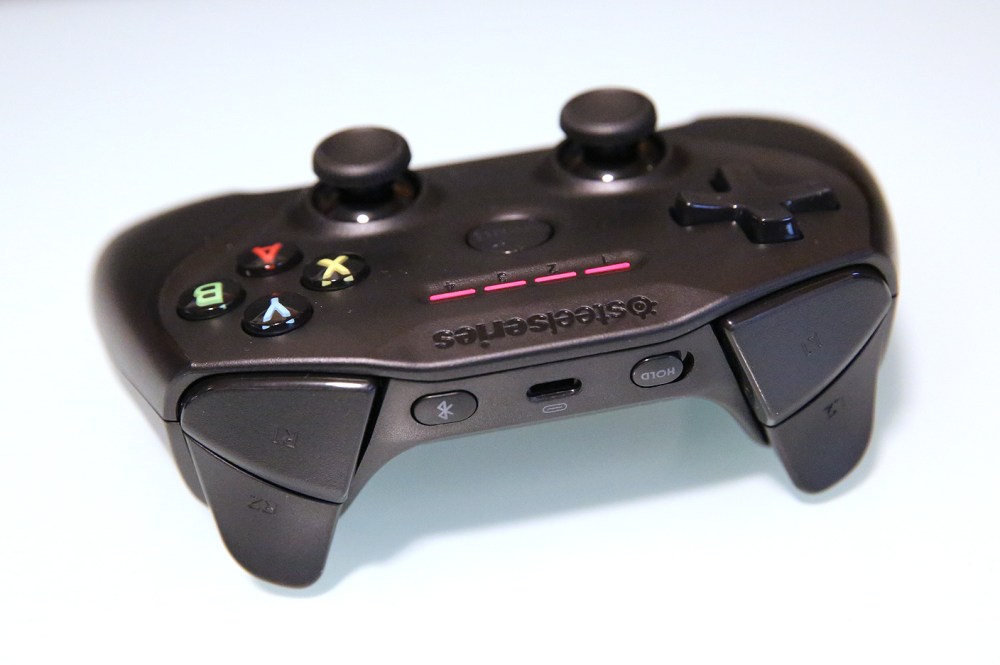 One would guess that the four-bar red light indicator on Nimbus’s face was there to show how much power is remaining, but it’s labeled “1, 2, 3, 4,” for reasons SteelSeries’ manual doesn’t explain. The numbers don’t indicate which of four controller positions a given Nimbus is using; the new Apple TV supports only two game controllers at once, and even when two Bluetooth controllers were connected, both had only their first light on. According to the manual, this light will flash for 10 seconds when the power reaches the “20 minutes remaining” stage. 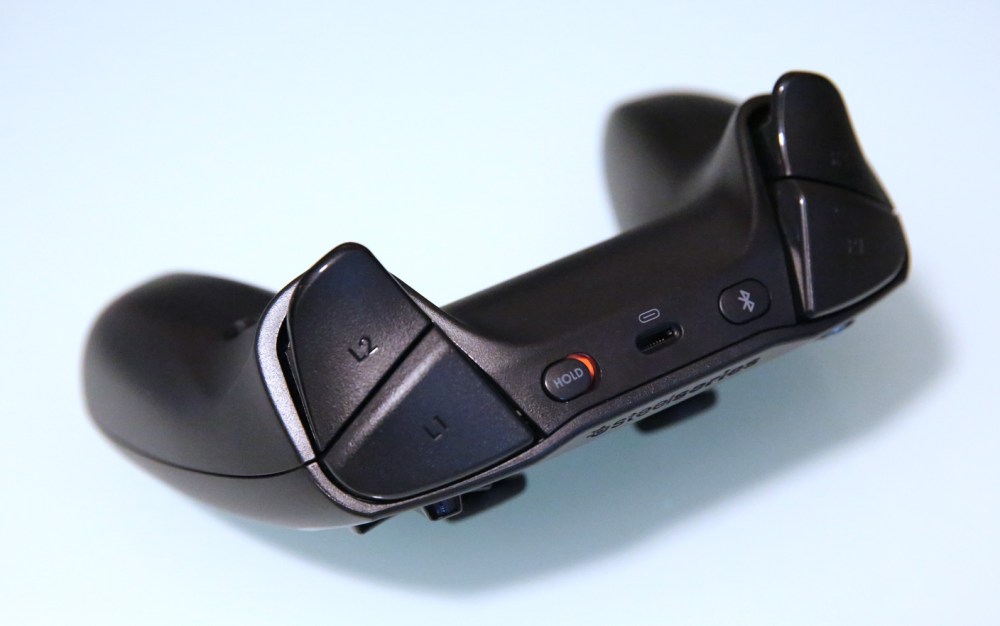 The obvious external changes from Stratus XL are subtle tweaks for hand comfort. Unlike its flat-topped predecessor, Nimbus recesses its front controls a little below the hand grips, adjusts the top button positions for easier pressing, and changes the textures of the analog joysticks’ rubber tops. This time, the L2 and R2 buttons hang off the controller’s edges, like Sony’s DualShock 4, making their pressure-sensitive triggers easier to grab with an outstretched fingers. I’d characterize the differences as subtle improvements, but Nimbus feels nice in the hand.

Internally, the replacement of the prior AA batteries with a rechargeable cell is a benefit, as may be the addition of a Bluetooth 4.1 wireless chip, an upgrade from Bluetooth 2.1 in SteelSeries’ prior model. I say “may be” only because the Apple TV ships with Bluetooth 4.0 support, and the real-world impact on battery life and performance is unknown. But just like Stratus XL, Nimbus promises 40-hour battery life. What’s missing? Rumble support, the titular feature of Sony’s DualShock series, and orientation sensors, found in the Siri Remote, are not included in Nimbus. 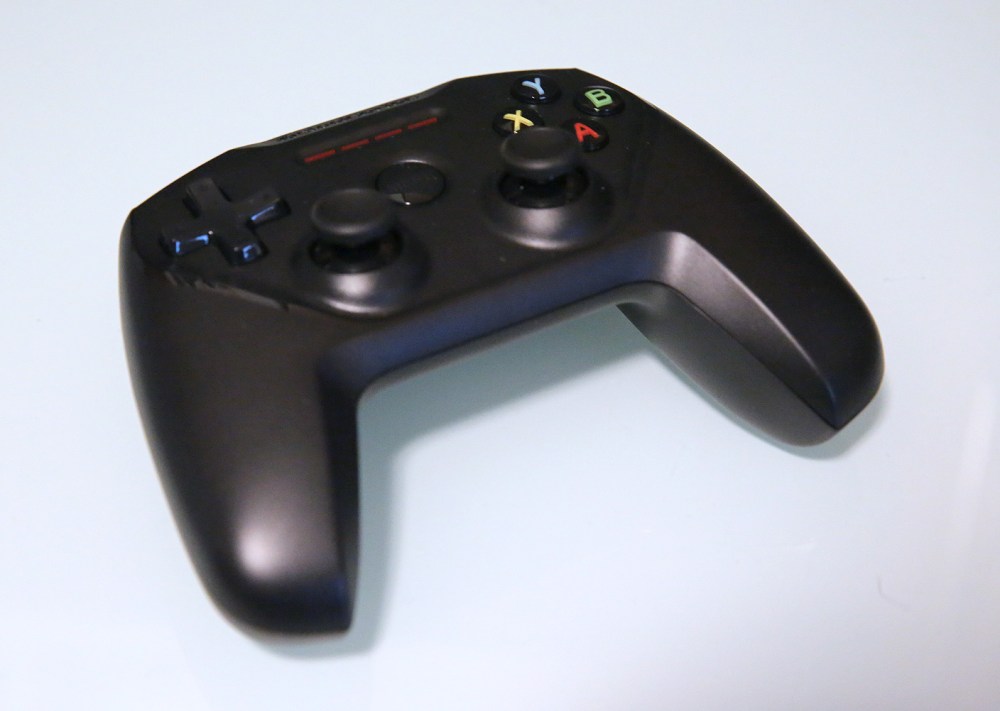 Putting aside pricing, compatibility has been the major sticking point for every game controller released over the past five years for Apple devices. And right now, it’s a question mark. Initial developer enthusiasm over the Apple TV’s gaming potential with dedicated game controllers took a massive hit when Apple announced that all Apple TV games would be required to fully support the (substantially different) Siri Remote as a controller, too. As a result, no one really knows how many games will include Apple TV game controller support — the problem that dogged MFi controllers two years ago when they launched with iOS 7. Since Apple is spotlighting Nimbus on its Apple TV mini-site, hopefully the publicity will encourage developers to step up with support. 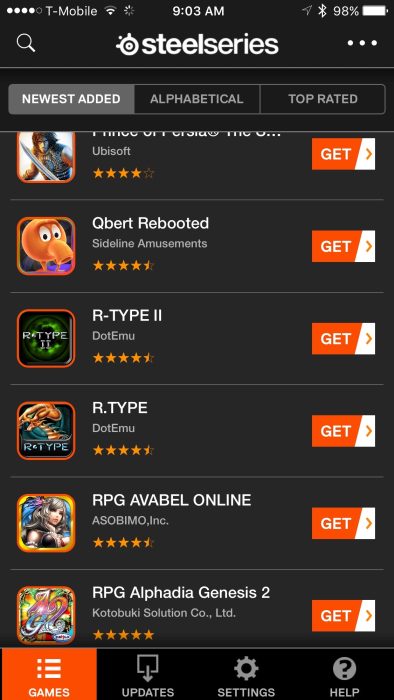 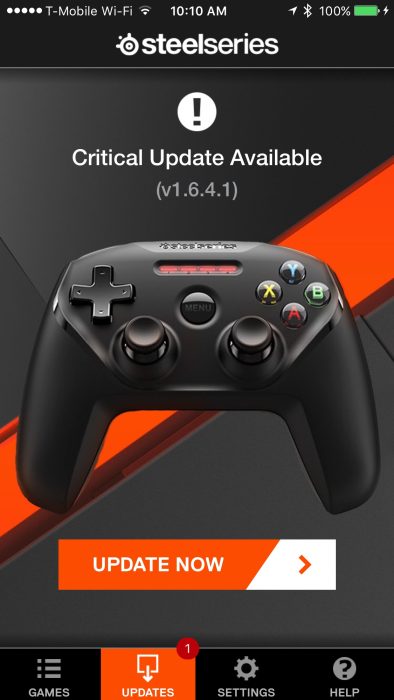 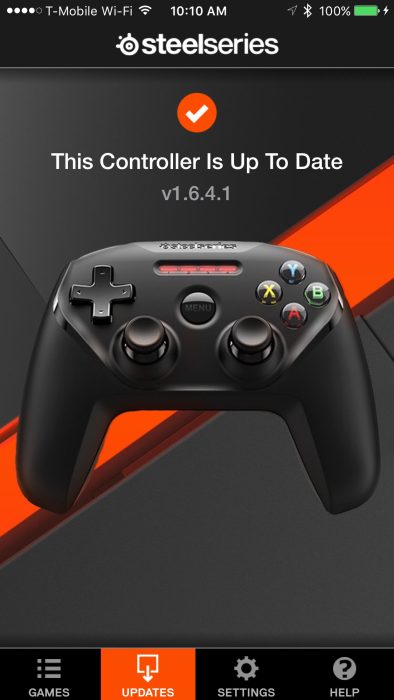 To help gamers discover compatible games, SteelSeries has released the free SteelSeries Nimbus Companion App, which includes a listing of known compatible iOS games, though there’s no Apple TV-specific sorting mechanism (yet). The SteelSeries app can also wirelessly update Nimbus’s firmware, which worked pretty quickly with a “critical update” after my controller arrived.

There are hundreds (not thousands) of supported iOS games, and I recognized more than handfuls of the titles, which is to say that they’re not all obscure. But the first Apple TV game I played, Mr. Jump, doesn’t have game controller support, which is surprising, as it literally only uses one button for in-game controls; iOS games I tried with it worked mostly as expected, though I had to pause Pac-Man Championship Edition DX with the B button rather than the Menu (formerly Pause) button, just like with the C.T.R.L.i. It’s going to be interesting to see how developers deal with controller support across multiple Apple devices/platforms.

Even if there aren’t many Apple TV games to use with it quite yet, Nimbus is easy to pair with the Apple TV itself — just like pretty much anything the new Apple TV supports. You just go into the Remotes and Devices menu, choose Bluetooth under other devices, and pair Nimbus. At that point, the D-pad lets you move up, down, left, and right, while an analog stick does the same thing but more closely mimics the Siri Remote’s track pad with gradual swaying. The A button selects, B goes back, and the Menu button also goes back. Holding down B or Menu takes you quickly back to the top menu.

Should You Buy One Right Now?

If history’s any guide, you’d be best off waiting at least a little while before grabbing any Made for Apple TV controller — Apple’s mandate of Siri Remote support means that third-party game controllers certainly aren’t necessary, and until there’s a big, great-sounding list of games that take advantage of them, your Nimbus might just sit around collecting dust. But at least SteelSeries got the price right this time, and came up with a compelling (if not quite DualShock 4-beating) feature set. Now it’s just up to Apple and game developers to provide everyone with good reasons to buy in.