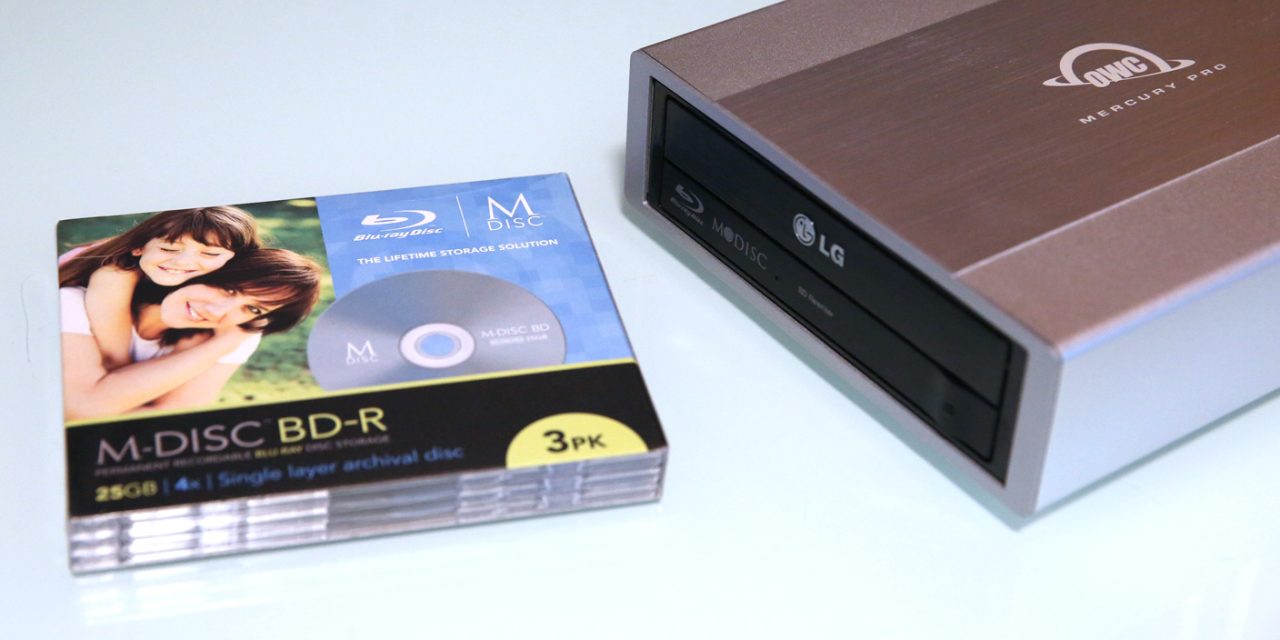 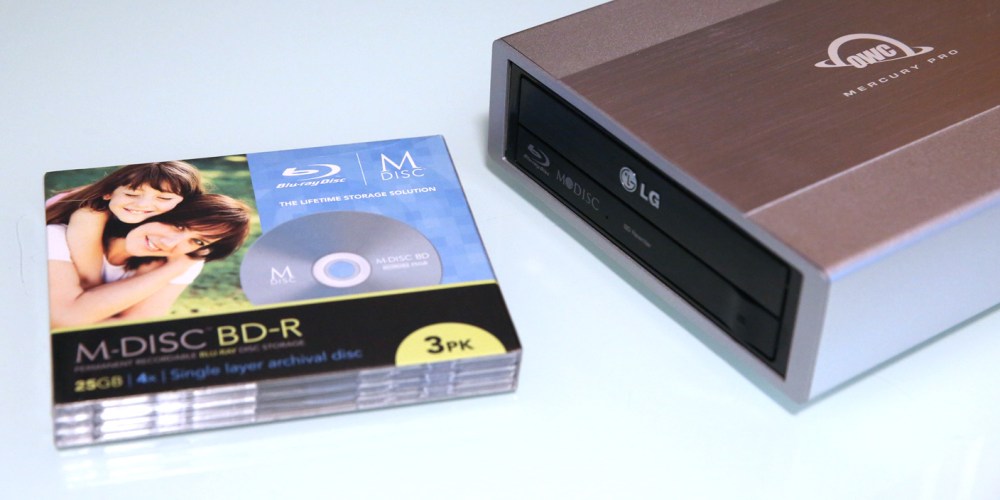 Apple gave up on optical drives several years ago. Citing Blu-ray Disc licensing issues and the growing popularity of Internet streaming, the company was able to leave CD, DVD and Blu-ray drives out of new Macs without suffering any drop in sales. Today, except for a single MacBook Pro model that hasn’t been updated since 2012, Macs are physically too thin to accommodate optical drives, and that’s not going to change any time soon.

But optical disc technology has soldiered on, adding new features to hook serious video and photo fans. “BDXL” Blu-ray Discs can now store up to 128GB of data, and Ultra HD Blu-ray Discs can hold full-length movies for 4K Ultra HDTVs. Separately, Millenniata debuted M-DISC, an archival disc technology that lets anyone burn DVDs or Blu-ray Discs guaranteed to last “centuries.” While M-DISCs must be written using new burners, they can be read by traditional DVD and Blu-ray players, ensuring broad compatibility. 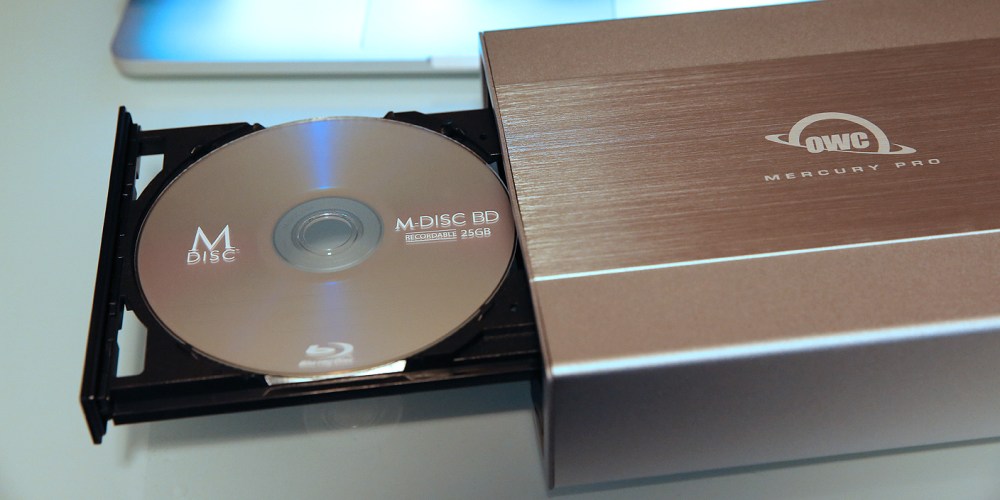 Even if the name’s not familiar, M-DISC is based upon fundamentally sound technologies. Unlike most recordable CDs, DVDs and Blu-rays, which store data by making microscopic color changes to their rings, an M-DISC writing surface becomes physically pitted with real grooves during the burning process. While the chemically-induced color changes in standard recordable discs wear off over time, M-DISC’s pits — like vinyl records and professionally-mastered optical discs — remain intact so the disc can continue to be read for years. Millenniata, the developer of M-DISC, boldly promises that “your data will be safe for centuries,” and notes that the discs have withstood “rigorous testing by the U.S. Department of Defense,” resisting “extreme conditions of light, temperature, humidity and more.” As blustery as the claims may sound, independent tests have subsequently demonstrated their superior resistance versus standard recordable optical discs. M-DISCs will certainly survive much longer, and much harsher conditions, than typical recordable discs.

There are currently three types of M-DISCs. The first are 4.7GB DVDs; these are the only M-DISCs that work with the entry-level $78 Mercury Pro, and sell for $2-$3 each. Next are 25GB Blu-ray Discs, which is enough capacity that eight discs could fully back up the average person’s most precious photos. These 25GB discs work with the $135 Mercury Pro Blu-ray burner, and can be had for under $5 each in bulk; OWC sells them in 3-packs for $14.97 or 15-packs for $67.50. There are also 100GB M-DISCs, which sell for $20-$25 per disc, and are not compatible with either Mercury Pro, as they require a BDXL M-Disc burner. 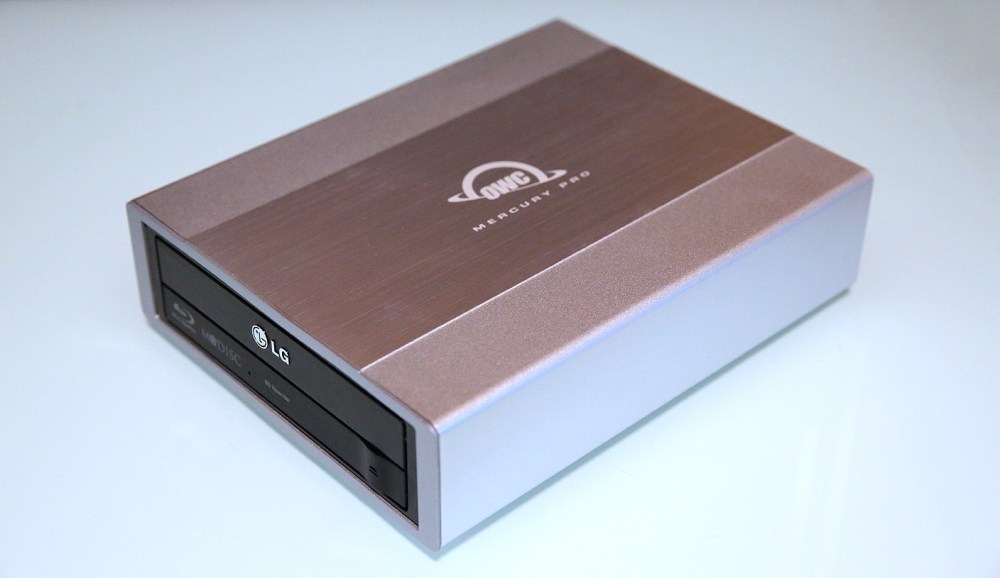 Measuring 6.6″ wide by 8.3″ deep by 2.2″ tall, the new Mercury Pro is a large and solid-looking external drive, using a Mac-matching sandblasted finish on the front, sides, top, and bottom, except for a large stripe of brushed metal on the centers of the top and bottom surfaces. A subtly convex button on the front right side manually opens and closes the disc tray, though your Mac can eject a disc in software. 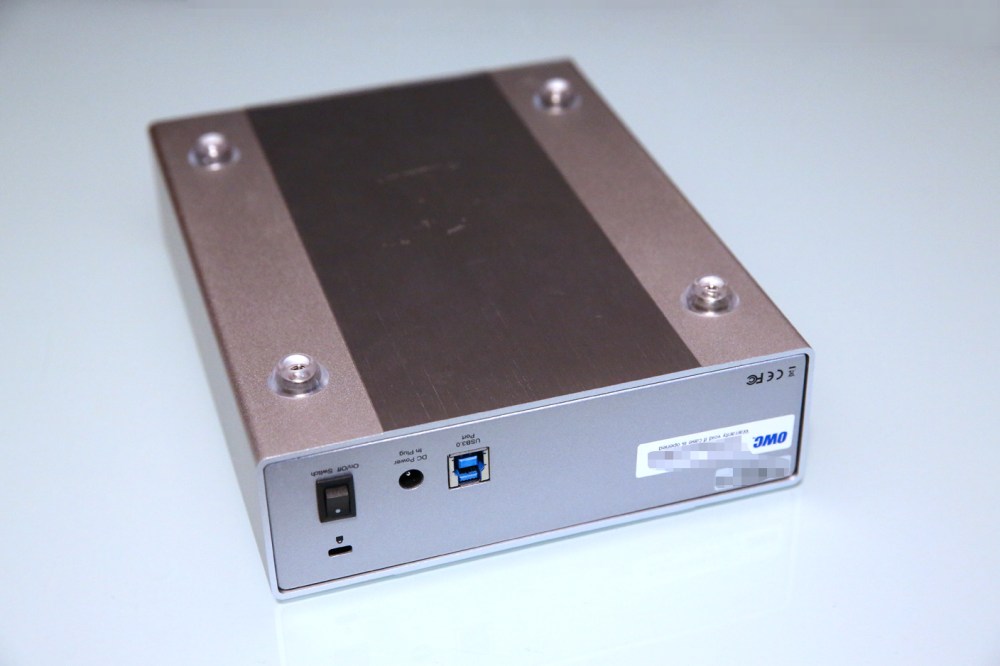 Located alongside power and USB 3.0 ports on the back, a rear power switch turns the drive on and off. Should you want to secure the drive in an office, there’s a slot for a Kensington-style lock above the power switch. Four clear rubber feet keep the metal from scuffing against your desk’s surface. 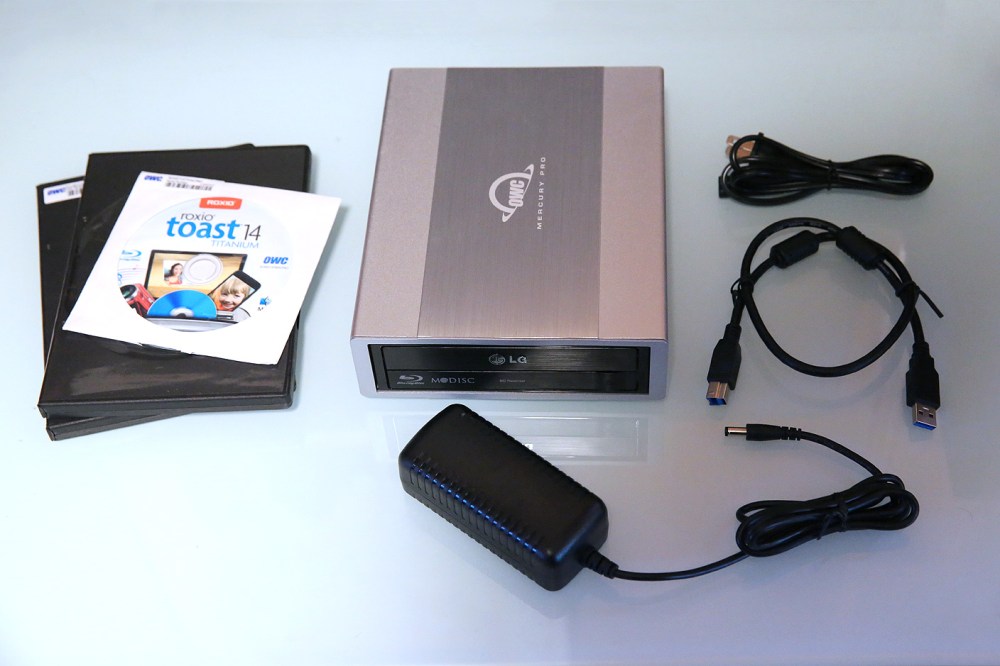 Every Mercury Pro arrives with a thick, shielded USB 3.0 cable and a small external wall adapter that’s required to maintain stable power; both parts speak to a desire to guarantee error-free, interruption-free burning, a prerequisite for disc mastering. Because of its physical size, and the requirement of external power, Mercury Pro is clearly meant to be set on a desk and left there, rather than carried in a bag and used on the go. As previously noted, the Blu-ray version of Mercury Pro comes with two blank BD-R discs. OWC notes that some resellers will also offer a further step-up version of Mercury Pro bundled with Roxio’s Toast 14 Titanium and Blu-ray-burning software. 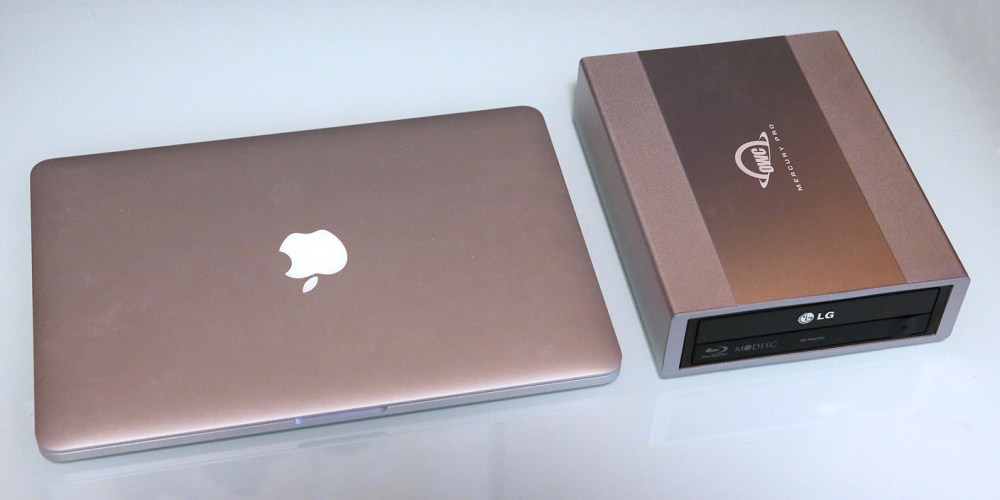 Connecting Mercury Pro to a Mac is as simple as plugging in a USB cable and flipping on the power. Without further software assistance — no driver is required — OS X can use it to burn or read traditional DVDs and CDs, just like Apple’s $79 external USB SuperDrives. The $78 Mercury Pro’s M-DISC DVD writing support doesn’t require special software unless you want to fine-tune the contents of your disc image before mastering it. 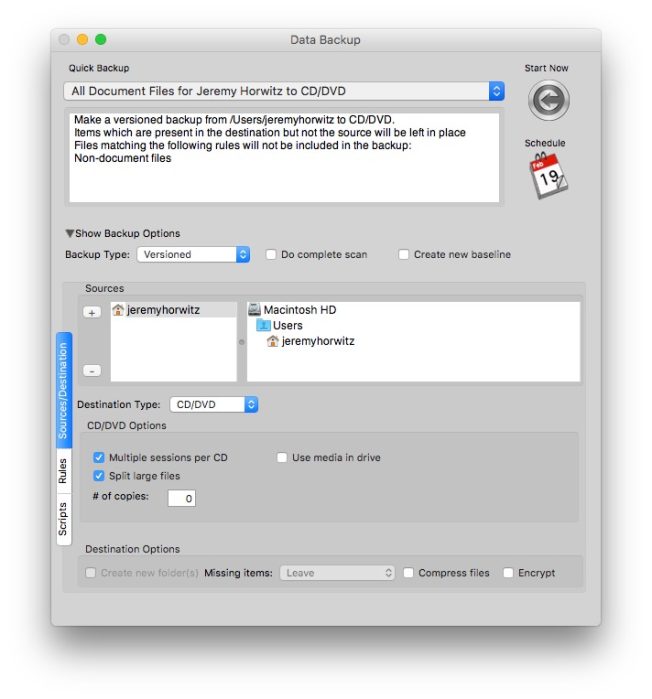 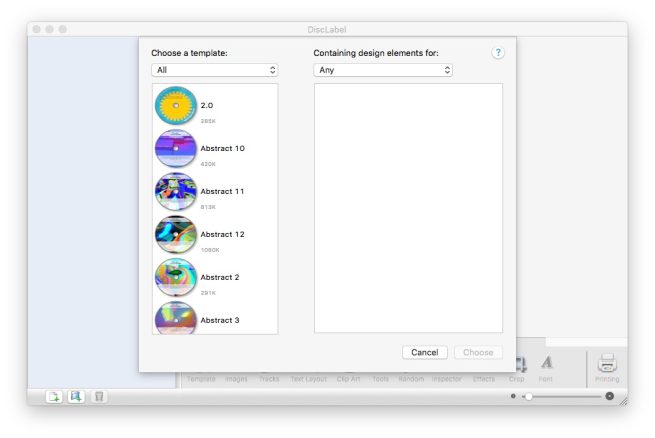 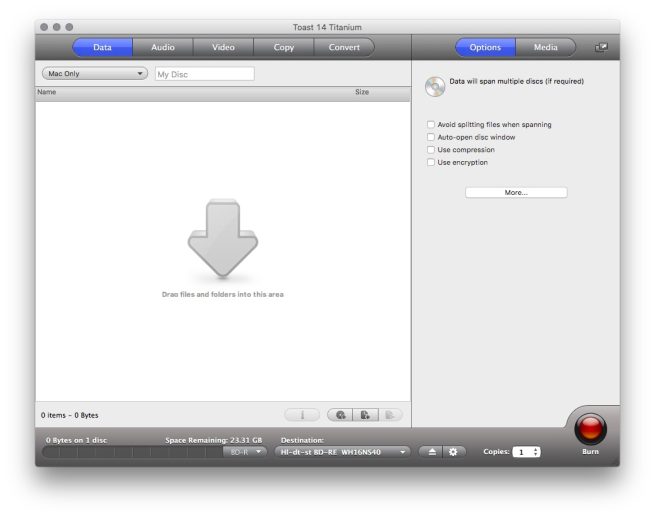 Mac users also get two free apps in the bundle: Prosoft Engineering’s Data Backup 3 and Smile Software’s Disc Label. (A PC app called NovaStor NovaBackup is also included for Windows users.) There’s no delicate way to say this: the free apps are old. Data Backup carries a 2007 copyright and appears to have last been modestly updated to version 3.1.9 a year ago. But despite some graphical glitches, it runs under OS X El Capitan, enabling you to create first-time and versioned backups of your hard drive (or preferred folders) to optical discs. You choose a source, pick a destination type (volumes or CDs/DVDs), then tell it whether to split large files into chunks that will fit on individual discs. Depending on what you’re backing up, it will create chunks of data that can be reassembled using multiple discs, optionally including subsequent discs containing only files changed since the last backup.

Similarly, Smile Software’s Disc Label hasn’t been updated since late 2010, and speaks to the end of the era when (some) people were actively printing disc labels and jewel case inserts (remember those) with their inkjet printers. The app still loads under El Capitan, and includes dozens of different templates for making these sorts of things, assuming you have a use for them. But it looks like a relic from the past. Last but not least, the PC version of NovaBackup is listed as compatible with Windows 7; make of that what you will. 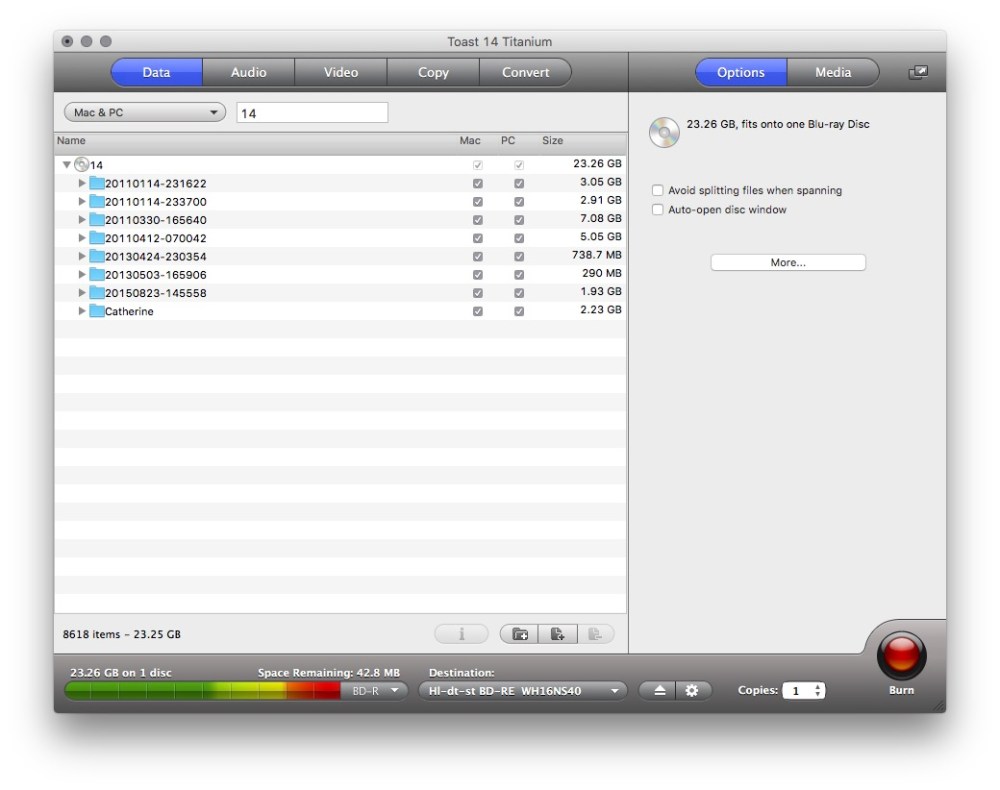 The optional app Toast 14 Titanium, aided by the Toast HD/BD Plug-In, is all but mandatory to take advantage of Mercury Pro’s Blu-ray mastering features. Having been polished years ago for optical disc mastering, video conversion, and pretty much every related function you can imagine, Toast 14 Titanium has just been updated to version 14.1 with full El Capitan support. During my testing, I used it to burn M-DISC archival-quality, Blu-ray-filling collections of home photos and videos — really, the key things I’d want to keep backed up for decades — and everything worked just as expected. 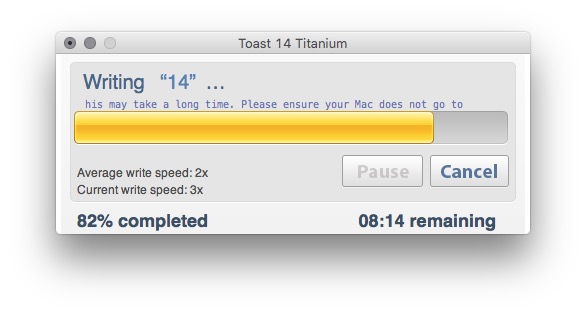 If there’s one complaint about the overall performance of the Mercury Pro and Toast 14 combination, it’s a primarily hardware-related limitation: speed. The Mercury Pro I reviewed is the Blu-ray version, based on LG’s WH16NS40, and although it’s billed as a “16X” drive, it writes M-DISC Blu-ray Discs at 4X maximum speeds. Similarly, the DVD version is based upon LG’s GH24NSC0B, which is a “24X” drive that writes M-DISC DVDs at 4X. In other words, you can expect to spend about an hour burning and verifying each M-DISC, though write speeds with regular BD-R and DVD-R discs may be significantly faster, and read speeds for discs — including M-DISCs — are much faster.

It’s also worth a brief note that Apple’s lack of participation in the Blu-ray standard means that commercial Blu-ray Disc playback continues to require separate software. This video explains how to make Blu-Ray Discs work using the free app VLC. 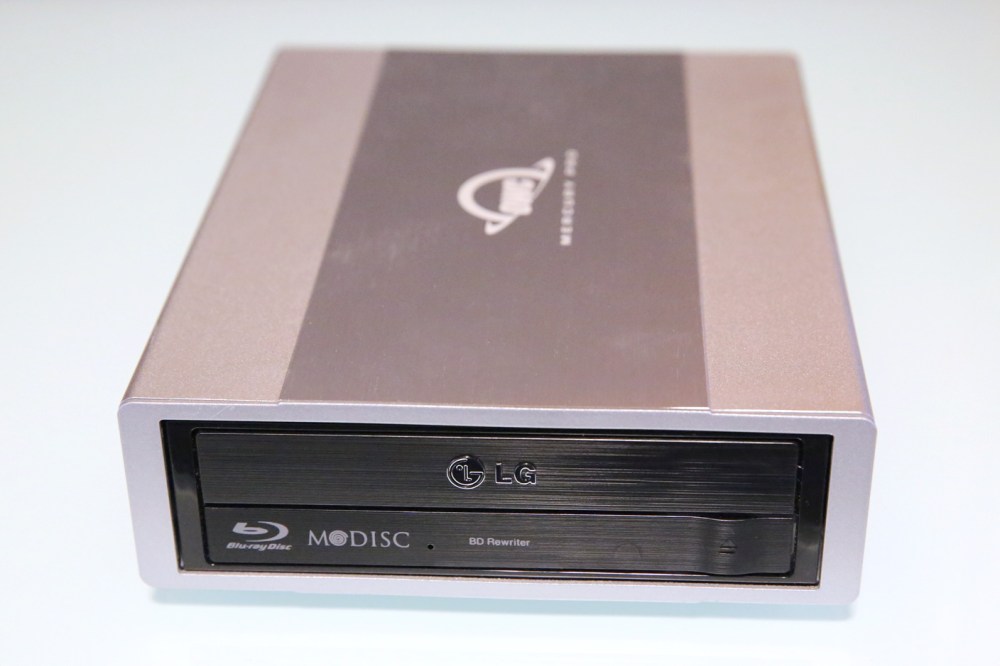 Prior to testing the new Mercury Pro, I had been out of the optical disc market for years, and had only the faintest idea what M-DISC was. But as I’m always on the lookout for ways to preserve my collection of digital photos and home movies, it’s truly interesting to see optical discs re-emerging as a viable alternative — particularly discs that focus on storage quality, not just quantity. There’s obvious long-term appeal in a drive that’s capable of creating long-lasting, archival copies of precious memories, easily viewable on common DVD and Blu-ray Disc players. If that’s something you’re looking for, each of OWC’s Mercury Pro bundles offers a nice drive and basic software to get you started.