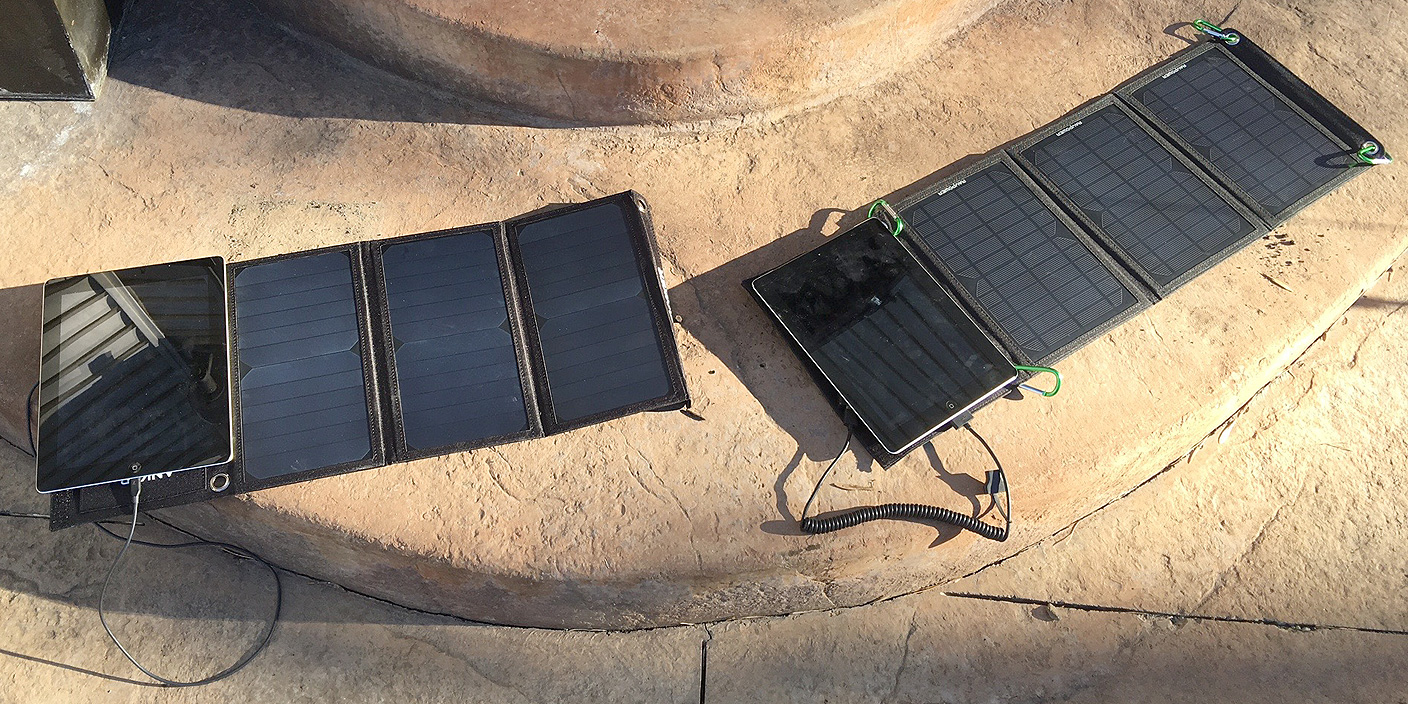 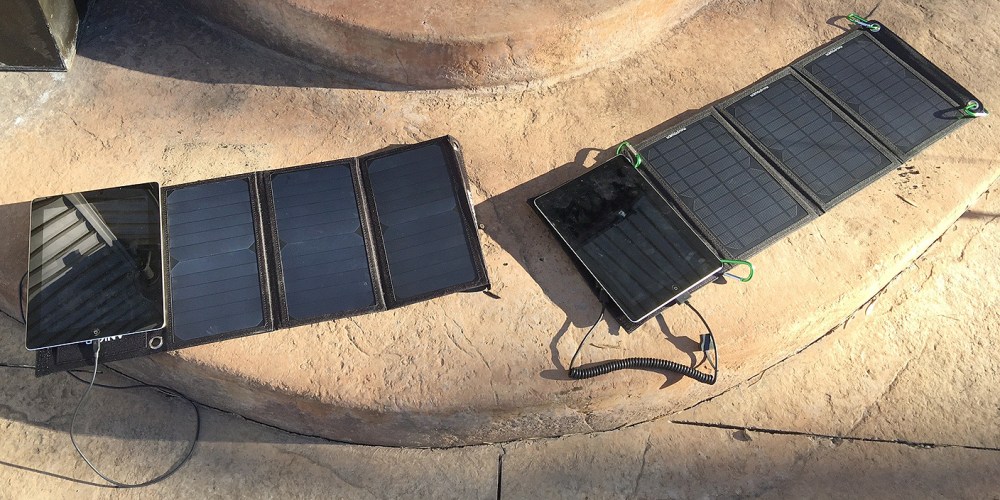 For whatever reason, accessory companies commonly send out review samples of solar-powered Apple accessories late in the year — rarely if ever in July, when the sun is at its peak pretty much everywhere in the United States. So even though I’m a fan of solar power, my ability to make the most of these accessories is naturally limited by the modest sunshine available for testing. The wisest solar-powered accessories I’ve tested hedge their bets by storing energy in batteries that can be used (and wall-recharged) even when the sun’s not out. Others become worthless when the sun goes away.

Anker’s 21W PowerPort Solar Charger ($55) and RAVPower’s 15W Solar Charger ($50) are portable solar panels connected to USB ports. They’re extremely similar to one another, each hiding two USB ports in a pocket to the right of three solar panels. Unlike Solartab (reviewed here), neither has a built-in battery, so you can only use them when the sun’s out — and optimally, directly overhead. One strikes me as a slightly better pick than the other, but unless you live in a frequently sunny climate and have hours to spare under the sun, or plan to travel somewhere with sunshine and no wall outlets, there are better-priced and more practical ways to keep your devices fueled up… 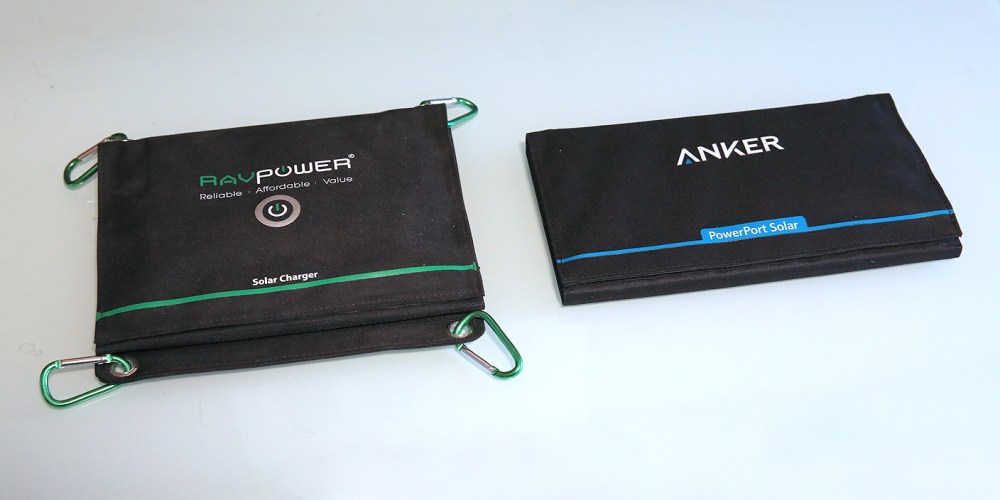 Anker’s and RAVPower’s designs are so similar that they could have come from the same factory — each is a black canvas folio held closed with one strip of Velcro, measuring roughly an inch thick when folded. Four metal-reinforced holes in each charger’s corners let you attach carabiner hooks to mount the opened panel, most likely on the outside of a large camping/hiking backpack; RAVPower includes lightweight green and silver metal hooks, while Anker lets you supply them yourself if you need them, packing in a micro-USB cable.

Aesthetic differences between the units are modest. PowerPort Solar is taller and narrower, with around a 6″ by 11″ footprint when folded and an 11″ by 26″ footprint unfolded, while the 15W Solar Charger is 8.5″ by 10″ folded and 10″ by 32″ unfolded. Anker’s twin USB ports are in a single box that’s permanently attached to the inside of PowerPort Solar’s pocket, while RAVPower’s two ports dangle separately from cables within its pocket. Both companies expect that you’ll supply your own Lightning cables for use with Apple devices, and suggest that you tuck your device into the pocket to avoid exposing it to direct sunlight while charging; the pockets are unfortunately only large enough for an iPhone (or similarly-sized battery pack) at best, not an iPad.

Each product makes a disclosure that you’ll need bright sunlight to make it work, but Anker’s is a little more telling, with a smiley face next to a full sun, a “neutral” face next to a clouded sun, and a frowning face next to a raining cloud. RAVPower skips faces in favor of check marks and X’s, giving checks to both sunny and partially cloudy, and an X next to the raining cloud. My personal impression is that both companies are overly optimistic about their chargers’ ability to perform in partial sunlight. 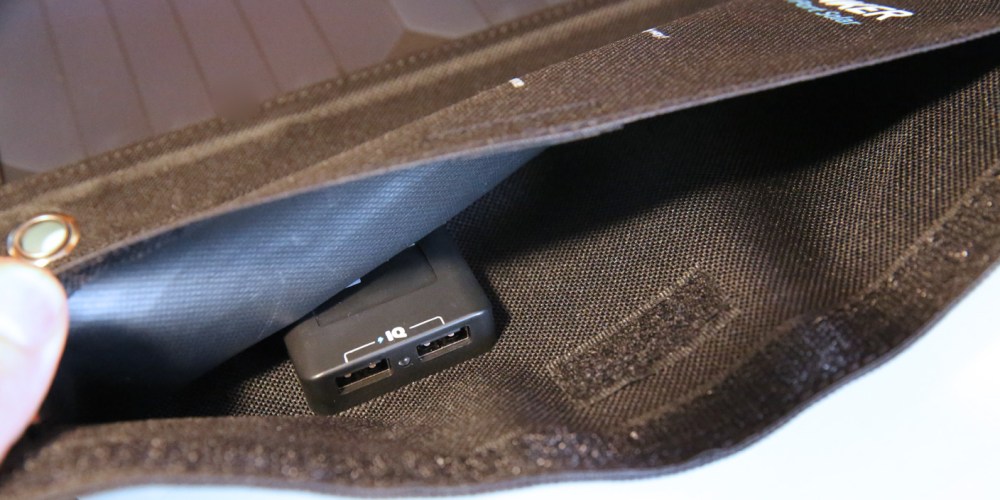 As their wattages indicate, there are power output differences between the accessories. PowerPort Solar promises 2.4A output on either port, capped at 3.0A total with both ports, while RAVPower’s ports are 2A and 1A. This won’t matter for most iPhones or iPads, but if you’re using an old, power hungry iPad 3/4 or a new iPhone 6/6s Plus, you’ll find that power is compromised when two devices are charging at once. In either case, most iPad and iPhone users should expect that a single device will — under optimal sunlight — recharge in the same amount of time as with Apple’s wall chargers, which is to say 2 to 5 hours. 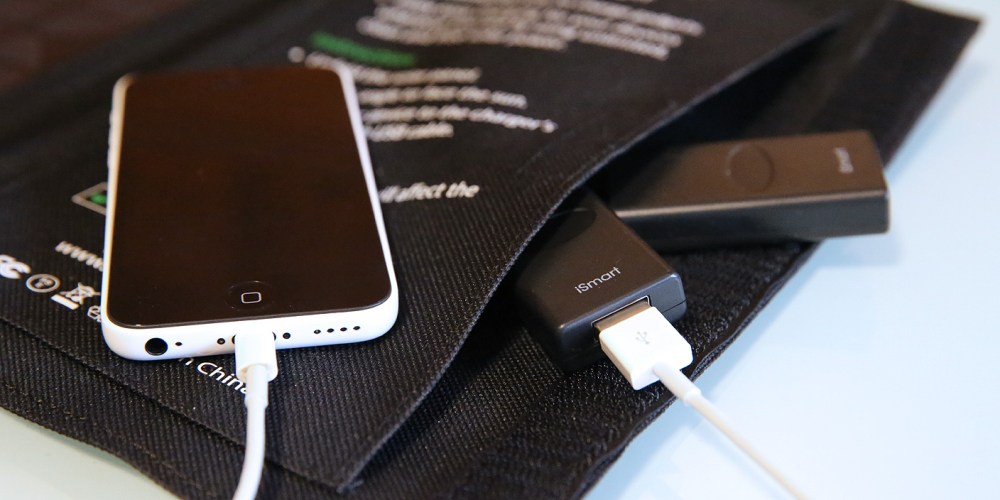 Unfortunately, my testing of both accessories was at best inconclusive. Used outdoors during what iOS’s Weather app called “mostly sunny” conditions, notably with brand new Apple and Anker MFi Lightning cables, each solar panel generated “this accessory may not be compatible” warnings — and didn’t charge its connected test iPad. Support pages suggest that this warning sometimes comes up when the cables are damaged or non-MFi, which wasn’t the case here. My impression is that “mostly sunny” (at least by local standards) actually falls into the frowning face or “X” category, contrary to both products’ somewhat more optimistic labeling. On a chilly November day, expecting the sun to recharge your iPhone probably just isn’t realistic.

That having been said, user reviews of both solar panels have been a lot more positive when strong sunlight is available, while reaching similar conclusions to mine when the sun’s impeded. A solution, of sorts, is to attach a battery pack to the solar panels rather than your device, so that any energy that’s captured from the panels gets stored somewhere. Additionally, while some people have suggested that both of the panels fall a little short of the peak output claims — each reaches around 2.8A rather than 3.0A under optimal sunlight conditions — that’s not surprising given similar fluctuations in even non-solar charging accessories. 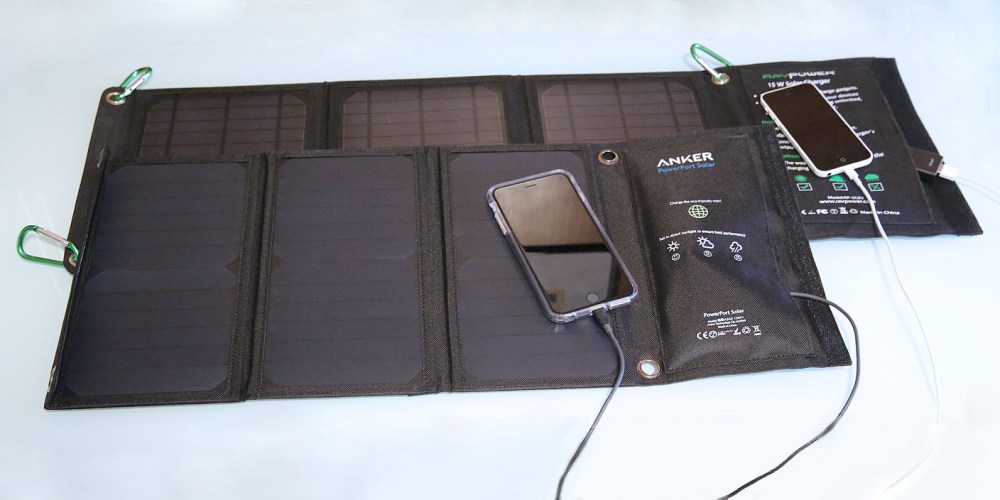 While it’s hard for me to personally endorse any purely solar-powered solution given the realities of the climate I live in, I can understand the appeal of portable solar chargers for two key types of users — backpackers who need a way to keep their devices fueled during extended camping or hiking trips, and people who live in generally sunny climates. If I was picking between these options, I’d likely go with the Anker version based on its superior power output, and pair it with an affordable, high-capacity USB battery rather than keeping my iPhone or iPad attached to it for hours. Anker also makes a 15W version of PowerPort Solar that’s priced the same as RAVPower’s 15W version, if you want to save $5.