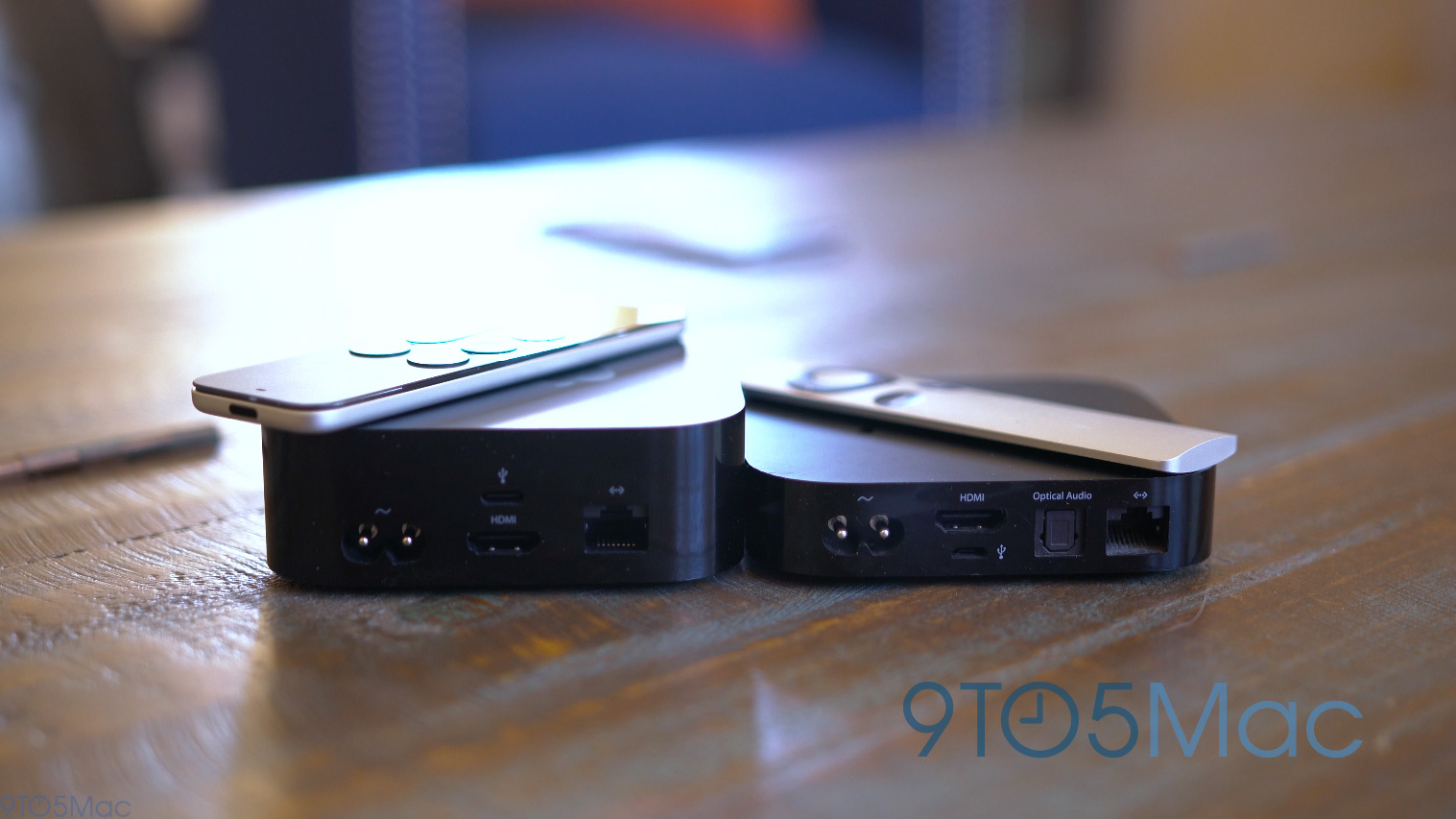 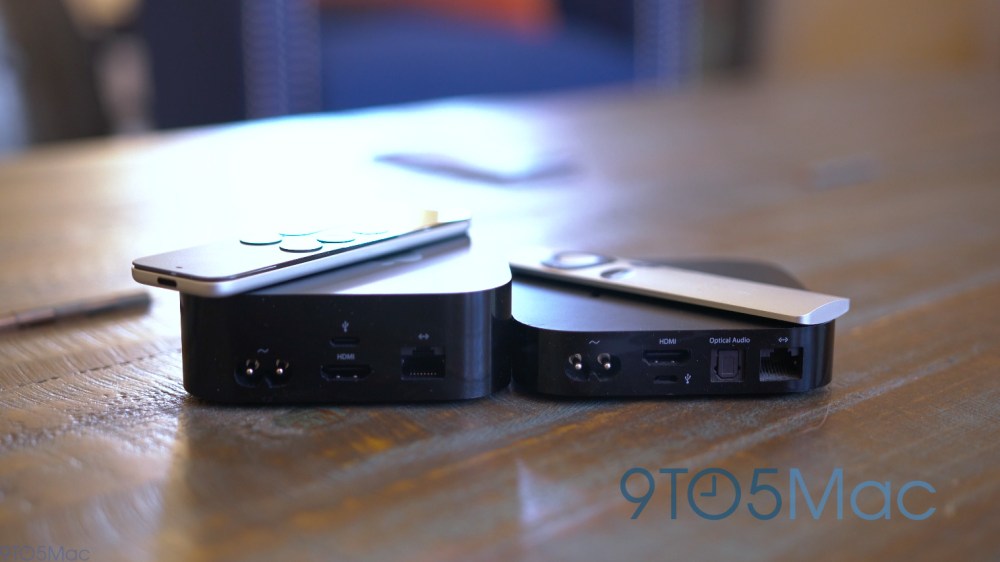 Apple’s fourth-generation Apple TV has been available for two weeks now and after using it using it exclusively for all my media consumption, I’ve gathered a handful of thoughts. When Apple announced the device back in September, I was perhaps more excited for it than I was the iPhone 6s. And rightfully so. Tim Cook touted the new Apple TV as the future of television, using superlatives that seemed extreme even for Apple. The device had been a long time coming, too, which further contributed to the hype in my mind that surrounded the release.

As someone who had incredibly high hopes for the fourth-gen Apple TV, what do I think of it two weeks later? Let’s discuss…

I’ve always been an Apple TV user. Since the device’s essential “relaunch” in 2010, I’ve exclusively used Apple’s streaming offering for my media needs. I’ve tried all of the other boxes too – Amazon’s Fire TV, several Rokus, Android TV, and Chromecast, and while they all do certain things well, I’ve always come back to the Apple TV as I’ve felt it provided the best all-around experience.

Perhaps my favorite feature of Apple TV has been its reliability. Unlike some experiences I’ve had with other recent Apple products (looking at you, CarPlay), Apple TV has always functioned nearly flawlessly for me. I’ve also always loved the simplistic interface. Sure it was due for a new coat of paint, but the interface was easy to navigate in a half-asleep state, trying to quickly get something playing. Unfortunately, both these things – specifically reliability – aren’t nearly as good on the fourth-gen Apple TV, much to my disappointment.

First, let’s talk reliability. I’ll be the first to admit that the issues I mention aren’t 100 percent to blame on Apple, but nevertheless, they approved the apps in the tvOS App Store and hold some responsibility for approving ones that weren’t ready for primetime.

My biggest issue centers around the Netflix app. It’s horribly inconsistent for an app that was always so perfectly reliable on previous-gen Apple TVs. One issue I have more than anything is playback randomly stopping and an error message popping up that informs me a “problem occurred while playing this item.” There’s no offer of a fix, nor any further information as to what went wrong. 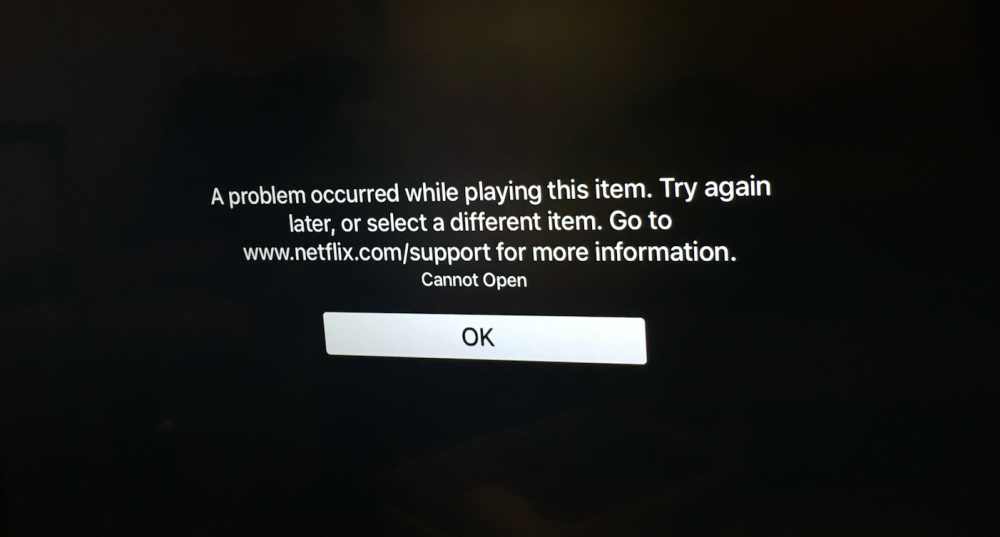 My first guess with issues like this is that it’s related to my WiFi network, so I rebooted everything, Apple TV included, and settled back in to continue my 10th binge watch of The Office. I hit the play button, enjoyed about 45 seconds of the show, only for the error message to appear again. So I force quit the Netflix app and tried again. Same result. Perhaps what’s most annoying is there’s no rhyme or reason as to when the error occurs. Sometimes playback goes interrupted, while other times I can’t go more than 5 minutes without being informed of a problem occurring with the process.

This is the exact opposite experience that I want while using a set-top box. When I sit down to watch Netflix, the last thing I want to do is spend 30 minutes troubleshooting a seemingly unidentifiable problem with playback. Again, this isn’t necessarily all Apple’s fault, but Netflix should have been an app that went through rigorous testing prior to the Apple TV’s launch, as it’s undoubtably the most-used app on the device. It’s important to note that I still have a third-gen Apple TV hooked up in one room of my house and Netflix functions flawlessly on it.

Reliability throughout all apps on Apple TV, first-party and third-party alike, is somewhat nonexistent. Even Apple’s Movies and TV Shows apps are far from perfect. Jumping into the Movies app, for  instance, is smooth. You’re taken right to the Top Movies page which loads up instantly. Scroll to the right to view genres, however, and you’re left playing the waiting game for it to maybe, someday load.

Apple’s statement of the future of TV being apps has never been more true, but they have to be reliable and functioning apps.

The tvOS platform offers a brilliant way for developers to showcase what’s possible, but everything is moot if the apps aren’t reliable, and I have a gut feeling that Apple is to blame for the issues.

Now let’s discuss the interface refresh the fourth-gen Apple TV offers. Zac has already done a great job breaking down the issues associated with the app interfaces on the new Apple TV, so I won’t delve into too much detail here. In most instances, however, I think it’s gorgeous. The overall design is fantastic, although in a dark room (where content is often consumed) a “Dark Mode” would very much be welcomed. Third-party apps are generally well-designed, as well. Asphalt 8, for instance, offers a clean and intuitive way to game. Hulu’s design is also very welcomed, with quick access to genres, new episodes, and recommendations.

Netflix’s app has received somewhat of a negative reaction since its launch in terms of design, but overall, I’m a fan of the interface, reliability issues aside. With large cover art and prevalent summaries, it’s a pleasure to browse through, although quicker access to the My List screen would be very much welcomed.

Can we talk about the new screensavers for a second? They are absolutely beautiful. The images are unbelievably stunning and crisp. It’s this kind of detail that makes Apple products standout from the rest.

If I had one complaint when it comes to the software design of the new Apple TV, it’d be that it’s not as easy to navigate and there’s definitely a steep learning curve when you couple the new interface with the new Siri Remote.

Keyboard support is somehow non-existent. Not Bluetooth, not the Remote.app. Nothing! Your first experience with the new Apple TV is setting it up. As per usual on an Apple device, you have to enter your iCloud login and password like 20 times. Each one feels like you are putting your initials in the high score field of an 80’s arcade game. Then Netflix, HBO, ESPN…on and on. It takes what feels like hours with the Siri remote and that’s no way to be introduced to a product.

Could this have been the plan? Does Apple think Siri remote is that good that you’ll never need a keyboard. Is this a finished product functionality-wise?

Regarding the Siri Remote, it’s leaps and bounds better than the previous remote included with the Apple TV, but that’s not saying much. The touchpad mechanism makes it infinitely faster to navigate through large amounts of content, while the quick access to Siri lends itself to better content discovery as well, but I find myself rarely using it. One change I made, however, is going into the Settings app and changing the “Touchpad Surface Tracking” speed to slow. The default is medium and I found that to be a tad to finicky for my taste. One day, I hope Apple will backlight the Siri Remote as it’s nearly impossible to know which buttons you’re pushing and which way the remote is facing when in a dark room.

Another feature Apple touted when unveiling the Apple TV is its new support for gaming. I’ve never been much more than a casual gamer, but this feature intrigued me. The first game I downloaded was Crossy Road – the hit iOS title that asks you to navigate through obstacles like trees, trains, and rivers. On the Apple TV, it’s even more fun. It’s a great way to pass the time. Playing Crossy Road with the Siri Remote, however, is about as far as the gaming feature can go without the need for a standalone controller. 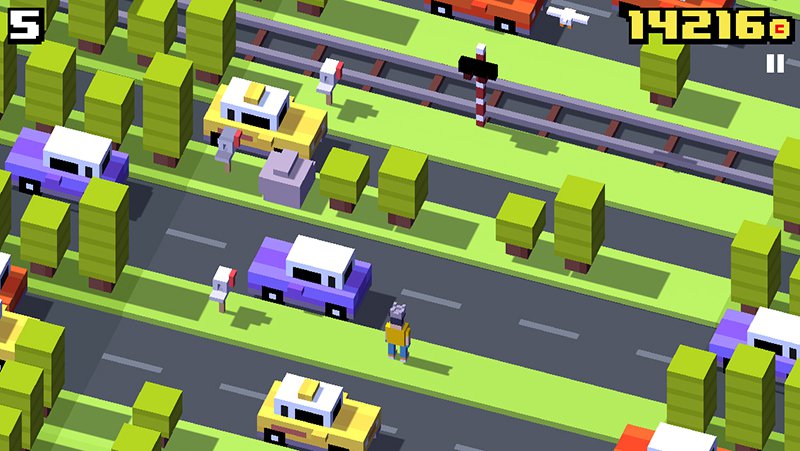 Apple requires that all apps on the Apple TV support the Siri Remote and it’s an odd requirement to say the least. Many games just aren’t very plausible with the Siri Remote. Asphalt 8, for instance, is nearly impossible to play with the remote. Using a game controller, however, significantly improves the experience. The experience playing with the Siri Remote is so negative, in some cases, that developers are getting slammed in reviews with users citing unintuitive controls.

One advantage, and it’s definitely a notable one, is that the new Apple TV supports Apple Music. It’s great to have another way to access the platform, especially if your TV is connected to a nice speaker setup.

This brings me to my next point. If you’re really thinking using the Apple TV as even a remotely serious gaming device, guess again. It’s great for games like Crossy Road, but don’t expect more intensive games to even compare to what the PS4 and Xbox One offer. And you shouldn’t expect them to considering the price point of the Apple TV.

With all of this said, is the fourth-gen Apple TV worthy for an upgrade from a 2nd or 3rd-gen model? You really have to think about what’s actually changed. The two biggest additions are gaming and the Siri Remote, but gaming should not be a reason to run out and purchase an Apple TV. If you already have an Xbox One or PS4 – or even an Xbox 360/PS3 – there’s no need to ever game on the Apple TV. The experience just doesn’t compare.

You also have to consider the lack of future-proofing the Apple TV offers. It doesn’t offer 4k support, which while at this point is not incredibly necessary, it will be sooner rather than later. I had my 3rd-gen Apple TV for three years and I’d like to think that in three years, 4k will be the new standard for video content, and it would certainly be nice if I could keep this Apple TV for three years, too.

We also can’t forget the software bugs that are associated with the new Apple TV, both in third-party apps and Apple’s own apps. Sure these issues will likely improve significantly over time, but in the interim, software issues are the last thing you want on a device that you use when you’re trying to relax.

One thing that will set the new Apple TV apart from the older model, however, is Apple’s cable package. The streaming service is rumored to be launching sometime in 2016 and feature streaming feeds of channels such as ESPN, CBS, and Fox. The package is said to be priced between $30 and $40 and will reportedly require a fourth-gen Apple TV. When this service launches, the new Apple TV becomes a much more compelling device.

Apple still sells the $69 third-generation Apple TV and at this time, it’s a steal compared to the $149/$199 fourth-gen model. If you already have an Apple TV, there’s no need to rush out and buy a fourth-gen model. Yet. If you’re looking to purchase your first Apple TV, however, you have to consider the two biggest non-cosmetic changes between the third and fourth-gen models. Unless those features are crucial to your living room experience, go for the $69 model for now. As software and apps improve, and when 4k is eventually supported, the new Apple TV will be a much more enticing offer than it is now.

Our own Jeremy Horwitz, however, feels pretty different about the new Apple TV than I do…. Read his thoughts here. Also check out Dom’s thoughts & video here.