iPhone 6s Plus vs. Moto X Pure – How does Motorola’s premium phablet compare to the best? [Video] 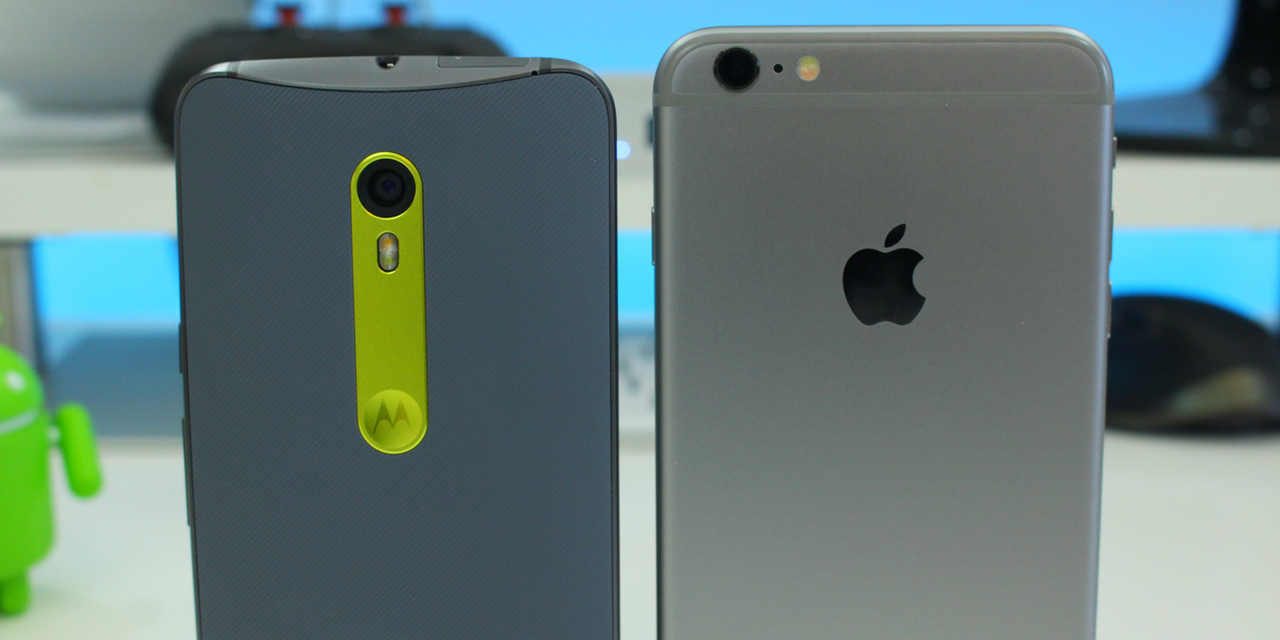 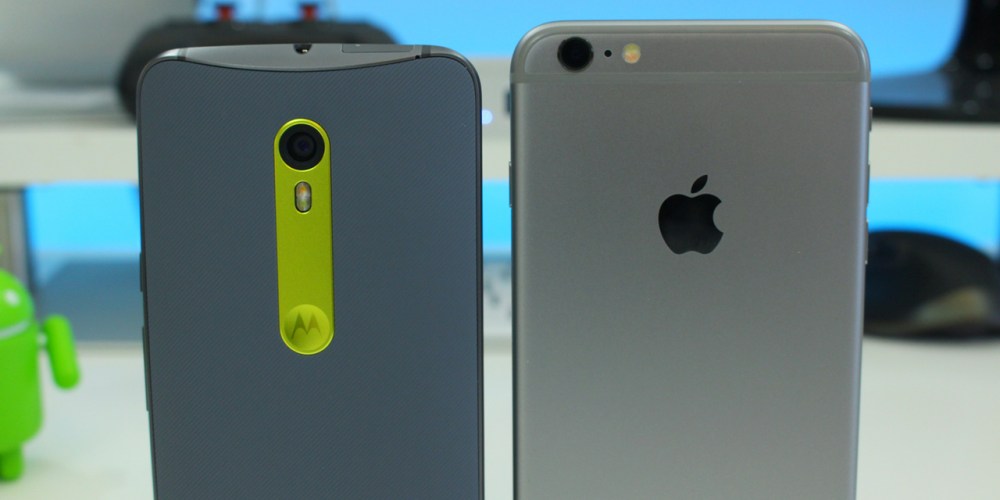 Apple got in to the high-end phablet game for the first time last year. And just a couple of months back, it released its follow up to the 6 Plus just as Motorola turned its Moto X into a giant. Can the X Pure compete with what many consider to be the best phablet around?

Like Apple, Motorola has a big focus on design. Although their focus takes them on a slightly different path, the value for aesthetic appeal is there nonetheless. The metal-framed phone can be customized with a number of different color frames, front panels, metal accents and materials to personalize it before it even arrives at your door. With the iPhone 6s Plus, you have four colors. Only one if you want a black front panel. If you want to add leather, wood or a grippy plastic texture, your option is limited to buying a case.

While Motorola went with a curved back that sits comfortably in your palm, Apple went with a flat, smooth all-metal design. Motorola’s is undoubtedly more ergonomic, but in truth, both phones are big and reaching the corners of either screen is a stretch, even if you have large hands. Of course, if you have the iPhone, you can double tap the Home button and make any content at the top of the screen drop lower, making it far easier to reach.

If there’s one thing the iPhone has going for it, it’s an elegance and finesse. Although I’m not a fan of the antenna bands, there’s something quite luxurious about the way the glass curves perfectly in to the metal chassis, almost creating a seamless experience. Even the protruding camera, Lightning port and machined speaker holes are attractive. And you have to admire Apple’s ability to make really slim devices. At just 7.3mm thin, it’s nearly 4mm thinner than the Moto X Style’s thinnest point.

On the flip side, Apple’s insistence on relatively fat bezels means the iPhone 6s Plus is both taller and wider than the Moto X, that’s despite the fact its screen is 0.2-inches smaller. The Moto X Style has nice, slim bezels and still manages to fit in two stereo front-facing speakers in a front panel that’s 4.3mm shorter than the iPhone’s.

What this means in actual day-to-day life is that the Moto X feels like it belongs in your hand and fits easier in to your pocket, while the iPhone 6s is prettier to look at.

On to displays, and very little separates them. Despite being Quad HD resolution, the 5.7-inch LCD panel on the Motorola almost indistinguishable from the iPhone. Colors and sharpness are pretty much the same on both, despite being different resolutions. The Motorola is maybe slightly cooler, which makes blues pop a little bit more, but there really isn’t anything in it. That’s to say, they’re both very good displays with good viewing angles, color accuracy and detail. Neither offers the saturation, deep blacks or vividness of AMOLED screens, but that’s to be expected from LCD tech.

One piece of tech built in to the iPhone’s screen which isn’t on the Motorola is 3D Touch. In essence, the touch panel knows how hard you’re pressing the screen, and can enable special actions within apps, or direct from app icons on the home screen. Having used them for a little while, it’s very easy to get used to, especially when wanting to send a text message really quickly. I sometimes find myself pressing hard on the Moto X Screen, subconsciously hoping something happens. It never does.

As multimedia experiences go, having a slightly larger screen doesn’t quite make the Moto X Style an easy winner over the iPhone. But what does, is the stereo speakers. As always, Apple’s smartphone has a single loudspeaker placed right on the bottom edge, where your finger or palm will undoubtedly rest when watching movies or gaming. That doesn’t make for an immersive audio experience. Having two speakers blast at your face does, and being stereo means you get a proper feel for how the audio should sound.

As software experiences go, it’s the age old arguments of Android versus iOS. Although currently, the Moto X doesn’t have the latest version of Google’s operating system. It runs Lollipop, although an update to Marshmallow should be coming soon. In most regards, it’s a stock Android experience with a few tweaks. iPhones always run the latest version of iOS, so you get all the new tweaks and tricks offered by iOS 9. If your reason for choosing a phone is based mostly on which platform it runs, the decision is already made for you.

Putting the OS argument aside, both perform like flagships. The iPhone’s powerful dial-core A9 processor powers through most tasks with ease, performing Geekbench tests reveals why too. Its single-core performance is staggeringly high at over 2500 points, while multi-core performance is still 1000 higher than the six-core Snapdragon chip inside the Motorola. In daily use, you probably won’t notice any difference. Both phones are fast and fluid, while the iPhone will load graphically intense content a little faster.

It’s a different story with battery life. The iPhone’s battery may have a lower capacity battery at 2,750mAh (compared to the Moto’s 3,000mAh) but it seems to last longer in daily use. Most days, I can almost get to the end of a second day on a full charge with the iPhone 6s Plus, while the Motorola might get me to 1.5 days. But, if you ever want to charge it, the Motorola does so much quicker. With TurboPower, the Motorola can charge almost 70% of its battery in half an hour. That’s enough to get you through a full day.

Again, like the displays, there’s not much difference in quality of imagery when comparing the Moto X and iPhone. Motorola proudly exclaimed its new camera module is better than the iPhone 6 when it was launched. While that may be the case, it’s not immediately obvious. Both cameras can take great pictures, with good color accuracy and sharpness. Neither is particularly wonderful in low light conditions, and both can shoot 4K resolution video. Motorola’s boasts 21MP vs. the iPhone’s 12MP, meaning pictures are much bigger from the Moto X.

As an overall package, in many ways, both represent what’s best about their respective platforms. The Moto X might not have a fingerprint sensor, or a pressure sensitive display, but everything else about it is superb. As a kicker, the Moto X Pure costs just $399 in the US SIM-free and unlocked for the 16GB model. The same storage on an iPhone 6s Plus will cost you a princely $749. What’s more, you can expand the storage of the Moto X Pure up to an extra 128GB using a MicroSD card. To get that kind of storage an iPhone 6s Plus, you’re paying nearly $1000.

Many an Apple fan will argue that the company’s continued software support, fantastic app ecosystem and customer service are worth paying nearly double for a comparable piece of hardware. I don’t disagree too strongly. If you want an iPhone, you have to pay for it. On the flip-side, if you’re wanting to find out what life’s like on the ‘Dark Side’, it’ll set you back just half of the cost of an iPhone to get a very compelling, fantastic device.