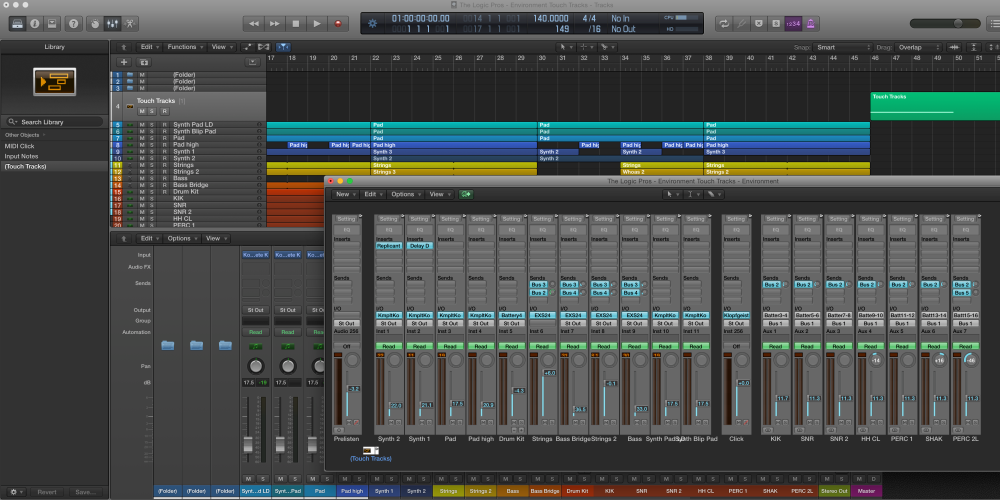 In this week’s episode of The Logic Pros, we will be taking a user-friendly look at Logic’s mysterious and powerful MIDI Environment. Along with what seems like a countless number of possibilities, tools, MIDI FX mods and more, the Environment has an interesting little item known as Touch Tracks that can do some pretty amazing things once it’s set up properly:

The Environment is certainly more for advanced users, and it isn’t recommended to go poking around down here without expecting some wacky things to happen to your input path and with the way Logic starts to behave in general. Having said that, there is a whole plethora of things that can be done: creating alternate MIDI routing paths and other interesting custom MIDI FX using arpeggiators, chord memorizers, virtual sequencer inputs and, well, a whole lot more. For our purposes today we will be looking at the Touch Tracks item.

Touch Tracks is basically a MIDI tool that allows us to trigger MIDI regions in our Logic songs from a typical track on the arrange page. In fact, we can even trigger entire groups of MIDI regions, entire songs we have created, or parts of a song (verse, choruses, etc.). One way of thinking of it might be that it allows us to essentially sample elements of our song without having to create audio files: a single MIDI note can trigger an entire section of a song with an essentially limitless number of individual instruments, for example. This technique can be handy for creating alternate arrangements/chord progressions, experimenting with layered motifs/parts, and even with complex, micro level (right down to granular vertical slices) reorganization techniques found in some electronic music and more.

Like just about anything in the Environment, Touch Tracks can be used in a number of different ways. But for today, we are just going to go over one basic set-up that will allow you to assign just about any combination of MIDI/Audio Instrument tracks to a single MIDI note (or key strike).

1. First we will need to make a few decisions on which portions of our song we want to “sample” or assign to keys on our new Touch Tracks track. For our example, I will choose the intro, verse, and chorus of a song we are working on. Now let’s copy those sections of our song down to the end of the timeline so they are out of they way: Just click and drag your desired regions while holding the option key down to the end of your timeline.

2. Now we need to make scissor edits in order to separate the different sections of our desired regions for our new master Touch Tracks track. Push the T key to bring up to Toolbox and select the Scissors. Highlight the selected regions and use the Scissors tool to create a beginning and end to each section. 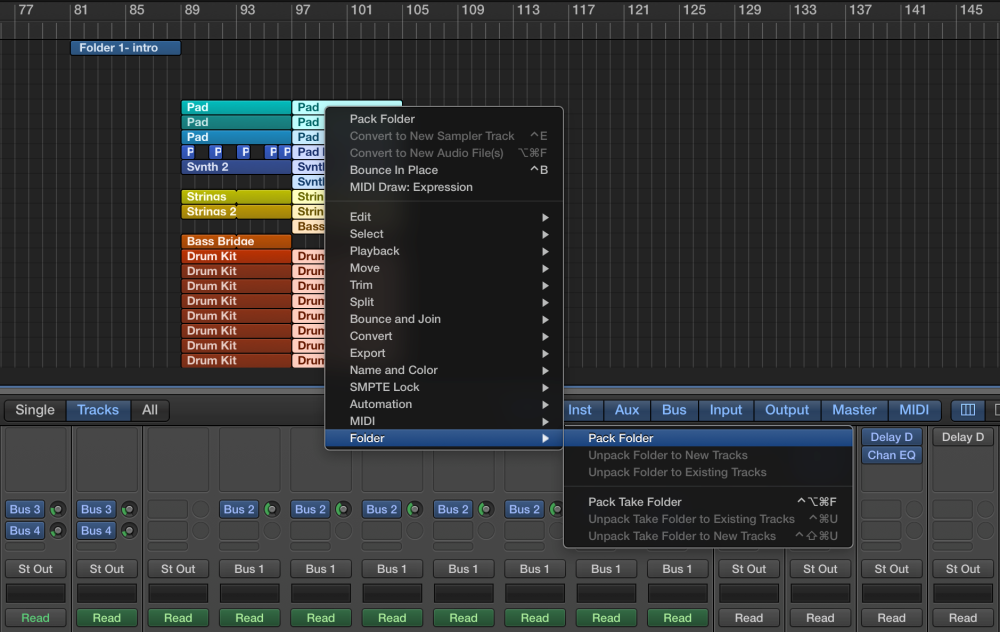 3. If you are only dragging a single MIDI region you can skip this step. For those of us that will be using multi layered MIDI regions on top of each other, we need to Pack them into a Folder first (this is why we made a copy in step 1). Highlight the regions in one of the sections you just defined in step 2. Then hold Control and click one of the selected regions, and choose Folder > Pack Folder from the menu that pops up.

4. Repeat step 3 for each of the sections or portions you want to sample (assign) on your new Touch Tracks track. You’ll want each portion to be packed into separate, individual Folders.

Note: After making your first folder, it can be handy to manually create the next folder tracks by pushing command + D after selecting the one you just made. This way everything stays organized and each section gets its own folder track.

5. Now hit command + 0 (zero) on your keyboard to open the Environment. Go up to the “New” menu option on the top left of the Environment screen, and select Touch Tracks. A small, odd looking object will appear along with an equally odd-looking menu that looks like this:

6. Form here on out, All we need is the above window, Feel free to close the main Environment window. This menu can be thought of as the brains of what will be our new Touch Tracks track. We can manually drag any MIDI region or folder of MIDI regions from our project directly to one of the keys represented by the Piano Roll looking background display.

7. Drag and Drop the folder made in steps 3 and 4 onto keys (the horizontal slot looking things) on the Touch Tracks window.

8. Ok now that we have set up our live “samples”, let’s create a new track on the arranger page. Any kind will do (option + command  + N). Now hold control and click on the newly created track’s header and choose: Reassign Track > Mixer > (Touch Tracks) 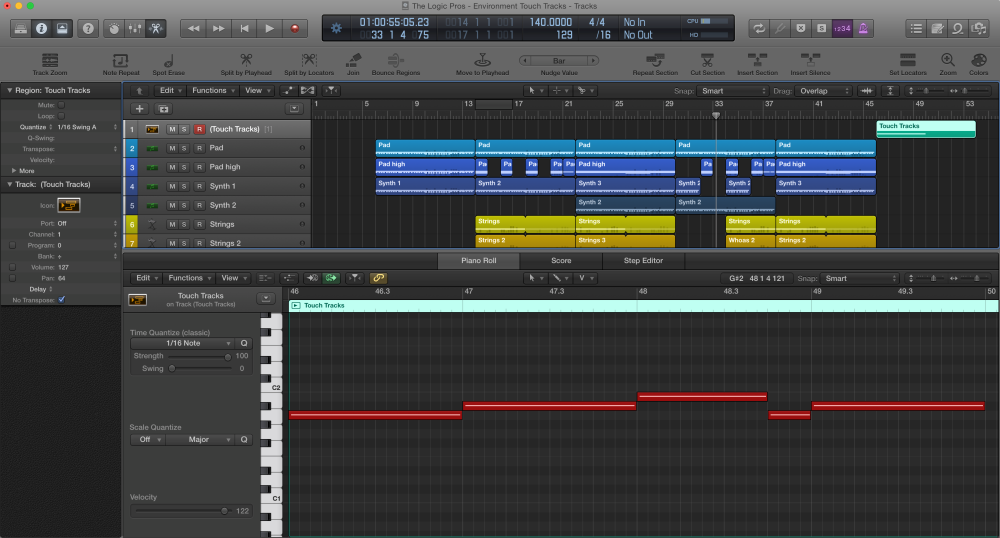 9. OK you’re ready to go! Now simply create a MIDI region on the new Touch Tracks track and MIDI notes corresponding with the note you dragged them to on the Touch Tracks window in steps 3 and 4 will trigger your sections! Remember, Touch Tracks will only trigger when Logic is in Play.

Note: one thing to keep in mind throughout your travels in the Logic Environment: It is not a pretty place in terms of UI and upkeep. It almost seems as though the Logic development team has forgotten about it completely, and that it just remains so legacy users won’t complain (cause we would). Having said that, there are a ton of interesting goodies when you dig deep and it doesn’t have to be all that complex all the time.