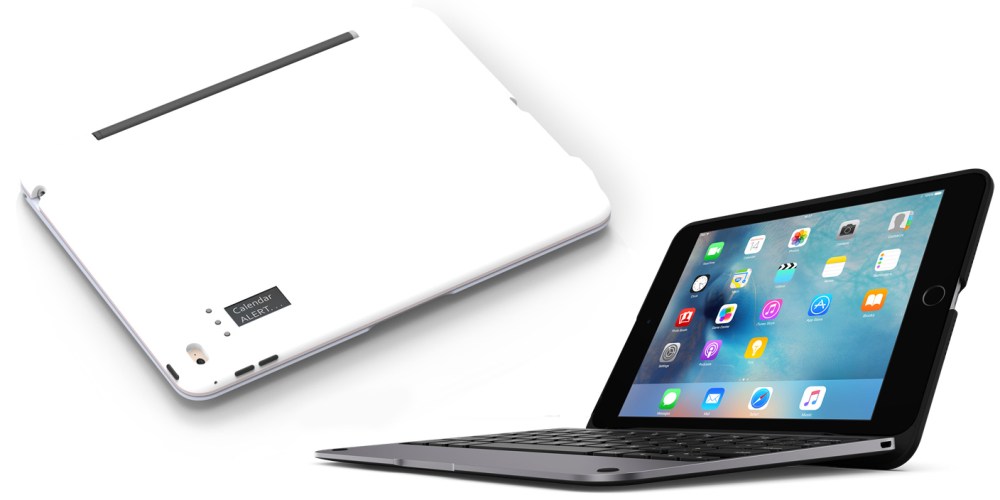 Having acquired Bluetooth keyboard maker ClamCase last year, Incipio today announced five new high-end iPad keyboards under the ClamCase name, including one for the iPad Pro, three for the iPad Air 2, and one for the iPad mini 4. Some of the keyboards feature premium features such as an integrated screen for notifications, a built-in battery pack, and keyboard backlighting. Details and a photo gallery are below…

The lineup begins with ClamCase+ for iPad Pro ($170) and iPad Air 2 ($150), each promising a backlit, full QWERTY keyboard inside a gray, silver, or gold housing, using Incipio’s 360-degree hinge to attach to each iPad. Interestingly, the iPad Pro version will include an Apple Pencil storage slot, and both versions will let you adjust keyboard backlight brightness. Both versions of ClamCase+ are expected in the second quarter of this year.

ClamCase Prompt for iPad Air 2 ($200) is unique in combining a Bluetooth keyboard with a built-in rear OLED screen, enabling users to receive notifications while the keyboard is covering the iPad’s screen. Incipio explains that it offers a “non-disruptive way to receive smartphone notifications during meetings, study sessions, and more;” it will be released in a white/silver version in the second quarter of 2016.

ClamCase+ Power for iPad Air 2 ($200) combines a black, backlit Bluetooth keyboard with a 6000mAh, 2.1-Amp battery that can recharge the connected iPad or another device; a micro-USB port recharges the keyboard and backup battery at the same time.

Last and least interesting is ClamCase Pro for iPad mini 4 ($130), which attaches to the latest mini using the company’s 360-degree hinge. It features Bluetooth 3 for quick, one-touch pairing; no mention is made of keyboard backlighting. It will debut in gray or silver/white in the first quarter of this year.