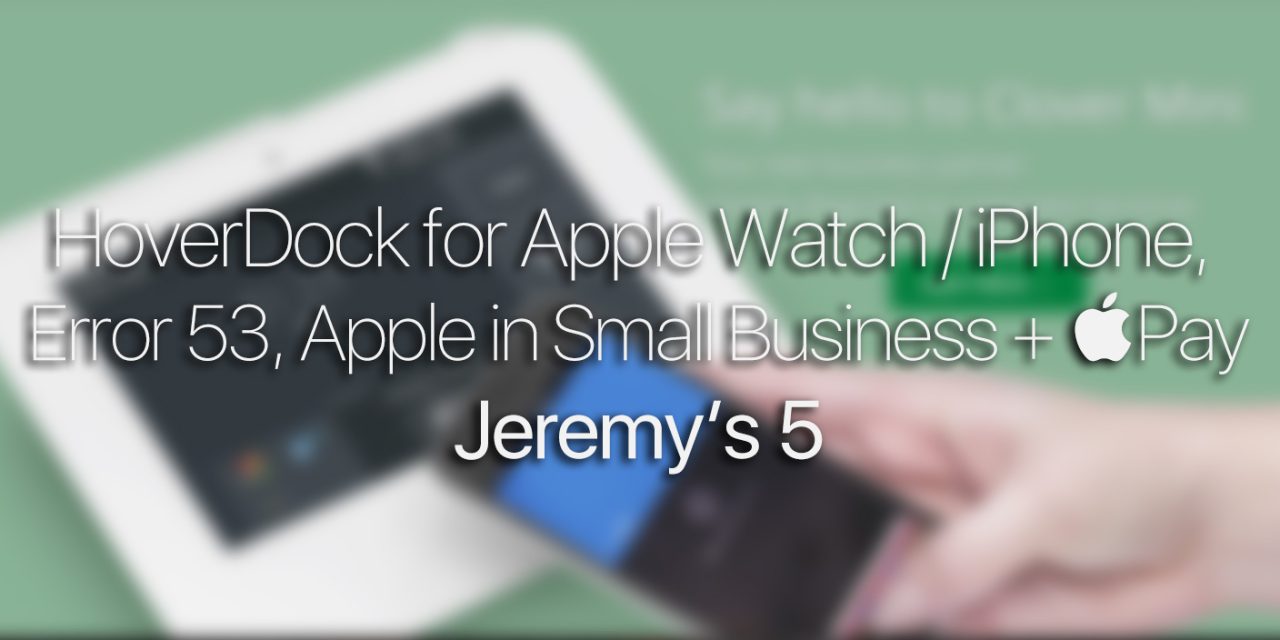 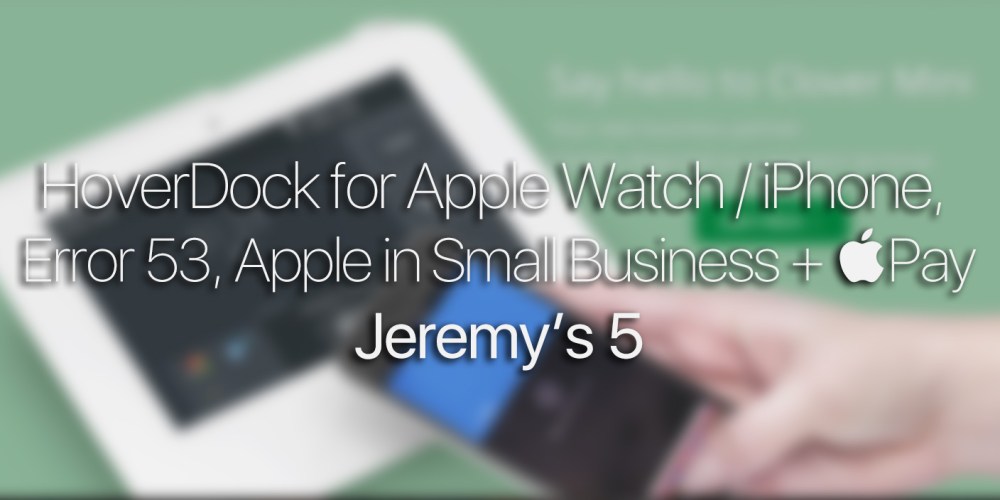 Welcome to the latest edition of Jeremy’s 5, my latest roundup of 5 interesting little things that aren’t big enough for full articles, but are still worth sharing with you. 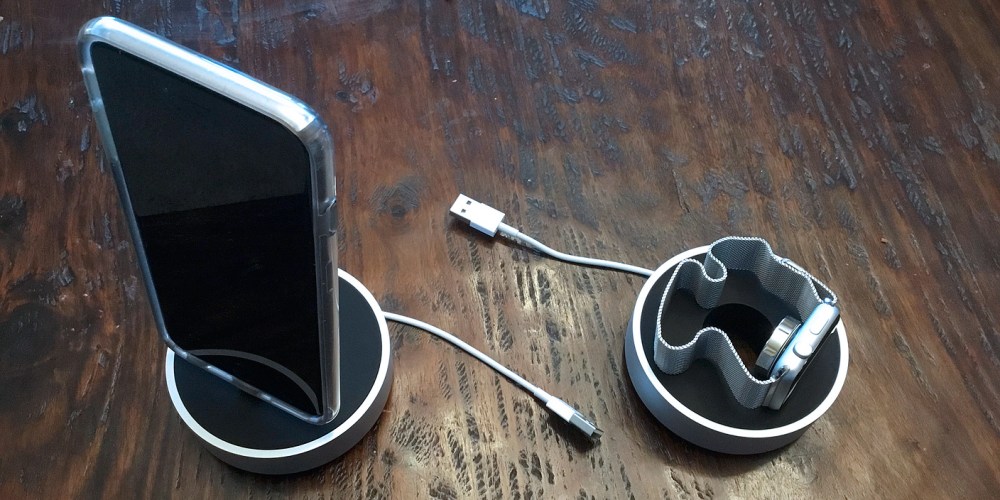 HoverDock scores some points for elegance, as the aluminum and plastic puck is sexier and more compact than Apple’s official Apple Watch Magnetic Charging Dock, using better materials at a lower price. It also achieves the same goals, mounting your Watch in a Nightstand Mode-friendly orientation modestly above any flat surface. Finally, it makes charging cable management as easy as spinning the plastic core inside the aluminum frame. I personally prefer the heavier weight and look of TimeStand, but if you want to save a few bucks and have a dedicated base for Nightstand Mode, HoverDock’s a nice alternative. People with long charging cables and/or plans to travel may well find it to be Just Mobile’s best solution. 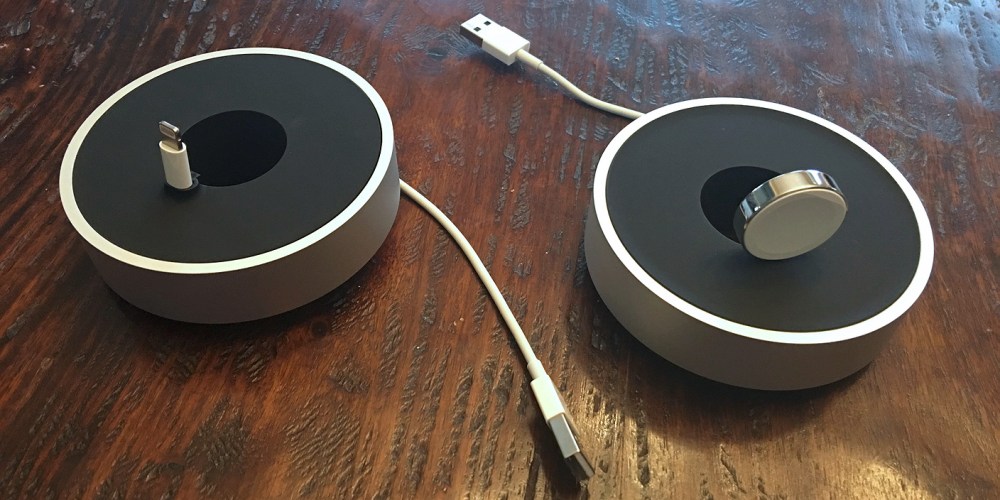 2. Just Mobile’s HoverDock for iPhone. Virtually identical to the Apple Watch version, the $35 HoverDock for iPhone also works with the iPod touch and iPad mini. You still have to self-supply an official Apple cable — here, Lightning — but unlike Apple’s official iPhone docks, HoverDock includes an adjustable plug insert to tailor the Lightning connector’s height to your bare or encased iPhone. It feels a bit light in weight, but the minimalist design and cable management will certainly appeal to some iPhone users.

3. Error 53 and Me. Remember when I mentioned the mysterious iOS Error 53 in a December edition of this column? Just over one month later, Apple has started to acknowledge that Touch ID-related issues can, as I said, completely brick your device when you attempt to upgrade iOS to a new version. In short, if your Touch ID sensor fails for any reason and you try to use iTunes to update iOS, your device will — without warning — fail mid-way through the update process and be rendered unusable. Following a report in The Guardian, an Apple spokesperson said that affected users should “contact Apple support.” I did so for my wife’s iPhone 6 back in December, and was required to spend out-of-pocket cash to replace the device. It appears that The Guardian is agitating for a class-action lawsuit to be filed on behalf of affected iPhone users; to avoid that mess, Apple should really make repairs free and refund those of us who paid to replace Error 53-crippled iPhones.

4. Apple In The Small Business. If you haven’t seen my Twitter account, you mightn’t know that I’ve spent the last month deeply immersed in opening a restaurant, including (amongst many other things) the ground-up building of its digital infrastructure. Not surprisingly, we’re using as much Apple hardware as possible: our office is filled with MacBook Pros and iPhones, all tied together using AirPort Extreme wireless hardware and common apps. My goal has also been to use as much Apple software as possible, eschewing Microsoft Office for Apple’s iWork suite, completing (numerous) forms with OS X Preview, and powering our audio system with iTunes (and, believe it or not, AirPlay speakers).

By and large, I’ve been thrilled with how all of the pieces work individually and together — despite a growing chorus that Apple’s days of “just works” hardware and software may have passed, all of our Apple gear does in fact work 95% of the time. The problems we’ve had are largely on the fringes: one of us has a recently AT&T-refurbished iPhone 5s that never worked quite right, another (me) has an iPad Pro that rarely gets used due to a lack of compelling software, and none of us has yet found good uses for several spare iPads, iPad minis, and an Apple Watch we’d expected to use in the business.

The latter point is surprising for a couple of reasons. First, we had fully anticipated using an iPad-powered point-of-sale (POS) system, but after exploring our options, we concluded that First Data’s hugely impressive, Android-based Clover system was a much better (and more reasonably priced) option than any of the iPad POS software and hardware solutions we examined. Clover looks and feels like an Apple product in every way, is easy to set up, has its own app store, and supports Apple Pay.

Second, although iPads have numerous applications within a restaurant, we will barely use them for their highest purpose (as little computers); instead, most will wind up as limited-use wine menus or something of the sort. Similarly, though I can think of ways a fleet of Apple Watches would be handy, such as coordinating staff using discreet taps on the wrist, sluggish watchOS apps and the inability of iOS/OS X devices to easily trigger Digital Touch features such as Taptic feedback limit the platform’s potential. I’m ready to use more Apple gear in our business, but without the right apps, the added investment is hard to justify.

5. Apple Pay. Apple’s Maps Connect system lets businesses manage their listings on Apple Maps — and now it’s also helping to build support and awareness for Apple Pay. When I went to update our listing on Apple Maps this week, I was offered the opportunity to tag our business within the Maps app as accepting Apple Pay, and if so, to get free decals from Apple to promote Apple Pay on our windows and payment terminals.

I was personally very enthusiastic to accept Apple Pay — we ironically chose those Android-based Clover terminals over iPad payment solutions because Clover includes Apple Pay and EMV support; other POS systems are seriously lagging behind. It seems like a no-brainer that Apple will introduce its own payment terminals, if not a complete point of sale solution, to support Apple Pay at some point in the not-too-distant future. Jony Ive’s mid-2015 shift to Chief Design Officer was said to free him to focus on redesigning Apple’s retail stores, and it would make a lot of sense that he’d be involved in crafting an elegant payment platform to replace the clunky terminals currently carried around by sales associates. I’d expect that such a platform would appear in Apple Stores and a handful of Fortune 500 retailers before trickling down to “the rest of us,” assuming it was designed to be affordable enough to compete with Clover, which it might or mightn’t be.