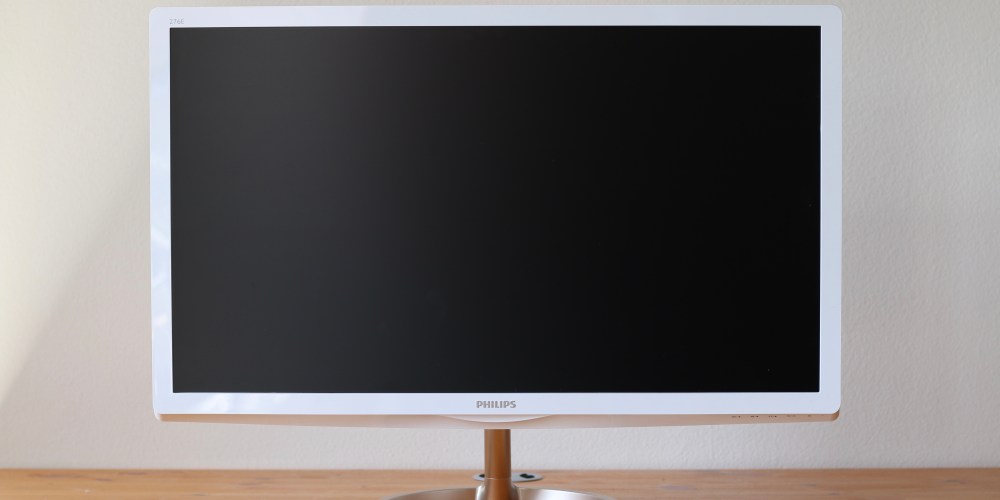 I had never heard of quantum dot display technology until Philips announced their new E6 monitor. Touting to be the world’s first quantum dot display monitor and the only one to reach 99% AdobeRGB color, I definitely became interested. I was already on the hunt for a high-quality monitor, so this seemed like the perfect opportunity.

The annoyance I had in monitor shopping was looking for one that was both large and featured an overall great color profile. On every monitor I ever have, I tweak and calibrate my color settings until I achieve just the right balance. So this Philips monitor sizing in at 27-inches seemed like a perfect candidate to test into my color calibrating world.

The first thing I noticed when I pulled the monitor out of the box was the overall construction of it. I was very happy to see that Philips had built on a metal base and stand for the monitor, instead of opting for a simplistic plastic one. In doing so, the base feels sturdy and well balanced compared to other monitors I’ve used in the past. The metal base is coated with a light gold color, closely matching the iPhone’s gold anodization. My favorite little detail when setting up this monitor for the first time was that Philips included a base that connects to its stand using a screw which can be tightened either with a Phillips screwdriver or by hand. The screw has a small ring-like piece that flips up making tightening it easy. 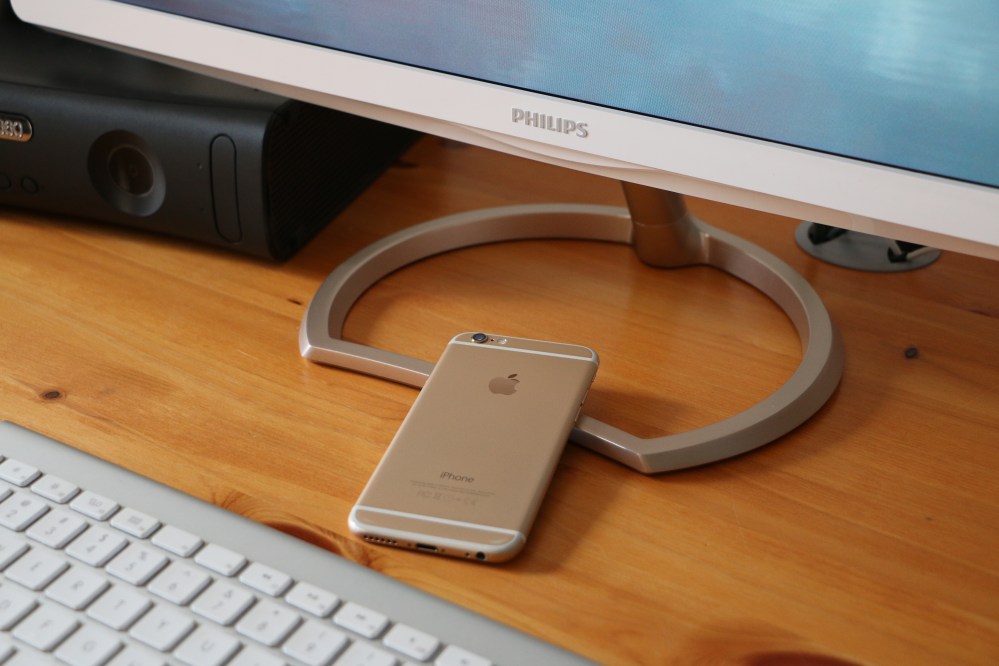 As it turns out, this metal stand introduces one down-side. The monitor can’t be mounted using traditional methods. The metal base itself can be removed and added, but it’s stand cannot. The stand is built directly into the monitor, blocking any mount options.

The display itself is made out of a white plastic construction. Normally in any other color, this type of plastic would attract a lot of fingerprints, but its clean white sheen neatly hides those. Even at a large 27-inches with a metal base, the monitor feels very lightweight and easily moveable.

At the back of the monitor, there are 3 video inputs (MHL-HDMI, DVI, and VGA)  and a single HDMI audio output. Philips also opted to use two shiny metal screws on the back of the display. Presumably, they’re there to mount the video input board internally. While it makes sense, these two screws really stand out compared to the rest of the design of the monitor. Luckily that’s not something that anyone would spend much time looking at.

This monitor does include one of my major annoyances with modern TV and display technology: touch responsive buttons on otherwise physically oriented devices. This Philips monitor includes touch responsive buttons under the front panel. While I appreciate the simplicity in cutting out mechanical components for simplicity’s sake, including it underneath the front panel (where you can’t even see the icons they correspond to) makes it nearly impossible to use properly on the first try. Multiple times I would accidentally tap the wrong button while searching for another.

A small improvement that would make the biggest difference would be to have physical tick-like marks over the buttons so a user could “feel” the buttons before being touched. The amount of time from when I press the wrong button to when the monitor’s OSD is shown is so large that I usually press the wrong buttons a few times just to try and back out of whatever I’ve done.

WHAT ARE “QUANTUM DOTS”?

My first step before powering on the display was to understand exactly what “Quantum Dots” were. I figured the name was a marketing or brand name, but little did I know that it was actually something that has been around for a while.

Quantum Dots are a tiny light emitting nanocrystals engineered to produce pure light in any color. It means that display tech can achieve higher quality imagery more “true” to its color, without raising prices in the tech to absurd amounts. It won’t match OLED’s display clarity, but it may just take display tech one step forward in the meantime.

During my day-to-day testing, I had used a VGA connection with the monitor, instead of HDMI. I had wondered the merits of VGA versus HDMI, but after some research it seemed like if there was a difference it would be negligible. From the moment I turned the monitor on I knew I wanted to watch all my favorite videos on it. The clear and bright display, and I do mean bright, was attractively vivid. I wanted to push its visual limits and watch all the videos I could muster, and play all the games I desired. 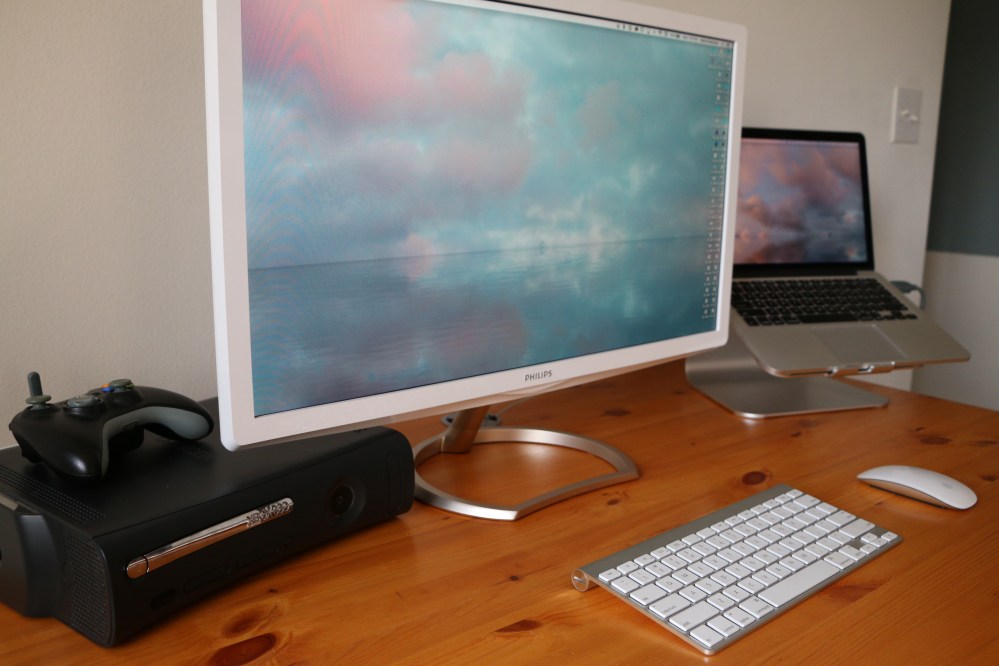 Out of the box, I noticed the display presented everything clear and sharp. There were no corners that seemed too dark, or under-lit. A few minutes after that, I began wishing the display had a higher resolution. 1920 x 1080 feels limiting on a screen this large. A higher resolution would make the visual real estate feel less wasted on a display this physically large.

I did notice upon further testing that on the display there was a sort of weird orange hue seen everywhere. Comparing the color profiles from my MacBook Pro to the Philips monitor, I could tell that the monitor treated some blue and white areas with a strong yellow-orange hue. After I calibrated my monitor using Philips’ recommended settings, that hue seemed to subside further, but still remained.

Editing photos on this monitor were amazing. I recently switched back to an older Mid–2010 MacBook Pro from a Retina display, so I had begun to miss the Retina’s display quality. This monitor doesn’t achieve the Retina’s pixel density but significantly makes up for it in displayed color. The glossiness of a Retina display MacBook Pro can sometimes alter the perceived colors when editing photos, but this Philips monitor didn’t seem to run into that problem. I edited some photos taken directly out of my girlfriend’s Rebel T1i, and the display quickly made apparent where I had gotten my color and lighting off.

Video games on here were beautiful too. I was immediately impressed at the color neutrality in the imagery. Ignoring the original orange hue problem discussed above, enemies and maps in games seemed to almost be painted onto the screen. This was a stark visual comparison to where I normally play on, my living room LCD TV. That TV has been calibrated multiple times, but no matter what I do, there is always a problem where some games’ dark scenes are TOO dark and the game becomes extremely hard to see and play.

After using the monitor for a few weeks, I did start noticing some image retention issues along where Safari and Chrome’s URL bar were. The monitor was used as my primary display, and I frequently had different apps switching and moving around, so I wasn’t sure why image retention was occurring. After letting a few videos play on that display for about an hour, the issue went away.

I reached out to Philips in regards to this, but I believe my issue may be more associated with the fact that this monitor may have been a pre-production model.

Overall, I was extremely impressed with this monitor’s color neutrality. There was never a point where I felt one color in the spectrum stood out stronger than the rest. Though I’m not a professional photo editor or video editor, this monitor hits the nail on the head of everything I’ve wanted in a large scale monitor. I’m excited to see what Philips does in the future with any other Quantum Dot monitors they may release. (A video review is coming soon.)

The Philips 276E6ADSS monitor is now available for sale at $299 from Amazon.