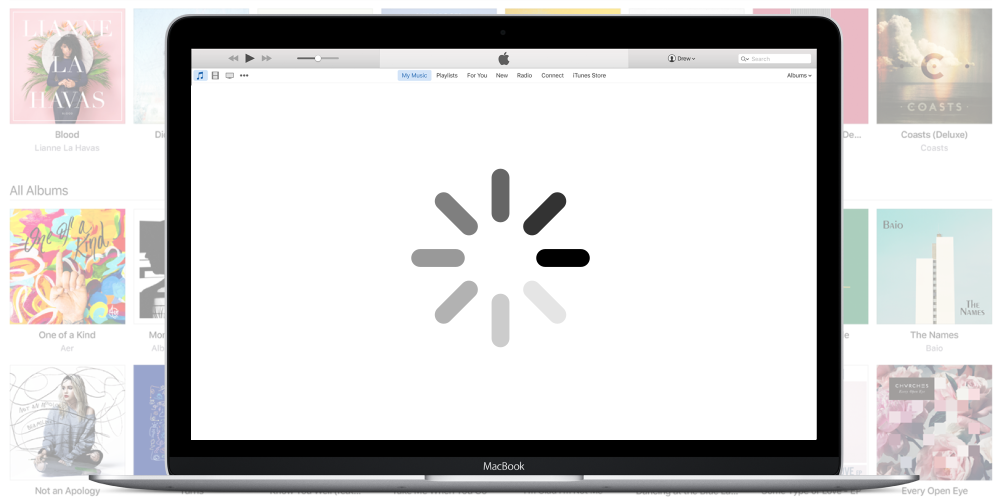 All the excitement for this week’s Apple announcement for the new iPhone SE, 9.7-inch iPad Pro, and refreshed Apple Watch models has got me on the edge of my seat. Not just for the hardware, but also for the potential iTunes software changes that might be coming. Eddy Cue dropped the hint during an interview last month, saying that iTunes would be receiving a refresh this month focusing on music with the new version of Mac OS X. That’s great news, because a refresh is undeniably what iTunes needs right now.

During the interview blogger John Gruber sat down for an hour long conversation with Apple execs Eddy Cue and Craig Federighi. I previously broke down the interview where the group discussed the current state of Apple products and where they recognize areas for improvement. In the entire discussion, the part that sticks with me still is how Eddy Cue had made a passing statement of an incoming “refresh” for iTunes coming this month. Exactly what Cue meant by a “refresh” is the question I keep coming back to, and something I believe may be alluding to more than he let on.

In the conversation with the execs, both acknowledged difficulties with various parts of their platforms. They both agreed that there were areas where Apple could definitely improve and that they were constantly thinking about what they could do to improve them. The difficulties with iTunes brought up how it related with the still new Apple Music. A confusion between the different services and systems was starting to form.

Cue explained that at one point they even thought of making the entire system “cloud based” since Apple Music and iTunes for all intents and purposes already were cloud based. They acknowledged that iTunes had been built during a time when everything was being synced with a cable. A centralized place for syncing activities was key. Not having to launch multiple apps to manage a device was and is important for Apple.

The idea of a cloud-based system was soon scrapped when they recognized that they still needed a way to allow users to have the ability to upload music easily. Especially when millions of devices are still manually syncing to iTunes using a cable. They didn’t want to push all of Apple Music and iTunes into a cloud platform when users still had to manage personal libraries. Not all of the other competing music streaming services offer a way to upload music already owned to the cloud, and Apple wanted to retain that.

Cue stated that for the short term, they wanted to focus so that when you were in Music in iTunes, all you saw was music. He believes that if they had built a separate Music syncing application, it would look a lot like the current Music section of iTunes. This part of the conversation is where my ears began to perk up. Cue says, “Right now we think we designed iTunes, with a refresh coming in OS X next month, that makes it even easier to use in the Music space.”

And this is where we get to the crux of our conversation. What would happen to Apple’s Music services and sections within iTunes that could simplify it? Taking a look at iTunes’ Music section today, it’s immediately apparent how overly complicated the UI has become. 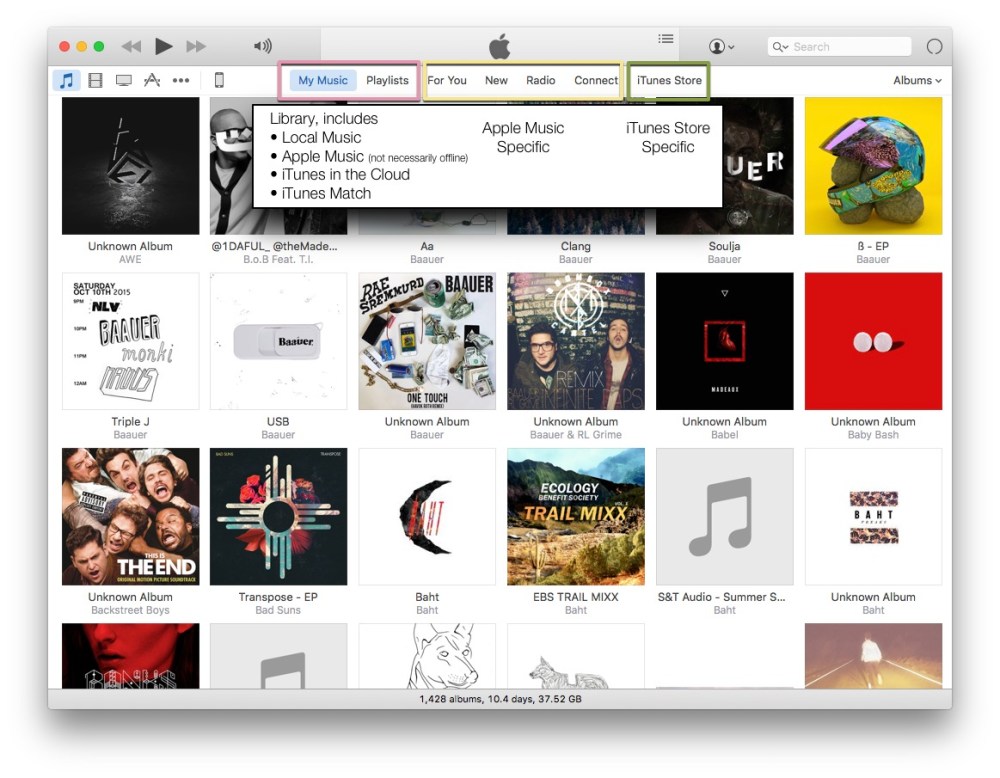 The primary iTunes Music sub-sections, and what services and systems they correspond to.

While there are multiple discussions to start iTunes from scratch, I want to hone in on the one area where I feel iTunes really needs a “refresh”: the music section’s toolbar at the top of iTunes. As of iTunes 12, there are 7 different music sub-sections in the toolbar. Two are library specific, four dedicated to Apple Music, and one for the traditional iTunes Store.

The first group of options in this section alone are already overly messy. ‘My Music’ and ‘Playlists’ both contain various types of music libraries. Under either of these, users can see music from their local on-disk library, music from Apple Music, music from iTunes in the Cloud, or even music from iTunes Match. The only way to tell and understand what is what is to enable the ‘iCloud Download’ and ’iCloud Status’ columns. Apple even created a support document specifically to help understand these icons and statuses.

The second group of options includes four options, all Apple Music specific. While these may be obvious to those who frequently launch Music on iOS, to a new iTunes user it’s not exactly the friendliest introduction to Apple Music. If a user currently doesn’t have Apple Music and clicks on these sections, they are shown a page to purchase it. It makes financial and marketing sense to do this, but it is most definitely not a good way to onboard new potential users.

The final option is just the iTunes Store. This is probably the clearest section of all. Users know when they click here they’ll be taken to see the iTunes’ catalog. Except even that catalog is becoming a massive amalgamation. Under iTunes someone can find music, movies, TV shows, iOS apps, books, podcasts, audiobooks, and iTunes U content.

Click through the gallery above to see how iTunes handles each search function depending under what section the user is under.

From these varying sections, how would a user quickly jump in and make an immediate purchase? Depending on what selection the user made in any of top three subsections, they’ll see different results and options for each view.

iTunes has quickly outgrown itself and is struggling to keep all its services together and organized cleanly. I appreciate having options and control, but I don’t at all enjoy having to think for longer than a few seconds of where I should go to purchase something.

Oversimplifying the solution, Apple could re-implement iTunes into a way that detects what services the user currently has. Are they Apple Music subscriber? Show the Apple Music section. Are they searching for music, subscribe to Apple Music, and the music isn’t available on Apple Music? Show results indicating as such, and point them to iTunes where they’ll be able to purchase the music.

I’ve done it multiple times. Searched for content on Apple Music, only to discover it doesn’t exist, and then having to re-do the search under the iTunes Store subsection. This bouncing around and having to think of where my searches are run just doesn’t coincide with Apple’s market cohesiveness. 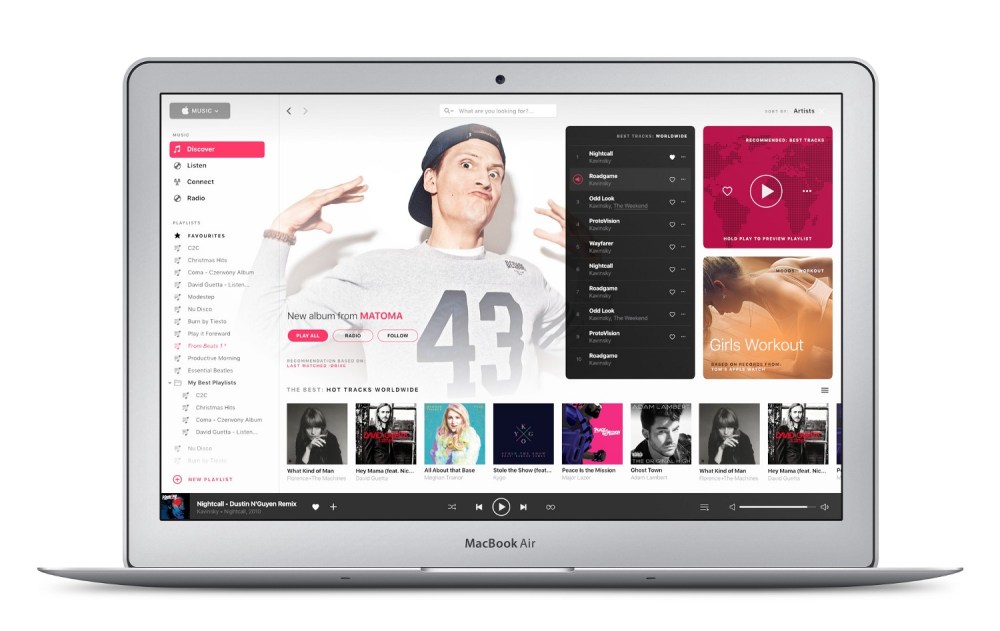 Dribbble is full of UI redesigns, but I haven’t seen one that handles all the disorganization of iTunes well. Tom Koszyk’s Apple Music experience redesign goes through nearly all of my gripes and designs the interface in a way that drives discovery. I believe it’s time that Apple gives iTunes’ music sections an experience refresh, and I’m hoping that’s exactly what Eddy Cue had meant.

What about you? What do you think about Cue’s “refresh” comment? Do you think it will greatly improve iTunes, or simply add another bandage onto existing features. What features do you feel iTunes needs added or removed? Comment below, or let me know @gregbarbosa.