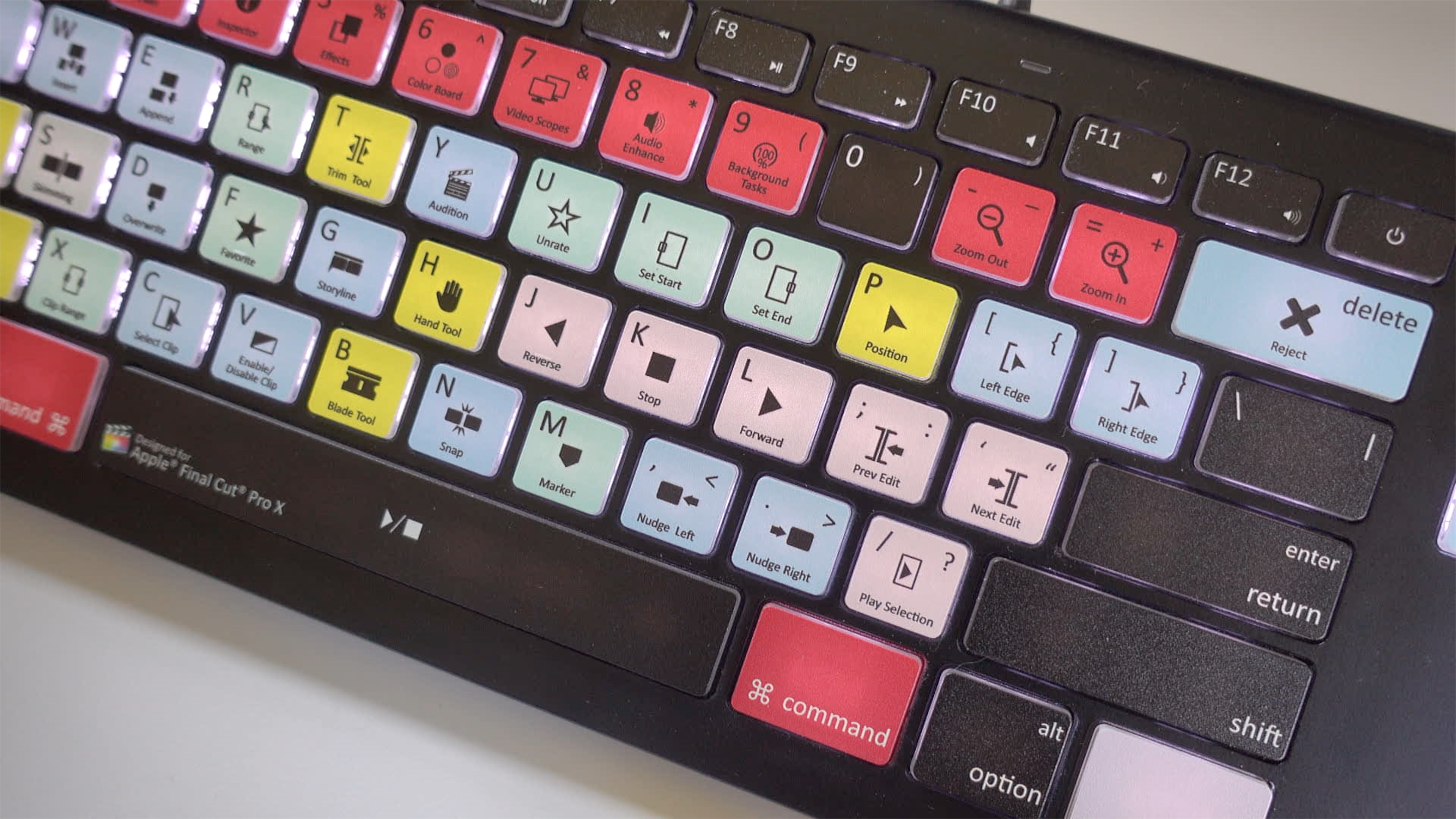 I’ve been using Final Cut Pro X on a regular basis since it debuted back in June of 2011. With five years under my belt, I feel pretty comfortable navigating around the interface, utilizing custom keyboard shortcuts, and all of the other benefits that come with being intimately familiar with a piece of software.

If you’ve read any of my previous posts about Final Cut Pro X, you’ve probably concluded that I have a strong affinity for the app, despite some of the hate that it receives.

I’m also someone who likes to recommend Final Cut Pro X to new editors. I think that it’s easier to grasp and much more friendlier to work with on a Mac than competing apps like Adobe Premiere Pro.

So when EditorsKeys, a company that produces a keyboard specifically designed for Final Cut Pro X, asked me to do a review, I was intrigued.

The keyboard itself is a hard-wired black plastic keyboard with backlit keys. Being designed specifically for Final Cut Pro X, it features all of the Apple-centric keys that you would expect. It’s a full-sized keyboard as well, with the full gamut of function keys and a numeric pad.

After using the keyboard for just a few minutes, I felt totally comfortable touch typing. The key travel on this keyboard feels great, but keep in mind that I’m a full-time 12″ MacBook user, so that may be skewing my opinion just slightly.

The key caps themselves have a semi-textured feel due to the custom printing on each key. The texture can be described as a slightly tacky feeling, almost like newly dried acrylic paint, but it feels pleasing to type on. I haven’t used the keyboard long enough to determine if the texture will alter over time, but I imagine that the keys will get smoother with continued usage.

Although the keyboard works on both Windows and Mac, you will need to download a companion app to get correct positioning of Control (⌃), Option (⌥) and Command (⌘) keys and full access to the FN-key Mac shortcuts.

The headlining feature of this keyboard, as with all of the keyboards in EditorsKeys’ lineup, is its printed backlit keys. This particular keyboard is designed with Final Cut Pro X in mind, and as such, features tons of stock Final Cut Pro X shortcuts printed on its key caps.

Because each key features transparent side housing with nothing printed there, the backlight bleeds through the sides of the keys. This may prove to be a distraction for some users, because there’s a significant amount of bleed when looking at the keyboard from an angle. 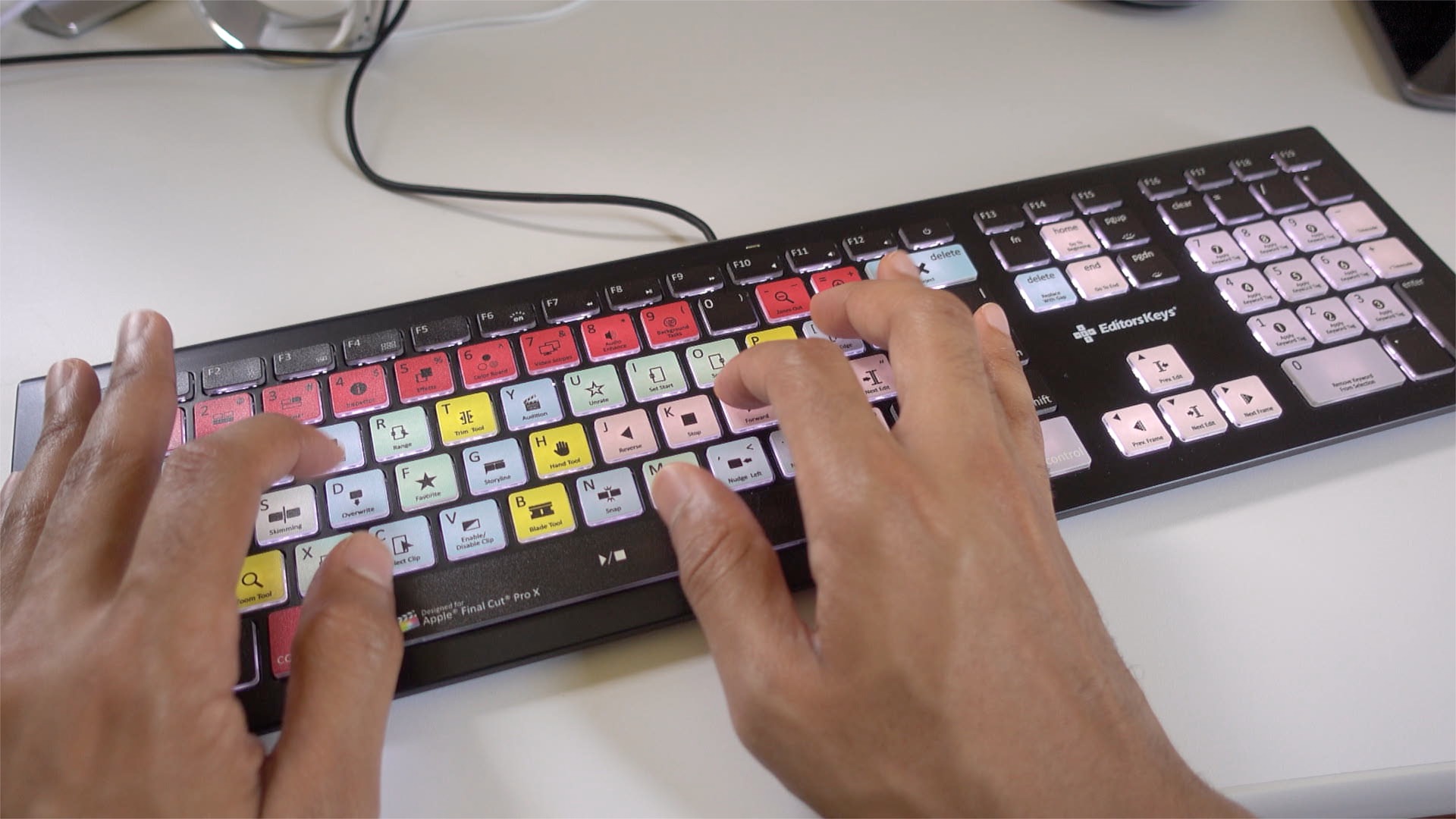 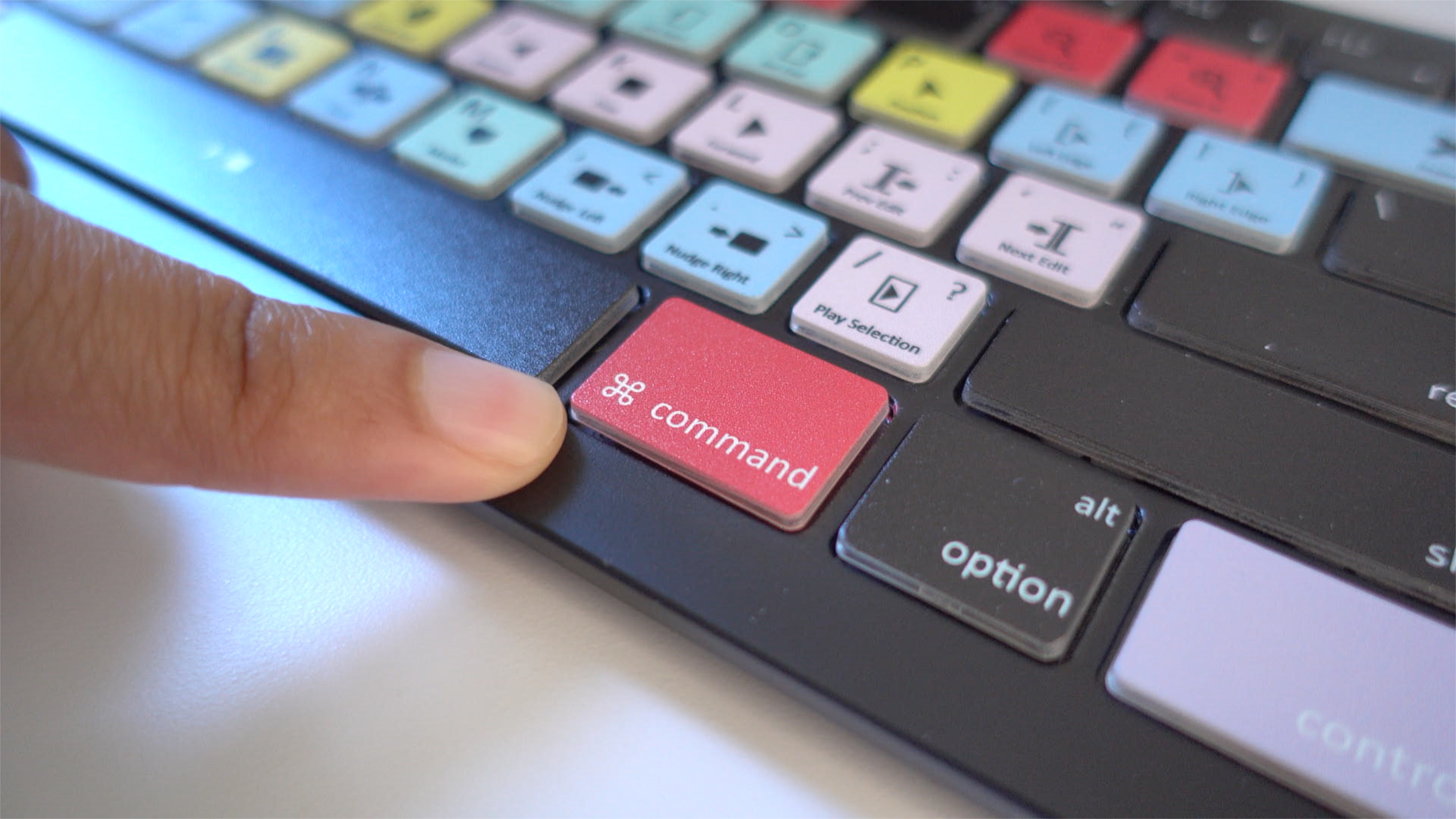 Every key on EditorsKeys’ keyboard is backlit with a three stage LED. The backlight can be toggled via a dedicated on/off button in the FN-key row, and can be adjusted via dedicated brightness keys above the arrow keys.

If you’re a seasoned Final Cut Pro X vet, then chances are you’ve already modified the keyboard shortcuts to some degree. Even if you do use most of Apple’s stock shortcuts, it’s likely that you know many of the pertinent ones by heart. For me, most of the keyboard shortcuts are engrained in my muscle memory, and I rarely look down at my keyboard to find them.

But if you’re relatively new to Final Cut Pro X, or you’re literally just getting started, I can see how such a tool might help to get over the initial hump. This is especially true if you’re completely new to the world of video editing in general. 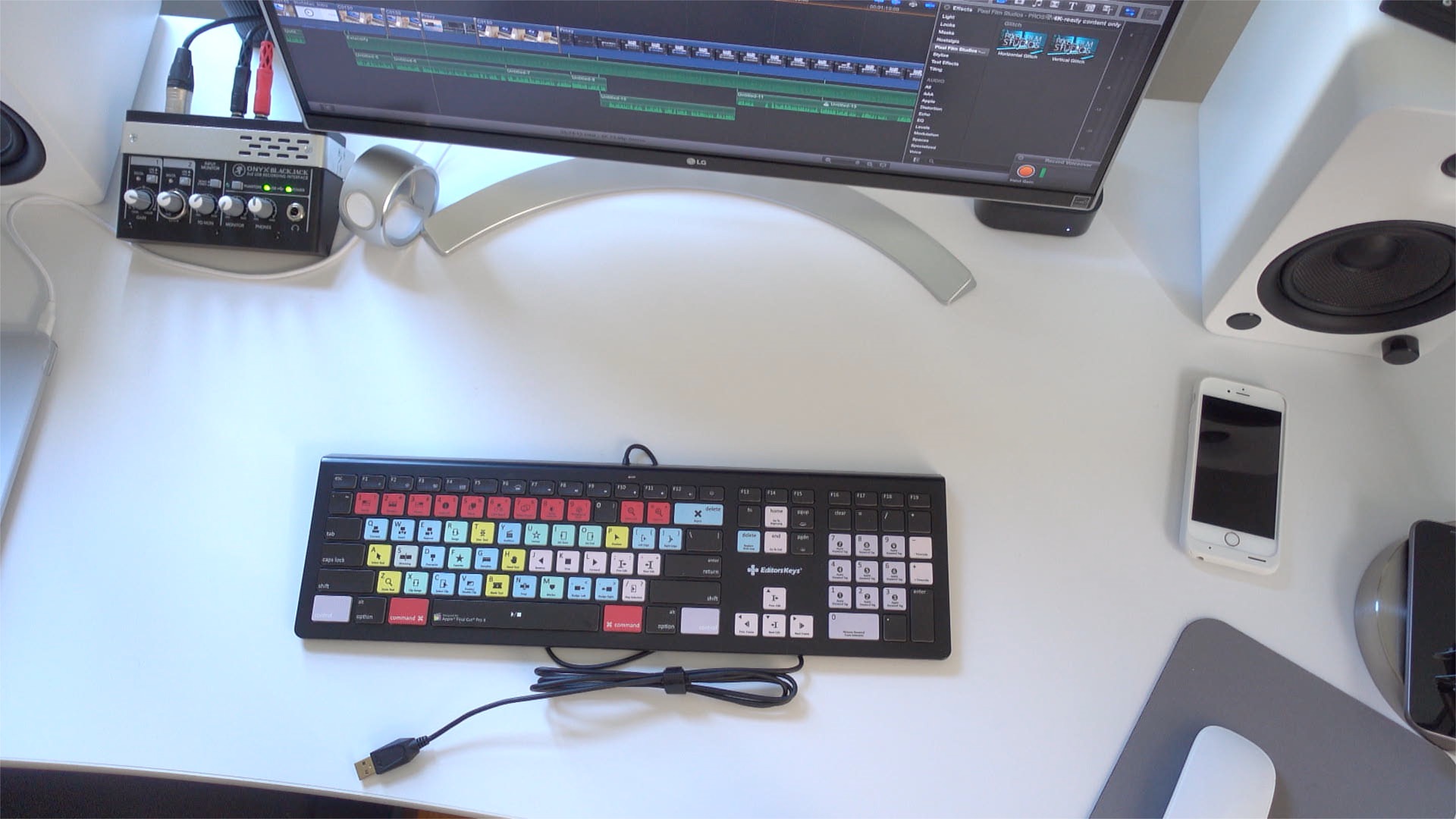 Most of the popular video editing apps have overlapping shortcut commands. For instance, I know that quite a few of the shortcut commands I use in Final Cut Pro X correlate 1:1 in Adobe Premiere Pro, and vice versa.

If this is your first time editing video to any degree, then the shortcuts and their meanings may be totally new concepts. In situations like this, the EditorKeys keyboard can assist with jump-starting your endeavors.

For those of us who use Final Cut Pro X every waking day, the problem with the EditorsKeys keyboard is that the printed key caps are set in stone. Most seasoned users like to use custom shortcut command sets, and static keys can’t accommodate for that.

If you’re a seasoned Final Cut Pro X vet, then you probably already know most of the shortcuts by heart, and/or are using custom command sets. Since the keyboard shortcuts printed on each key can’t be changed, it limits the keyboard’s ability to grow along with the user’s abilities. 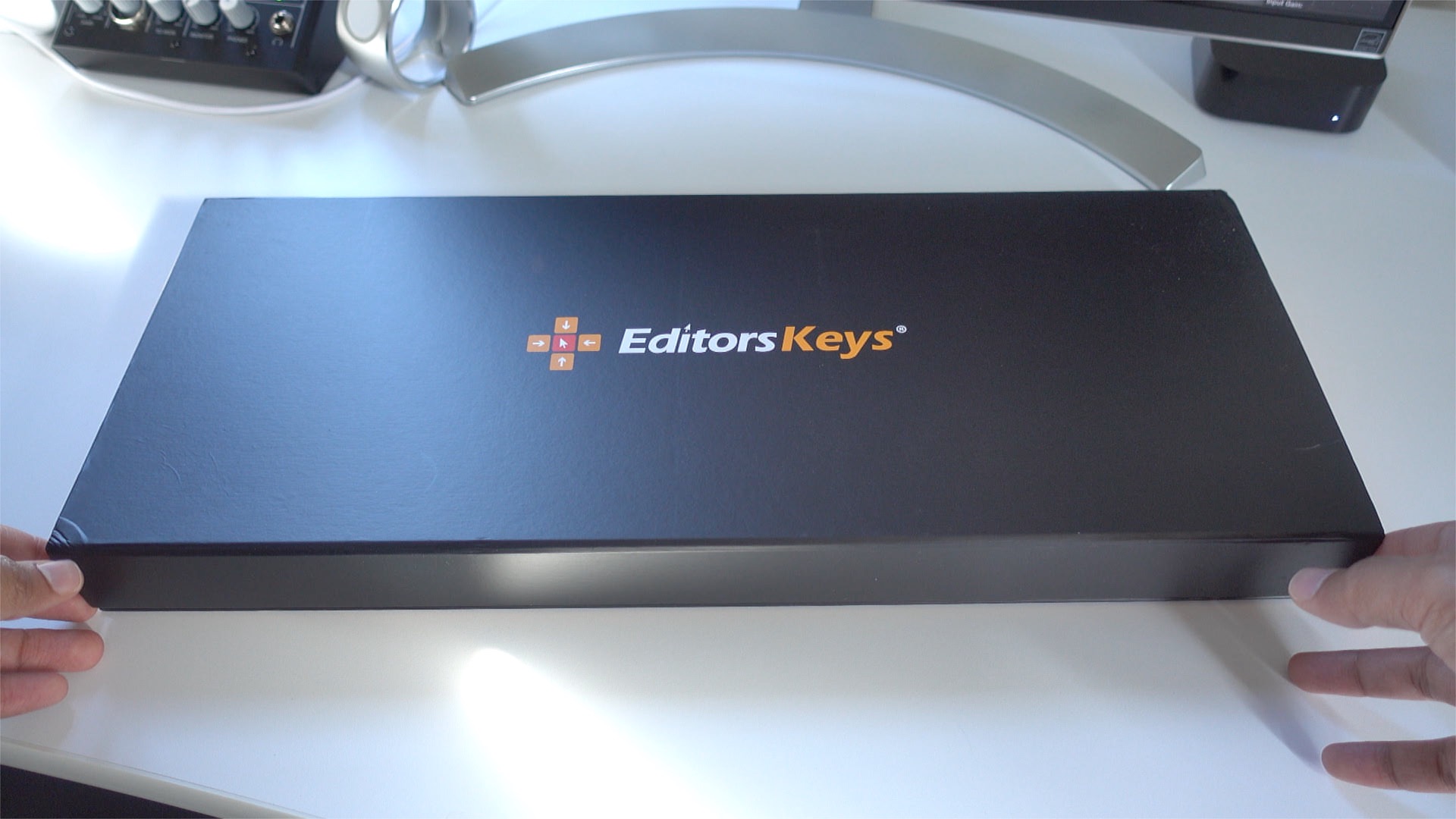 If, however, you’re brand new to Final Cut Pro X, or new to video editing in general, having every key spell out its function directly on its cap can be extremely helpful. It can help to accelerate the learning of the most important shortcuts without having to refer to back to the manual every time. In this case, EditorsKeys’ Final Cut Pro X backlit keyboard could prove to be worthy companion.

You can purchase the Backlit Apple Final Cut Pro X Keyboard from EditorsKeys for $129.99. The company also sells a variety of other keyboards and video editing-related tools via its Amazon store. Final Cut Pro X can be had from the Mac App Store.

Do you think a shortcut keyboard might benefit your workflow?