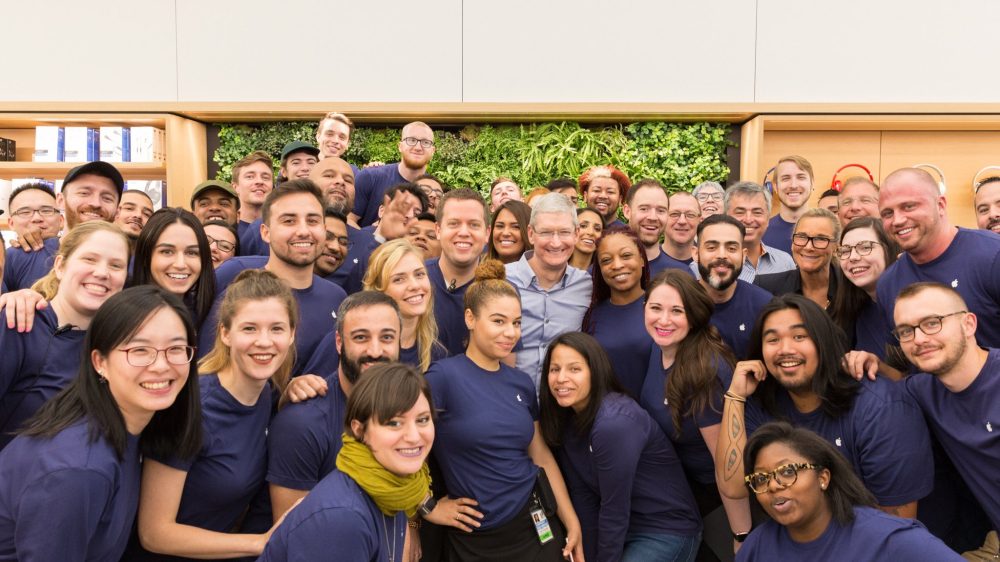 Following the company’s event in San Francisco last week, Apple executives have been making the rounds in New York City this week. CEO Tim Cook, retail head Angela Ahrendts, Eddy Cue, and Greg (Joz) Joswiak have all made various appearances throughout the city this week as we approach the iPhone 7 launch.

Earlier today, Cook, Ahrendts, Cue, and Joz all stopped to visit Apple’s new retail location at the World Trade Center. The retail store opened up initially last month and Ahrendts was in attendance for the opening, but she and her colleagues visited again today. In a tweet, Ahrendts shared an image from the visit and noted of the excitement surrounding the iPhone 7 launch this Friday.

Tim Cook also took time to visit PS 161, a public school called The Crown in Brooklyn. Cook noted of how iPads are being put to use at the school. “Inspiring to see how teachers use iPad to make a big difference for students,” Cook remarked in a tweet. Cook and other Apple execs has long visited schools where iPads and other Apple technology is used to teach. Earlier this year, Lisa Jackson visited The Barefoot College in India during her time in the country.

Additionally, Cook stopped by the Wall Street Journal offices in New York City. While it’s unclear if he was just visiting or went for an interview or meeting, Cook did take the opportunity to joke around with writers. When he saw a high number of PCs on desks, he apparently quipped that everyone there should have Macintoshes.

Earlier this evening we also learned that Cook will appear on Good Morning America tomorrow. Cook’s interview has already been filmed and a brief clip has been released. The interview is expected to focus on Apple’s recently announced iPhone 7, Apple Watch Series 2, and AirPods.

You can view a few tweets concerning the Apple executives’ tour of New York below. We’ll be sure to update if they make appearances anywhere else in the city.

Thanks PS 161 in NYC for a great visit. Inspiring to see how teachers use iPad to make a big difference for students pic.twitter.com/j8W44SWKOR

Apple's @tim_cook is visiting the WSJ offices. He just walked by our PC-covered desks and said, "you guys should have Macintoshes."

Hopefully Cook wasn’t there for this at the WSJ offices…

The iOS 10 update just did this to ten of my @wsj colleagues' iPhones. Definitely stand by before upgrading. pic.twitter.com/Mv87cFkHSM