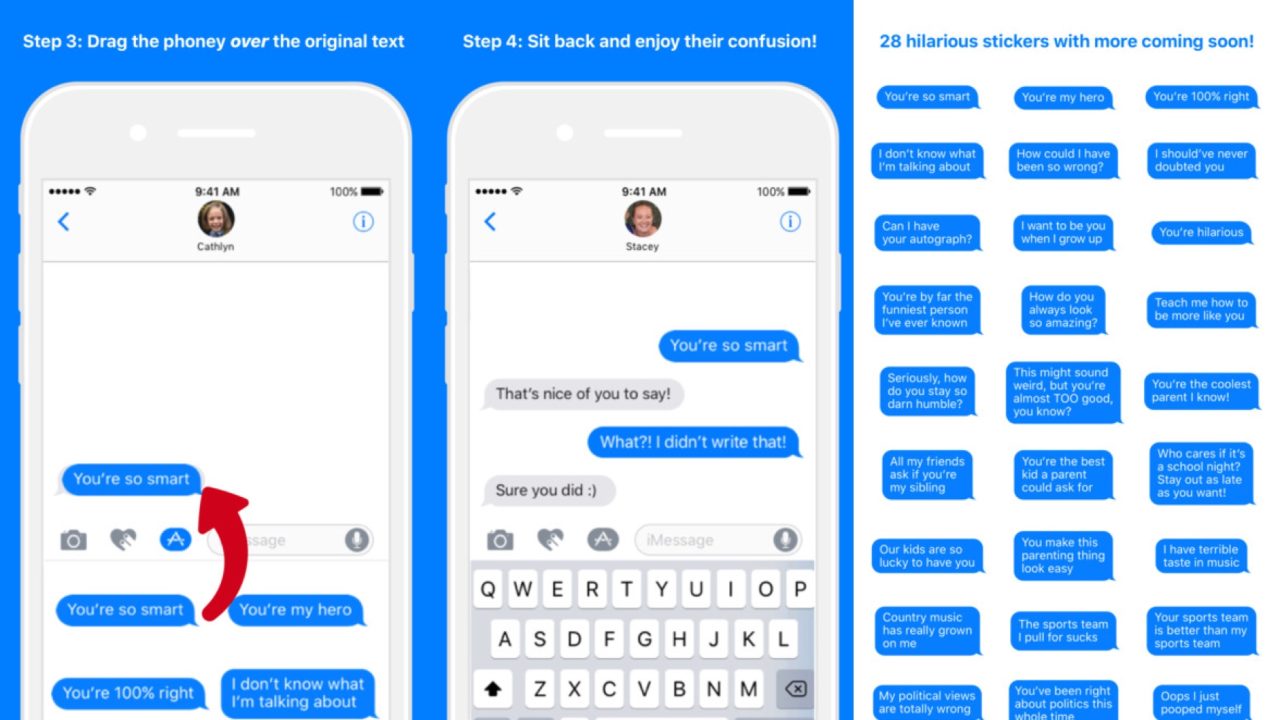 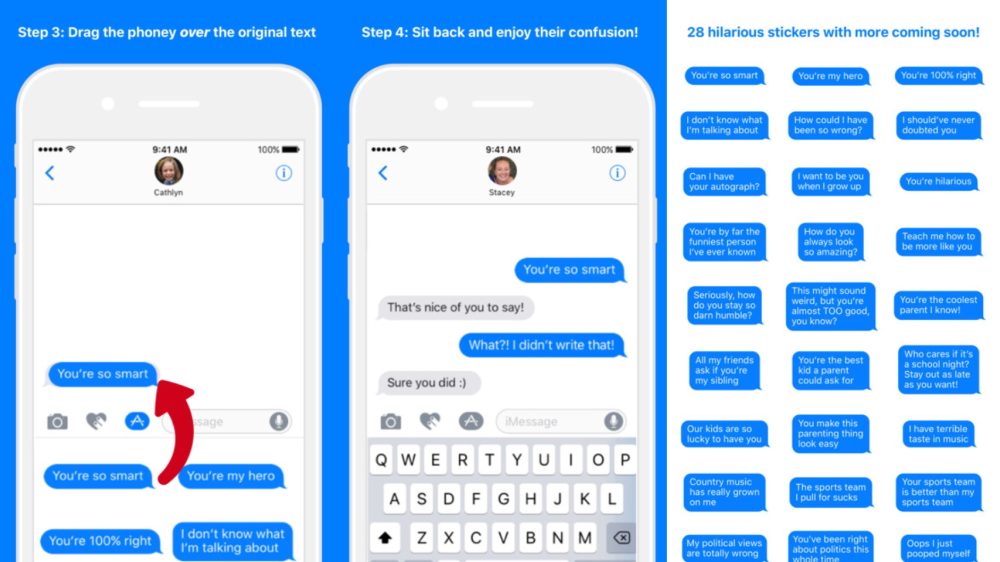 In the first high-profile iMessage App Store rejection we’ve seen, the developer of the Phoneys sticker pack says Apple has reached out with bad news: the company will pull the app in a week if it is not significantly changed. Phoneys (currently) features stickers that look like iMessage bubbles, effectively allowing users to replace messages from their friends with some funny alternative text.

The app hit #1 Top Paid in the iMessage App Store. Despite getting approved initially, Apple says that the store does not accept “prank apps” and the current form of the stickers violate Apple trademarks …

The developer, Adam Howell, received a phone call from Apple soon after the sticker pack shot to the #1 spot in the iMessage App Store. The Apple representative said that the Phoneys app impinges on Apple trademarks using the San Francisco font-face and the same green and blue bubbles that Messages uses. Apple also said that it could no longer be marketed as a prank app. (Howell says he never referred to it as a prank app but that he can see why media and others thought of it that way).

As it stands, the sticker pack will be pulled from the App Store in a week’s time. Apple is giving a week’s notice so that Howell can update the app to comply with their guidelines.

Bill was nice, but to the point. Apple’s lawyers weren’t happy that Phoneys got through the review process. The stickers couldn’t be blue or green, they couldn’t use San Francisco as the typeface, and the app could no longer be marketed as a “prank” app, because Apple doesn’t approve prank apps (even though I myself had never used the word “prank” when marketing Phoneys, others did, and I certainly understood where he was coming from). They were not going to pull the app, Bill made sure to emphasize. They’d give me a week, until next Thursday, to fundamentally change it so that the bubbles looked nothing like iMessage bubbles, instead looking something closer to “comic book cartoon bubbles”. I said okay, thanks a lot Bill, and that was the end of the conversation.

As the whole point is that the stickers look like iMessage bubbles, Apple’s offer to update the app to feature ‘comic book cartoon bubbles’ isn’t really a solution as it would change the purpose of the application completely. It’s all in the name of the app, it is meant to be amusingly deceptive. It’s called “Phoneys” because it makes it look like the recipient wrote something different. Apple’s requirements to change the iMessage bubbles into comic book callouts will destroy the illusion and the stickers will no longer be confusable with the actual message.

Naturally, this is the kind of app that was in a ‘grey area’ from the beginning — Howell even says his wife was surprised that it got approved. It was always toeing the line of what was acceptable but it was approved without dispute by Apple. That’s the real flaw here in the process: Apple originally approved the app as is and only followed up with its intent to remove it after it became popular.

The company is being nice about the process, by giving Phoneys time to change rather than pulling immediately without explanation, but the root cause is a problem. App Review is useless if it blindly approves everything until something becomes popular enough to deserve closer attention.

Still, this is the first high-profile sticker pack rejection we’ve heard about it. Howell hasn’t decided whether he will comply with Apple’s demands or just remove the app from sale. Right now, it continues to be the #1 Top Paid app in the iMessage store so grab it whilst it is still here …