The gradual death of the third-gen Apple TV is continuing this evening, as Apple has officially discontinued the device. In an email sent out today to employees and education partners, obtained by 9to5Mac, Apple confirmed that it is discontinuing the device, shifting its focus entirely to the fourth-gen, tvOS-powered model and possibly a new model.

In the email, Apple explained that it would fulfill order backlog for the device, but pointed partners towards the other available products for new purchases.

The death of the third-gen Apple TV has been gradual. Last month, Apple made it more difficult to locate the device on its online store, while retail locations began pulling the device from shelves. You can still get them if you look around. The best price currently is $59 at Staples new matching Apple’s refurb price.

Apple has still not commented on its phasing out of the third-gen model, though it’s not surprising. The third-gen model was introduced in 2012 and was quietly updated a year later. Since then, Apple has shifted its focus to the tvOS-powered fourth-gen Apple TV.

It’s unclear if the third-gen Apple TV will receive any additional software updates, but the device was last updated in February with a variety of security fixes.

It remains to be seen if Apple will officially comment on the discontinuing of the third-gen Apple TV, as it has done with other products, or if it will be a silent process. Nevertheless, the fourth-gen model is now the company’s primary focus and we should expect updates there for a long time to come. 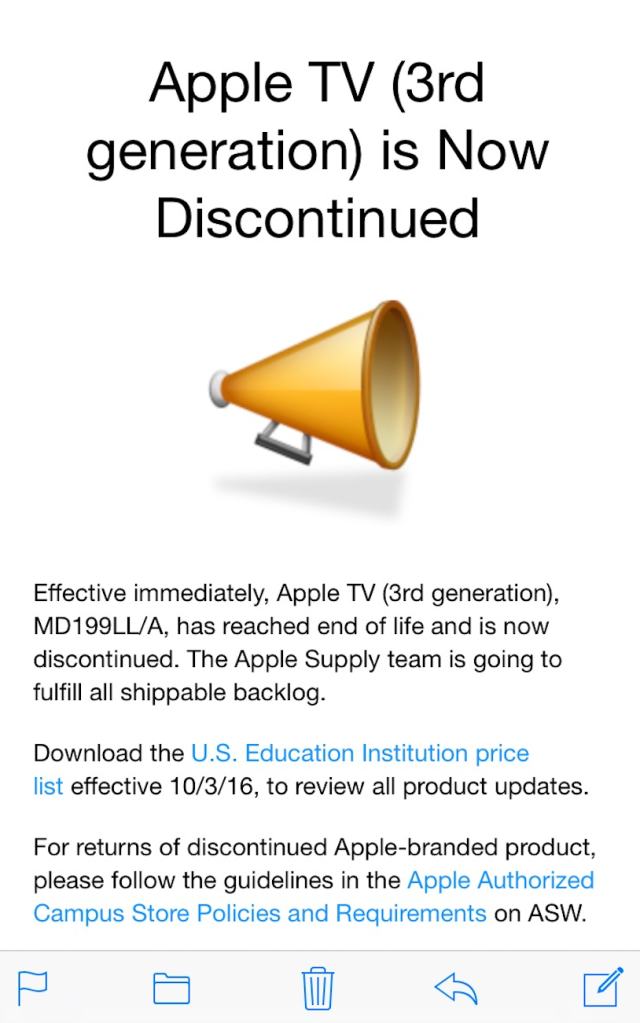