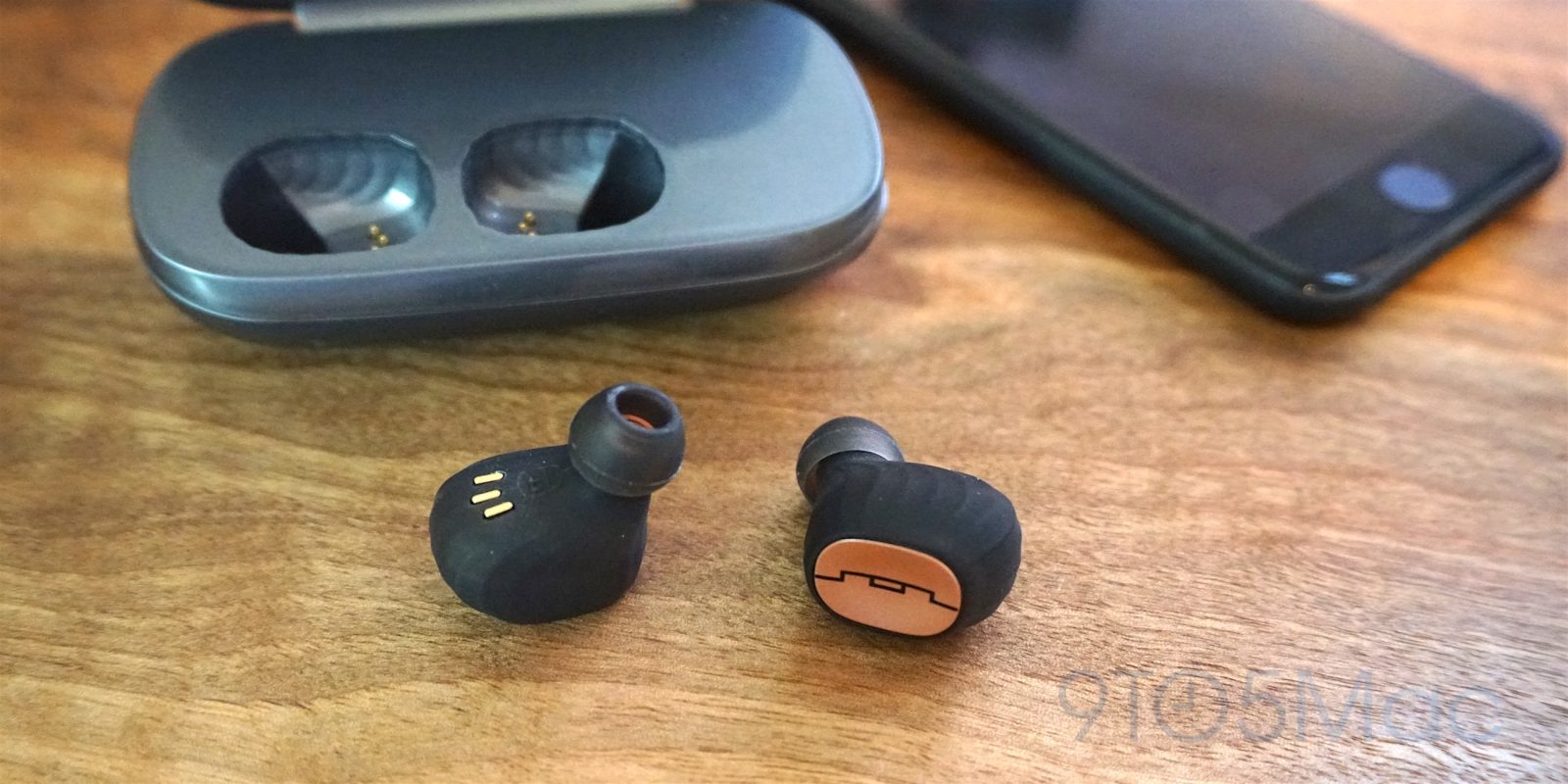 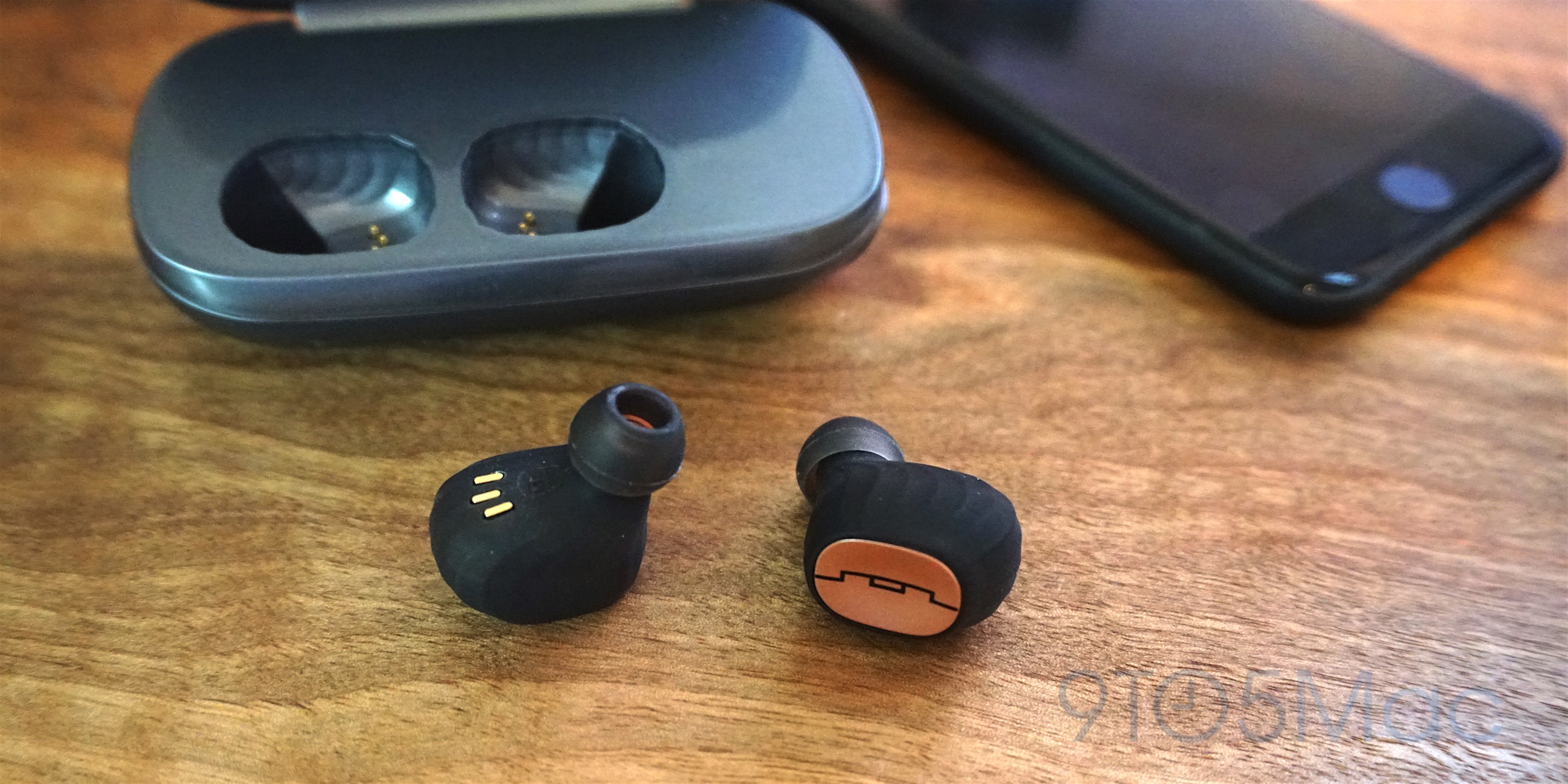 Audio accessory maker Sol Republic is today launching its first product in the cord-free headphone space, the ‘Amps Air’ wireless earbuds. The launch would have been timed with the now delayed release of Apple’s own similar wireless AirPods that were previously expected to launch late this month and possibly following the company’s Mac event today. Apple released a last minute statement yesterday informing customers it needs more time to get the product right before shipping.

But after using the new Amps Air earbuds from Sol Republic over the last week, I’m convinced they will be a better option for many…

The Amps Air earbuds are covered in a matte black rubber material that feels particularly soft against the skin and makes for a more comfortable fit compared to the usual glossy plastic used on similar earbuds. The grooves you see on the matte rubber helps them to grip your ear and increase airflow to help with sweating, according to the company. 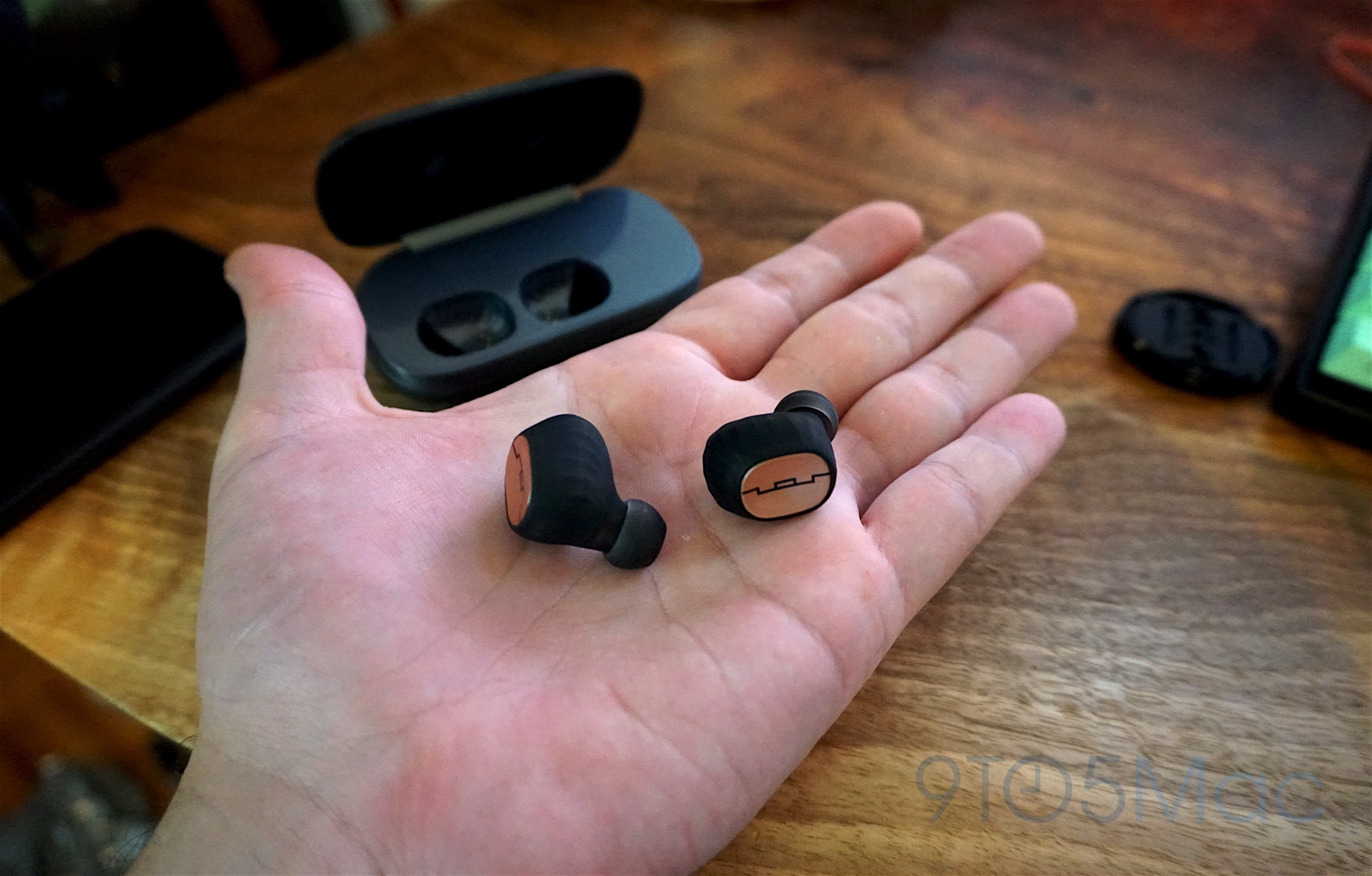 The only exception is the large button on the side— the part of the earbud exposed when you’re wearing them— which acts as a power button and lets you control music, Siri and calls (rose gold color on my review unit). The company says they are sweat-resistant, and I found the matte material helps with that— sweat won’t make them slippery or reduce comfort in any way.

There are a lot of people who don’t prefer the design of Apple’s AirPods and the way they hang out of the user’s ear. But the alternative is cramming everything into a design much bulkier than the earbuds you’re probably used to. That’s what Sol Republic opted to do, but whether or not this approach looks better in the ear than Apple’s will be a matter of opinion.

I found the rather traditional flexible silicone tips on the Amps Air buds to fit snuggly and comfortably in my ear, more so than Apple’s EarPods which I tend to find uncomfortable. Like a lot of other popular wireless earbuds available, the Amps Air come with four different silicone tip sizes that you can change for a perfect fit. There are no clips or anything that attaches them to your ear for extra security like others, but I didn’t have any issues with feeling like one might fall out when in motion.

Since there is no cable to put media and call controls on truly wireless earbuds, I’ve found controls to often be a frustrating experience on other products I’ve tested. The Sol Republic, however, does a nice job of keeping everything simple, with either a single or double press of the sole button on either earbud controlling media, calls, and Siri. If you’re listening to music, the button is pause/play. If you get a call, a press will answer/end the call, while a long press will decline. 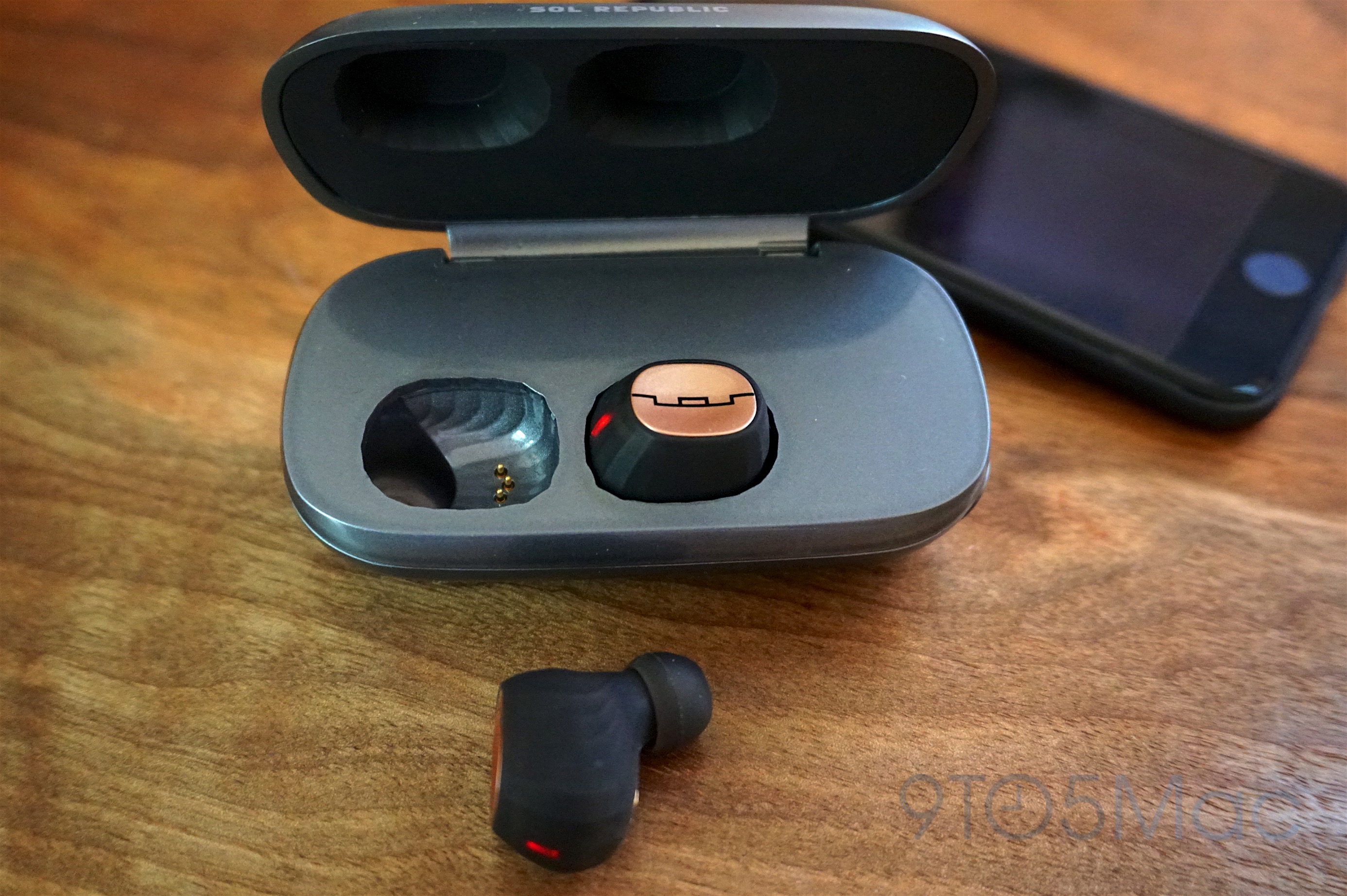 You can also activate Siri with a double press of the button on either earbud.

The quality of the mic for calls is passable and I was able to carry out phone calls successfully even in environments with background and street noise. It’s not as good as the phone itself, but on par with other headphone mics and better than the iPhone speaker phone or EarPods experience.

If you want, you can connect a single earbud for mono use.

If I could only make one argument to justify the $179 price point of these earbuds— a $20 premium over Apple’s $159 AirPods— it’s the well above average sound quality. The most notable surprise for me was an extremely rich, booming low-end, something I had yet to experience with truly wireless earbuds. The Amps Air offer big bass, in a good way, and overall full and loud sound that rivals the top of the line wireless earbuds, cable-free or not. 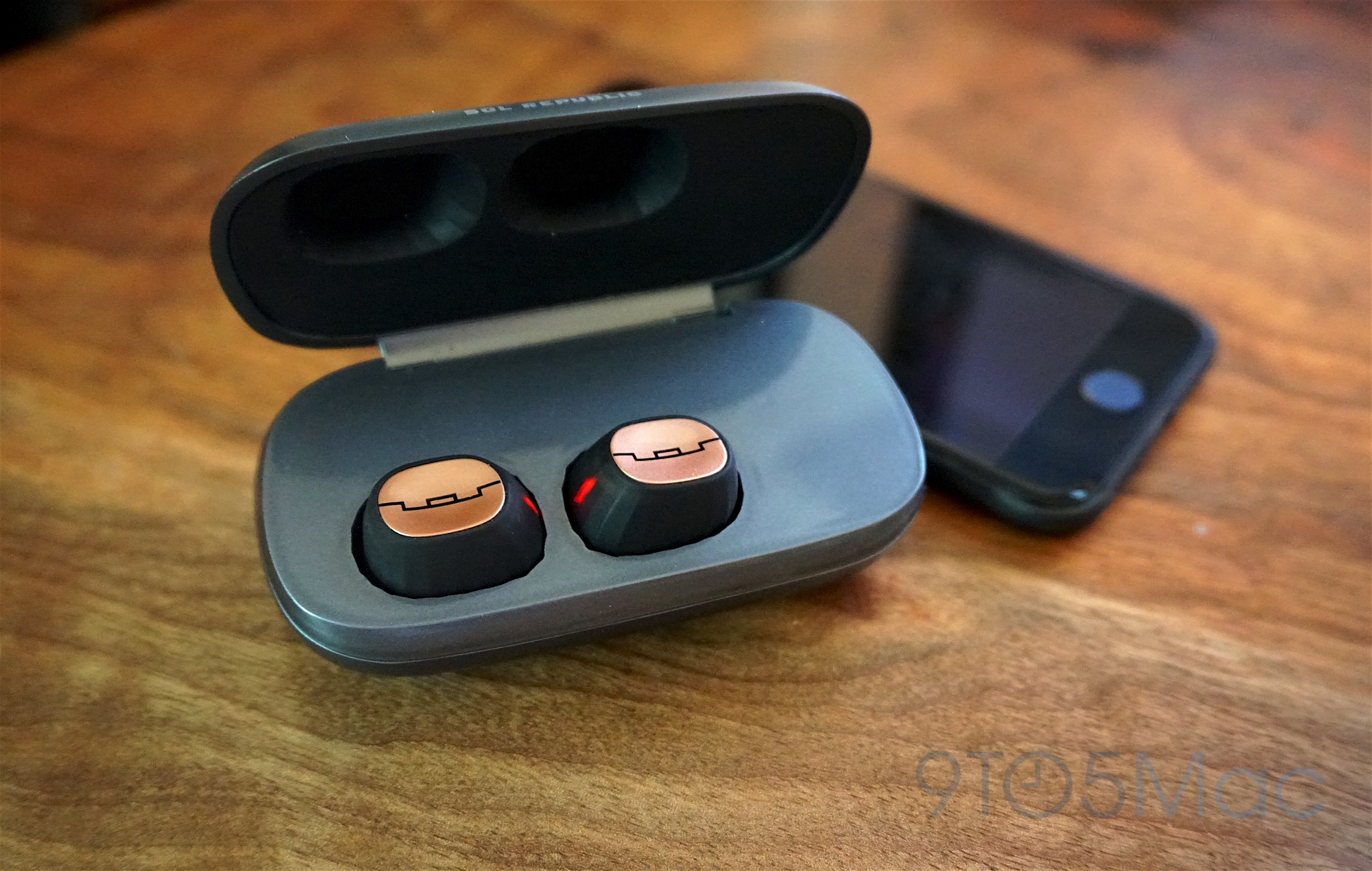 We’ve yet to put them up against Apple’s AirPods that were supposed to launch this week, but the Amps Air headphones absolutely blow away any of Apple’s current EarPod products, which many early hands-on reviewers have said are similar to the sound quality offered by AirPods. They also sound significantly better than my current daily driver wireless headphones, the very popular and well-reviewed Jaybird Freedoms that cost about the same amount.

The earbuds, which connect to their charging case magnetically, will automatically turn on and off when you take them in or out of the case. And once you’ve paired once with your iPhone, they’ll automatically pair, in my tests, quite reliably. You can manually hit the button to initiate pairing or turn on or off as a backup. 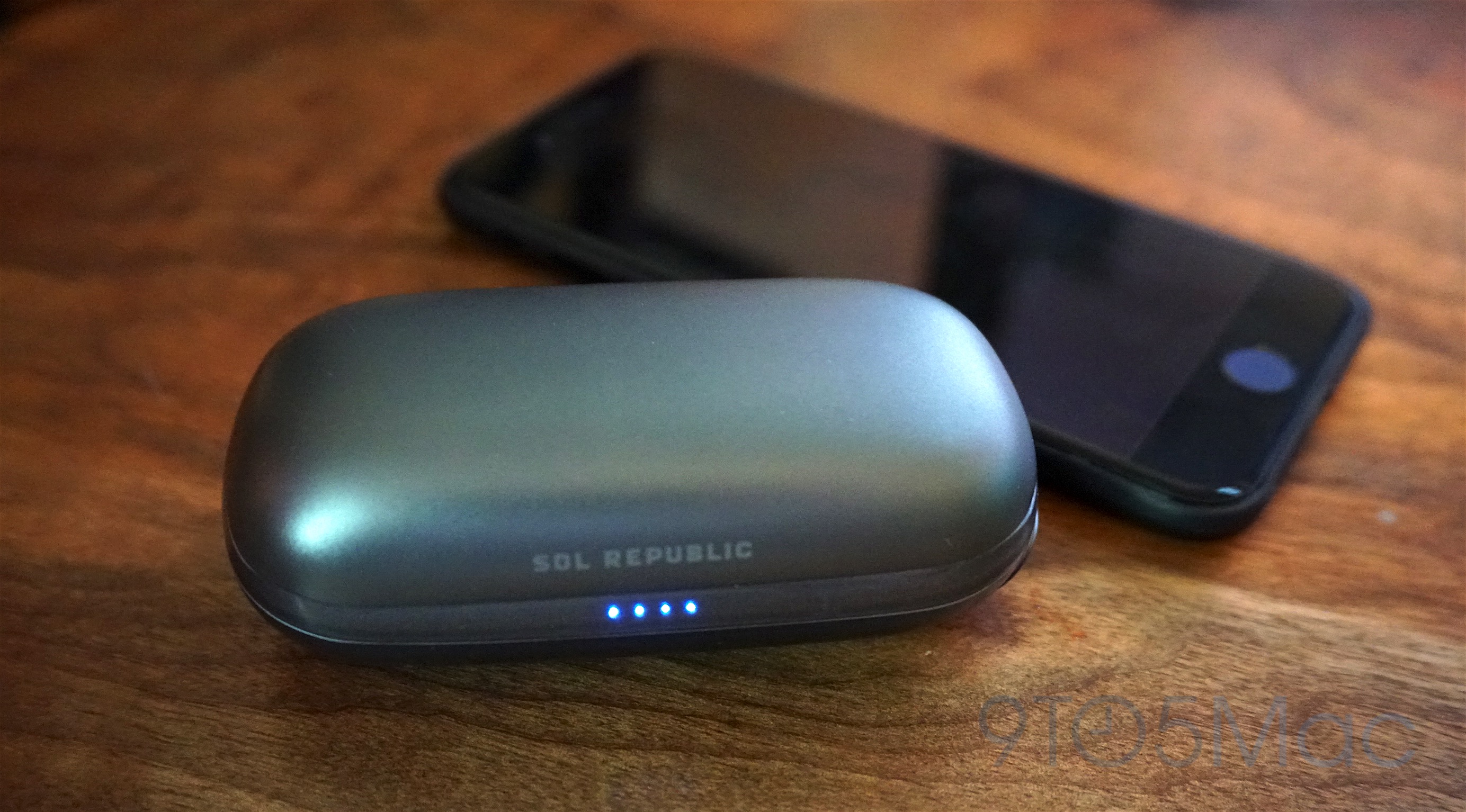 A shake of the case activates charging indicator lights on the front, and the earbuds themselves have indicators for charge level, pairing, etc.

At $179, the decision is clear: if Apple’s AirPods, at $159, just aren’t cutting it— either because of the design, fit or sound quality— the Sol Republic Amps Air headphones provide a slight step up in at least some those areas that might be worth the $20 premium. There is a large audience of iPhone users that don’t prefer the design or fit of Apple’s earbuds, and many that are anticipating that the AirPods, being relatively the same shape as the old EarPods, might not offer an ideal fit. For them, the Amps Air are for now one of the better truly wireless headphone options available.

The new Amps Air earbuds will be available starting today in a few color options from Sol Republic’s website, BestBuy and Amazon.