Apple has released iOS 10.1.1 for iPhones and iPad, less than a week since the iOS 10.1 update which included iPhone 7 Portrait Mode. The bug fixes a specific issue with the Health app, where data was not showing for some users. There may also be improvements to other niggling issues, which are alluded to (“bugs”, plural) but only the Health fix is explicitly referenced in the release notes.

The update is available for iPhone, iPad and iPod touch users. To update now, hit Software Update in Settings on an iOS device.

The update appears to be a small change for an isolated bug, weighing in at just a few megabytes.

Although it does not appear the Health bug was widespread, it is nice to see the company following up with a fix so quickly after iOS 10.1’s launch. The update is not expected to include any major new features; it is a simple bug fix release. 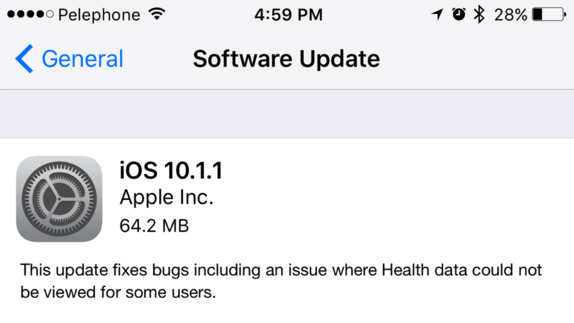 Please note, the update is still propagating around the world and may not appear on your iOS device just yet. Wait a few minutes and try again as Apple updates its global server infrastructure.