Review: Kanex GoPower Watch is an ideal travel charger that can refuel Apple Watch over a weekend 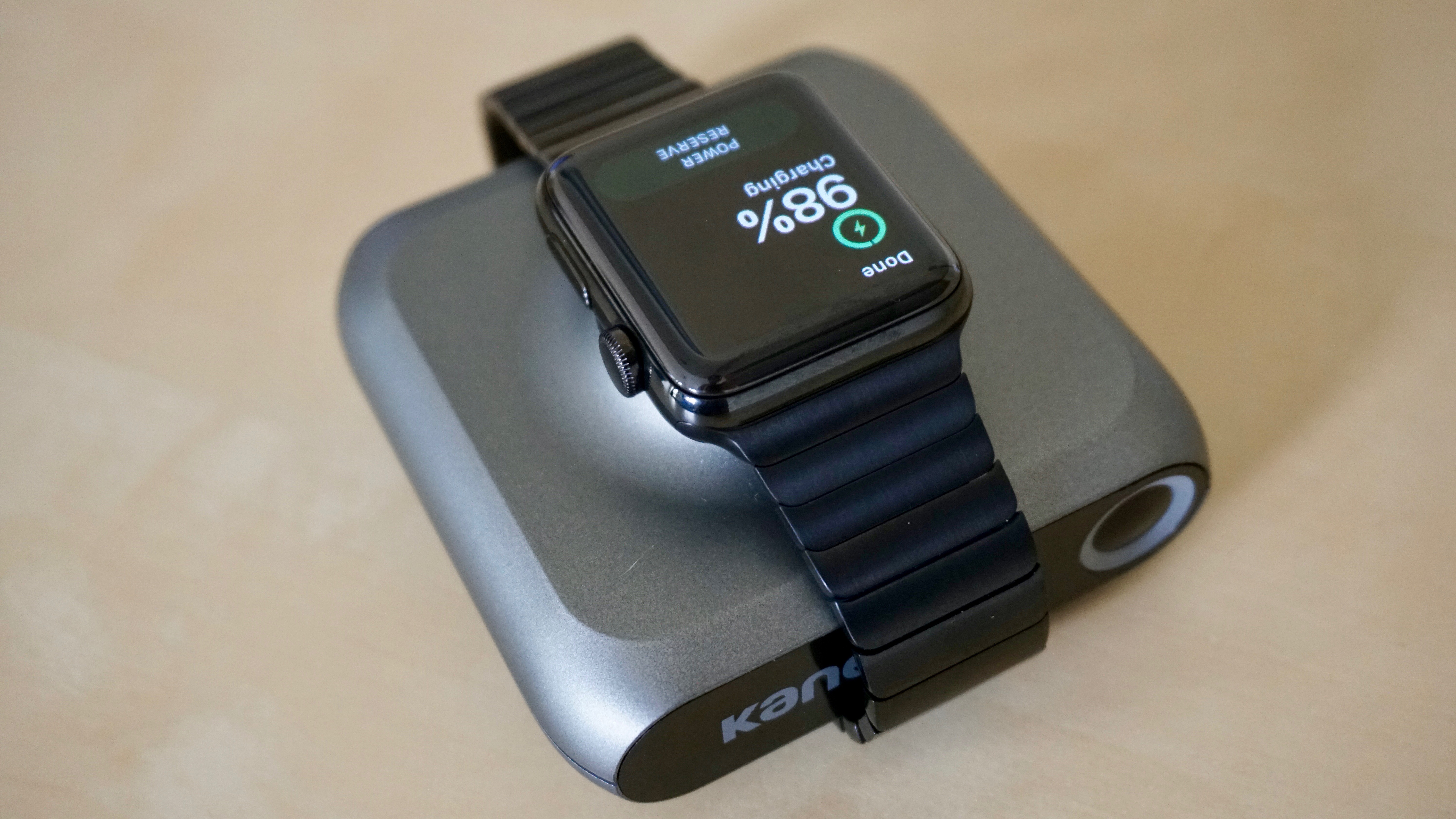 Part of the price is likely because it uses Apple’s official magnetic charging adapter to connect to the Apple Watch. It’s a round white puck that holds your Apple Watch magnetically on contact. MFi (Made for iPhone) means you can trust that it’s certified by Apple and isn’t risky to use, but it comes with licensing fees for manufacturers which in turn tends to increase the price.

There isn’t much competition in the MFi Apple Watch portable battery space yet either so it’s still a premium product that solves a somewhat niche problem.

Kanex GoPower Watch packs in a 4,000 mAh battery. For comparison, a similarly sized pack from Anker has a slightly larger 5200 mAh battery inside for half the retail price at $49.99 and goes for as low as $15.99.

It’s up to you whether or not that’s worth the premium, but it’s definitely more convenient to have one pocket- or bag-friendly unit over a battery and cable combination if given the option. 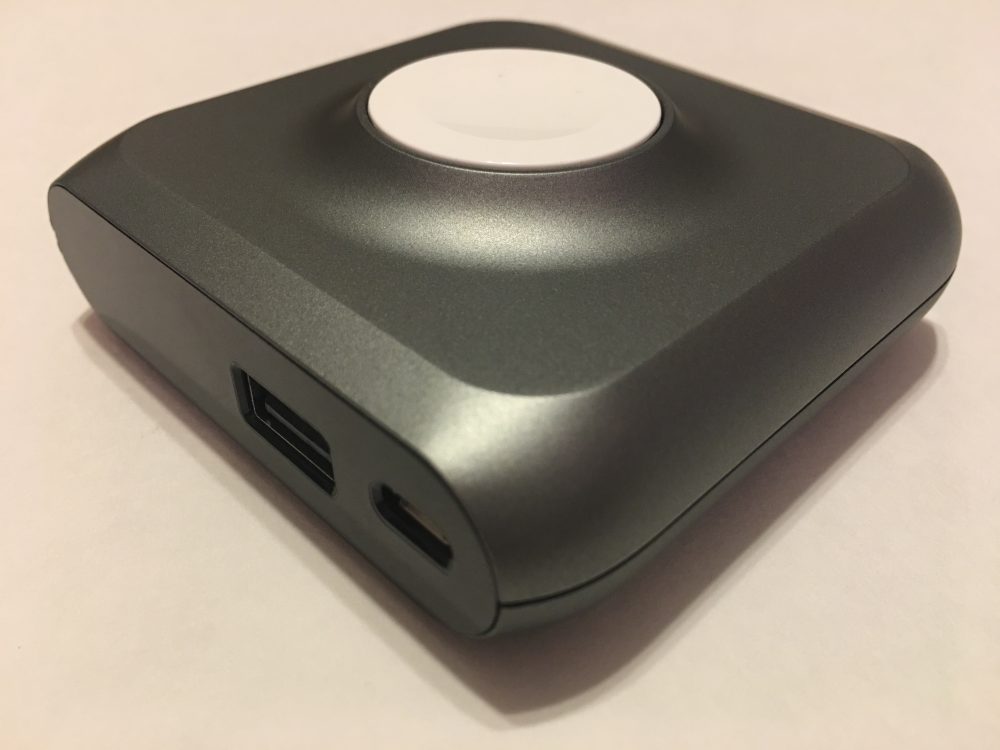 GoPower Watch doesn’t just include the adapter needed to charge your Apple Watch. It also has a traditional USB-A out port (DC 5V 1A slow) that can charge your iPhone if you supply your own Lightning cable. The 4000 mAh battery is rated to give your Apple Watch up to six charges, according to Kanex, but that battery capacity is only ideal for tipping off most iPhone emergency situations.

GoPower Watch relies on a microUSB in port for recharging the battery itself. Kanex supplies the necessary cable, but ideally a Lightning port would be more convenient for iPhone owners (you still need an iPhone to use the Apple Watch after all). Female Lightning ports on non-Apple accessories are still rare after first popping up a year ago, but it would also help justify the price. 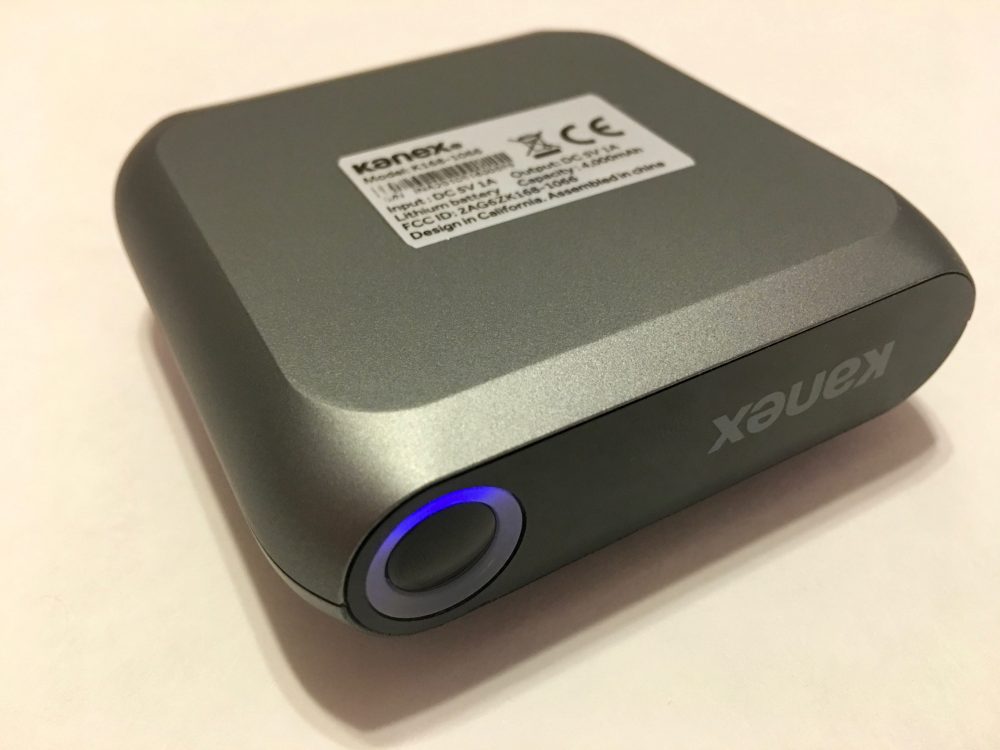 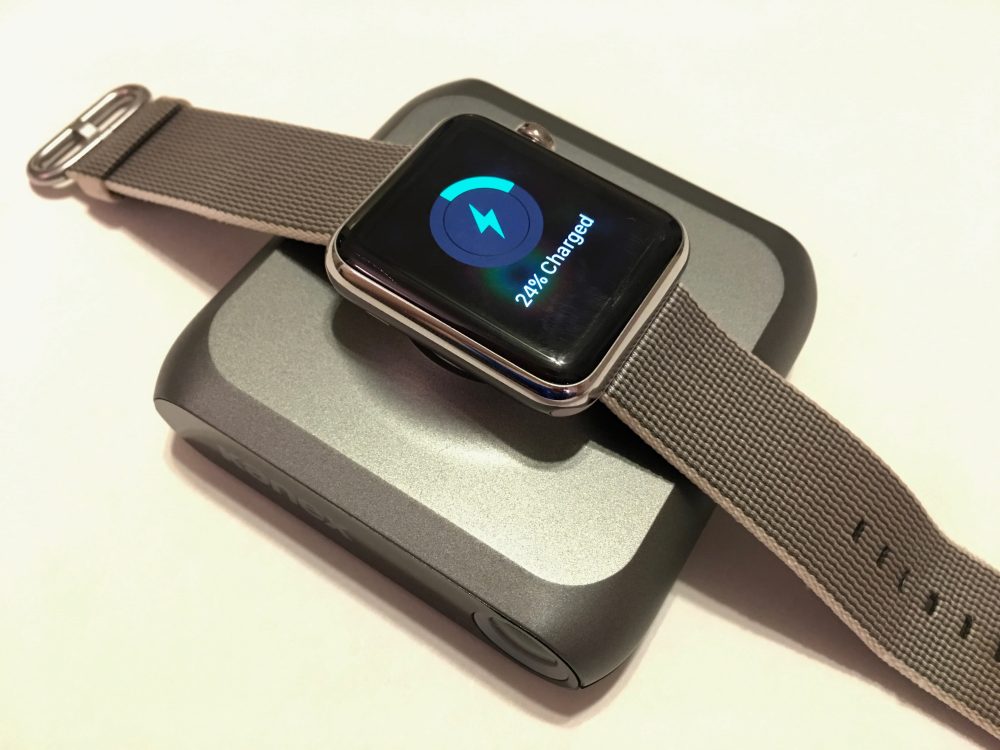 In testing, GoPower Watch got me through three nights without issue with both the first-gen Apple Watch and the newer Apple Watch Series 2 — both larger 42mm versions (expect longer on 38mm). I don’t doubt that GoPower Watch can get most users through six nights, though. Most of my testing was done with watchOS 3.0, but watchOS 3.1 dramatically improved battery life for me even with active use. If you’re recharging from 40-50% rather than 0-10%, you’ll get more mileage out of GoPower Watch. 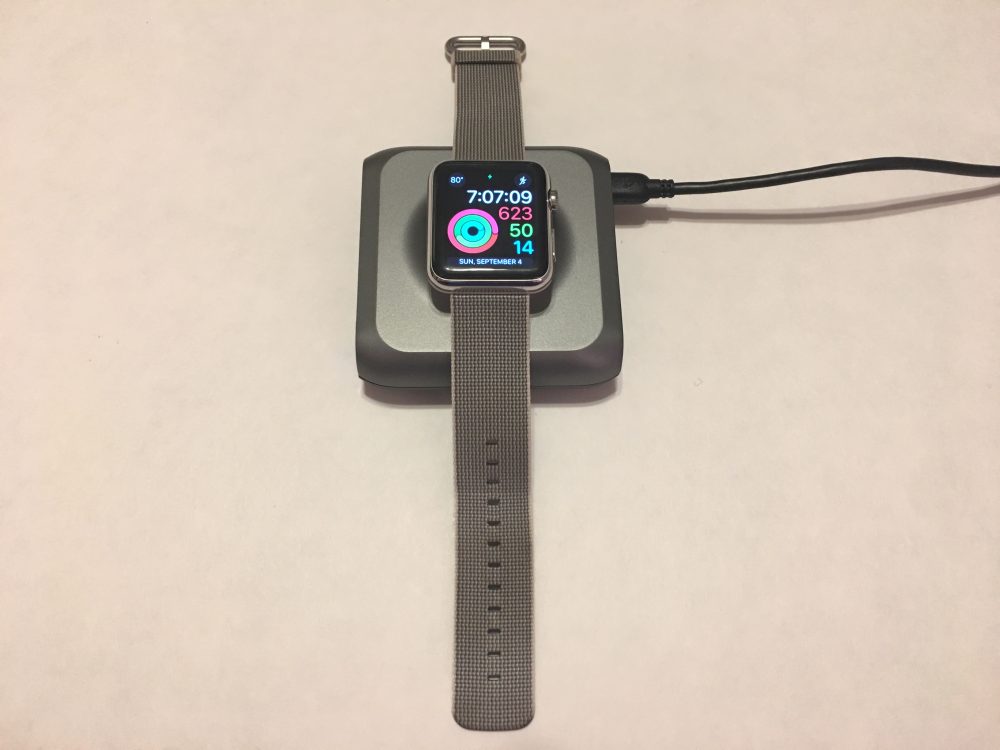 You can also totally replace your current Apple Watch charging cable with GoPower Watch (which isn’t immediately obvious). It has priority charging detection so your Apple Watch will recharge first before the battery pack recharges when plugged in. 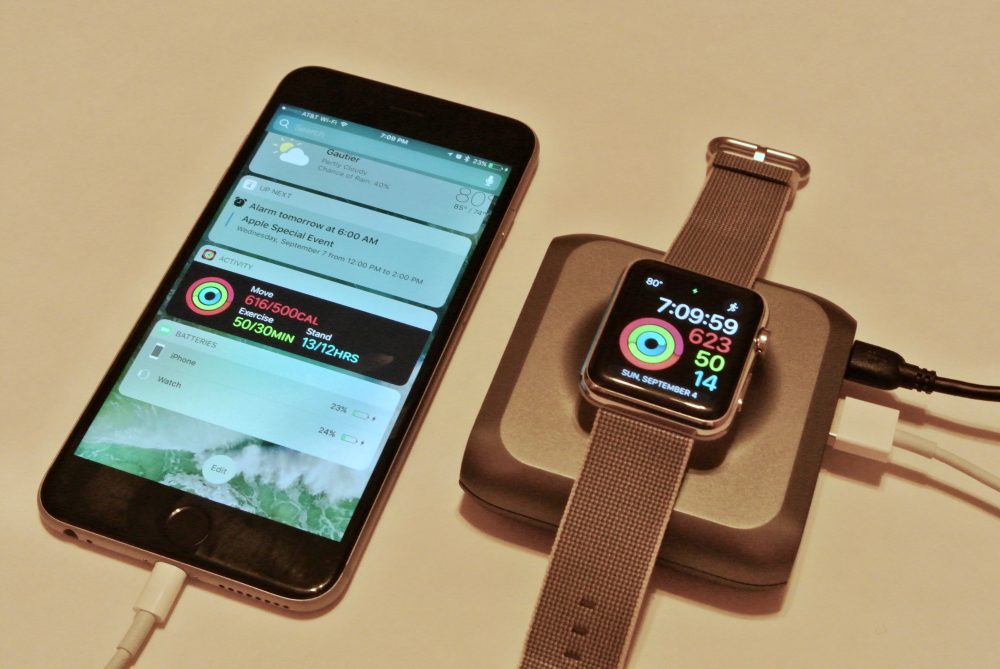 Connect a Lightning cable to GoPower Watch and you’ve also got a single solution for recharging both your Apple Watch and iPhone when connected to power. This is convenient when traveling even before you consider the battery pack inside.

My favorite use for GoPower Watch (admittedly) so far has been having a charger in my desk drawer or backpack when updating watchOS to a new version. Sometimes you can get around the requirement to have 50% or more battery and be on a power source, but it’s a fluke when that works. It’s a pricey purchase for this single solution, but it really is convenient to have GoPower Watch around without having to plug-in a charger in the office that I don’t regularly need. 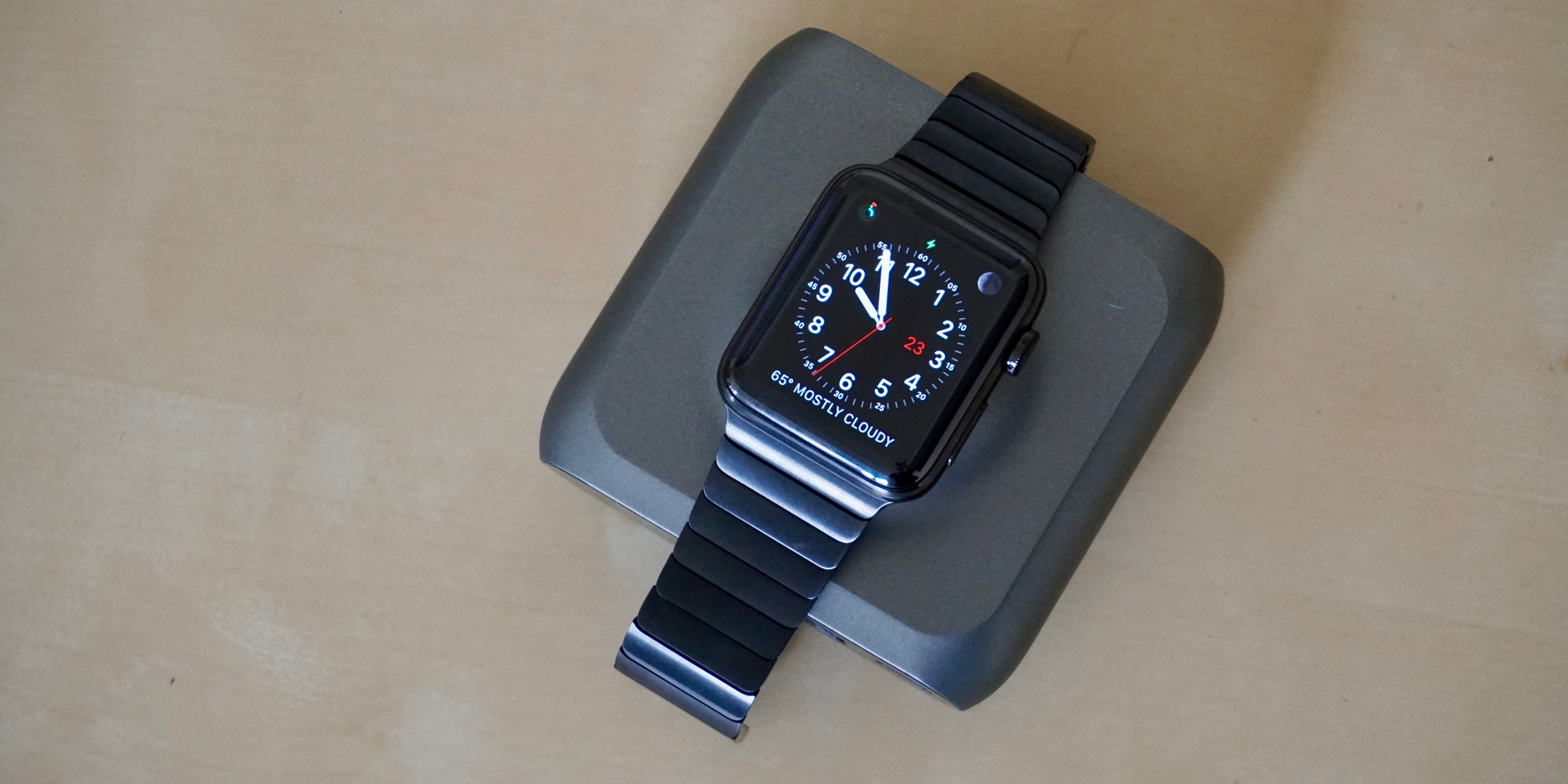 It’s also convenient to have when traveling on long trips and ideal for weekends away from electricity, but you can find less convenient solutions for a lot less money.

For example, I took an overnight trip earlier this summer before GoPower Watch existed and relied on a portable battery pack and cable for recharging my Apple Watch overnight; the charging process was rather finicky and required checking in to make sure the battery still knew it should be charging the Apple Watch.

GoPower Watch would be ideal if it recharged over Lightning and could squeeze in enough battery to reliably serve both your iPhone and Apple Watch for a weekend trip. 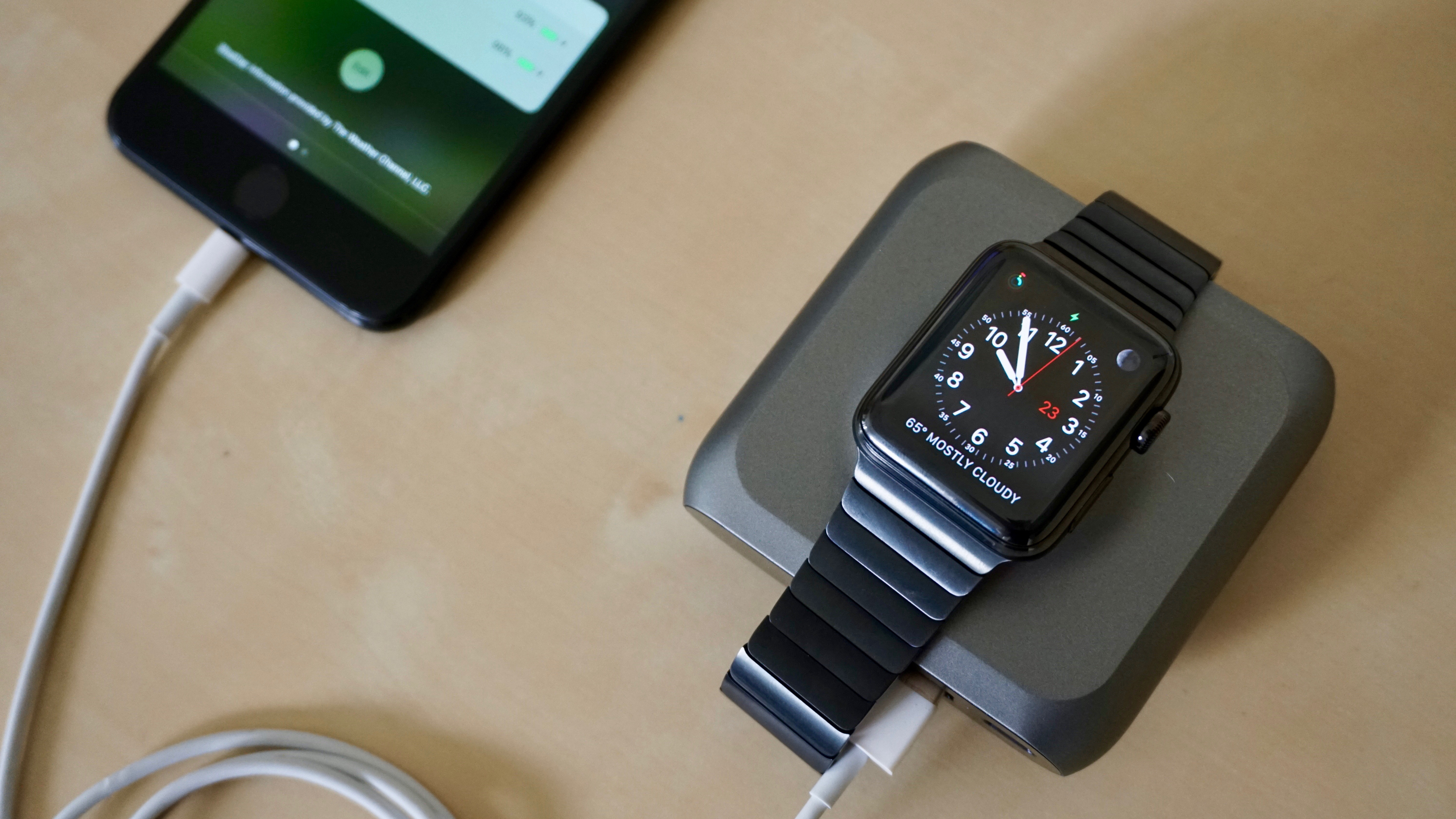 The form factor also doesn’t play as nice with closed-style bands as standalone bands, although it will work well enough. These days I’m using it with Link Bracelet which is a closed style band; the only issue is making sure the surface under Link Bracelet won’t scratch on contact. The design is ideal for open style bands like Sport and Leather bands.

(You also experience a slight space issue when connecting USB-A cables to charge out to iPhones while charging Apple Watch with closed bands; there’s some overlap for the port and the band lapping around. The solution? Be sure the place the Apple Watch around the port-less side unlike in my photo above.)

GoPower Watch is available from $75 (reg. $99) on Amazon and regular price from Kanex. If you want to go off the grid for a few days and keep your Apple Watch going, I recommend checking it out.