One of the more popular utility apps for the Mac has always been BetterTouchTool. The utility gained popularity for bringing a variety of new options and power to the Mac’s trackpad and keyboard, and we’ve highlighted it several times in the past. Now, BetterTouchTool is adding supporting the new MacBook Pro’s Touch Bar.

We’ve already seen a handful of utilities for using the Touch Bar in ways Apple didn’t intend. Some useful, some not so much. Apple, of course, also lets users customize the Touch Bar to a certain degree. Now, BetterTouchTool brings a host of new customization options to the input method.

The action’s name can be customized to whatever you desire. For instance, you can assign a toggle that reads “Move To Left Space” and tapping it will move the forward-facing app to the Space to the left. You can also add an icon to the Touch Bar icon and customize the color, making it easy to now what each button does. The majority of icons Apple designed, however, are black and white with the exception of tabs.

While some have expressed contempt for Apple’s new Touch Bar, it’s tools like BetterTouchTool that will truly highlight the power of the input method.  With developers offering up their own take on how the Touch Bar should behave, perhaps Apple will take a few hints and add additional first-party capabilities to it.

Although, it’s important to note that this version of BetterTouchTool is “very alpha” and contains a few bugs. Though, it’s fun to customize the Touch Bar to make it a much more powerful input method. The utility can be downloaded from here for free. 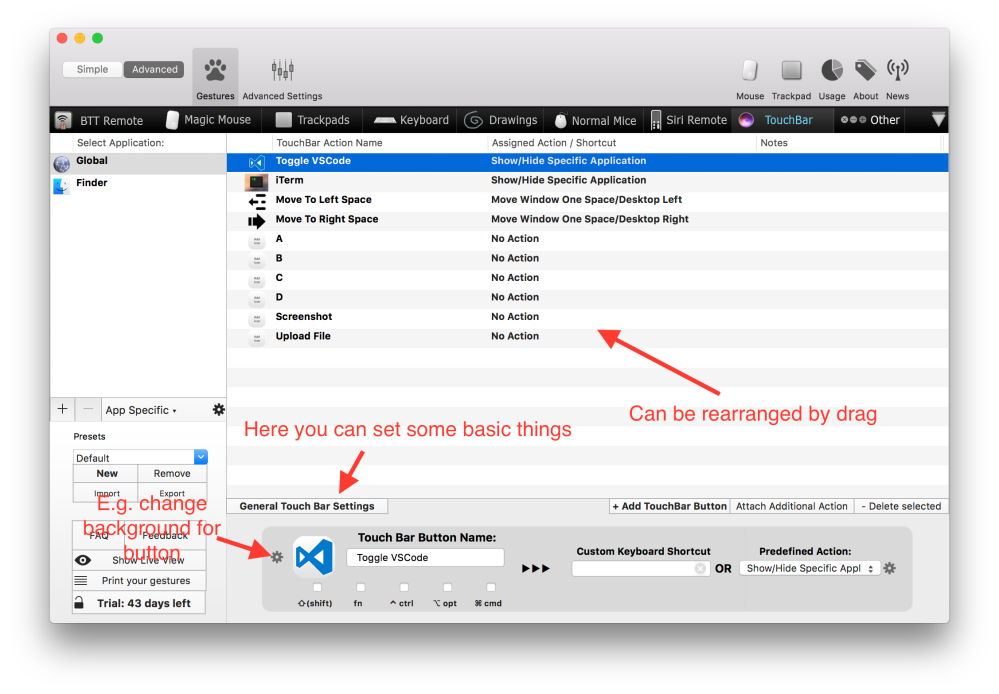