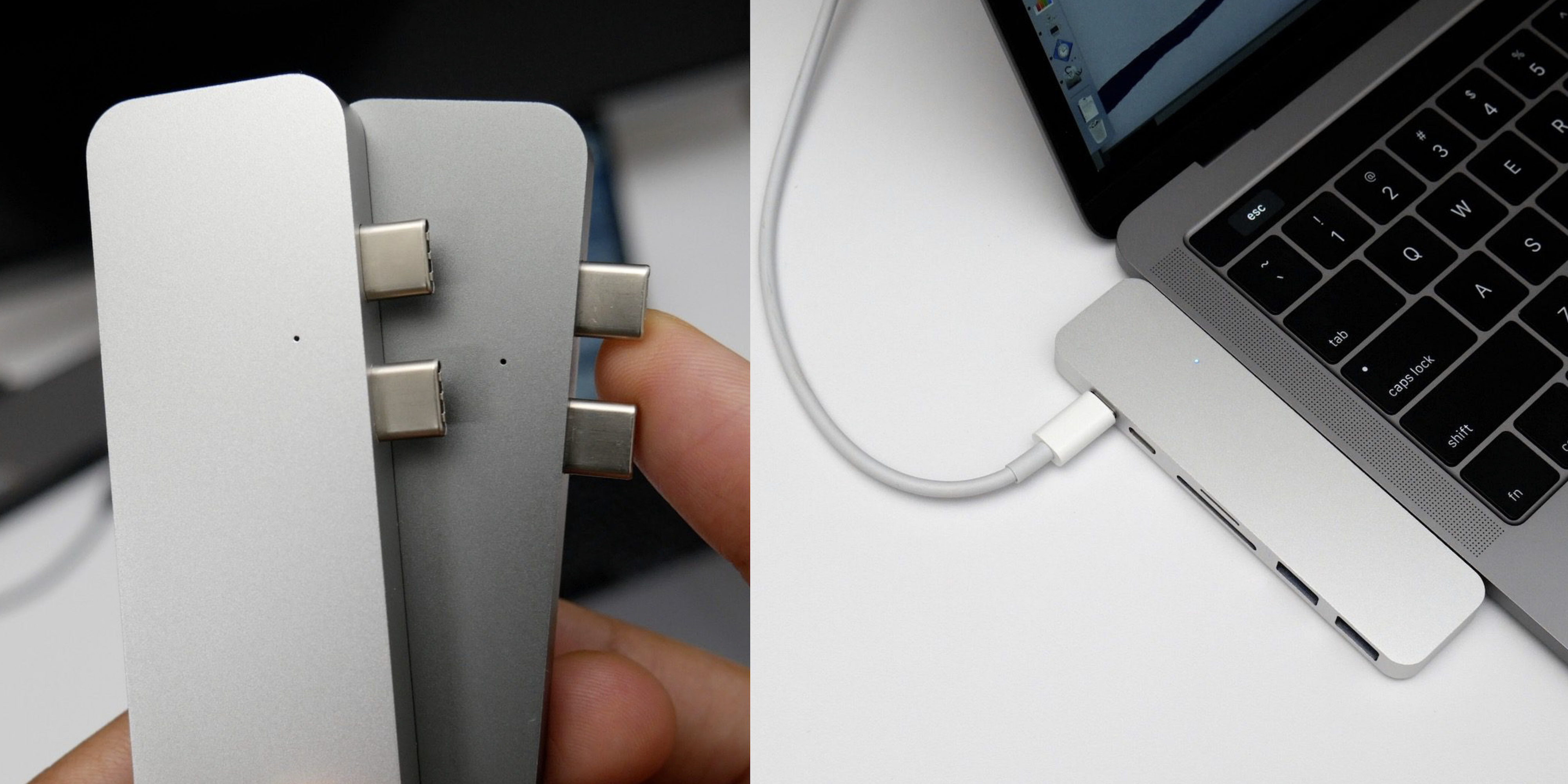 The HyperDrive is a compact USB-C hub that adds some much needed port-diversification to the 2016 MacBook Pro. While it may look similar to some already existing USB-C hubs out there, the HyperDrive is Thunderbolt 3-enabled, and supports the new MacBook Pro only, as it connects to two of the machine’s USB-C ports simultaneously.

Hyper just launched a Kickstarter campaign for the HyperDrive today, but I’ve already been testing out a few almost-finished, fully-functioning prototypes, and it seems promising. Have a look at our video walkthrough for a brief hands-on look at the HyperDrive in action.

The HyperDrive is machined out of aluminum, and comes in Space Gray or Silver colors to match the two available hues of the 2016 MacBook Pro. Each device is slightly larger than a pack of gum, and features two male USB-C connections sticking out of its side.

Using the HyperDrive involves plugging its USB-C connectors into the two USB-C ports on the side of the 2016 MacBook Pro. Although the device is designed to look best when plugged into the left side of the machine, it’s totally possible to turn it around and plug it into to right side of a MacBook Pro featuring four USB-C ports.

Hands on with HyperDrive

Once connected, a small blue LED light will shine to indicate successful connectivity with the MacBook Pro. From there, it’s just a matter of connecting your favorite devices to the HyperDrive’s various ports and slots.

I put the HyperDrive through its paces and tested the two 5Gbps USB-A ports, the SD Card and microSD slots, HDMI, the Thunderbolt 3-enabled USB-C port, and USB 3.1 USB-C port.

The situation with the two USB-C ports is a little odd, because only one is Thunderbolt 3 enabled. This means that you’re essentially sacrificing one Thunderbolt 3 port and reducing it to a USB 3.1 gen 1 port. The USB 3.1 port is limited to 5Gbps, which is a far cry from Thunderbolt 3’s 40Gbps. 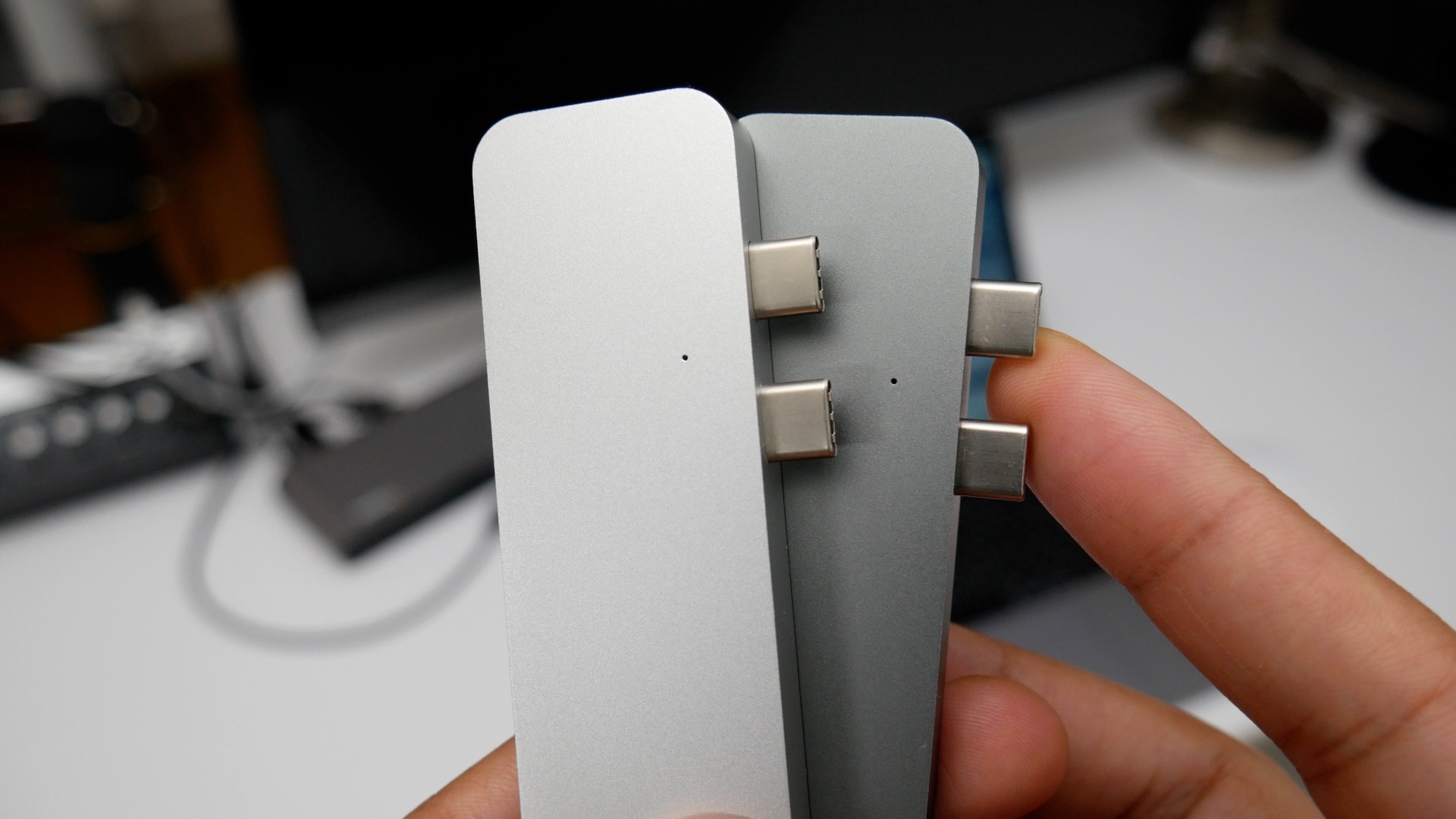 Power delivery is another thing you’ll have to consider, as charging is only possible when using the Thunderbolt 3 port, which can make things a bit awkward when using the HyperDrive on a MacBook Pro sans Touch Bar with only two USB-C ports.

In other words, if you using the non-Touch Bar MacBook Pro, you can’t charge if you’re already using the hub’s sole Thunderbolt 3 port with another accessory that doesn’t offer passthrough charging. The company told us that it opted to leave out the necessary circuitry required for making the USB-C port a charging port in order to maintain the compact size of the hub that would have otherwise been much larger.

That said, you do get full power passthrough, which means that I can charge my 13-inch MacBook Pro at full speed since the device is able to pass through the full 60W power requirement of the 13-inch model. 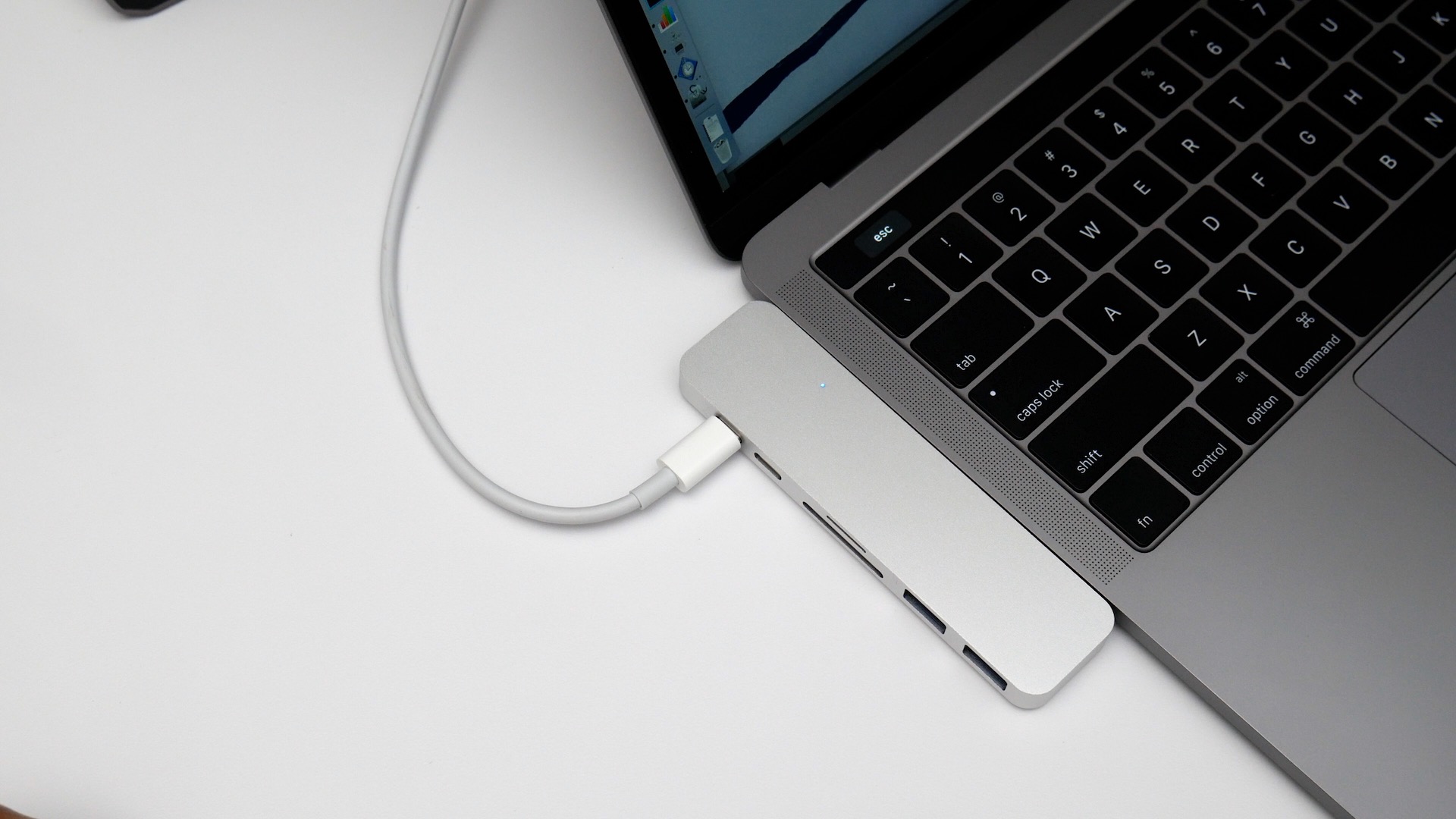 Owners of the larger 15-inch MacBook Pro will be happy to hear that the HyperDrive is capable of passing through the full 100W made possible by the USB Power Delivery spec, so it should have no trouble providing the 87W of power requested by the larger machine. 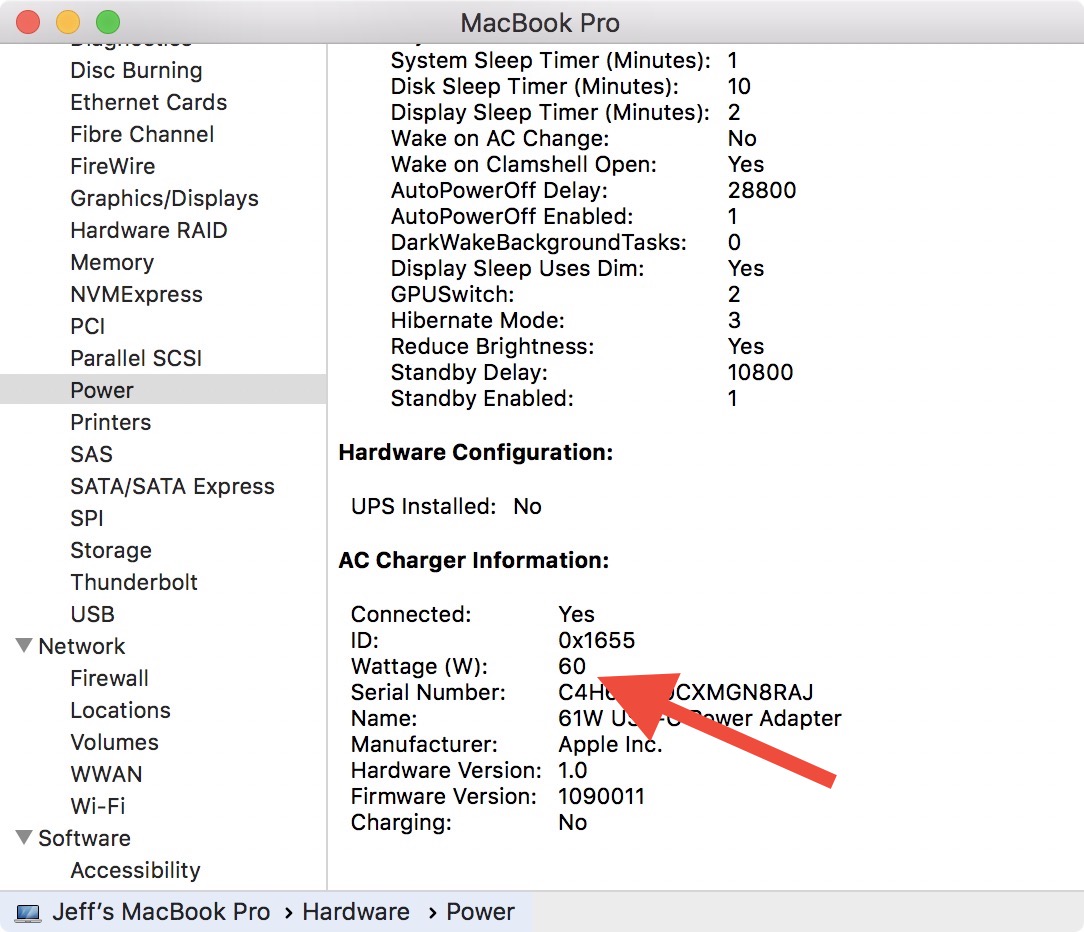 The nice thing about the HyperDrive is that you gain all of this extra I/O without having to give up the two USB-C ports on your MacBook, although you are giving up the I/O of one of the Thunderbolt 3 ports. 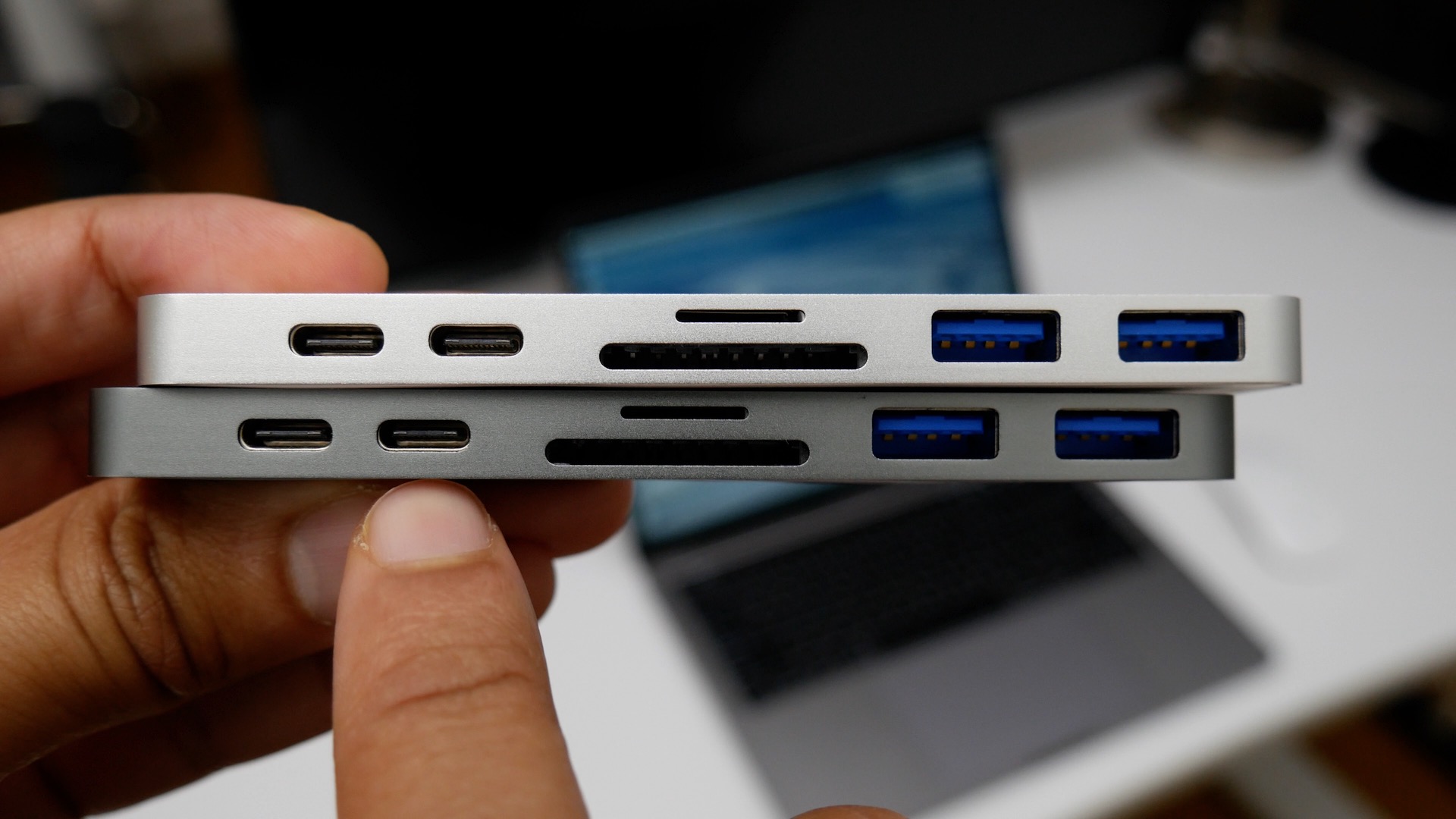 Unfortunately I don’t have a pure Thunderbolt 3 display to directly connect to my MacBook Pro, but I was able to test Thunderbolt 3 connectivity with the StarTech Dock that I talked about in a previous post. With this setup I was able to obtain full 4K output at 60Hz while routed through the HyperDrive, and was able to retain the full bandwidth of the other ports available on the hub. 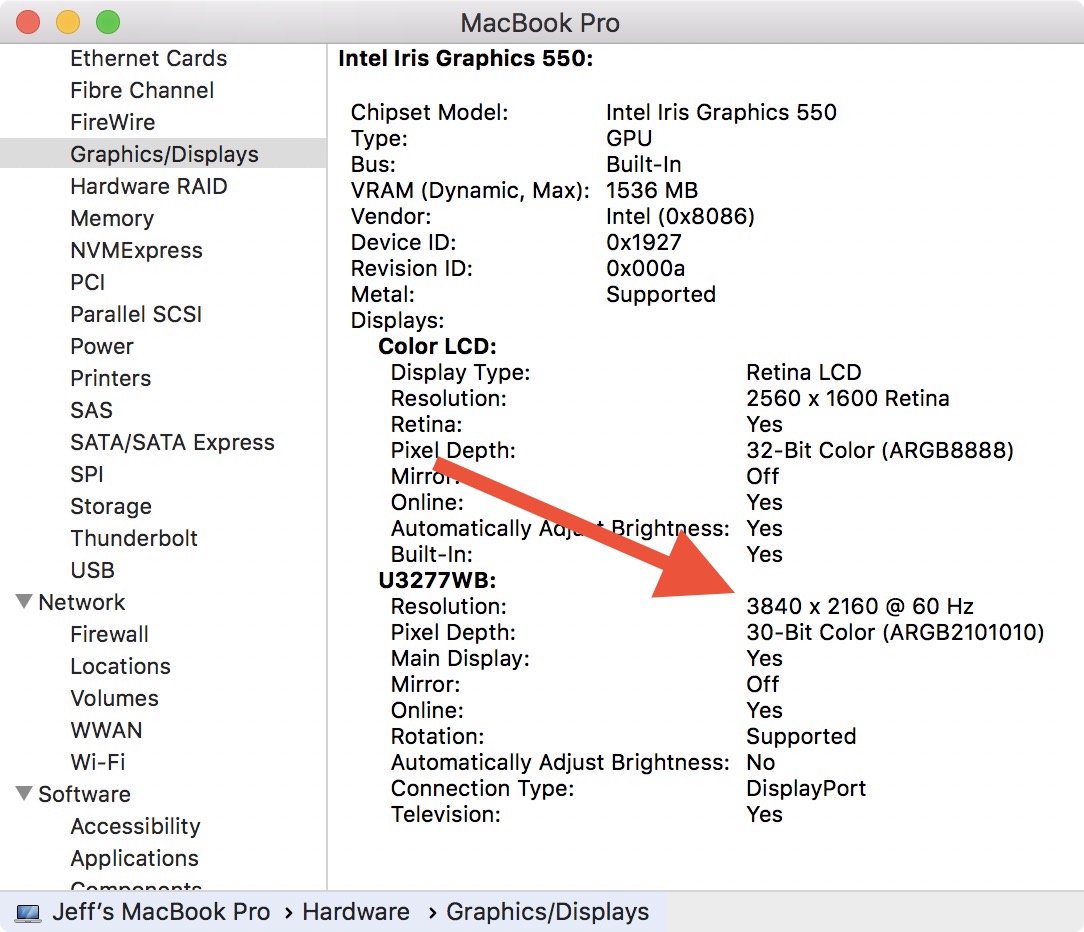 Again, this is just a test product, so it’s not perfect at the moment, but Hyper has already made significant improvements to the device’s build, and the technical aspects will no doubt follow this same path. 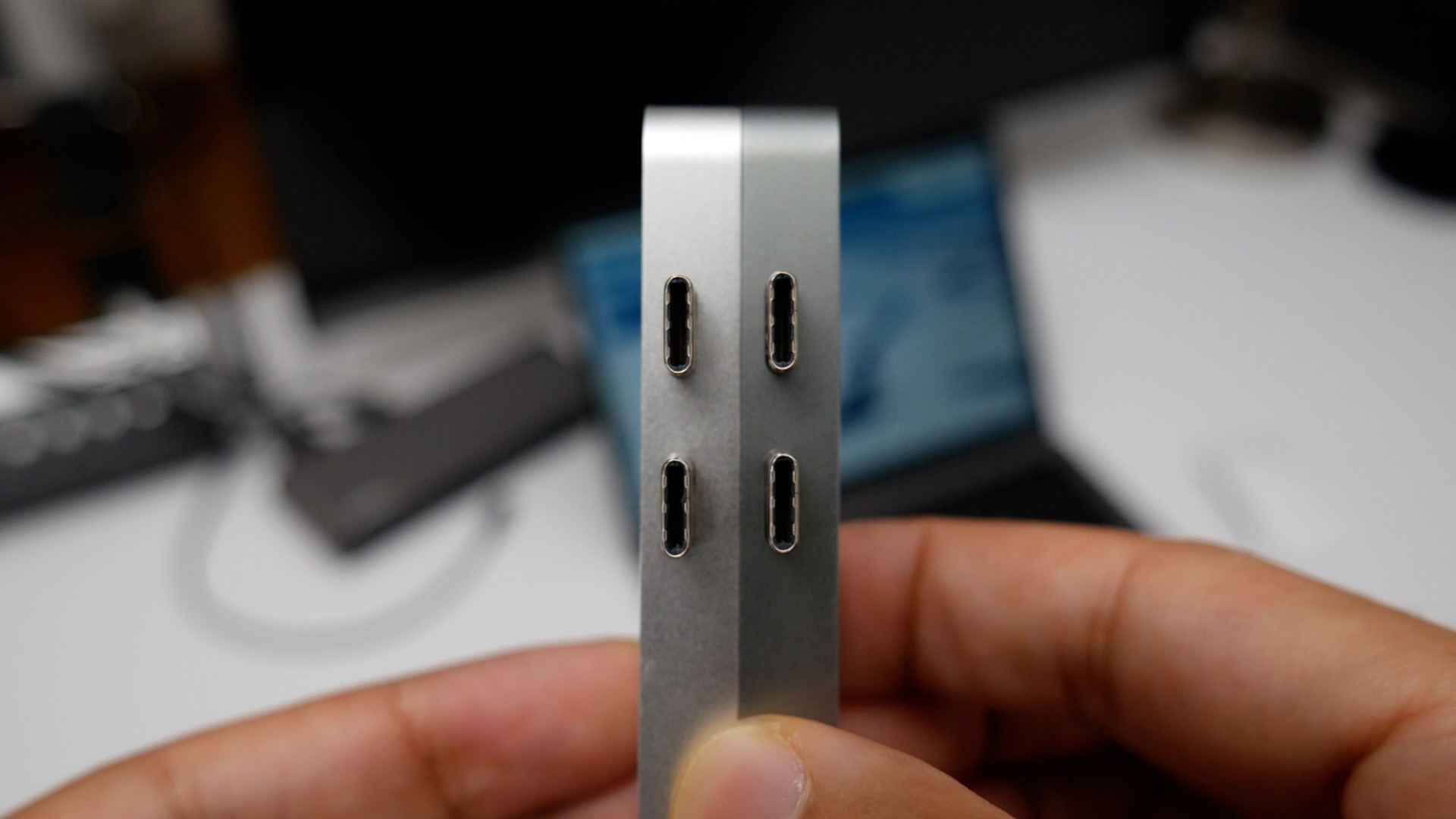 For example, the almost-finished, fully-functioning model that I’m currently testing doesn’t sit flush with the side of the MacBook Pro, but Hyper has already made changes to its design to ensure a flush fit with shipping models. Hyper has also made improvements to the bottom of the device, which will feature a better looking rubber non-slip surface.

I look forward to going hands-on with the final product in the near future. As of now, it has its idiosyncrasies, but I can state that this looks like a very promising MacBook Pro peripheral that users should keep a look out for.

Keep in mind that the HyperDrive is still in production and has just launched on Kickstarter, so the areas discussed in this overview are subject to change. That said, one should expect the device to look largely like the version previewed today.

It’s encouraging to see that Hyper is willing to allow us to go hands-on with the product prior to its campaign being launched, which should instill confidence in potential backers that the product will come to fruition. And Hyper isn’t a new name on the Mac scene either, as its parent company, Sanho Corporation, produced the popular HyperJuice battery pack for MagSafe-adorned MacBook’s of the past.