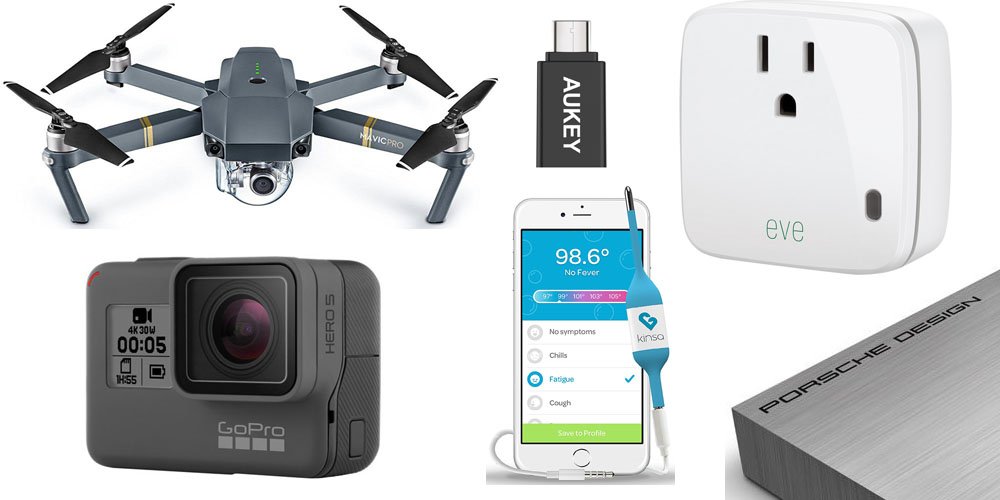 Yep, that time is approaching again, and I’ve rounded up some of my recommendations for the technology lovers in your life. There’s of course a strong Apple focus, but much of the kit can be used with other ecosystems or, indeed, on its own. And if you’re wondering about the absence of any audio kit, I’ll be pulling together a separate premium audio guide later this week.

I’ve aimed to include both a variety of tech – from the purely fun to the more functional – as well as a range of price points, from primary gift for a partner or someone else close to you down to stocking-fillers. It encompasses everything from drones down to USB-C cables …

I don’t think we need spend much time on Apple kit – if there’s anything 9to5Mac readers know well, it’s that. But there’s no doubt that one of the new(er) MacBooks would go down extremely well, whether it’s the 12-inch MacBook or new MacBook Pro. Older models are still widely available.

An iPad, iPhone or Apple Watch are other obvious (and generous) Apple gifts.

If you’re buying for someone who already owns all the Apple products they want, then there are of course a whole bunch of accessories you can look at, from Watch bands to MacBook cases and bags. So I’ll start by covering off a few of these … 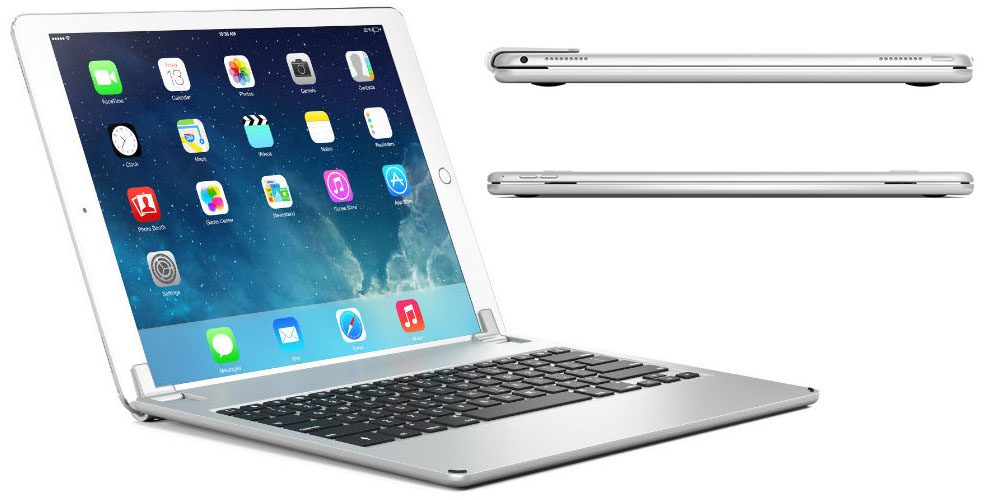 If you know someone who uses as iPad extensively, either as their primary device or as their go-to mobile one, an accessory which makes a huge difference to usability is an external keyboard. Not only does it dramatically boost typing speeds, but it also avoids covering up half the display with the on-screen one.

My favourite external keyboards by far are Brydge ones. These really look and feel like they could have been made by Apple, with keyboard feel very similar to Apple’s classic chicklet keyboards. They are available for all iPad models from the mini 1/2/3 (review) through the Air/Air 2/9.7-inch Pro (review) to the 12.9-inch Pro (review). Note that the company has separate listings for different colors, so make sure you’re ordering the right one. 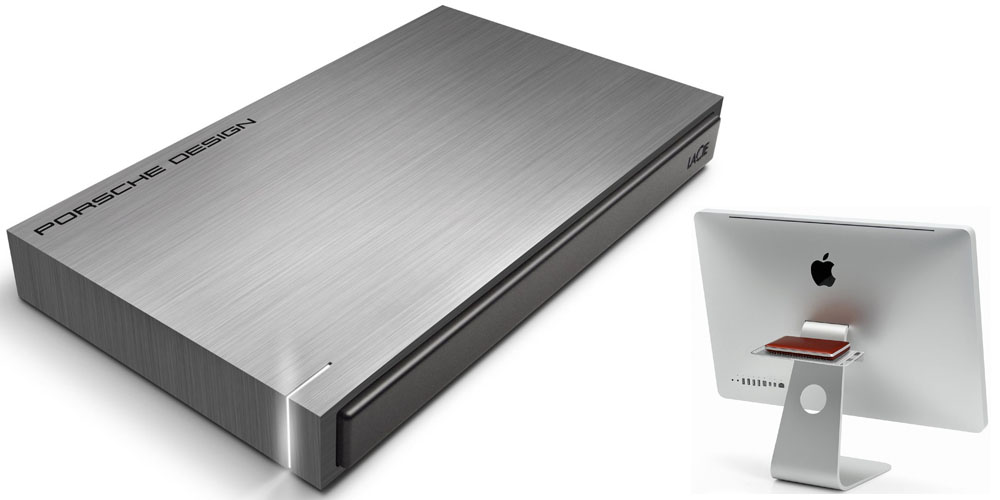 Probably the biggest favor you could do for a non-tech friend or family member is to ensure they are backing up their Mac. It’s scary, even among writers and photographers, how many don’t. They are just one drive failure away from losing their novel or lifetime’s photographic work.

At the budget end of the scale, a simple USB hard drive will do the job, while you can go all the way up to Thunderbolt SSDs for the fastest-possible access at an eye-watering price. Always go for known brands: G-Technology, Hitachi, LaCie, SanDisk and Western Digital are all brands I trust (I’m a little bit more nervous about Seagate …).

In terms of specific recommendations, the LaCie Porsche Design P’9220 1TB is a drive with decent capacity and great looks for less than $80. If they use an iMac or Apple display, you might want to throw in a TwelveSouth BackPack to store it. Speaking of which, I’m a big fan of TwelveSouth accessories in general, so you might want to check out their range for inspiration.

If you’re up for spending rather more, a Time Capsule is the best backup solution of all for a non-techy as it automatically backs-up once an hour via WiFi, so you don’t need to rely on them remembering to do it. Prices there start at around $230.

Drones – or quadrocopters – are one of the hottest new product categories in recent years, and the biggest transformation this year has been in price and portability. Previously, getting a really capable drone with intelligent flight modes, 4K camera and 20-minute flight times meant spending several thousand dollars on a model you wouldn’t exactly carry casually on a cycle ride or ski trip.

These days, though, a thousand bucks will get you something suitable for would-be film-makers, and small and light enough to be carried with you on your outdoor adventures – while just fifty bucks will get you a decent entry-level model.

The bad news here is that there were two really hot new contenders at the high end, neither of which can now be bought as a holiday gift: the GoPro Karma and the DJI Mavic Pro. The Karma, though, was recalled after they started falling out of the sky, and the Mavic Pro has been delayed into January.

However, if you know someone who would love one, and if your budget runs to a cool $999, they probably wouldn’t mind an IOU until mid-January. The DJI Mavic Pro is currently available for pre-order.

For more casual fun, around $50 will get you one with reasonable flight times and a basic camera. The best budget model is the Syma X5C. They will crash it, and the batteries don’t last long, so I recommend including a spares kit and extra batteries. You’ll still walk away with change from $100.

Another product category which has seen some pretty significant developments since last year has been action cams.

The hottest new kid on the block is the GoPro Hero5 Black, which combines 4K video and 12MP stills with built-in display and the ability to control it from an iPhone in a unit that is fully-waterproof without a casing. At $399, it’s not cheap, but it is the undisputed leader in the field.

If you want to spend less, but still give access to the full range of GoPro accessories, there are a whole bunch of GoPro clones of all levels of both price and quality. Some are truly dire, but I’ve been playing with the Yi 4K Action Camera, which comes remarkably close to the real thing at a somewhat more affordable $250. You’ll want to spend an extra seven bucks to convert the tripod mount to a GoPro one.

Older GoPro models are another option here, but I would say that 4K is now table stakes in the action cam world.

If you’re buying for people who aren’t hurling themselves down mountains or kayaking through rapids, then the 4K camera they already own may already be all they need. But if they have film-making ambitions, a mobile gimbal will turn their iPhone into a true cinematic camera. The DJI Osmo Mobile is the market leader here, at around $230, while the Zhiyun Z1 is another popular option but only around thirty bucks less.

Smart home technology has now made the transition from the domain of geeks to mainstream products. And these days, HomeKit lets you control everything via Siri.

Philips Hue is the leading smart lighting system, and the White and Color Ambiance Starter Kit is a good place to start, comprising three light bulbs plus the latest bridge needed for HomeKit compatibility. That link is to the 3rd-gen model, so be careful as there are plenty of older versions still being sold.

For controlling almost anything else, the Elgato Eve Energy is a smart plug socket. Plug in a table lamp, fan or anything else and you can control it via an app or use the Home app to get voice control via Siri. Again, the link is to the latest model, which costs around $50 and will be available from December 10.

The August Smart Lock turns almost any standard deadlock into an iPhone-controlled smart security system. Doors automatically lock and unlock as you leave and arrive, you can create additional ‘keys’ for anyone who needs access to the home, including temporary passes. Once more, beware of older models – the link is to the latest one. Price around $200. 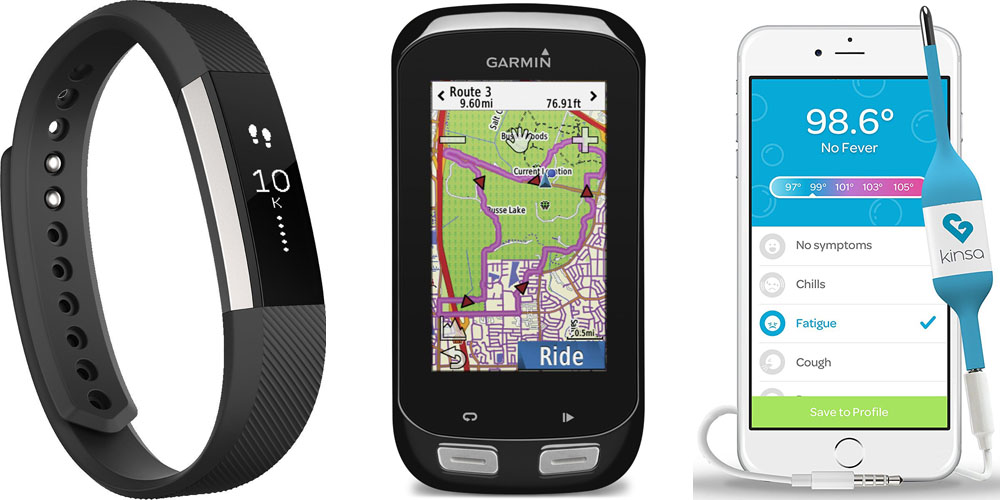 I can remember when running with an iPod strapped to your arm was the height of tech-enabled exercise. These days, it seems there’s scarcely anyone out there without a smartwatch or fitness band strapped to their wrist and wireless headphones beaming music from their iPhone.

We’ve already mentioned the Apple Watch, with the waterproof Series 2 the obvious choice for an Apple fan. But there are other worthwhile options out there. The Fitbit Alta is a very neat, unobtrusive fitness band that also supports notifications, and is a more budget-friendly option at around $130. Garmin also has a great line-up, with options at every price-level. The original Vivoactive is a popular choice, offering a color display and notifications in a capable $130 unit. The Vivoactive HR GPS adds accurate heart-rate monitoring, at around $220. At the top end, is the Fenix 3 HR, which is a serious gift for serious athletes, at around $500.

For cyclists, the Garmin Edge 1000 is the ultimate combination of cycle computer and GPS, but is also a heavy-duty gift at around $500. But for those who already have an iPhone, the Quad Lock system is a great way to carry one on a bicycle. For most bikes, the Front Mount will be the best option, coupled to the right case for their phone. All in, you’re looking at around $70-90.

But health tech can cost even less. The Kinsa Smart Thermometer is a gift any parent would appreciate. It’s an FDA-approved, pediatrician-recommended thermometer suitable for everyone from babies to adults. The connected app uses measured temperature and symptoms entered on the iPhone to provide real-time guidance from trusted sources such as the Mayo clinic. The price? Less than $20. 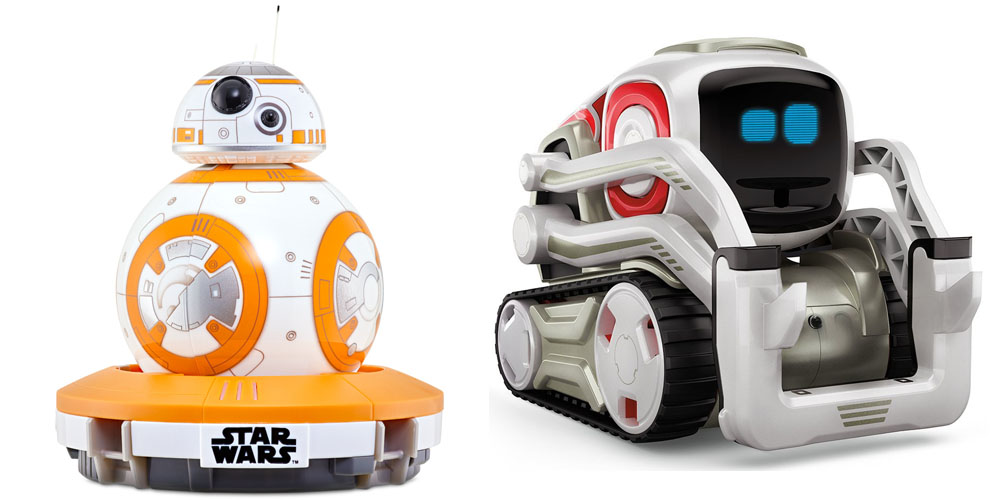 For kids – including grown-up ones …

Some of us are never too old for toys, and if that toy is a sophisticated AI-driven robot, what’s not to love?

The Star Wars ‘app-enabled droid’ BB-8 has been one of the best-selling toys this year, responding to a mix of voice commands, iPhone control and gesture control via the optional Force Band. The BB-8 can also operate autonomously, and its behavior adapts to the ways in which you interact with it. It costs around $130 on its own or a little over $200 with the Force Band.

Back in 2013, Apple turned the Anki Overdrive AI-driven racing game into an overnight sensation. If you’re looking for a gift for someone who still enjoys theirs, you can get a range of add-ons for the kit, including additional track and cars. But the latest Anki offering is the Cozmo robot. Like BB-8, Cozmo combines the ability to explore on its own, Anki claiming that it exhibits curiosity regarding its surroundings, as well as allowing you to control it directly with your iPhone. However, this is a major present: you won’t see much change from $500 for this one! 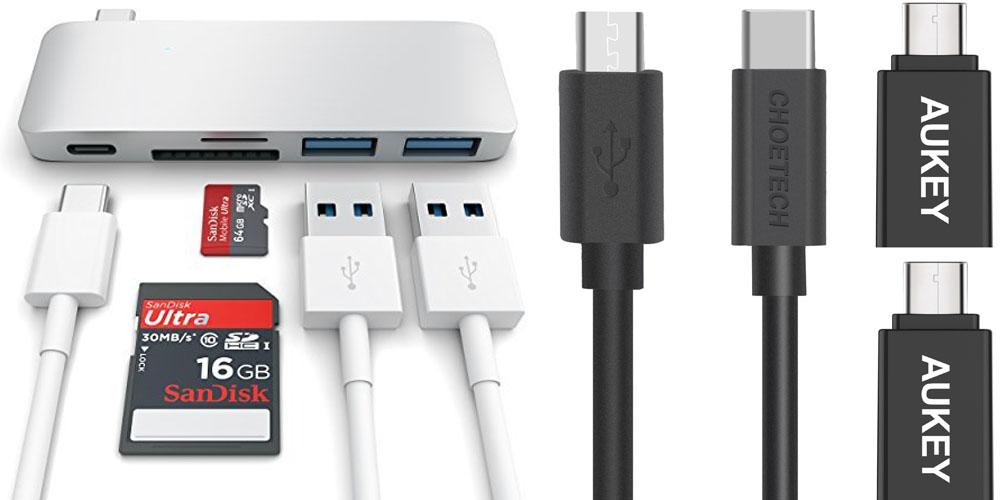 Finally, for the new MacBook Pro owners in your life, the switch to all-USB-C/Thunderbolt 3 ports is likely to require a few new cables or adapters. An obvious choice here is USB 3.0 to USB-C adapters, whether the official Apple one ($9) or a good third-party option like the Aukey two-pack ($10) or Choetech three-pack ($10).

But in most cases, a replacement cable is a neater solution than an adapter. Apple offers its own USB-C to Lightning cable ($19) to connect an iPhone or iPad, while there are third-party options for USB-C to microUSB, like that one from Choetec ($6).

Another option – and perhaps a more impressive-looking gift – is the very neat Satechi dock, offering USB-C pass-thru power, two USB 3.0 sockets as well as card-readers for both SD and microSD cards, available for around $45.

If you have any other suggestions, let us know in the comments, and I’ll add the most popular choices to the guide in a ‘reader picks’ section.