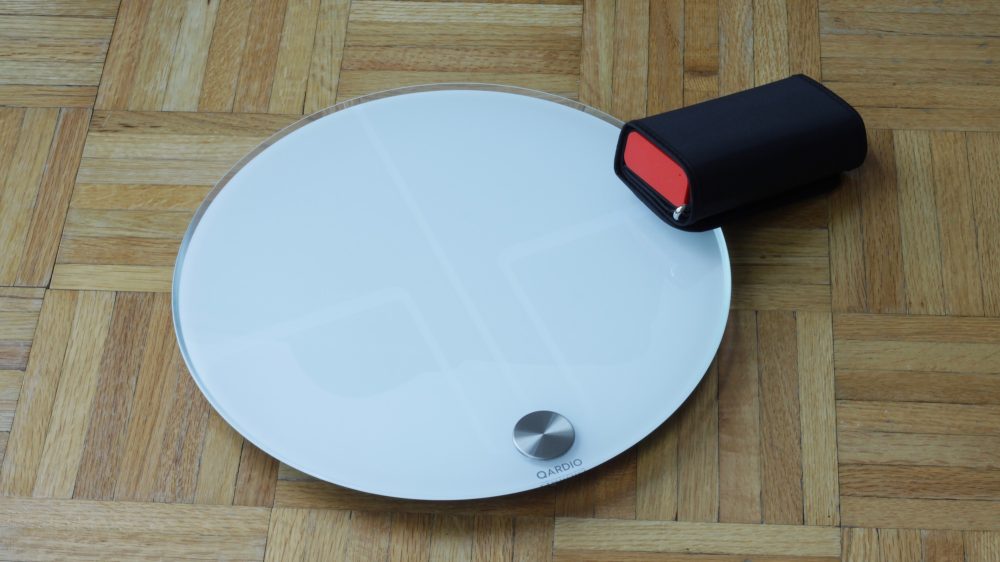 I’ve been a major fan of Apple’s Health app since its original launch and have continuously looked for reasons to use it. I believe that the first step to a healthy life is being proactive versus reactive, which is why my interest was piqued when Qardio reached out asking if I wanted to review their QardioArm and QardioBase products. A smart portable blood pressure monitor, and a smart scale was something that definitely fit into my “DIY preventative care” ideology. Qardio’s products are designed to fit into a modern health focused lifestyle, but let’s see what that means for the product’s themselves.

Starting with the QardioArm, I have to say that a smart blood pressure monitor was something that I totally forgot even existed until Qardio reminded me that they made one. I always saw the supermarket kiosk blood pressure machines as death traps for your biceps, but the curiosity of a medical grade portable one always existed in me. I had long ago started recording my results after every doctor appointment, but the QardioArm brought that experience conveniently in my own home. 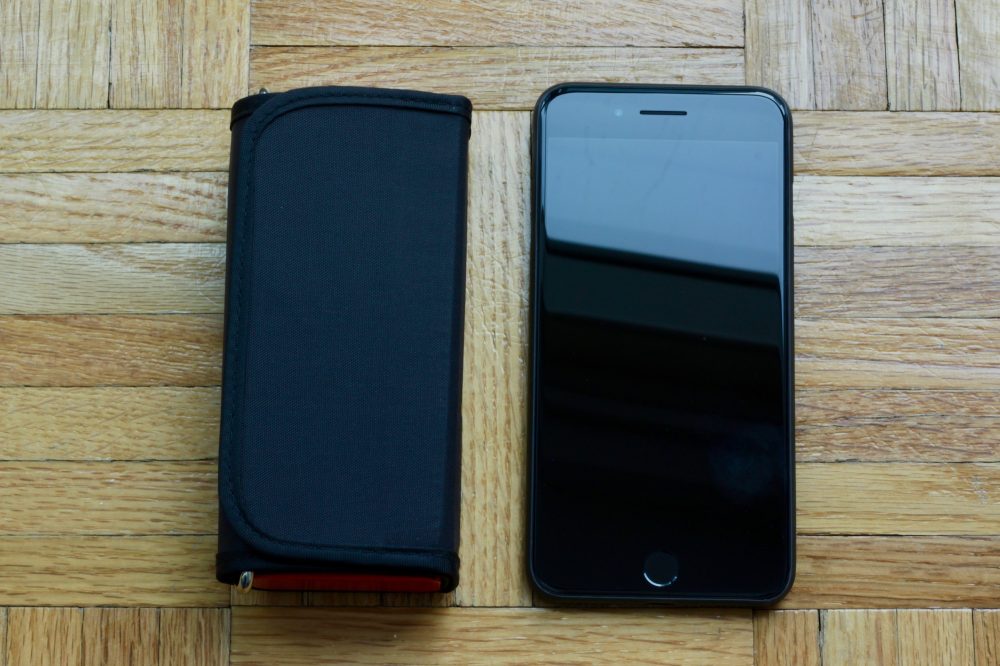 QardioArm size comparison to the iPhone 7 Plus

Qardio states that the QardioArm blood pressure monitor can get you “medically accurate results with the touch of a button”. Armed with that knowledge I expected it to be a large device in my unboxing experience, but I didn’t expect it to be as small as it was. Yes, it was “large” for something being deemed portable, but it was still portable enough for me to throw in a coat pocket or at the bottom of my backpack. The ability to get the same data I would from a doctor was very appealing to me.

The QardioArm consists of a small plastic box, where the device’s components are all located, and a comfortable arm strap that wraps around your arm just above the elbow crease. Once on my arm, it really did feel like just being at a doctor’s office. 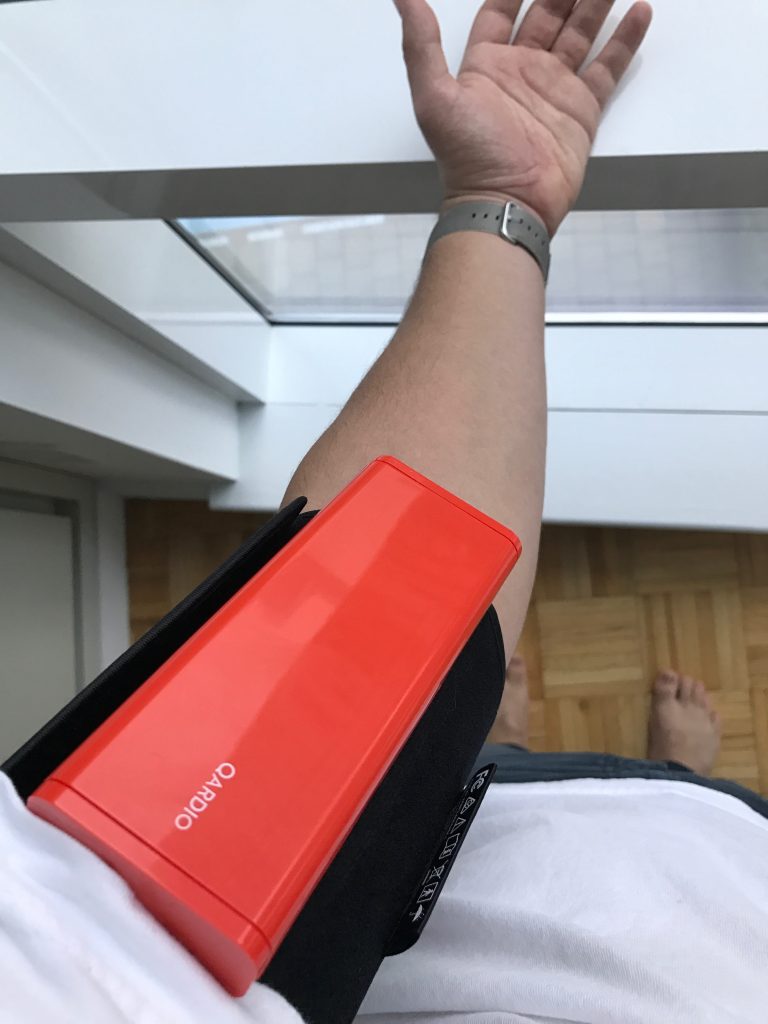 Once I hit the start button in the app, I didn’t expect the device to respond as quickly as it did considering it *is* Bluetooth, but there was no delay. Once started, I could feel the area just below the plastic box inflate like a balloon and begin to put pressure on my arm. The app updates live as the data is collected giving you a preview of what the final results might before even before it finishes. Just as I thought the seemingly invisible balloon applying pressure was going to pop, it stopped, and the app immediately provided me with the data.

Once the process was completed, the Qardio app showed me my systolic, diastolic, and pulse data. With a swipe, I was instantly able to get a clear understanding on how my measurements lined up on the World Health Organization chart indicating whether I was in an optimal, normal, high, or hypertensive state. Everything tracked by the QardioArm is fed back into the Health app for syncing across any other HealthKit compatible apps.

I tested the QardioArm on a wide variety of family members, from mid-20s to 80s and everyone was impressed and overall agreed that the results they saw aligned with what their most recent doctor’s appointments concluded. Everyone agreed that the pressure applied was incredibly surprising, not because it hurt, but because they didn’t expect a small device to be able to accomplish what it did. 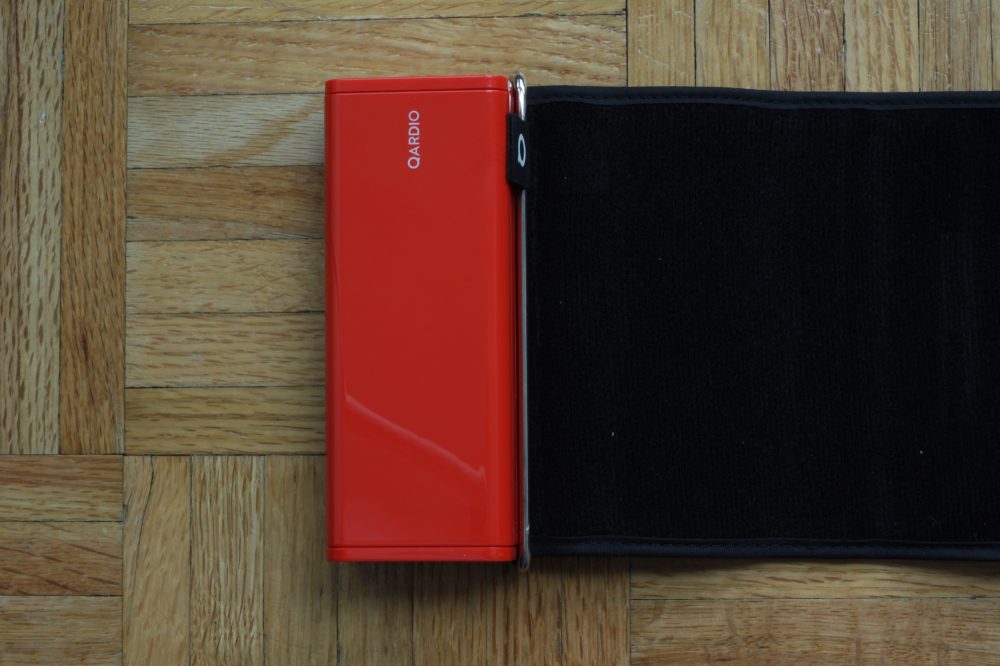 The one downside I did have with the QardioArm was that to operate it, it required four AAA batteries. The device automatically powers on and off when opened and closed, so that was a nice touch for battery conservation. The QardioArm does include the batteries on purchase, but just the thought of having to replace them in the future was a bit of a let down. According to QardioArm’s support information, the batteries in the device should last for twelve months. Other than that, I’d say the QardioArm passed my expectations without a doubt. I’d recommend it to anyone looking to keep an eye on their blood pressure, either because of medically diagnosed needs or just preventative care.

Having written about automating weight logging a few months back, I never stopped looking for a smart scale. The QardioBase filled that void nicely by providing a sleek and modern package in which to track multiple aspects of my weight and body composition.

One of the most annoying parts of getting into a fitness routine is looking down at a scale and realizing that the number hasn’t gone down. Unfortunately what most regular scales don’t tell you is what else is happening in these situations. Yes, your body weight might have gone up, but your fat percentage might have dropped, as your muscle mass went up. These stats are crucial not only for the fitness minded, but for truly understanding what happens to your body day-to-day. 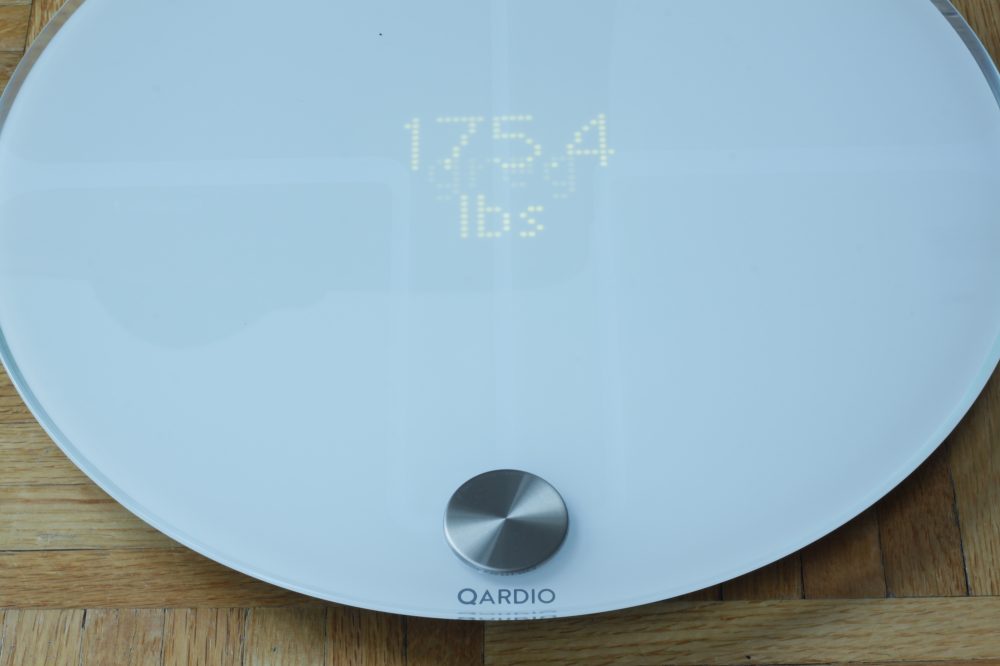 Looking at the scale can sometimes be depressing and unnerving when you don’t feel like you’re truly hitting your goals. QardioBase was kind enough to include a feature called “Smart Feedback” that helps with these feelings. Instead of seeing numbers, a user sees one of three smiley faces on the green LED display indicating their progress towards their individual goal. I found myself using this instead of the numbers because I personally *did* find myself in a sad cycle of not feeling as though my numbers were improving. It’s a small user interface design choice, but one that can definitely help users feel better about their health improvements. 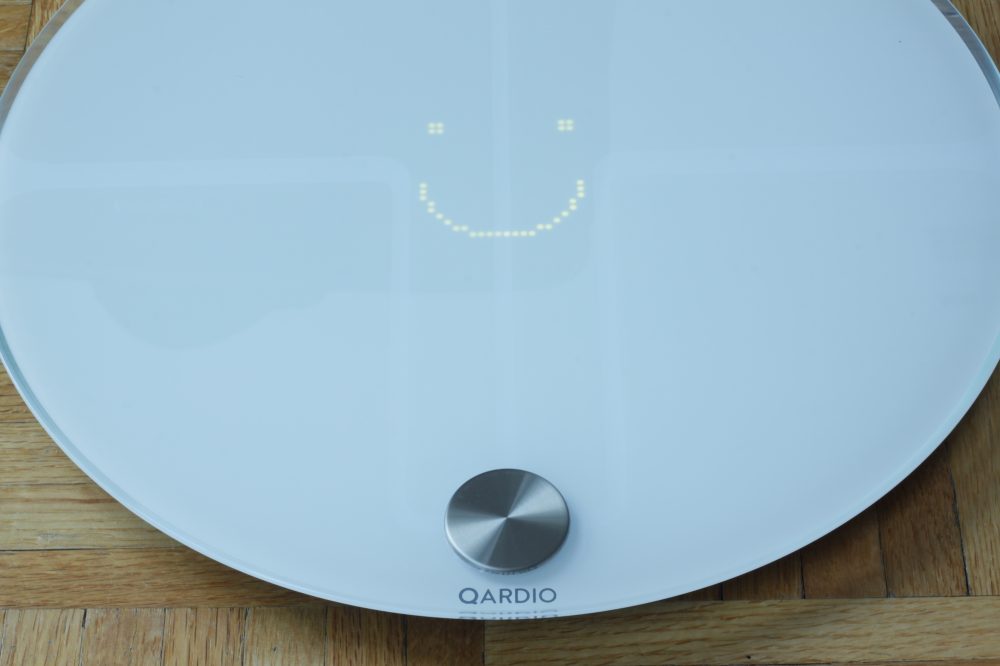 Another favorite feature of the QardioBase was the haptic feedback that let me know when my measurement was taken. As silly as it was, it was a nice touch that made me feel like “Yes, I did just step on that scale properly.” Whenever I felt that small vibration I knew it was safe to step off the scale and keep an eye out for the incoming data.

Qardio’s official app is the central hub used for both the QardioArm and QardioBase. It’s an app focused on each device’s function without cluttering the experience. User’s can also check for firmware updates for the QardioBase, follow friends and family’s data, and look back through past collected data. While I usually rely on the Apple’s own Health app to look back at my data, having a clean experience in the products’ own software is much appreciated. Like the QardioArm, QardioBase’s data syncs with the Health app which helps when tracking my stats into third-party fitness apps like MyFitnessPal. 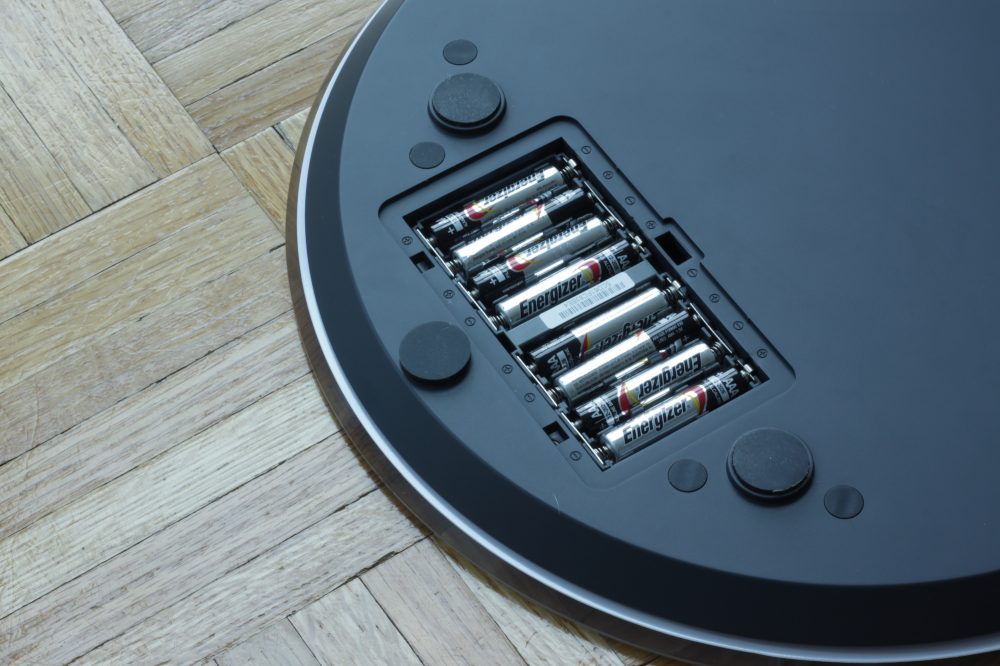 Similar to the QardioArm, my biggest complaint with the QardioBase is that it requires traditional batteries, and not rechargeable ones. This became especially annoying when I realized it needed not four, but eight AAA batteries. The QardioBase’s support article also indicates that under normal usage the battery should last for twelve months. I understand the QardioArm not opting for a rechargeable battery because of the device’s size, but the QardioBase seems like it had more than enough room for it.

Initial configuration of the QardioBase was also tricky when connecting to the local Wi-Fi network. I spent nearly 30 minutes attempting to get it to connect, each time the app would simply time out during the setup. I appreciate the scale’s use of Wi-Fi over Bluetooth, but I still felt the setup issues could’ve been ironed out. These issues aside, I’d recommend the QardioBase for anyone looking for a sleek and friendly smart scale for their home. While many smart scales follow a square design, QardioBases’s circular design is a decidedly more attractive style in my opinion. 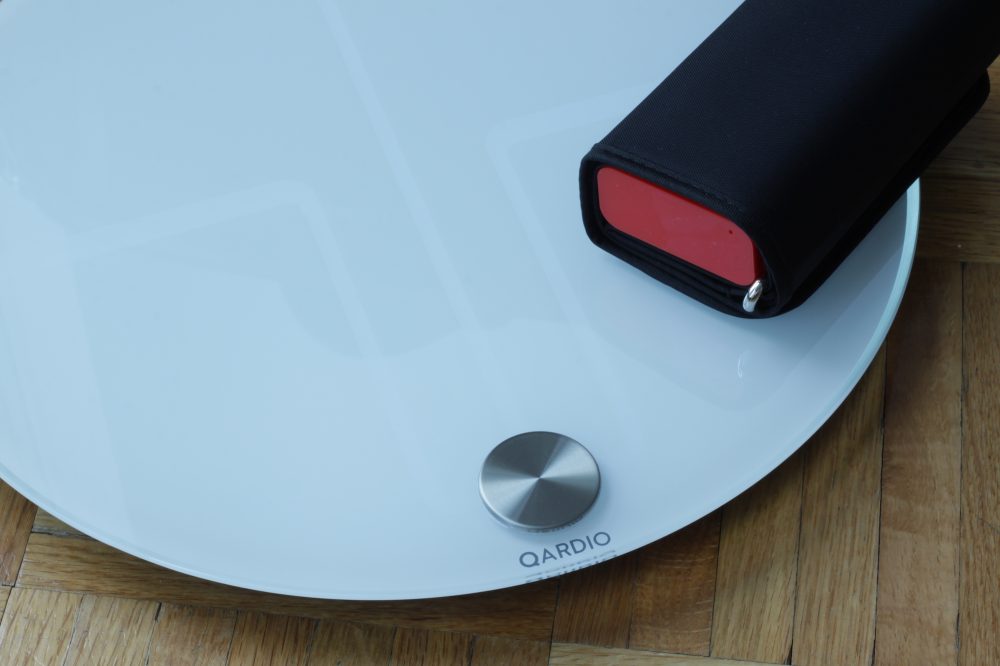